‘T: An MBTA Musical’ Ultimately Flies Off the Rails 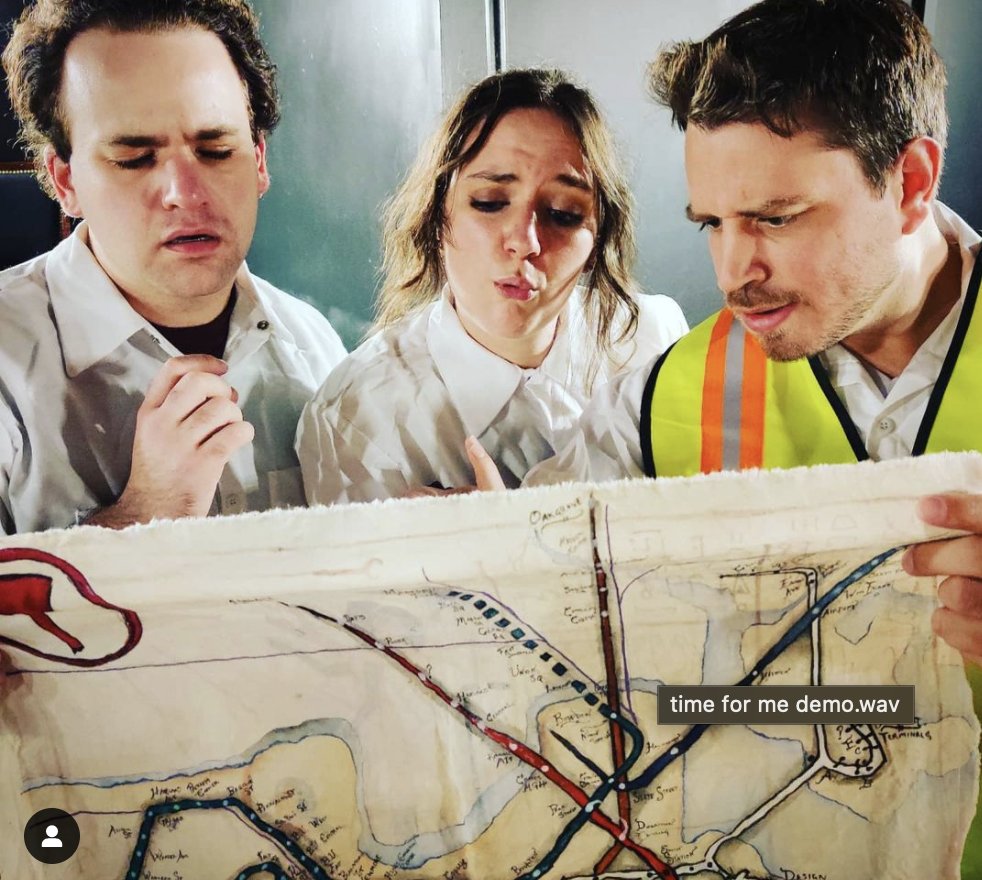 Inside a T station, nearly anything goes: shirtless men doing flips from the subway poles, angry evangelical preachers passing out pamphlets, intoxicated college students holding in various bodily fluids at once, people risking their lives to sprint across tracks just to make their commutes on time, and, of course, rats. For a storyteller in need of inspiration, then, Boston’s public transportation system is a setting with nearly infinite possibilities that grants any writer powerful artistic license.

As such, “T: An MBTA Musical,” running every first and third Friday through December at The Rockwell, is based on a golden premise. Staged mere feet from the Davis Square T stop, the goofy and spirited show follows three 20-somethings navigating the maddening inconveniences of the MBTA and teaming up to bring down the institution from within, a journey marketed as “part love story, part melodrama, part scavenger hunt — but mostly underground.” Unfortunately, despite its potential and the abundance of energy from its cast and band, the end product fails to live up to three out of four of those key descriptors (though it is, admittedly, staged underground in the basement of the Rockwell). Even in such a surreal and unpredictable location as the T — the ultimate suspender of disbelief — the plot veers into baffling and, many times, unnecessarily sexual directions. Despite their best efforts, the actors’ enthusiasm cannot steer it back on track.

The musical’s three protagonists, Alice, John, and Michelle, have all been harboring personal vendettas against the accursed MBTA when they happen upon a mysterious treasure map that might lead to the transport authority’s darkest secrets. Their mad dash across various T lines to evade the MBTA cops doubles as a metaphorical journey of self-discovery, even if the specifics of the narrative become increasingly contrived and off-putting. Alice, for instance, comes from a long line of MBTA criminals who have a habit of punching T workers, a bizarre family legacy she’s trying to escape. With an incredibly minimal set of some chairs and painted signs, the actors’ performances as they run around the theater and interact with the crowd, as well as the sound cues of familiar subway noises and P.A. system, go a long way to invoke the claustrophobic, frenetic vibes of the T. A special shout-out is in order to the show’s ensemble, who seemed to be having the times of their lives every time they were on stage, and to composer Melissa Carubia for a score full of some serious earworms and impressively intricate melodies.

At its best moments, the show reads like a love letter to the Boston area, celebrating the chaos but also undeniable charm of many of its signature subway stations. The scene set at the Kenmore stop, where the trio encounters a crowd of drunk and boisterous Bostonians fresh from Fenway Park, for example, strikes the perfect balance between this affection for and mockery of the city’s culture. Even if the characters’ motivations for embarking on their subterranean scavenger hunt are murky and the payoff ultimately unsatisfying, the clues and riddles they discover along the way help pique the audience’s interest and keep them engaged.

In many ways, the T and its authorities make the perfect antagonists: Who doesn’t love to complain about the massive delay times, occasionally rude employees, and constant construction that haunt Boston’s public transportation? The animosity, however, is directed not at bureaucrats or government officials who leave the oldest subway system in the Western hemisphere poorly funded and run-down, but rather at the MBTA workers themselves, to such an extent that it often feels like the writers are punching down. Yes, taking the T often sucks, but basically every MBTA employee featured in the show is either a total buffoon, bumbling around like one of the Three Stooges, or a vindictive monster out to get the passengers, such as a banshee-like bus driver. By the end, in a moment of sudden self-awareness, the three protagonists realize they really ought to own up to their personal problems, rather than treating the T workers as the ultimate scapegoat. Yet, their last-minute epiphany that “we are all the T” doesn’t counteract all the insults hurled at the employees who have to put up with passengers like Michelle, Alice, and John’s nonsense on a daily basis.

Equally disappointing is the handling of Michelle’s character and her ham-fisted “romance” with John, the frat-boy with a secret “heart of gold.” The self-proclaimed “Queen of One Night Stands,” Michelle tries to distance herself from her promiscuous image while constantly navigating the wandering eyes of creepy men, including supposed “good guy” John. Early in the show, Michelle refuses to show an embarrassing, probably explicit video from her camera roll, much to pushy, insistent John’s annoyance. In a complete invasion of privacy, he steals her phone to discover that the video is actually her doing a comedy routine, a side of her personality she has tried to suppress. Still, the audience is supposed to continue rooting for this icky relationship.

All that being said, it’s hard to deny the entertainment value of this bonkers musical. It’s the type of performance that genuinely needs to be seen to be believed. There was never a dull moment in this romp, particularly during the catchy, choreographed group numbers. However, much like a street musician down in a subway station singing really loudly and out of tune, “T: An MBTA Musical” often felt jaw-dropping and hilarious for all the wrong reasons.