‘A Mouthful of Air’ Review: An Inadequate Look at Postpartum Depression 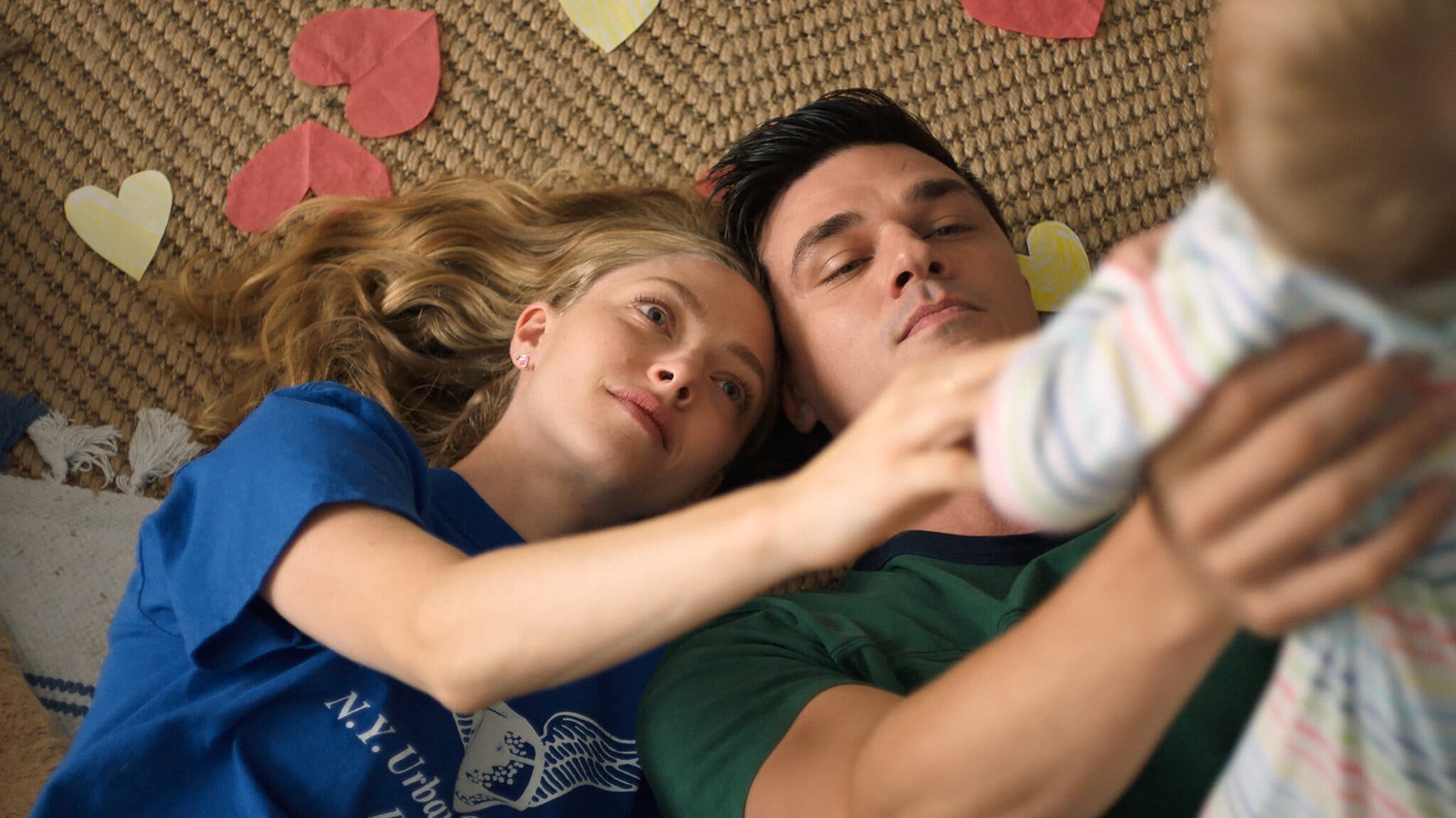 Amanda Seyfried and Finn Wittrock star in "A Mouthful of Air." By Courtesy of Sony Pictures
By Hannah T. Chew, Crimson Staff Writer

Audiences of “A Mouthful of Air,” Amy Koppelman’s deeply personal tale about postpartum depression, will likely want to leave with a greater understanding of such a complex and underrepresented issue. However, it is difficult to walk away from the nearly two-hour film without a distinct sense of hopelessness, disorientation, and uncomfortable despair. Based on Koppelman’s 2003 novel, “A Mouthful of Air” chronicles the struggle of new mother and children’s book author Julie Davis (Amanda Seyfried), who suffers from crippling postpartum depression and anxiety. In a candy-colored and sunlit 90’s New York partially sketched in crayon, Julie is submerged in a world of doubt and darkness, as the film opens with an unnervingly calm shot of her suicide attempt. While Seyfried proves to be a phenomenal actress, “A Mouthful of Air” is underdeveloped in every aspect from storyline to character development, failing in its sincere attempt to raise awareness of postpartum depression.

Julie is the focal point of the film, and Seyfried’s emotive face dominates nearly every shot. This focus benefits the film by avoiding the unnecessary graphics of suicide à la “13 Reasons Why” and showing off Seyfried’s dramatic range — but it also makes Julie’s lack of character development impossible to ignore. The film suggests, through blurry flashbacks and crayon animations, that Julie’s mental illness stems from a vague history of abuse and abandonment from her father. The backstory is never fleshed out nor adequately explained, undermining the film’s emphasis on how common and uncontrollable postpartum depression can be. Instead, Julie’s father is referenced in conversations with her mother for half the film before appearing without warning or closure in Julie’s suburban life for a few minutes of screentime.

The entire film feels like it’s walking on eggshells: Koppelman is worried about taking risks with such sensitive material and viewers spend the entire film waiting for Julie’s inevitable collapse. Julie’s conversations with her therapist (Paul Giamatti), her husband Ethan (Finn Wittrock), and her mother (Amy Irving) feel forced and scripted, every line drawn directly from a mental health PSA. Her therapist even quotes Sylvia Plath. While the film does depict some of the tension between the couple, Ethan’s character only begins to scratch the surface of the heartbreak in loving someone with mental illness. Their love, their narrative, and their learning go woefully underdeveloped, perhaps an unfortunate byproduct of the Julie-centric approach.

Crayon-drawn animations and Julie’s children’s stories are sprinkled throughout the film, providing some respite from the tightly framed close-ups of Julie’s despair. These short interludes are certainly better than the graphic depictions of self-harm and grief that Koppelman could have leaned on, but they do end up adding to the facile nature of the film.

While audiences may want to leave this exploration of postpartum depression as an ally, it can be difficult to critique the effectiveness of Koppelman’s film as someone who has never experienced motherhood or postpartum mental illness. But after watching two hours of traumatic pain end in what felt like Julie’s inevitable suicide despite external support and love, it is impossible not to feel hopeless and lost. In trading away nuance to avoid risks, the film fails to educate viewers on the complexities of postpartum depression and falls short of meaningful engagement. Viewers leave with more questions than answers and a vague feeling that they are subscribing to some terrible stereotypes. Instead, meaningful engagement with the film can occur outside of the theater. A single Google search can unearth an extensive range of personal accounts and lead to honest, eye-opening, and deeply moving reflections. But audiences shouldn’t be required to do research to understand a film.

— Staff Writer Hannah T. Chew can be reached at hannah.chew@thecrimson.com.