‘You’ Season Three Review: A Refreshing Look at Murder in the Suburbs 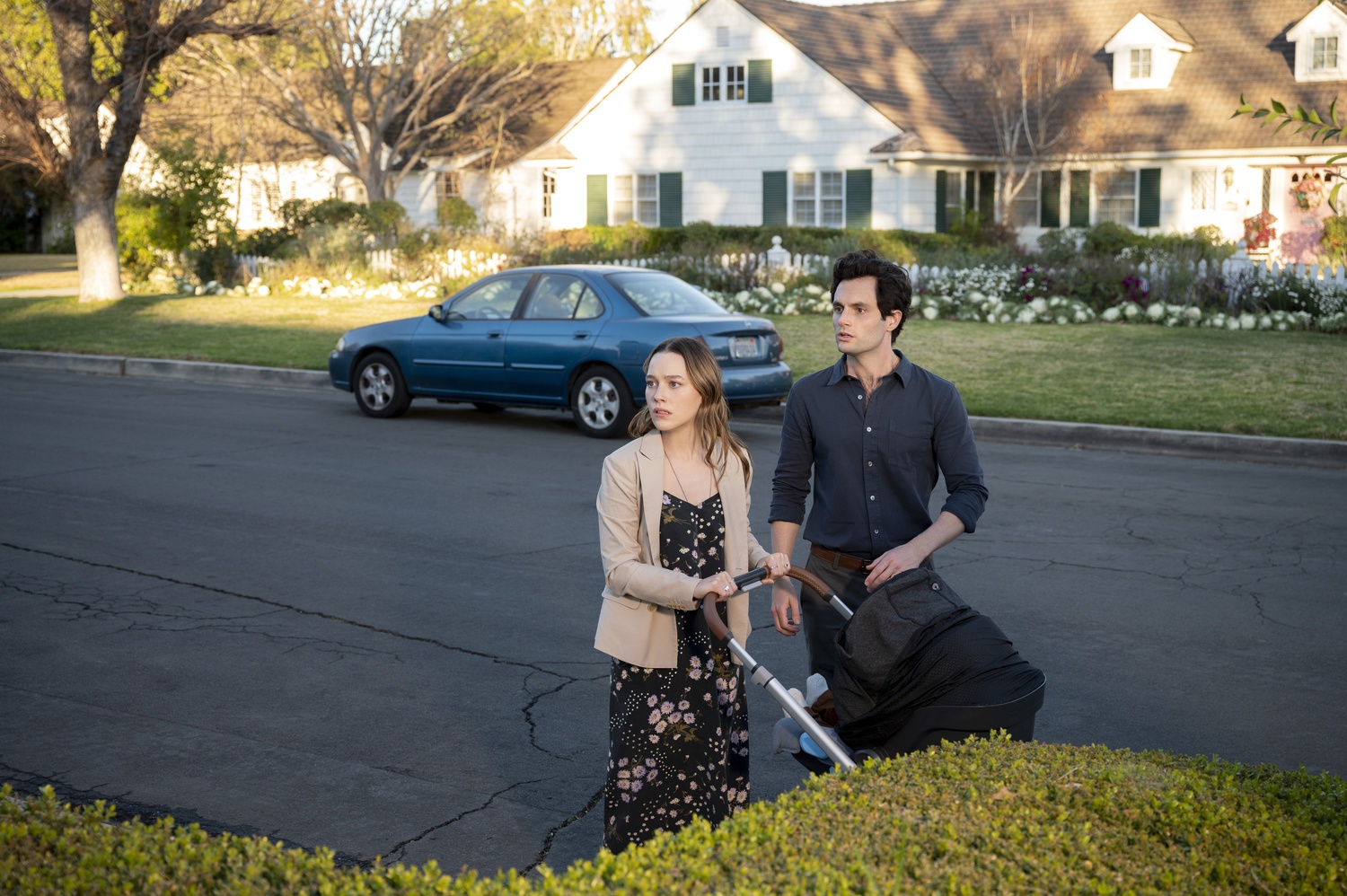 Victoria Pedretti and Penn Badgley in Netflix's "You" By Courtesy of John P. Fleenor/Netflix
By Monique I. Vobecky, Contributing Writer

You may wonder what can go wrong in a suburban Northern Californian town — however, when newlyweds Joe Goldberg (Penn Badgley) and Love Quinn (Victoria Pedretti) move in, it is no surprise that the resulting drama will be well worth the two-year wait for Season Three of “You.” Viewers should strap in and get ready for a season filled with Joe’s predictable violence paired with Love’s frustratingly self-destructive willingness to hit characters with blunt objects.

While falling out of love with his wife in their new home in Madre Linda, Joe preys on yet another woman that has caught his eye: his neighbor Natalie Engler (Michaela McManus). However, Season Three breaks from the typical “You” arc of Joe stalking his obsession for the entire season: Natalie lasts all but one episode before Love can get rid of the competition.

In the new season, viewers now have to juggle the emotions and killing sprees of two murderers, and it works in the show’s favor. Joe’s obsessions become bland and predictable as the season progresses, but the deepening portrayal of Love’s character provides the exciting mystery that audiences have come to love from the series. Love struggles not just with the expected troubles of suburban life but also conforming to the mold of her marriage and of womanhood — all while maintaining her status as Joe’s primary enemy in the show and a murderer herself. This is what makes Love the scary figure in the season — she is unpredictable. While the series previously focused on a nearly overdone view of Joe planning out his actions, Love has a spontaneous, vicious spirit that allows much of her violence to unexpectedly spring upon viewers.

Similar to Season Two, Joe is thrown into a new and unfamiliar environment that successfully switches the pace of the show. The setting of Season Three draws parallels to visions of destructive suburbia from films such as “Vivarium,” illustrating that, for Joe, the suffocating nature of the suburbs entraps him in a prison-like marriage. The claustrophobic atmosphere of this proverbial prison adds more depth to the show’s main theme of Joe trapping others in, as he finds himself in an inescapable situation for the first time.

In an MTV interview, Pedretti spoke about the dynamics of a married woman trying to fit within the confines of suburban womanhood, and how Love turns to violence to cope.

“She's really ready to lose her mind, and it's this little respite that allows her to build up her ego and her sense of value,” she said. As Love’s characterization becomes more complex, the show offers a unique take on suburban sexism, moving away from basic, stereotypical depictions of suburban idyll to show how Love turns to extreme violence to find her own value as a woman and mother.

The season reaches a fever pitch in one of the series’ most dramatic moments, when Love screams at Joe, “Why don’t you love me anymore?” in the pouring rain. This visibly dark scene brilliantly illuminates Love’s psychology, showing the roots of her insecurities. By placing Love in a high-risk scenario where she and Joe must find a place to bury Natalie’s body, the show does a great job of showing how impactful her neglectful husband’s behavior — combined with Love’s own insecurities as a wife — has been on Love’s sense of worth. “You” Season Three directly hits at these themes of value and insecurity within marriage that other shows seem to gloss over, and it is refreshing to see this raw, realistic struggle unfold.

This season also sees a delivery change that fits well with the unnatural setting: Joe speaks mainly in conversation with other characters, in contrast to the way his ominous private thoughts dominated the narrative in past seasons. Joe speaks the most with Love, tearing him out of the scheming world of stalking in his mind and into the present with his wife.

In contrast with the scenes of superficial suburban couples that add a sense of normalcy to the season, scenes of Love’s spontaneous killings occur at an unexpectedly fast pace. This distinction between the slow, boring nature of their town and the quick cycle of Love lashing out highlights Love’s inability to fit into the life she always wanted: a normal marriage with a loving husband. From her initiating an extramarital affair to murdering two people at the beginning of the season, Love quickly becomes the villain of “You.” The season flips the “enemies to lovers” film trope, giving watchers whiplash as Love becomes Joe’s rival. Furthermore, Joe shifts from fully focusing on his next obsession to saving his son from Love’s violence, adding a compelling additional dimension to his characterization.

While flashbacks are typically overused as a strategy to give backstory, the creators of “You” use them thoughtfully and sparingly to portray Joe’s tendencies to flee from potential abandonment and obsessively protect damaged women. In turn, Joe is fearful when he learns that Love has given birth to a boy, rather than a girl as they expected. Instead of being a daughter he can protect, his son Henry becomes a representation of Joe as a child, whom he now must prevent from turning into someone like himself. The visual style of the flashbacks— showing hazy, confusing black-and-white scenes from Joe’s childhood — adds to Joe’s depth and explains why his past is so puzzling to viewers and himself.

Joe’s inability to handle the rejection of someone he loves is simple: Joe fears being abandoned. And he will do anything to not abandon his child — even if that means remaining married to a serial murderer. Joe’s dedication to providing for his son powers the plot, building Joe’s image among viewers as the story’s “hero,” protecting his child from Love.

Much to the delight of “You” fans, Season Four was confirmed within days of the release of Season Three. With the full-circle conclusion of the season focused on Joe — now known as Nick — in search of his new obsession Marriane (Tati Gabrielle) in Paris, “You” has yet again promised viewers another season of Joe searching for his soulmate. What can go wrong this time?