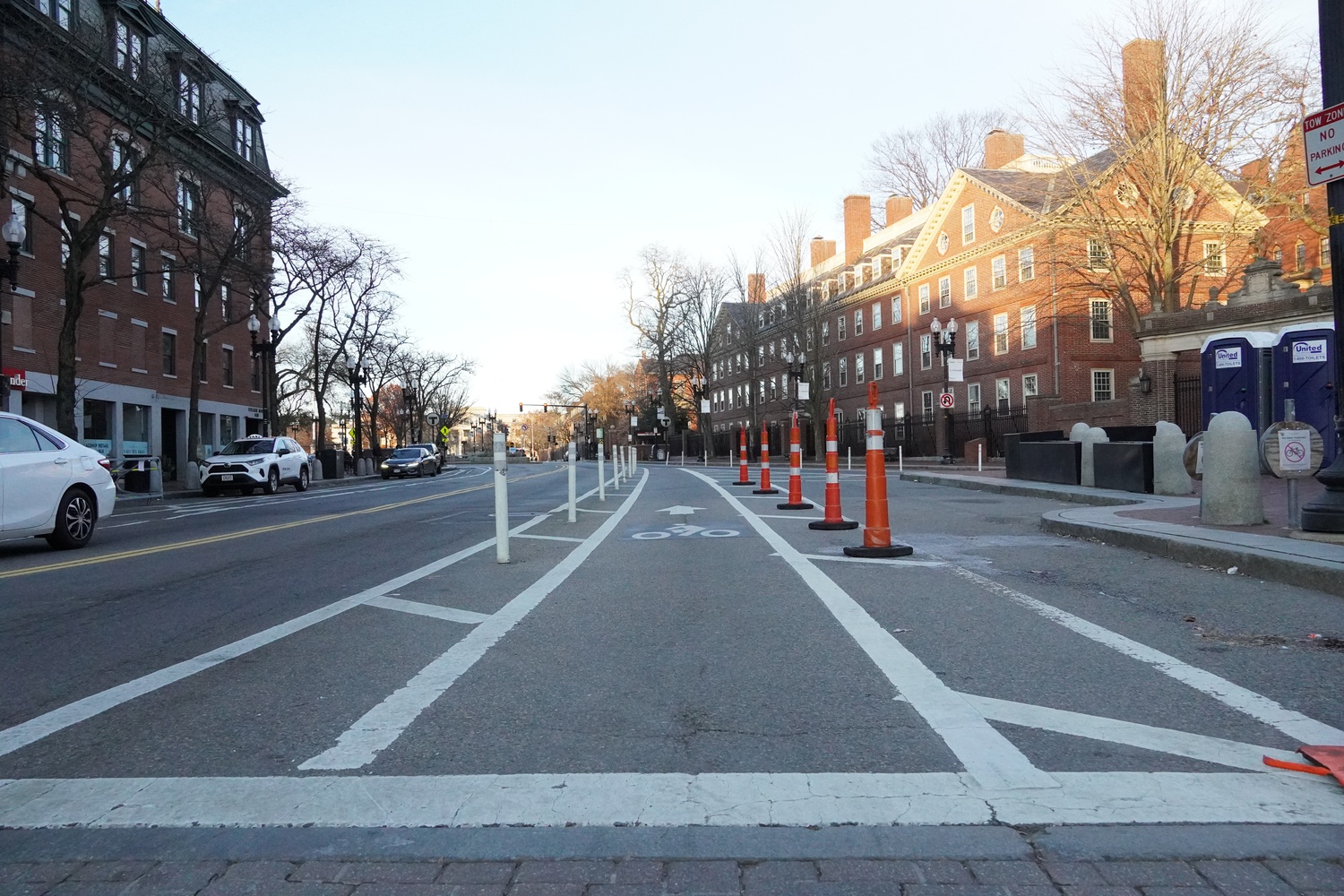 Although there are several bike lanes around Harvard Yard, there is still much conflict between bikers, cars, and pedestrians. By Meimei Xu
Advertisement
Advertisement

Borders of the Bike Lane

When I moved back to Cambridge this summer, I started biking in the city for the first time. Among cars making unannounced right turns, buses drifting into the bike lane, and jaywalkers stepping into the street with no warning, every ride was haunted by the threat of collision.
By Harrison R. T. Ward

The last time I was seriously injured on a bike was (virtual) Housing Day 2020. After I got quadded, I wanted to ride my mountain bike along a local trail to get my mind off the disappointment of landing in Pforzheimer House.

I had drifted too far to the right and smashed my right foot into a rock, sending me headfirst over my handlebars. I picked myself off the ground and biked the four miles back home as my right shoe filled with blood.

In my eight years as a cyclist, I have had many minor accidents and even more close calls, almost all of which because something (like an unleashed dog) and I have not been able to occupy the same space at the same time.

When I moved back to Cambridge this summer, I started biking in the city for the first time. Among cars making unannounced right turns, buses drifting into the bike lane, and jaywalkers stepping into the street with no warning, every ride was haunted by the threat of collision.

It took me several weeks to figure out how to safely ride through the rotary near my summer apartment, and another two weeks to figure out how to cross the portion of Massachusetts Avenue by Johnston Gate where the bike lane suddenly ends on the right side of the road and reappears on the left side of the road with minimal indication of how you are supposed to cross.

By late June, I had things figured out, but I still didn’t feel at ease. When you are on a mountain bike, you can fool yourself into thinking that it’s just you and the trail, that any danger you face is a consequence of your actions. On a road bike, sharing the streets with hundreds of pedestrians, motorists, and obstacles, you never feel in control — the street is chaos.

Rivers Sheehan ’23, who has been biking in Cambridge since last October, tells me commuting around Harvard Square has heightened her awareness of the “unpredictability of behaviors.” After biking the same routes every day, she says, “we want to recognize patterns and see everything as predictable, but actually, people are doing things that are so outside the norm, that that in itself is the norm.”

Any place in Cambridge where cars, pedestrians and cyclists meet becomes a nightmare to navigate, because it’s so unpredictable. Take Mt. Auburn Street, for example: you have students “walking back and forth” and cars that are “annoyed at having to wait,” Sheehan says.

Even in ideal conditions — with wide bike lanes, and protected shoulders — accidents still happen. Sheehan’s was on Mass. Ave., about two months ago, just past the Law School.

She was on the right side of the bike lane, trying to avoid the fast-moving traffic to her left, which pushed her closer to the cars parked to the right of the bike lane. Traveling around 17 miles per hour, a parked car opened its door, and “I hit my brakes as the door hit my face,” Sheehan says.

Many cyclists, to claw back some modicum of control, ride on the sidewalk in the most dangerous areas of the Square. Nicole S. Kendall ’24 tells me that a few weeks ago, a cyclist hit her on the sidewalk by Johnston Gate, one of the most congested intersections in the Square, as she was talking to a friend. The collision wasn’t high speed, but was fast enough to cause lacerations and bruising on her hip.

She says she understands why fear would drive bikers to the sidewalk, but doesn’t understand why they can’t just slow down and walk their bike. “If you are not comfortable,” she says, “you can’t just break the law, because you will hurt someone.”

Much of the conflict between cyclists, pedestrians, cars, and buses is avoidable. Dedicated bike paths can reduce collisions between bikers and vehicles; people are unpredictable, which makes sharing space tricky — so don’t make them share space.

These moments of entanglement in the bike lane are scary, an unfortunate addition to many Cambridge residents’ daily commute, but in many respects, they are also the bike lane’s defining feature — made complete not by what is meant to be there, but by what is not.