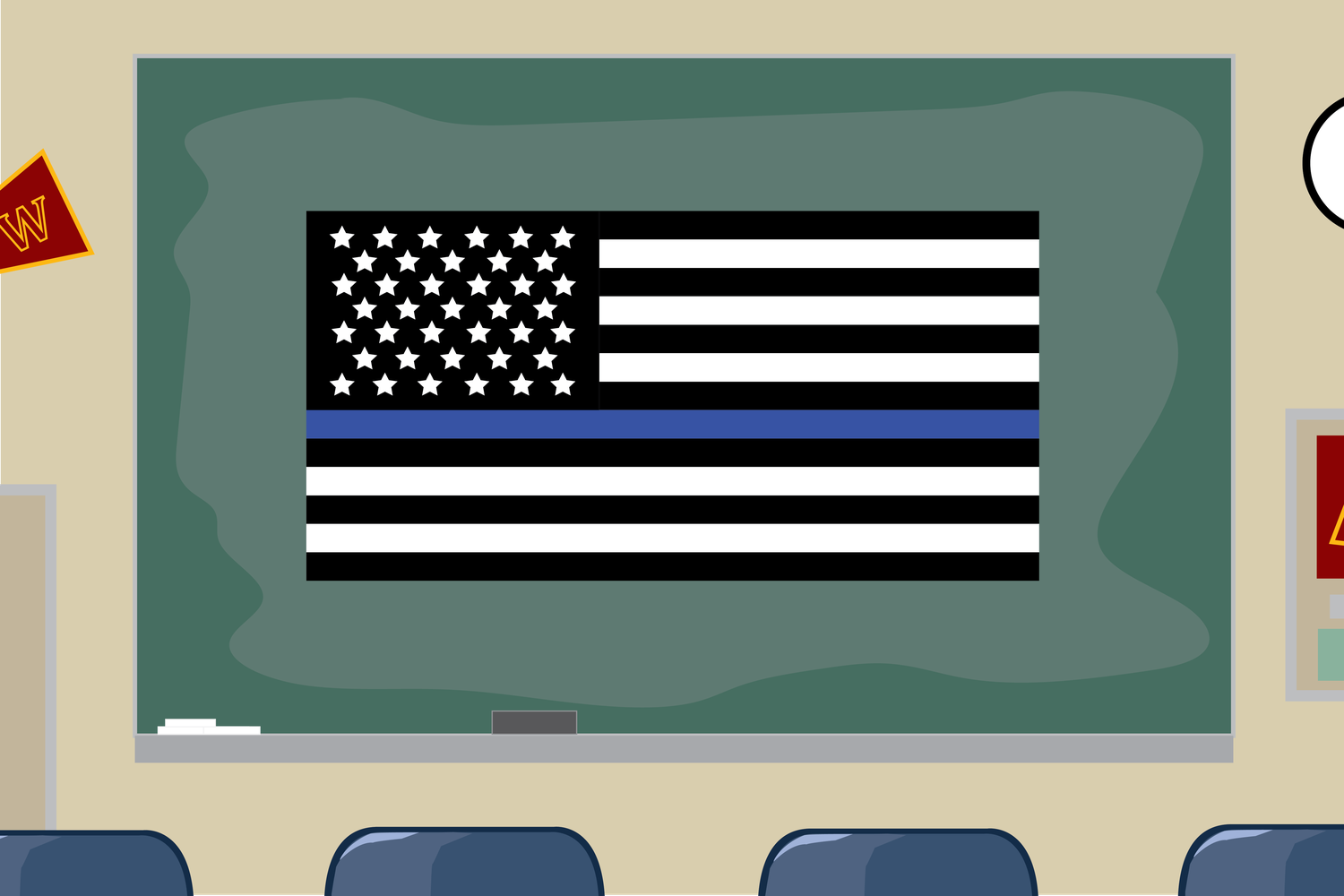 In the last few weeks, two petitions have been circulating through Weymouth: one to take down the high school’s Blue Lives Matter flags, and the other to keep them up.
By Grace R. O'Sullivan

Like many other towns, the Weymouth, Mass. community comes together on the aluminium bleachers on Friday nights and cheers for its football team. But in Weymouth, the crowd doesn’t only cheer for the team — it also cheers for the thin blue line flag being marched out onto the field.

The flags first appeared in classrooms and sports games soon after Weymouth Police sergeant Michael Chesna was killed in the line of duty only blocks away from the high school in 2018. There’s no doubt he made the ultimate sacrifice. But even though the town seemed to come together in the months following that July day, we are now more divided than ever before. In the last few weeks, two petitions have been circulating through Weymouth: one to take down the high school’s Blue Lives Matter flags, and the other to keep them up.

There’s an age-old fantasy of the “classic” New England town. It paints its street lines red, white, and blue, and it celebrates Fourth of July on the beach with a band. When the leaves turn color, it celebrates with the Great Pumpkin Give-A-Wey, during which the town sets up a fundraiser with music, food, and bouncy castles for the kids. That vision is beautiful — it’s the image of a town where people know each other. I lived in that town, in that archetypal colonial house with stairs so creaky that drafts seeping in past the wooden shutters would set them off. It still holds on to old traditions — in fact, it’s one of the few towns in the country that still prohibits self-serve gas stations. Next year, we will celebrate our 400th anniversary. But now that town seems so stuck in its ways that it struggles to look around and see something bigger than itself.

The hard truth is that Weymouth, much like its neighbors in the South Shore, is fraught with tensions that have been simmering for years. The predominately white town received an influx of residents during the “white flight” period in Boston of the 1960s through the 1980s, when forced desegregation in Boston led to violent resistance that ultimately resulted in the mass movement of white families to the Boston suburbs. Majority low-income and minority families were left confined to Boston’s underfunded and aging schools and neighborhoods.

Now, the town reaps what it has sown.

Last month, Bodhi J. Kolwaite, a senior at Weymouth High School, started a petition in collaboration with other students of color to remove the school’s Blue Lives Matter flags. Kolwaite, who is of Japanese and Polish decent, describes the school’s display of the flag as a “serious issue that actually affects us,” and explains that he has felt “an undercurrent of racial discrimination throughout [his] entire life here.” His experience, he says, is one of many. In fact, students made an Instagram page last July dedicated to shedding light on the town’s discrimination, which includes dozens of student accounts about being subject to racial slurs and microagressions.

Luke E. Seto, a co-author of the petition who is of Chinese descent, says that a few weeks ago, a parent focus group was called together because they believed “Weymouth [High School] was disproportionately punishing students of color over white kids.” Kolwaite himself says he has noticed that in independent work stations, a form of punishment where students are not allowed to go to class, “every single person in there was a person of color.” In a town where over 80 percent of the population is white, he described this as “suspicious.”

For some students, the omnipresence of the pro-police flags that have become indelibly connected with the rejection of the Black Lives Matter movement have made them increasingly uncomfortable.

Seto explained that now more than ever, especially with protests against police brutality and the Capitol riots, “it is a good time to be more critical of the things people of color find to be intimidating and offensive.” This flag, he says, is one of them. “[School officials] are looking past all these situations of police brutality and they are choosing to ignore real things that are happening,” Seto continues.

When asked about these issues, Eileen Pitts, Assistant to the Superintendent, responded that they “understand the differing perspectives surrounding modern social topics and the resulting profound emotions and feelings. We will continue to have conversations around these complex issues. We are committed to provide a safe and supportive learning environment for all our students and staff in the Weymouth School District.”

Kolwaite, Seto, and many other students believe that it is the school’s duty to work to right the wrongs of history. Taking down the school’s flags is just one step in the right direction.

“In 2021, to be an educator or someone who works with students [and] to be ignorant about the sociopolitical climate of today is a choice,” Kolwaite says. “You are choosing to be ignorant. It is your responsibility as an educator to know about these things and if you don't, you are doing a great disservice to every person you are in charge of, especially people of color. This willful ignorance is rooted in racism.”

Since creating their petition, Kolwaite, Seto, and their friends have received hateful backlash from people in and outside of the town. Kolwaite described being inundated with phone calls and racial slurs. One night, Kolwaite awoke terrified at the sound of what he thought were gunshots. He then went outside and realized that someone had set off fireworks on his front lawn at 3 a.m.

Another student at the school, writing under a pseudonym, also created a petition aimed at keeping the Blue Lives Matter flag in Weymouth with the description, “Bodhi Kolwaite is the biggest clown on the south shore [sic].” The same Change.org petition was recently altered to include the real name of its author — Ryan Lindblom, a Weymouth High junior who addressed this petition to “Everyone with a brain.” The new description defends the flag as a tribute to late Sgt. Michael Chesna, and argues that its removal would dishonor his memory and is completely unrelated to politics.

But Kolwaite, Seto, and supporters of the first petition argue that that petition seems to be missing the point. They want to find a way that honors all the lives that shouldn’t have been lost, which includes both Sgt. Chesna and people who have died at the hands of those in power.

“We could find a better way to honor him, because he should be honored and everybody agrees on that. But using that specific flag ties him to a racist entity which isn’t what he was and shouldn’t be portrayed as,” Rorie M. Tobin, a Weymouth resident and 2019 Weymouth High graduate, says.

As Seto explains, the flag is about something more than Weymouth. It exists outside of its parks and parades and pumpkin celebrations. In order to realize that, he says residents must look “past the borders of Weymouth” and recognize that the fact that students feel uncomfortable and unwelcome should be enough for the school to take action.

— Staff writer Grace R. O’Sullivan can be reached at grace.osullivan@thecrimson.com.