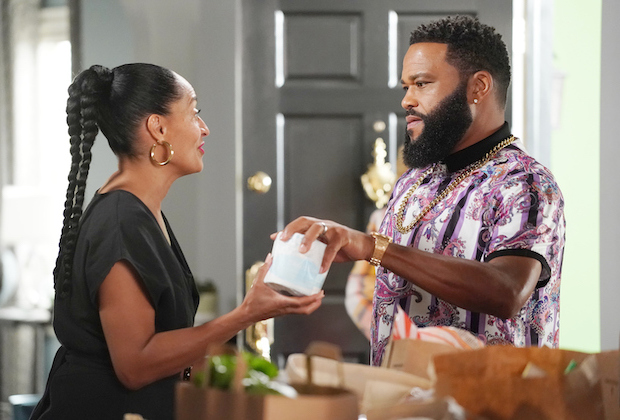 Temperatures are literally rising for the Johnson family in an all-new episode of the ABC sitcom “Black-ish.” The show returned from its winter hiatus on Jan. 26, kicking off the second part of Season Seven, which began last October. In this mid-season premiere, a neighborhood-wide power outage on a hot day leaves Dre (Anthony Anderson) and Rainbow (Tracee Ellis Ross) to grapple with what community means to them, especially in times of crisis. “Black-out” brings the Johnsons into a new year, but it’s clear that the chaos and trauma that defined 2020 is still very much in their world, much like our own. When the power goes out across the neighborhood, beating the heat quickly becomes a family competition. As Dre launches straight into survival mode, stocking up on groceries and toilet paper in a sequence that pokes fun at the TP-hoarders of early 2020, Bow secures an invitation to cool off in another neighbor’s home.

But while most of “Black-ish”’s main cast assembles in the fictional heat to kick off the rest of the season, there is one thing that’s curiously absent from the show: the actual pandemic. “Black-ish” has long been known for the boldness and wit with which it tackles an array of social and political issues. And while the inaugural episode of Season Seven’s second half keeps it real in many ways, it’s still unclear which reality the Johnsons are living in, as almost all traces of the pandemic seemed to have disappeared. For example, a scene featuring a grocery store swarming with maskless shoppers is at once an alarming sight and a fond but distant memory. Continuity-wise, this shift is jarring, as the effects of the pandemic on the Johnsons was a centerpiece of Season Seven’s earlier storylines.

This diversion might, however, be for the best. The decision to abandon any in-world references to the Covid-19 pandemic might mean that “Black-ish” will miss out on some sharp commentary going forward, but the pandemic-free world in which its characters seem to be living is by no means unwelcome. It’s no stretch to assume that the vast majority of audiences have grown weary of seeing pandemic-related storylines on their televisions, costing many shows their escapist appeal. To this end, it’s certainly nice to see the Johnsons interact normally with their neighbors and engage in good old-fashioned tussles over grocery store items without the risk of spreading a deadly virus.

Nevertheless, the simple premise of this episode unearths many truths about being Black in America today, pandemic or not. Dre’s frantic preservationist efforts stem from his disillusionment with the idea of community as the only Black man in a very white Los Angeles neighborhood, knowing that, more often than not, he will be excluded from the cohesiveness and reciprocity that bind his neighbors together. Members of this community may tout their liberal leanings, but their concern with racial justice is largely performative — a reality underscored in the episode by the revelation that Dre has been racially profiled as a “possible looter” in the neighborhood monitoring app NextDoor. Though played for laughs, this moment demonstrates the plain reality that Blackness is consistently criminalized. Although Dre and Bow take divergent approaches to understanding their place within their neighborhood, each has something to learn from the other’s viewpoint and assumptions, as per usual: Indeed, it turns out that Bow’s invitation to spend time in another neighbor’s air-conditioned house is nothing more than a ploy to rope her into a multi-level marketing scheme with a microaggressive hook. Conversely, Dre’s cookout is ultimately salvaged by a neighbor’s propane tank. The episode’s dual case study in crisis management — Dre’s every-man-for-himself philosophy versus Bow’s belief in reciprocal altruism and community — converge to illustrate a point that both parties can agree on: The psychological toll of being the only Black family in a white neighborhood is incredibly real and absolutely necessary to acknowledge.

In some ways, “Black-out” almost feels like it’s been done before, at times leaning heavily on old character dynamics and situational cues while also underutilizing some of its funniest characters (the kids and Dre’s mother Ruby (Jennifer Lewis) aren’t given too much to dos). Nevertheless, the episode depicts some very real truths and wastes no time welcoming viewers back to the Johnsons’ world for the back half of Season Seven. Indeed, “Black-ish”, possibly having liberated itself from some coronavirus-related narrative constraints, is gearing up for a run of strong episodes, ripe with further antics and witty social commentary.

— Staff writer Jamila R. O’Hara can be reached at jamila.o'hara@thecrimson.com.