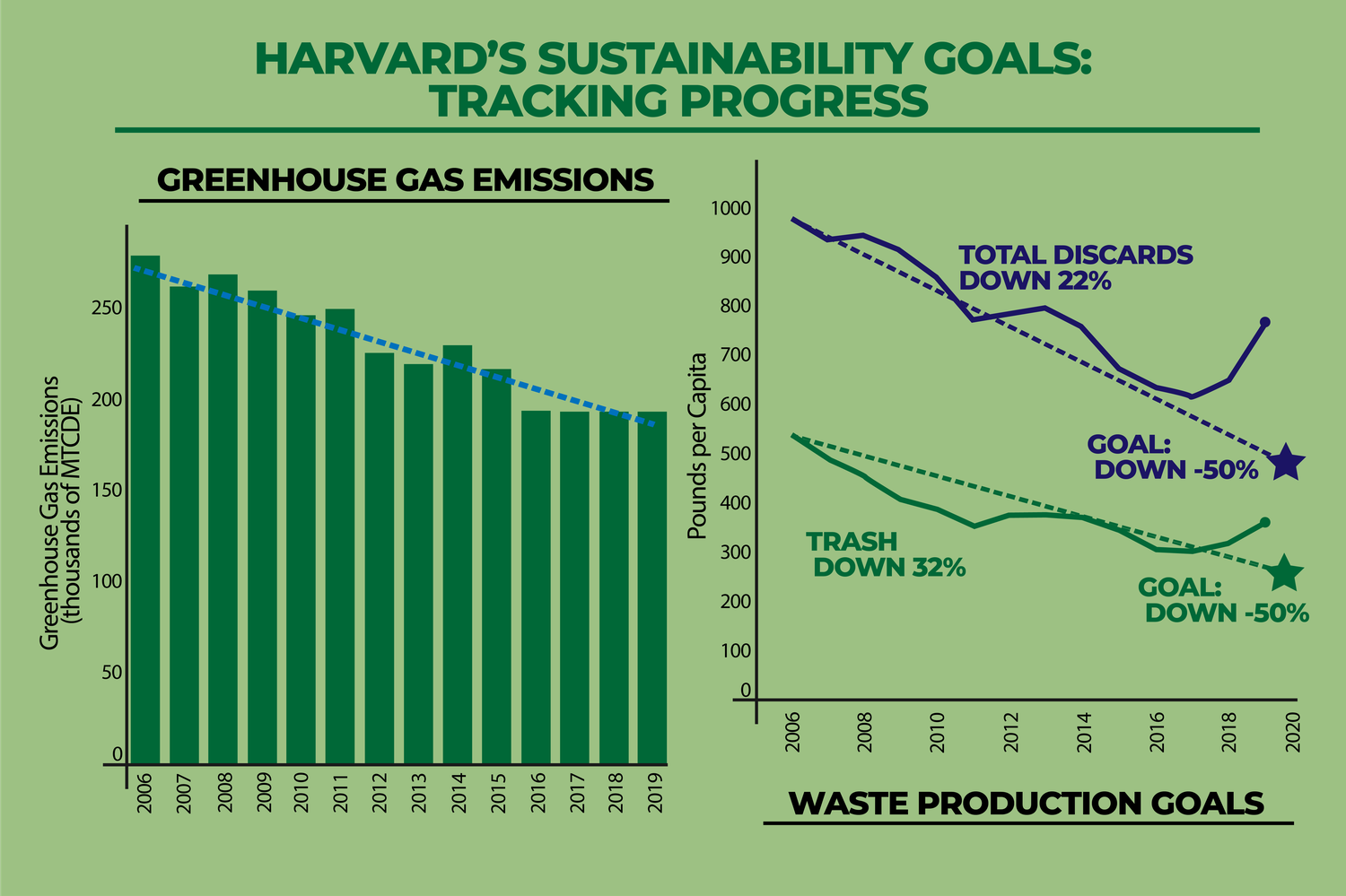 Despite reductions in campus greenhouse gas emissions, Harvard failed to meet 2020 waste and water reduction goals set forth by the University’s 2014 Sustainability Plan.

The University achieved most of its 2020 pledges, including several before the deadline. The Green Restaurant Association awarded each of the 13 undergraduate dining halls operated by Harvard University Dining Services a two or three star certification for sustainability in 2014. In 2016, the League of American Cyclists designated Harvard as a gold-level “Bike Friendly University.”

But the University fell short of its target to reduce waste per capita by 50 percent from a 2006 baseline, despite initial progress. Trash decreased by 32 percent and total discards fell by 22 percent, according to the Harvard Sustainability Office’s open data portal.

“I think that that’s an area where we set a goal that was more aspirational, and there’s more work to be done,” Heather A. Henriksen, the managing director of Harvard’s Office for Sustainability, said in an interview last week.

“One of the challenges there is actually just getting great data — and data from the vendors — which is an industry-related challenge,” Henriksen added.

By the end of 2017, Harvard had reduced its total trash to 302 pounds per capita — a decrease of around 44 percent from 2006 — but total trash increased over the subsequent two years.

“Waste is always challenging,” said Julian Dautremont, the director of programs at the Association for the Advancement of Sustainability in Higher Education.

“You can change your electric supplier, you can put solar panels on building rooftops and these kinds of things, and it doesn’t need everybody on campus to participate,” he said. “Every person is creating waste, to some extent. And it’s harder to change on a systemic level.”

The University also undershot its target for a 30 percent decrease in water usage on campus from a 2006 baseline. A “known infrastructure break” in 2019 resulted in a significant increase in water consumption, according to the Sustainability Office’s 2019 annual report. But water usage in 2018 — which sat at a 24 percent reduction from 2006 and a 2 percent increase from the previous year — still fell short of the goal.

“We always want to be really transparent and report what the actuals were, but there is a story behind it,” Henriksen said. “Past years, again, were between 24 and 26 percent reduction from 2006.”

Like waste reduction targets, Dautremont said that water reduction can be difficult because of the collective buy-in it requires from everyone on campus.

“You can change the showerheads, but you can’t really change how long people choose to shower,” he said.

While the University struggled with waste and water usage, it exceeded its goal to maintain at least 75 percent of landscaped areas with organic landscaping, according to Henriksen. Harvard has also successfully reduced greenhouse gas emissions from 2006, though emissions reductions have leveled off since 2016.

Back in 2016, Harvard achieved its goal to reduce school-wide emissions by 30 percent from a 2006 baseline.

Henriksen, who has been Harvard’s chief sustainability officer since 2008, said she is “very confident” the school is on track to meet its goal to be fossil fuel-neutral by 2026. Neutrality, she said, is “a bridging strategy” to be fossil-fuel free by 2050 — a goal set in 2018.

“They’ve helped push the field forward,” Dautremont said of Harvard. “That’s, I think, appropriate, given the amount of resources that Harvard has to invest in sustainability. We kind of need them to be a leader in this area.”