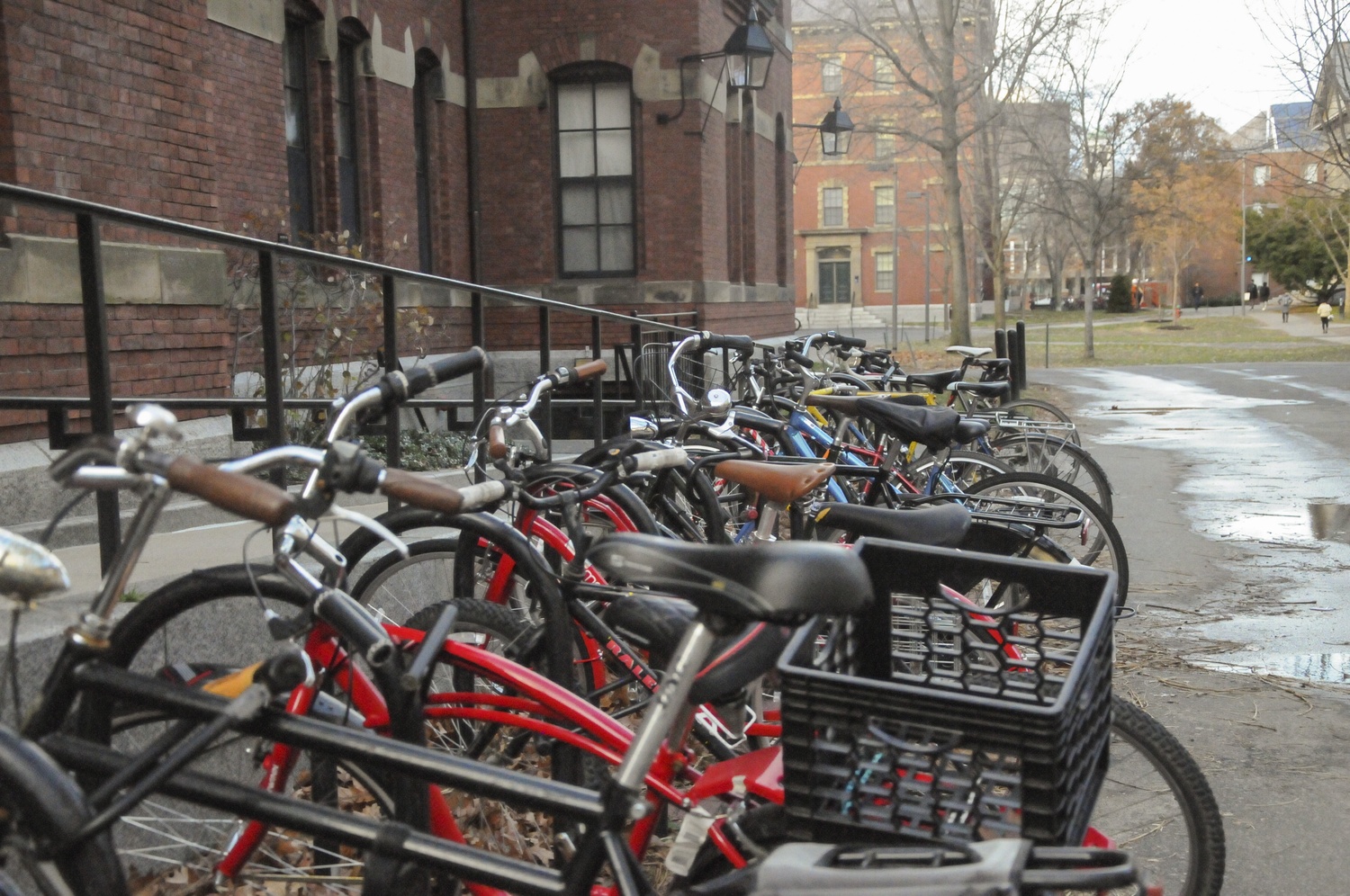 Student bikes saturate the bike racks outside of Weld in the middle of winter. By Ryan N. Gajarawala
By Alexis K. Bolner and Peter E. O'Keefe, Contributing Writers

The annual awards, which the League announced earlier this month, are intended to commend institutions with “outstanding support of bicycling to ensure healthy, accessible and eco-friendly transportation and recreation for students and staff,” according to the League’s press release.

The League evaluates universities along the categories of “engineering, education, encouragement, enforcement, and evaluation and planning,” said Amelia Neptune, Director of the Bicycle Friendly America Program at the League of American Bicyclists.

Among programs that stood out to the League was Harvard’s Bling-Your-Bike event, for which the University provided lights and reflectors for bikes. Neptune said the event was even featured on the League’s blog.

The League also considers universities’ accessibility to cyclists in terms of resources such as bike parking and storage, bike lanes, and bike safety education, Neptune said.

Ben A. Hammer, Associate Director of Harvard’s CommuterChoice program, said CommuterChoice is among these resources. The program offers a number of services designed to promote bike access and safety, including a unique reimbursement system called the Bike Benefit Program.

“We offer reimbursement to benefit eligible faculty and staff for eligible bike expenses, including repairs, storage, maintenance, and, there’s a fourth one in there, basically bike expenses that will allow you to commute safely to campus,” Hammer said.

Neptune said she was particularly impressed with this initiative when evaluating Harvard’s efforts to encourage biking.

“That’s something Harvard has done for years,” Neptune said of Harvard’s reimbursement of bike expenses. “We were really impressed to see that they continued that incentive.”

Commenting on Harvard’s accessibility as a student cyclist, Jack W. Deschler ’19 said, “I think that Harvard is about as bicycle-friendly as it can be given the fact that it’s in a city like Cambridge.”

Deschler specifically pointed to Harvard’s infrastructure to support cyclists. “Basically anywhere you need to go, there’s a place to lock your bike,” he said. “Which I think is probably the most important thing living in a city, so that’s really good.”

Deschler also said that biking in a city can be inherently challenging and dangerous, but safety is improving.

“I think Cambridge has gotten better even in the time that I’ve been here,” Deschler said. “They put in a two-way bike lane on Brattle Street last year that’s separated by cars, which I think has made a lot of routes that I bike significantly safer.”

Deschler also highlighted the Undergraduate Council’s recent initiative to subsidize bicycles and scooters for students in the Quad and Harvard University Police Department’s Bicycle Registration program as examples of Harvard’s efforts to encourage biking on campus.

Harvard is among seven universities—including University of Kentucky, University of Washington, Seattle, and Dickinson College—to receive the gold-level award this year. Harvard previously received the gold level award in 2016.