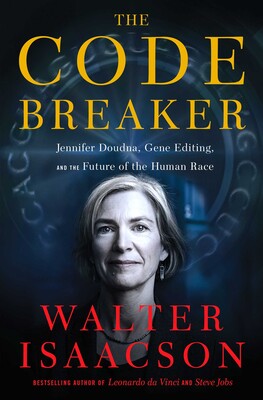 Pioneer of CRISPR gene editing, Jennifer Doudna, on the cover of "The Code Breaker" by Walter Isaacson By Courtesy of Simon and Schuster
By Mikel J. Davies, Crimson Staff Writer

Walter S. Isaacson’s ’74 most recent biography follows the life of a scientific discovery almost as much as it does the life of one incredible scientist. “The Code Breaker” details the story of Jennifer Doudna as she embarks on a journey to unravel some of the mysteries of biology. Doudna, who grew up being told that women can’t involve themselves with science, would become one of America’s greatest thinkers and kindest genetic researchers. Following her discovery of the CRISPR-cas9 system of possible gene editing, her life flew into the center of controversy and cutting-edge science. By taking a holistic look at what got Doudna, and one of her friends and co-researchers, onto the virtual stage for the 2020 Nobel Prize ceremony, Isaacson uncovers and demystifies the stigma around high level thinking and biologic research in “The Code Breaker.”

By walking through the life of a character, the beginning of the too-short 500 page biography feels like many of Isaacson’s other incredible stories. Reminiscent of his definitive look into the life of one of the previous centuries most iconic minds, Albert Einstein, the story starts with Doudna’s childhood adventures throughout her home on the big Hawaiian island Hilo. A little girl who never quite fit in, Doudna found solace in good books — particularly James Watson’s “The Double Helix,” detailing his discovery of the structure of DNA.

In an elegant approach, this biography contains not one story, but two connected and parallel storylines evolving beside one another: the life and work of Jennifer Doudna at UC Berkeley, and the emergence and popularization of CRISPR. In many ways, Isaacson’s chapters that focus on CRISPR bring to light the unusual and often untold stories of how these kinds of breakthrough discoveries emerge. In a chapter titled, ‘The Yogurt Makers,’ Isaacson takes the time to not only honor the history of CRISPR’s emergence, but also to shed light on some scientists who often go unnoticed, making it clear that no scientific discovery is made by a single scientist. There is an international web of cooperation and communication, which Isaacson makes clear as he follows and writes about the stories of the researchers from the U.S., China, Sweden, Lithuania, Spain and the rest of the world.

It is these little stories — one or two chapters a piece, giving credit where credit is due and shedding light on the foggy procedure of institutional research — where Isaacson's expertise as a biographer shines through. As a former Harvard student, Isaacson knows of the ivory tower and prestige that clouds opportunity at illustrious universities. By writing about the humanity of great scientists and innovators like deans at Harvard Medical School, researchers at the Broad Institute, and collaborators from the Max Planck Society, Isaacson gives readers the opportunity to see into a world that can otherwise seem inaccessible to many.

With a great quote from James Watson, Isaacson brings forth the big question that arises from the emergence of easy and possible gene editing: “If scientists don’t play God, who will?” Isaacson explores the moral and ethical questions that accompany making germline edits for the first time in global history. There is potential for permanent encoding of inequality as edits go beyond correcting genetic diseases and into more nebulous realms. Isaacson discusses the importance of Doudna’s work in the recent descent into a global pandemic as SARS-Cov-2 emerged in late 2019. The scientific world was tasked with rapidly studying this mysterious new disease and Doudna’s lab emerged at the forefront, using CRISPR as a way to not only diagnose and test for Covid-19, but also to actively fight it with the cas enzymes.

Jennifer Doudna led her lab to be one that is based on collaboration and cooperation across disciplines, and this was how she prepared herself to face Covid-19. To celebrate her contributions in combating Covid-19 and her ground breaking gene edition research, Doudna — along with her 2012 partner Emmanuelle Charpentier — won the 2020 Nobel Prize in chemistry. Walter Isaacson, with his decades of celebrated experience, documented Doudna’s life and work beautifully. By taking the time to walk through her lab, get hands-on experience, and interview hundreds of scientists that have contributed to the field of gene editing, Isaacson and his work as a biographer stands apart.

— Staff Writer Mikel Davies can be reached at mikel.davies@thecrimson.com .