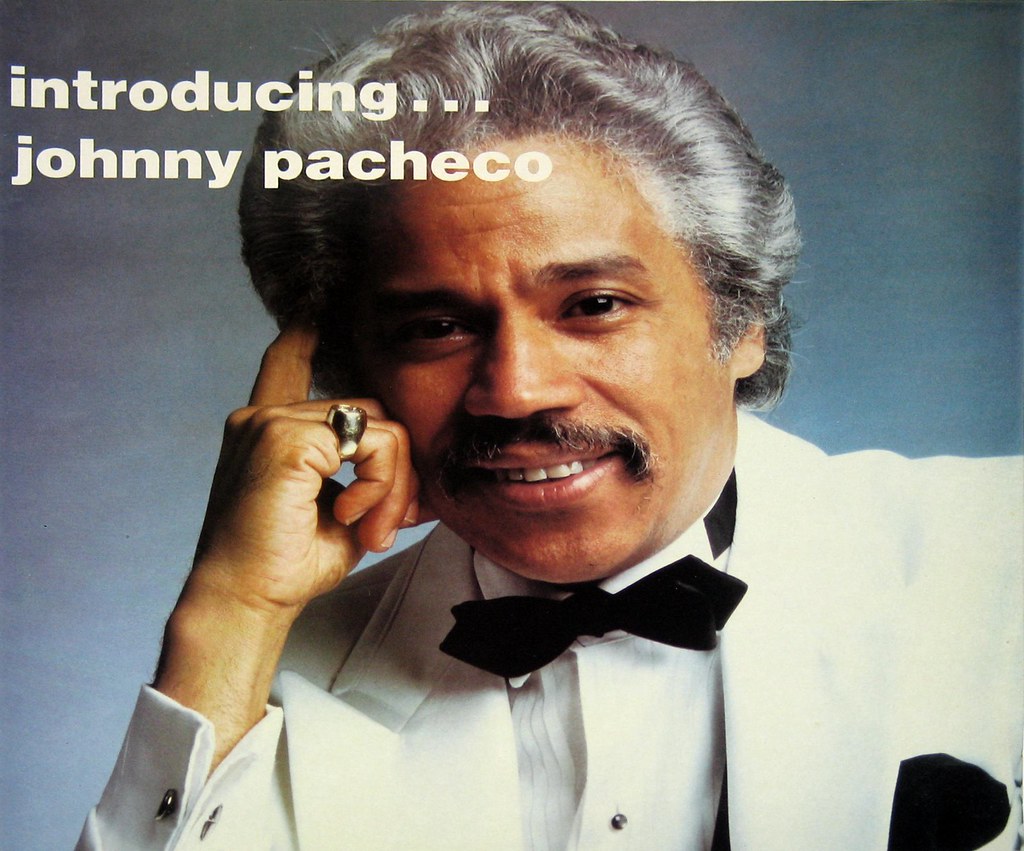 "Introducing JOHNNY PACHECO 12' VINYL LP" by vinylmeister is licensed with CC BY-NC 2.0. To view a copy of this license, visit https://creativecommons.org/licenses/by-nc/2.0/ By Courtesy of vinylmeister via CreativeCommons
By Alejandro C. Eduarte, Crimson Staff Writer

There was never a first time you heard a Fania song. If you are Cuban or Puerto Rican or loved someone who is, the moment the record came on (and even a hair before that) you knew where it came from. You heard it in your grandmother’s house, in the buzzy wash of air in the tropics, while cleaning or on the radio or just strolling the neighborhood. Or else in the dance bar you taxied to that night where the women encircled you, showed you how to use your arms and your hips and your feet, because you had your body now and what is life if you don’t use it? All the younger people in your family taunted, laughed, thinking to embarrass you, but you didn’t mind. You stayed, unashamed. How could you say no? Your partner’s feet sent you a secret message through the click of her heels on the floor while the band played one of those songs. Of Celia or Héctor or Willie or Cheo or Eddie or Rubén or Tito or Ismael. Only after a moment spent in a trance do you realize the beat of your partner and the track is the exact same. So keep up.

It is impossible to describe how it feels having two tracks of claves or trumpets or piano lines play on top of each other, pulling your hips spry in one direction and sending your head up to cry when the polyphony snatches any instinct out from under you. Anything you think you know is dust in the face of the music.

Salsa: That’s the word. The music shines a glorious flashlight to the Caribbean (and signals a deadly threat to the endangering neocolonial regimes), reminds you the better, more dangerous world is in wait, in invisible ink, right where you find yourself, whether on the islands themselves or in communities who come from them to Manhattan. Take your time. Grab it. Follow into that zone for the forging of never-go-back insurrectionary plans. The music is waiting for you when its five-beat rhythms come launch the world forward.

When many think about Cuba and its indispensable revolution, they misunderstand that term to mean a hard-fought change of leaders. No. This is complete overturn. A re-engineering of structures from the inside. Salsa is the play, the unfettered genius that happens in that new possibility, with the colonial-backed leaders ousted and the revolutionaries among you now.

Johnny Pacheco, the Dominican-born flute expert, co-founded Fania Records in 1964, which became an engine of salsa’s path through the world, curating bands and plans for all these luminary currents. Looping in dozens of soon-to-be-famed musicians who descended from earlier Afro-Cuban and New York styles and folded in influences of jazz and mambo, he endowed not merely a platform for Latin music but an infrastructure: Being in Fania was being in Fania for life. If you made a record for him, you had it. The mark. The word “FANIA” was a pastel trapezoid in the corner of your album cover. Beginning from the endlessly-citable anecdote of selling CDs out of cars on the streets of New York, he systematized currents of Cuban music into an irreducible experiment. This test became, in its stylistic risk, more widely beloved, and blazingly, daringly successful chart-wise, eclipsing lazy imaginations of a monolithic Latin sound theoretically employed everywhere in the same fashion. There’s a particular reason he never stopped calling Fania’s members, who hailed from many countries (and whose roots spread back to places such as the Congo), “las estrellas”: They are of the world.

When a curator dies, the question remains: What will become of the museum? Now it shows up in street festivals in places like Cuba or Puerto Rico or Colombia, in old colonial streets, crowded full of thousands of people (locals and tourists). As Christopher Washburne reminds us, it was in the 1970s that Fania began to package the music as pan-Latin, a marketing choice which ushered in waves of controversy among its most popular musicians about obscuring its Cuban roots. It also allowed alternative practices and new ways of innovating what salsa could be as it traveled outside the U.S. market. All this is to say: When people hear the salsa band coming, they clear the way. Clave, trumpet, trombone charging the air, pushing through the people. You hear it and know love. The music leaks between the cracks in the walls when you retire for the night, and that’s just if you make it back home and don’t stay out dancing. You dream grinning, still tapping their beat. You didn’t think the band would leave you so easily, did you?

English has no adequate structures to approach that maze that is salsa music — rhythms and ways of chasing them ingrained in the spine. Try “El Paso Del Mulo” or “Quimbara” or “Toro Mata” from Pacheco’s 1974 album with Celia Cruz. Let those horns rise through and break the sonic boundary at the top of your head and you’ve already made it to a state beyond your body. And then it pushes further. The whistles that spin across the chorus of “Mi Gente” bleed through into the horns of “Oriente” and recur in the lavender-smooth self-inauguration of “Bemba Colorá.” When you need to remember, salsa can do it for you. You think you can tell history your way, and the song whispers back that it’d like to see you try.

How many of us, Latin American-descended, would have been children without this music? Those musicians who raised us are boomeranged 10 years ahead from wherever we are. They see where we’re going. They watch over us. Believing they matter any less, in accordance with imperial logics that relegate and malign Caribbean history, is an illusion of a very grave kind. All the horns, the conduction, the voices, aid in orchestrating people across the hemisphere in waves, towards Black-and-indigenous-centering, unassailable, soul-blasting, push-to-the-very-edge freedom. But the secret is: It’s already here. Just listen.