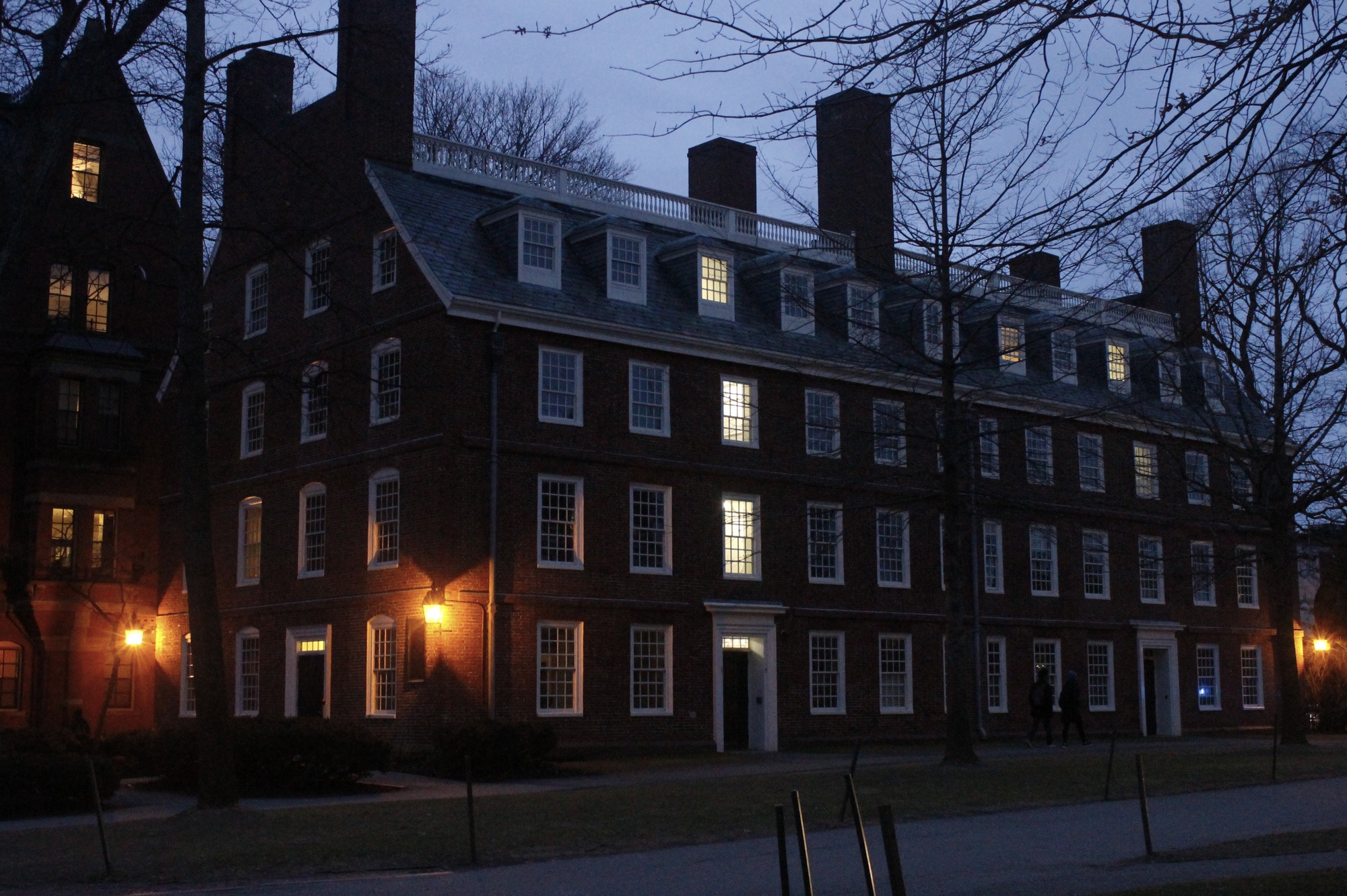 Inside Harvard’s Cautious Reopening Approach in the Year of Covid

By Jasper G. Goodman and Kelsey J. Griffin, Crimson Staff Writers
Harvard administrators opted for a conservative approach to reopening amid the coronavirus pandemic that has kept on-campus case rates consistently low but left students scattered across the globe. By Kathryn S. Kuhar

When Harvard University announced one year ago it would evacuate its campus, the news set off a frenzy among its students and peer institutions alike.

At the time of the announcement, the severity of Covid-19 was hardly understood. Spring breakers were planning to carry on with travel plans, sports arenas were filled, and masks were a rarity.

“We were all heavily criticized at that time for acting prematurely,” University President Lawrence S. Bacow said in an interview last month, reflecting on the decision.

But within two weeks, nearly every university in the country followed suit, shuttering campuses and sending students packing in order to curtail the spread of a virus that was just beginning to wreak havoc on the Western world.

In the year since, the consensus that emptied almost every institution in America has given way to a vast array of approaches to reopening each sector of society — including higher education.

Backed by deep pockets and a slew of in-house resources and expertise, Harvard has opted for a conservative approach to reopening that has kept on-campus case rates consistently low but left students scattered across the globe.

Today, the empty grab-and-go dining halls and vacant classrooms that line Harvard’s campus stand in stark contrast to the scenes at many other schools across the country.

Harvard administrators acknowledge they have shied away from taking the same risks that other educational institutions did in deciding their reopening plans.

“All along the way, we have been conservative, in part because, as I’ve said many, many times, the cost of being wrong in making these choices is asymmetrical,” Bacow explained.

When colleges began preparing for the fall 2020 semester, they had a data problem.

With students dispersed at homes around the world and dorm rooms almost empty, Harvard’s leaders had limited information about how the coronavirus might spread on campus.

“At each step of the process, we try to make judgements based upon the best scientific evidence that we have at that moment in time,” Bacow said.

In the early stages of its fall planning, the University consulted with several public health modeling experts, including Harvard School of Public Health professor Marc Lipsitch, then-Harvard Medical School professor Rochelle P. Walensky — who was tapped to lead the Centers for Disease Control and Prevention in December — and Yale professor A. David Paltiel.

Walensky and Paltiel put together a series of “model-based and economic evaluations” that suggested reopening would be possible if it included high-frequency surveillance testing and strict adherence to other public health measures, Paltiel said in an interview.

Still, Harvard faced an additional challenge as it planned its reopening: the density of the surrounding Cambridge area.

“Unlike many other sister schools that did choose to open, Harvard finds itself in the middle of a very crowded place,” Paltiel said. “It’s one thing to reopen Vassar College, when you know that if anything goes wrong, thank goodness, you’re out in the middle of a cow pasture.”

The College was also challenged by its high-density campus housing arrangement, according to administrators. When Harvard is operating fully, 98 percent of its undergraduates live in dorms, more than most other Ivy League schools.

“We needed to ensure that we would have adequate quarantine capacity and the capacity to isolate students who have had infections,” University Provost Alan M. Garber ’76 said in an interview last week.

The College ultimately opted to bring only the freshmen class back to campus for the fall semester, along with students with extenuating circumstances at home. In the spring 2021 semester, the College offered on-campus housing to seniors and most of the junior class.

Harvard’s reopening plans had significant financial costs that the University decided would be worth bearing: the College likely will not take in much of its room and board revenue this academic year, and Bacow told The Crimson in September that the University had incurred tens of millions of dollars in costs for testing alone.

Administrators have said that distributions from the University’s $41.9 billion endowment helped support some of those increased expenses, a crutch other universities grappling with the same reopening decisions lacked.

“It’s hard not to imagine that if the financial constraints were as manageable elsewhere as it was on the Harvard and Yale campuses that more colleges wouldn’t have enacted their approach,” Paltiel said.

Garber said Harvard possessed additional advantages over other universities beyond its financial backing, namely its location in Boston, a hub for life science research institutions, many of which the University owns.

Harvard and MIT are home to the Broad Institute, which developed the capacity for large-scale Covid-19 testing within a matter of days early in the pandemic. Harvard, along with more than 100 other colleges around the Northeast, relies on the Broad Institute to process coronavirus tests for its on-campus population.

“For a long time, that simply was not an option in many parts of the country,” Garber said of Harvard's robust testing capacity.

Garber said the University “put a lot of effort” into ensuring it would be able to conduct frequent testing in order to detect infections early and avoid widespread transmission of the virus.

“The strategy we pursued was designed in particular to avoid large outbreaks, superspreader events, the kinds of disruptive events that might actually set us very far back,” he said.

While Harvard vacillated on the number of students it planned to bring back to campus, its neighbor on the other side of the Charles River — Boston University — was already making plans for how to bring back all of its students to campus and offer in-person fall classes.

A scaled-back reopening similar to Harvard’s was discussed only “briefly in the early spring,” before BU President Robert A. Brown quickly took the idea of an all-virtual experience off the table, according to Davidson H. Hamer, a public health professor at the school who was involved with organizing its reopening.

BU — which reopened its campus to all students in the fall with twice-weekly surveillance testing — is one of a number of Boston-area colleges that opted for a significantly less restrictive reopening approach than Harvard.

Most other area schools — including Northeastern and Boston College — have also opted to reopen campus to a greater degree, bringing undergraduates back and hosting hybrid courses that feature options for both in-person and online learning.

Even MIT, the University’s counterpart in Cambridge, opted to bring three full cohorts of students back to campus in the spring, and said it would offer some opportunities for in-person learning.

Data shows that Harvard’s caution has helped to keep its positivity rate miniscule, with one of the lowest overall positivity rates in the Ivy League, 0.18 percent. But with the exception of Boston College — which notably does not disclose its surveillance testing frequency — most local schools have made it through the academic year unscathed by a major outbreak.

“I think that both Tufts and BU showed that you can still have a fair amount of students on campus and operate safely,” Hamer said.

Garber — a public health expert himself, with training as a physician — said he has no regrets about any of the University’s reopening decisions.

Within the Ivy League, Harvard’s cautious plan is less distinctive. Many of the University’s conference peers opted to reopen with similar conservatism in the fall, bringing back limited cohorts of undergraduates.

Numerous schools — including Princeton, the University of Pennsylvania, and Columbia — were forced to reverse course late in the summer after initially announcing they would bring back larger cohorts than they ultimately determined to be feasible.

No Ivy except Cornell — which fully reopened its Ithaca campus in the fall — has brought back all students for both semesters.

Harvard also tests students at a higher frequency than any other Ivy except Cornell. Gerri Taylor, who co-chairs the American College Health Association’s Covid-19 task force, said the University’s testing strategy has been a model.

“You can’t be harmful by being conservative,” Taylor said. “I think being conservative is being very cautious and relying on scientific data, and I think that’s what schools have to do. And my personal opinion from watching — and I’ve been watching a lot of schools — is that Harvard’s done a really good job.”

With remote learning guaranteed through the summer and Commencement Exercises for the Class of 2021 postponed, the fall 2021 semester offers the first ray of hope for a complete reopening of Harvard’s campus.

Faculty of Arts and Sciences Dean Claudine Gay said in an interview Friday that the University’s fall planning is focused around an “overriding goal” for the “full return” to campus for students, faculty, and staff. But University leadership has yet to issue official fall plans.

Garber noted Harvard does not use “fixed numerical benchmarks” such as test positivity rate goals for deciding when to move forward with reopening.

“The test positivity rate is informative, but what you really care about is not so much what percent of tests is positive, but what is the frequency or prevalence of infection in the community,” he said.

“Students are socially active individuals, and the whole idea of being on campus is socializing and being with others,” she said.

Reopening plans also hinge on epidemiological developments in the progression of the pandemic, according to Garber. The emergence of Covid-19 variants — which may be more transmissible and induce a longer period of infectivity — currently pose a large concern.

“As they grow in prevalence, which is what’s happening right now, it suggests that we will need to be a bit more cautious about how we approach the summer and fall,” Garber said. “That doesn’t mean that we have to turn the clock back, but it does mean that the likelihood that, for example, we might still need to be wearing masks in various situations in the fall has gone up.”

The World Health Organization expects the coronavirus vaccines currently available to provide at least some protection against these variants. Bacow said in an interview in February that the University had not decided whether to require vaccinations for on-campus residence in the fall.

Harvard Medical School professor Edward A. Nardell, who also holds an appointment in immunology and infectious diseases at the Harvard School of Public Health, said Harvard should set a minimum threshold for the percent of the on-campus population that is immunized.

“If you achieve 60, 70 percent vaccination rates by the fall, then what that means is there may be occasional Covid cases in the student body or the faculty, but there won't be outbreaks,” he said.

Despite the challenges of planning a full reopening amid uncertainty around case prevalence and vaccine distribution, Garber said students’ adherence to on-campus restrictions will help the school reopen more quickly.

Reflecting on the past year, Garber stated he has no qualms about the University’s conservative approach to reopening.

“We adopted an approach that was designed to be able to handle many kinds of eventualities that just didn’t occur,” he said. “You could say, ‘had we taken more risks, would we probably have been okay?’ and the answer is, yeah, that’s probably true. But that does not mean that, had I been able to do things over again, we would have made different decisions.”