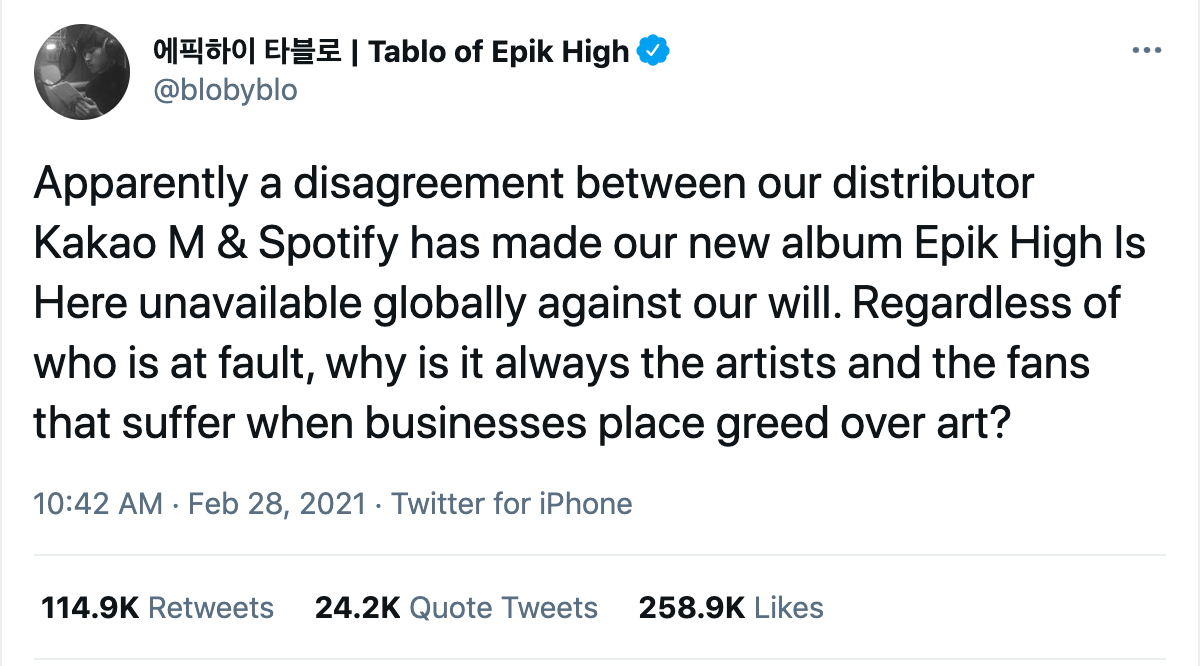 The K-pop community breathed a collective sigh of relief on March 11 when Spotify and Korean entertainment company Kakao announced that they had reached an agreement to bring hundreds of K-pop songs back to the global streaming service. Several weeks earlier, K-pop listeners had discovered that music from many famous artists, including IU, Apink, and Loona, had vanished from Spotify without any notice. This week-long blackout caused confusion and frenzy in the K-pop community, especially on Twitter, where #spotifyisoverparty started trending in response to the sudden removal of so many beloved songs. After fans discovered the cause of this disappearance — the expiration of the songs’ licensing agreement between Kakao and Spotify on Feb. 28 — a round of finger-pointing began as each company blamed the other for the failure to renew these agreements. However, this dispute seems to have been at least temporarily resolved, as the two companies announced last Thursday morning that all Kakao content, including fans’ most beloved K-pop songs, would be available again on Spotify.

For those not plugged into the world of K-pop or Twitter, the past week’s whirlwind of news may seem like an overreaction to just getting some songs back. But this showdown between Spotify and Kakao Entertainment is more than just a fight over licensing agreements of K-pop songs: It’s actually part of a much larger problem in the music industry — who gets to control what music streams and what doesn’t?

Understanding this chaos between Spotify and Kakao requires a deeper look into the Korean music streaming market and its relationship with the global market. Kakao (formally known as KakaoM) is a powerhouse South Korean entertainment company that operates as both a talent agency and music distribution company. As a music distribution company, Kakao Entertainment owns the rights to 37.5 percent of Gaon Chart’s — Korea’s music industry standard record chart — year-end Top 400 Songs chart from 2020. This includes music by K-pop stars like IU, Apink, Zico, Epik High, Loona, and more. In addition to owning the rights to many popular K-pop songs, Kakao Entertainment also owns Melon, which is Korea’s largest music streaming service with nearly nine million monthly active users.

In short, one company in Korea wields disproportionate power over both the distribution and streaming of K-pop.

For many years, domestic streaming services such as Melon (owned by Kakao Entertainment), Genie, Flo, and Bugs have dominated the South Korean music streaming industry. When Apple Music tried to enter the South Korean music streaming market in 2016, they immediately encountered obstacles — like being unable to acquire domestic licensing agreements for K-pop — and found little footing within the market. For example, Kakao Entertainment allowed a licensing deal with Apple Music for the streaming of their K-pop songs outside of South Korea, but not within South Korea.

But where does Spotify fall into this narrative?

On Feb. 1, Spotify launched its streaming services in South Korea — the sixth largest music market in the world. But there was one problem: Spotify was unable to secure domestic licensing deals with Kakao because it had become a direct competitor of Kakao’s own streaming service, Melon. At the same time, time was ticking for the original global licensing agreement between Spotify and Kakao to be renegotiated before its termination on March 1.

The two companies became embroiled in the intricacies of the license’s renewal. Eventually, March 1 arrived without an agreement, leading to the purging of K-pop songs on Spotify across all markets. According to The Korea Herald, these talks failed because Kakao wanted separate licensing distribution agreements for the domestic market in Korea and the global market, but Spotify turned down this proposal and refused to renew the original global distribution agreement without the domestic one.

For one week, Spotify and Kakao continued to butt heads, refusing to concede and releasing statements blaming each other for failing to renew the global license. Meanwhile, K-pop fans were left in the complete dark as days passed without signs of the affected songs’ return to Spotify. Expressing his frustration, hip hop group Epik High’s Tablo tweeted, “Apparently a disagreement between our distributor Kakao M & Spotify has made our new album Epik High Is Here unavailable globally against our will. Regardless of who is at fault, why is it always the artists and the fans that suffer when businesses place greed over art?”

Eventually, Spotify and Kakao reached an agreement to renew the global licensing, and K-pop artists like Epik High saw their music return to the streaming service starting on March 12. The K-pop community rejoiced as they went back to jamming out to their favorite songs. The dispute faded into the background.

This showdown between Spotify and Kakao is a prime example of what happens when two unchecked music streaming services care more about complete control over a market than allowing artists to have their music reach worldwide audiences. Whether Spotify or Kakao got the “better deal” in the new licensing agreement doesn’t matter because, in the end, the only losers were the artists — whose music rights these companies violated — and listeners like you and me. As long as music streaming services continue to “place greed over art” as Tablo tweeted, they will not only affect the K-pop world, but also put other genres’ artists and listeners at risk of losing access to the art itself.