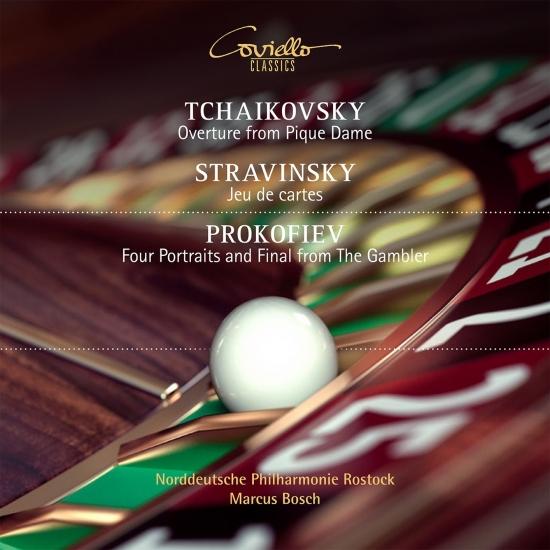 In a world where streaming services like Spotify make most commercial recordings available for quasi-ownership at under $10/month, new classical recordings in particular struggle for relevance. In many cases, critically acclaimed commercial recordings already feature the same pieces. How does an orchestra convince listeners that their version is worth listening to?

Under conductor Marcus Bosch, The North German Philharmonic Rostock’s latest release provides a refreshing take on the classical album. The album of works by Tchaikovsky, Stravinsky, and Prokofiev sidesteps the question of relevance by curating pieces linked by a very specific theme, not one of abstractness like love or death, but instead one of materiality: playing cards. The repertoire mirrors the structure of a performance, beginning with the overture from Tchaikovsky’s opera “Pique Dame,” followed by Stravinsky’s ballet music “Jeu de cartes,” and finally, Prokofiev’s more substantial “Four Portraits and Denouement,” an orchestral suite of music taken from his first mature opera “The Gambler.” Bizarre as the album may look next to its solemn classical counterparts, it is a much-needed break from the monotony of classical recording themes.

Works on classical recordings usually share a composer, country of origin, or featured soloist. Representative examples from the past month include the Los Angeles Philharmonic’s Grammy-winning set of complete Ives symphonies, Paul Lewis and Steven Osborne’s collection of French piano duets, and baritone Ludovic Tézier’s recordings of fourteen Verdi arias with the Opera Orchestra of Bologna.

A theme as narrow as playing cards has an obvious drawback: Few pieces fit it. Rostock reaches into the dusty corners of all three composer’s oeuvres to find the trio of works on the album. When “Pique Dame” is mentioned, most think of the operetta of the same name by von Suppé before the Tchaikovsky opera, and likewise, “Four Portraits and Denouement” is a mostly unknown work by the otherwise famous composer Prokofiev. “Jeu de cartes” is perhaps the least obscure of the three, but still does not rank among Stravinsky’s well-established pieces.

The issue of repertoire choice aside, Rostock successfully presents an unconventional listening experience, challenging listeners to try to “hear” the cards in all three pieces.

Tchaikovsky’s “Pique Dame,” or “Queen of Spades,” is based on Pushkin’s short story of the same name. The overture is slight, coming in at just over three minutes, and struggles to establish a solid structure. Tchaikovsky establishes three successive themes and abandons them just as quickly. The beginning contains recycled material from his Fifth Symphony, completed just one year before “Pique Dame,” and after a brief storm — the likes of which we see in his earlier work “The Tempest — the piece abruptly ends.

The material is typical of Tchaikovsky in all aspects, if condensed. The Rostock recording shows off the particularly dramatic dynamic swells that define the piece, which at one point traverses a dynamic range of “pppp” to “ffff” in just 16 measures. The three minutes cross an impressive emotional spectrum as well — from strong feelings of loneliness to agitation to romance — and Rostock represents the sudden changes in mood well. The climax is an impressive show of orchestral might, and Rostock ensures the various quotations are true to their respective origins.

Next, Stravinsky’s “Jeu de cartes,” or “Game of Cards,” is a short ballet in three “deals” featuring an evil joker, whose eventual defeat represents ordinary people’s occasional triumph over the elite. The piece exhibits Stravinsky’s typical neoclassical style, with a particular emphasis on humor and irony. Rostock achieves chamber music-like sensitivity in every place that calls for it, while also experiencing moments of collective frailty in some of Stravinsky’s more forceful passages. The orchestra lets Stravinsky’s sense of humor shine through without descending into the slapstick. The joker’s character successfully comes through in the music, and while achieving a clownish sound is by no means as easy as it sounds, Rostock’s horn section seems up to the challenge of trying to make a stony-faced classical audience laugh.

Finally, Prokofiev’s “The Gambler” is another opera based on a Russian story, this time one by Dostoevsky. The opera describes a thick web of debtors and creditors, with the roulette wheel as an avenue for both debt forgiveness and further destitution. Prokofiev cut and pasted material from “The Gambler” to create the orchestral suite “Four Portraits and Denouement,” which sketches Dostoevsky’s characters Alexei, Granny, the General, and Paulina. Though he produced the suite later in his life, the music from the opera is solidly early Prokofiev. The busy orchestration includes two harps and piano playing almost continuously, creating a dense, middle-heavy color palette. Rostock succeeds in cleaning up some of the noise to ensure the important voices stand out. “Paulina” is particularly clear in this regard, while the complexities of a spry, slick, and avaricious elderly character come across especially effectively in “Granny.” Rostock flexes its first and third trumpet players through frequent features in Prokofiev’s demanding solos.

The Denouement is an episode of Alexei’s winning streak at the roulette wheel, in which the orchestra approximates the spinning, bouncing ball. This is one place that calls for unreserved, noisy playing, and Rostock’s woodwind players approach this movement with needed energy. The ensuing brass chorale-like melody under the roulette ball ostinato is the apex of the movement’s forceful chaos. The piece ends with a rumble of orchestral thunder, which Rostock faithfully replicates.

The short album — just fifty minutes — is a perfect Saturday listen. It is by no means a giant of the classical repertory, nor does it attempt to be one. In curating a hyper-specific theme, Rostock sets up a half-lighthearted, half-serious mood throughout that very nicely illustrates the two sides of card games and gambling: winning and losing. While the album is by no means light music for poker night, it is worth revisiting after all bets are settled.