‘Moxie’ Review: White Feminism and How Not to Write a Movie 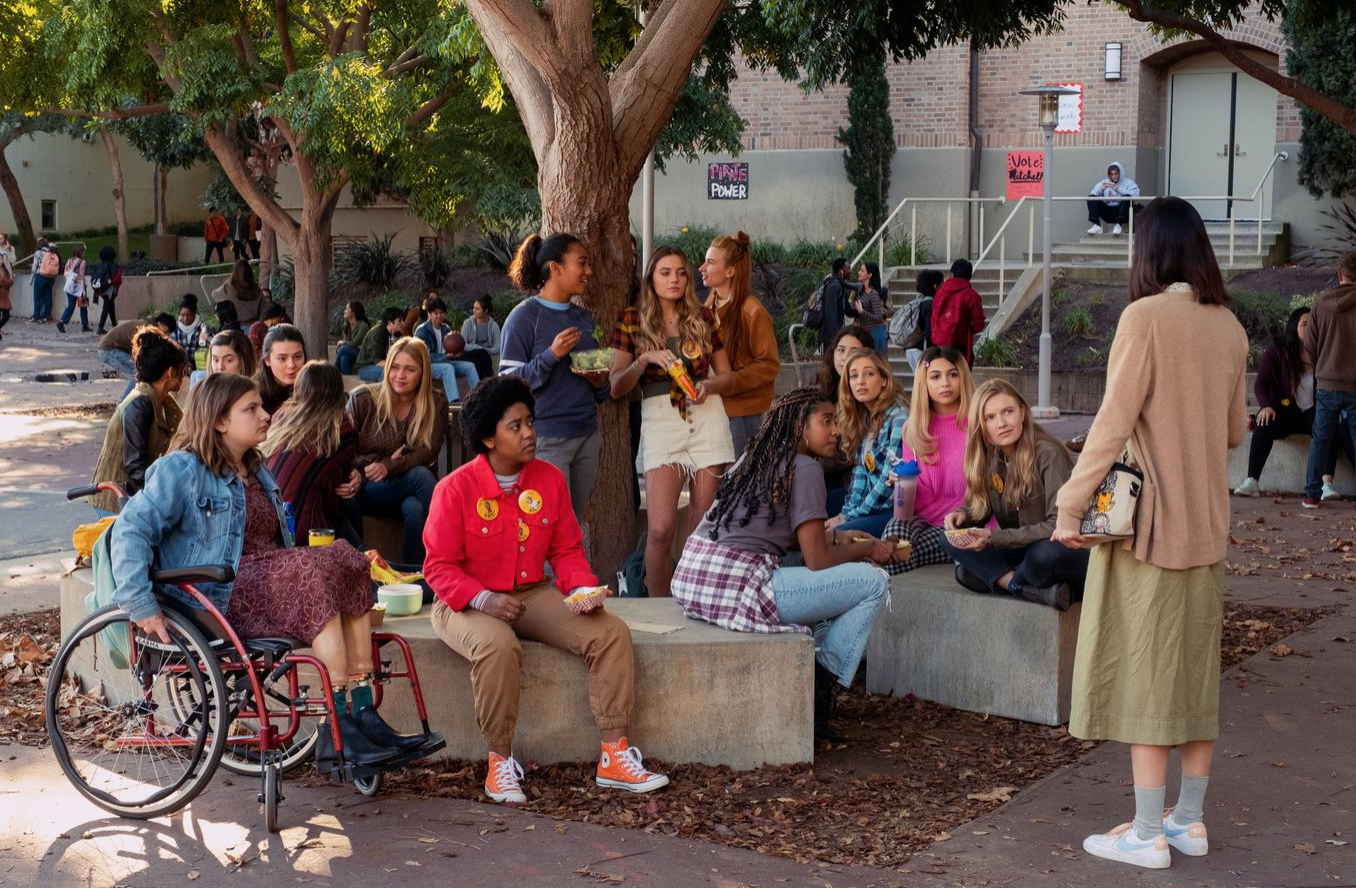 A still from "Moxie" (2021), directed by Amy Poehler. By Courtesy of Netflix
By Hannah Hope Tsai Kim, Contributing Writer

“Moxie,” one of the newest Netflix original movies, attempts to tell an inspiring feminist story, but the end product is yet another microagressive, white feminist narrative — and the whole time, viewers are watching the wrong main character.

“Moxie,” released on March 3, was produced and directed by Amy Poehler, and its screenplay is adapted from Jennifer Mathieu’s young adult novel of the same title. In “Moxie,” high school junior Vivan (Hadley Robinson) becomes aware of the rampant sexism at her school and, inspired by her mother’s rebellious past in the Riot Grrrl Movement, distributes an anonymous zine titled “MOXiE!” setting off a snowball of patriarchy-toppling events. Though the subject matter is topical, the movie falls painfully short in many ways. Ultimately, all of the smaller shortcomings can be traced back to “Moxie”’s central failure: Vivian should not be the main character. Her friend, Lucy, who is dynamic, unapologetically Afro-Latinx (and maybe even queer, too) should have been centered in the film.

“Moxie” is set against the backdrop of the Riot Grrrl Movement, a nationwide movement started in Olympia, Washington in the 1990s, to address sexism in the punk rock scene and create a space for punk rock girls. Vivian’s mother, Lisa, played by Poehler herself, and her friends, took part in the Grrrl movement. It is safe to assume they were all white. In the movie, Lisa admits to Vivian that their activism wasn’t intersectional enough, although this acknowledgement never comes up again later in the film.

A 2015 VICE article written by Gabby Bess explains that “the typical Riot Grrrl, as outlined in an infamous 1992 Newsweek article that defined the movement for the mainstream, was ‘young, white, suburban and middle class.’” Bess’s article was partially a response to NYU’s Riot Grrrl Collection, which holds only one zine by a Black woman, Ramdasha Bikceem. Bess says that “there were black women who imbibed with the spirit of punk in their bones outside the Riot Grrrl movement as well. These women carved their own feminist pathways into the hardcore scene, precisely because they were rendered invisible by the Riot Grrrl movement.” Most notably, punk musician Tamar-kali Brown founded the Sista Grrrl Movement, a series of wild punk-rock shows by and for Black women and girls.

If “Moxie” intended to atone for the exclusivity of the Riot Grrrl Movement, it failed. That is because the story centers around Vivian, a white, able-bodied, straight, cisgender girl that only becomes aware of the issues in her high school because of the harassment and injustice her peers face. “Moxie” should have been about Lucy exploring the legacies of the Sista Grrrls that came before her, such as Ramdasha Bikceem, Tamar-kali, Honeychild Coleman, and Maya Glick. To see Lucy interacting with the archives of Riot Grrrl and beginning to carve out a space at her hostile new school for Black and brown women and femmes to find community would have added nuance to “Moxie”’s otherwise subpar narrative.

Granted, such an initiative would mean rewriting practically every scene, replacing Poehler as director, and hiring Black writers and producers, but, this raises the question, why was this not done in the first place? Again, the movie sought to “correct” the wrongdoings and shortcomings of the Riot Grrrls, whose anti-Blackness and trans-exclusivity have tarnished the movement’s reputation. In that case, the movie should have focused on the intersections of racism and sexism instead of straying away from them and could have done so by foregrounding Lucy’s story.

There is no way to strive towards collective liberation if the leader is a white woman, and Vivian is no exception. This is especially true when nothing bad happens to her in the movie, and it seems she gets to discover injustice is actually real because of the lived traumas of her Black, Asian, disabled, and trans friends.

Now, “Moxie” does well in including these other marginalized identities where Riot Grrrls were often neglectful, but the film tries to take on too much. Representation for the sake of representation is useless when the nuances of these various misogyny-affected identities are not explored. Not once in the movie does Vivian critically engage with her own privilege as a white cis woman. It is equally appalling to think Poehler and her writers thought their job was done by using “intersectional” simply as a buzz word and throwing in minority characters whose complexities are never explored.

However, Vivian is not the problem: Instead, she is a symptom of white supremacy. It is important to bring “Moxie” into a larger conversation on white feminism. White misogyny-affected people still benefit from white supremacy, but many of them are reluctant to acknowledge their positions of power. This only perpetuates white supremacy.

White feminists also participate in a co-option and a violent erasure of Black, Indigenous, and People of Color’s (BIPOC) struggles within feminist spaces. It is ultimately Vivian who completes the final redeeming act — all by herself — and reveals herself as “MOXiE!”, giving no credit to Lucy or any of the other “MOXiE!” girls, only further cementing the white savior themes of the movie.

While the loose ends to Vivian’s advocacy are now neatly tied, the other “MOXiE!” girls continue to face oppression from all sides. In fact, in the background of Vivian’s reconciliation scene with her mother, best friend Claudia (Lauren Tsai), and boyfriend Seth (Nico Hiraga), Lucy is speaking to the crowd, but she has no audio. The camera, the editing, and the story, render Lucy dispensable. Silenced. Where is the feminist inspiration in that?

Some may take these points as too harsh, but the question remains: who is “Moxie” for? The most obvious answer is white women seeking validation for their “activism.” It is not for women of color; it is not for trans women; it is not for fat, disabled, or neurodivergent women. It is also likely not the last of the “white feminism” media genre, so be warned: “Moxie” is not liberation.