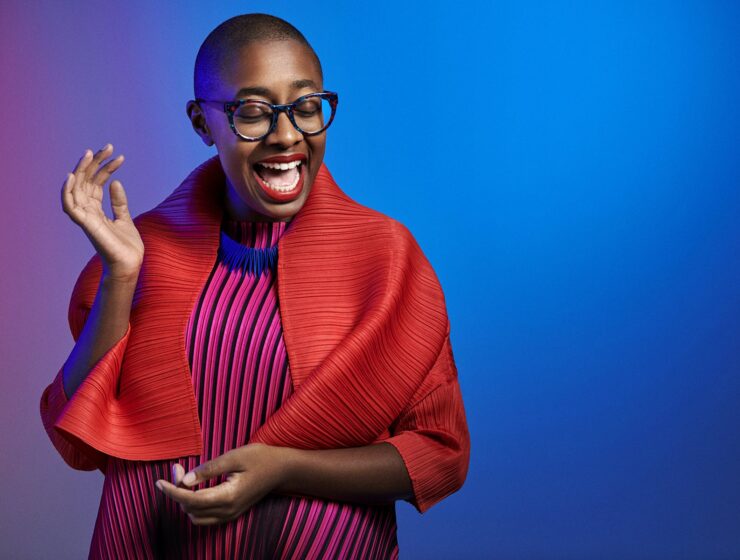 Cécile McLorin Salvant By Courtesy of The Office For the Arts at Harvard
By Aarya A. Kaushik, Contributing Writer

“I think I always wanted to be telling stories in some way,” the Grammy-award winning musician Cécile Mclorin Salvant said to a Zoom room of wide-eyed Harvard students.

Music 188R, a creative music class taught by Yosvany Terry and Vijay Iyer, welcomed Salvant to Harvard on Feb. 23 as part of the Spring 2021 Jazz Conversations series. Entitled ‘Composer-Performers of the African Diaspora’, the course was created “as an opportunity to expose students to the contributions” of modern Black musicians so they could “learn about music in a historical and social context,” said Dr. Terry.

Miss Salvant’s energy is inimitable. Her musical aesthetic defies categorization, influenced and directed by the cultures of America, Haiti, and France. However, during the event she opened up about “the guilt of the diaspora,” sharing that a younger version of herself often felt like a “stranger in [her] own home.” This insecurity (and her willingness to talk about it) was compelling to and appreciated by students.

For Devon N. Gates ’23, getting to hear about how Salvant thinks about her “positionality as a Black female artist” was emotionally engaging; she added that she was impressed by the way Salvant confronted difficult issues in “spaces that normally don’t have these discussions.”

Gates singles out a real problem: Jazz is historically male-dominated and systematically neglects the voices of women music-makers. But Salvant has centered these women — her musical ancestors — in her artistry. “She’s pushing for an understanding of a history that has been invisible for many years; she is remarkably sensitive to that, and that’s what makes a difference,” said Dr. Terry.

Bessie Smith, Ma Rainey, Nina Simone, the list goes on and on: Dr. Terry acknowledged the rich presence of Black women in jazz historically and currently. “The line of singers [Salvant’s] connected to were all activists,” Dr. Terry said. “Their commitment to using the role of jazz as an American template for democracy has been incredible, and she’s very conscious of that.”

Miss Salvant’s commitment to raising up women of color in jazz, past and present — including herself — shone throughout the event. Miela M. Foster ‘21 said, “It’s hard to see authenticity sometimes in guest speakers and lecturers, so this was a very refreshing change.” Miss Salvant even moved her camera around her rooms, allowing students into her creative space. A painting that hung over her piano was passionately explained to be her main influence for ‘Ogresse.’ This led her to a discussion of Afro-Caribbean cosmogony and vodou, which have been influential in both her personal and musical development.

Foster commented that “[Salvant] really takes her art from everywhere, and it was so cool to hear where she draws inspiration from for her music.” Miss Salvant said she’s “constantly looking for surprise” in her work, which perhaps accounts for the ever-growing mosaic of her artistry.

“What would have been the course I always wanted to take but was never offered?” This was the guiding question for Dr. Terry as he worked with Dr. Iyer to design the framework of Music 188R, which is the culmination of years-long ideation. He said the idea of a Composer-Performer is “normal for everyone in jazz,” but often misconstrued outside of the jazz sphere as disconnected.

Students in Music 188R study the work of six modern Black Composer-Performers: Henry Threadgill, Cécile Mclorin Salvant, Esperanza Spalding, Gonzalo Rubalcaba, Nicole Mitchell, and Tyshawn Sorey. The brilliance threaded through this lineup is real; Dr. Terry explained that they are all working with “improvised music in completely different scenes” and developing a “sonic universe” likely unfamiliar to most students.

Foster said she was especially drawn to this class because of the African and African-diasporic musicians centered in the syllabus — unfortunately a rare occurrence in academia — which has led to her having many “internal conversations with myself about identity.” As a spring semester senior, she called Music 188R “a last chance class,” expressing that it has been an exploratory and enriching experience for her.

Another positive outcome of the event: Gates recounted how she had emailed Professor Iyer to see if he could ask Miss Salvant for sheet music for “Somehow I Never Could Believe,” an aria from Kurt Weil’s “Street Scene,” which Salvant rearranged and recorded on her 2017 album “Dreams and Daggers.” He agreed, and Miss Salvant did, too: She sent over sheet music for her original arrangement of the song. Gates expressed her “crazy” gratitude for both Professor Iyer and Miss Salvant’s kindness: “I would have had to transcribe the whole ten minute song; now I have the sheet music the way she intended for it to be played.”

“First and foremost, I’m someone who consumes art, who loves art.” This statement, honest and passionate, cements Miss Salvant’s identity as raconteur. That was the goal of hosting this event, according to Dr. Terry: “By creating spaces where a master musician can be vulnerable with students…we hope to foster the sense of engagement and community that music can bring.”