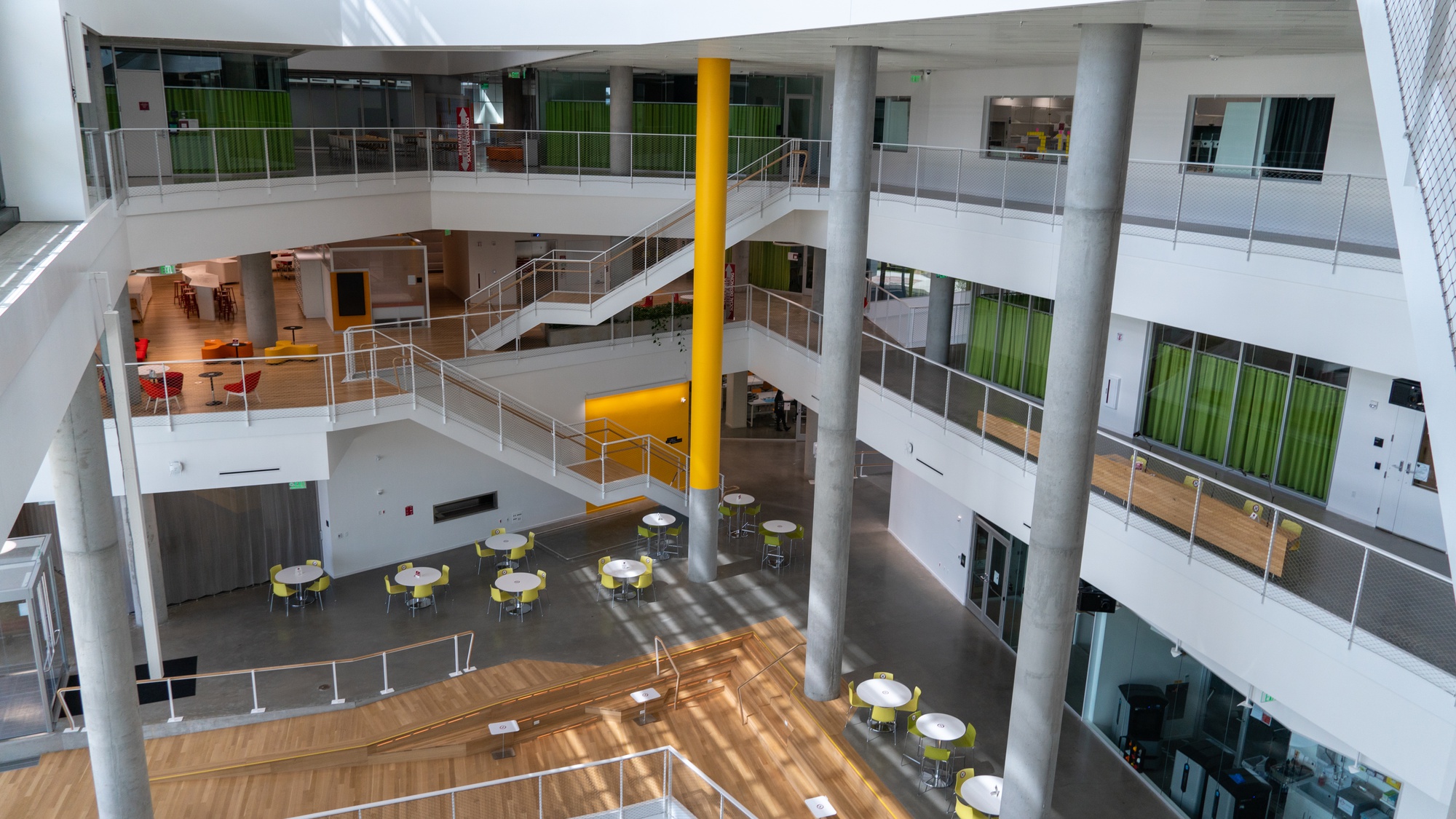 Though most students, faculty, and staff do not yet have access to Harvard’s new Science and Engineering Complex due to Covid-19 restrictions, The Crimson was granted access to tour the eight-story SEC Monday, guided by School of Engineering and Applied Sciences spokesperson Paul Karoff.

Situated across more than five acres with a maximum occupancy of around 2,000 people, the SEC plans for a full opening to students in fall 2021. Construction for the complex started more than five years ago and cost roughly $1 billion to complete. Faculty at SEAS started their move into the new building in Allston in November 2020, but most have yet to unpack their belongings.

Here is a brief look, in photos, of the SEC’s features, study spaces, and classrooms students can look forward to. 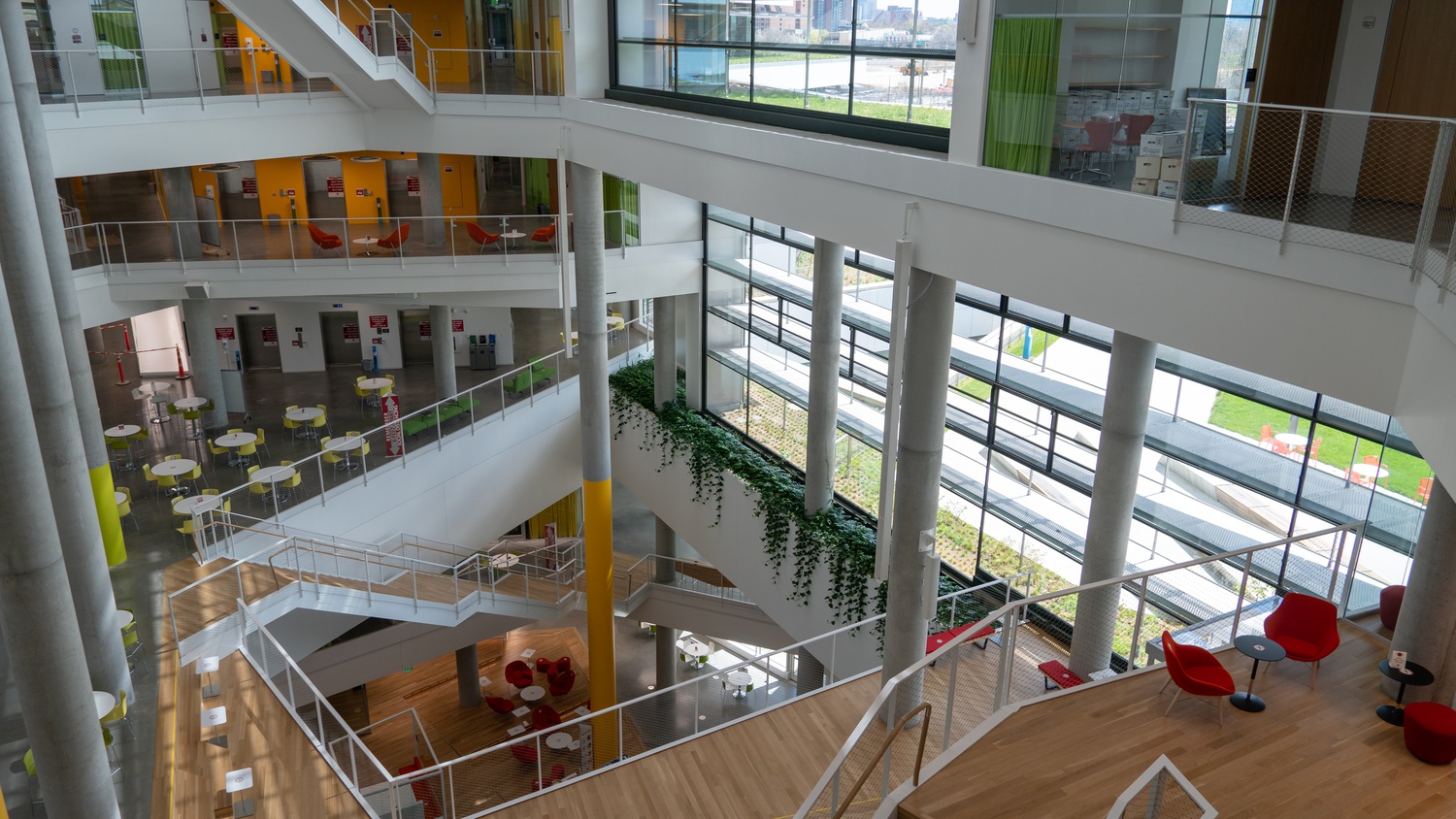 The larger atrium runs six stories up and two stories below ground. It features retractable projector screens for events and large windows which let in natural light. By Zadoc I. N. Gee

The SEC — which is roughly the length of a block in New York City — has two atria, the larger of which goes six stories up and two stories down. In a February interview, SEAS Dean Francis J. Doyle III said the building was designed with “serendipitous collisions” in mind, evidenced by the crisscrossing passageways and lines of sight across the building.

Karoff said the atria were designed to be a “vertical version” of Harvard Yard, where one can spot classmates up and down the SEC’s eight floors from many vantage points. 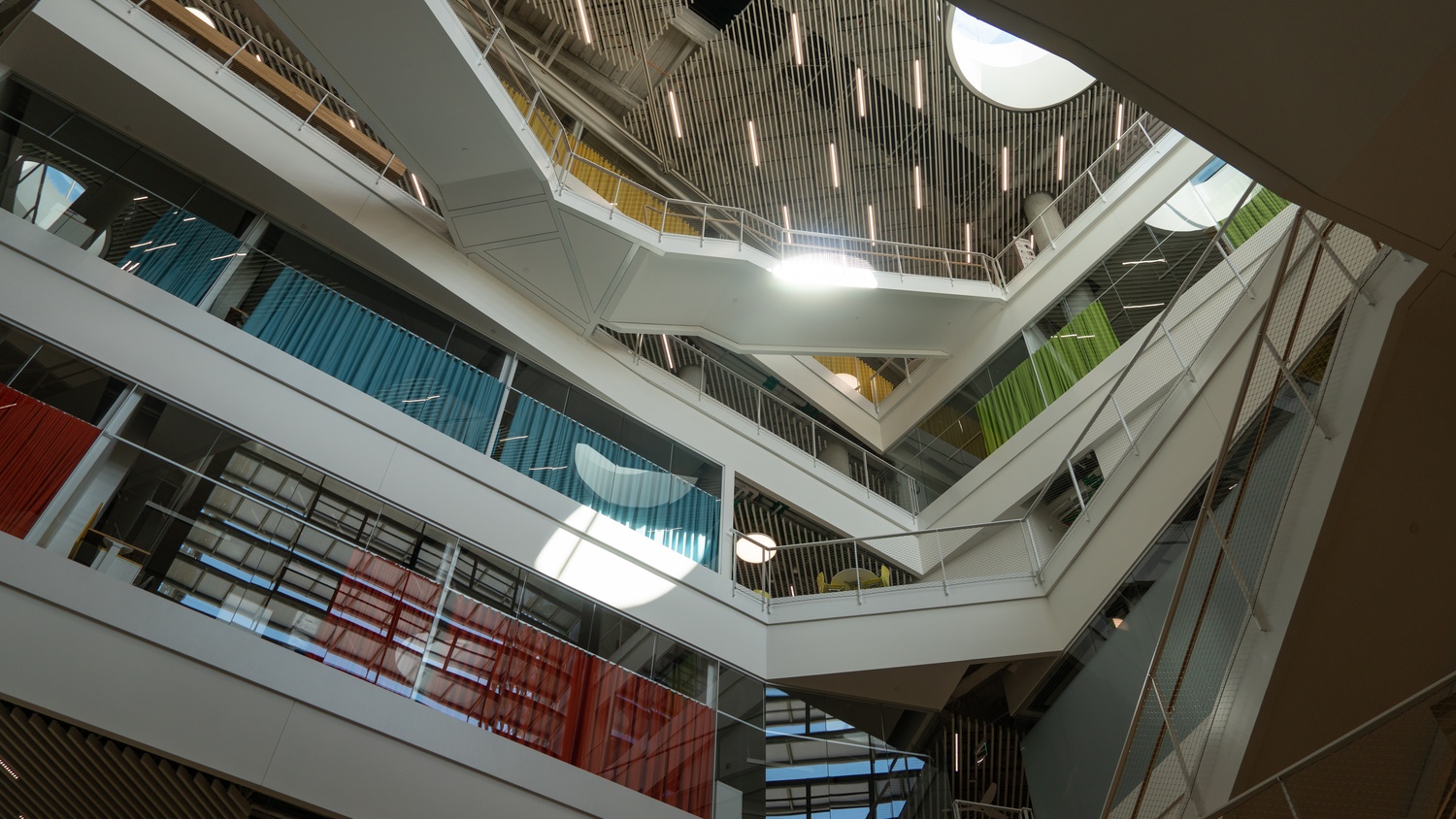 Like the larger atrium, the smaller atrium pictured here is designed to facilitate student interaction through its crisscrossing passageways. By Zadoc I. N. Gee

The building is marked by huge glass windows and porthole-esque skylights that naturally brighten the SEC during the day. The SEC is covered by a permanent exoskeleton designed to both keep the building cool in the summer and retain heat in colder months.

With two retractable projector screens, the main atrium can also serve as an event space. 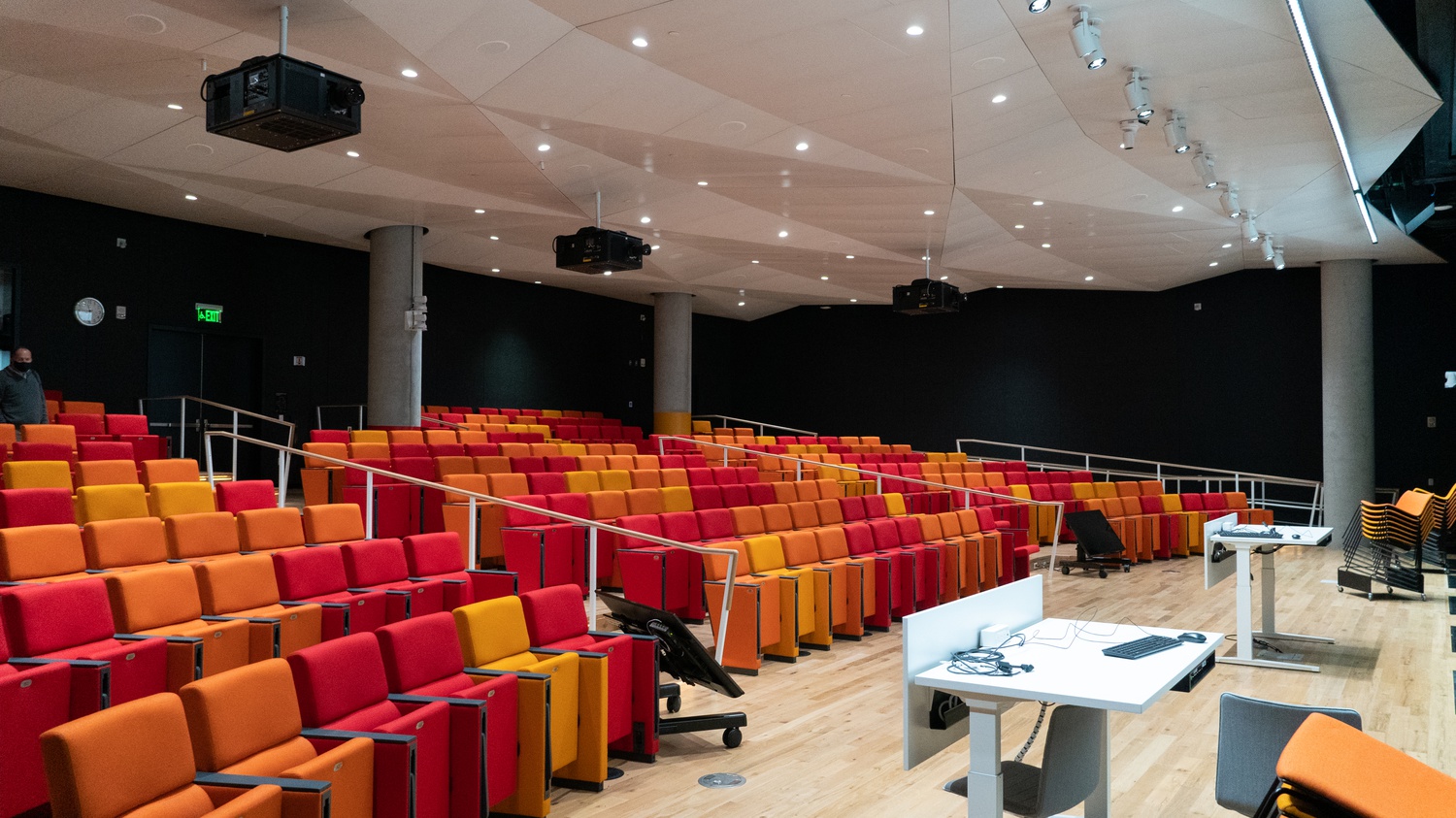 The SEC's largest lecture hall seats 300 occupants. It features its own audiovisual control room, projectors, and chalkboards. By Zadoc I. N. Gee

The building contains four large lecture halls — 300-person, 100-person, 70-person, and 50-person rooms — all with a new car smell. The largest of which has its own audiovisual control room. Each lecture hall has “state-of-the-art” instructional technology along with traditional chalkboards, a faculty favorite, according to Karoff.

Many classrooms are also equipped with walls made of privacy glass, which can turn opaque using a toggle switch on the wall.

In an email, Karoff described seven of the classrooms as “flat” and “flexible,” with movable tables and chairs, the largest of which can hold up to 96 students. The SEC also holds six 24-person seminar rooms. 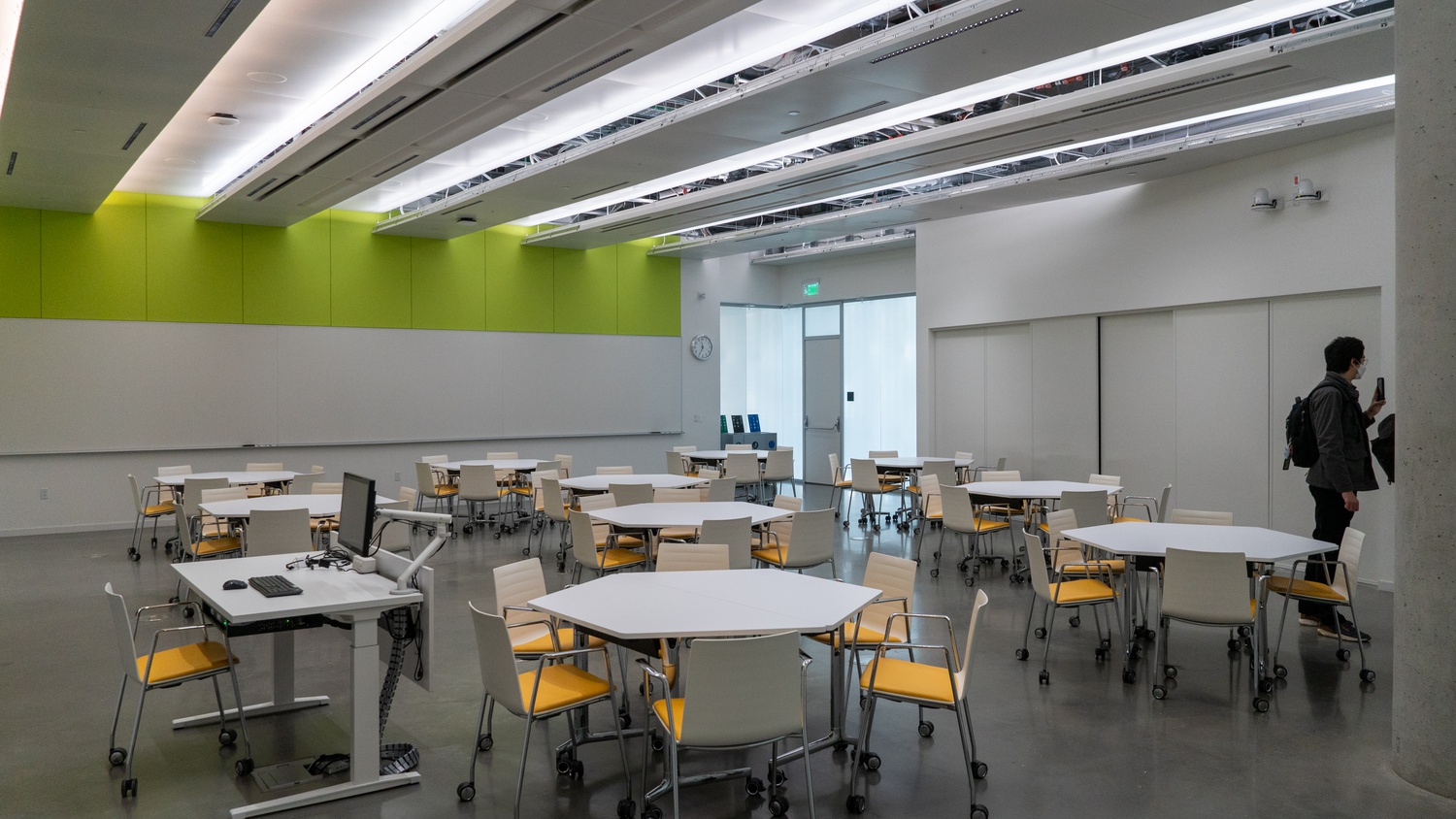 The seven 'flat, flexible' classrooms allow faculty to rearrange the room for their classes. Some feature privacy glass windows that can switch between clear and opaque, like those pictured in the background. By Zadoc I. N. Gee

While the building will mostly house engineering students, Karoff noted SEAS has only allocated around 50 percent of classroom space in the hope that faculty and students in other Faculty of Arts and Sciences divisions and other schools will use additional spaces in the building, especially as shuttle bus services expand. 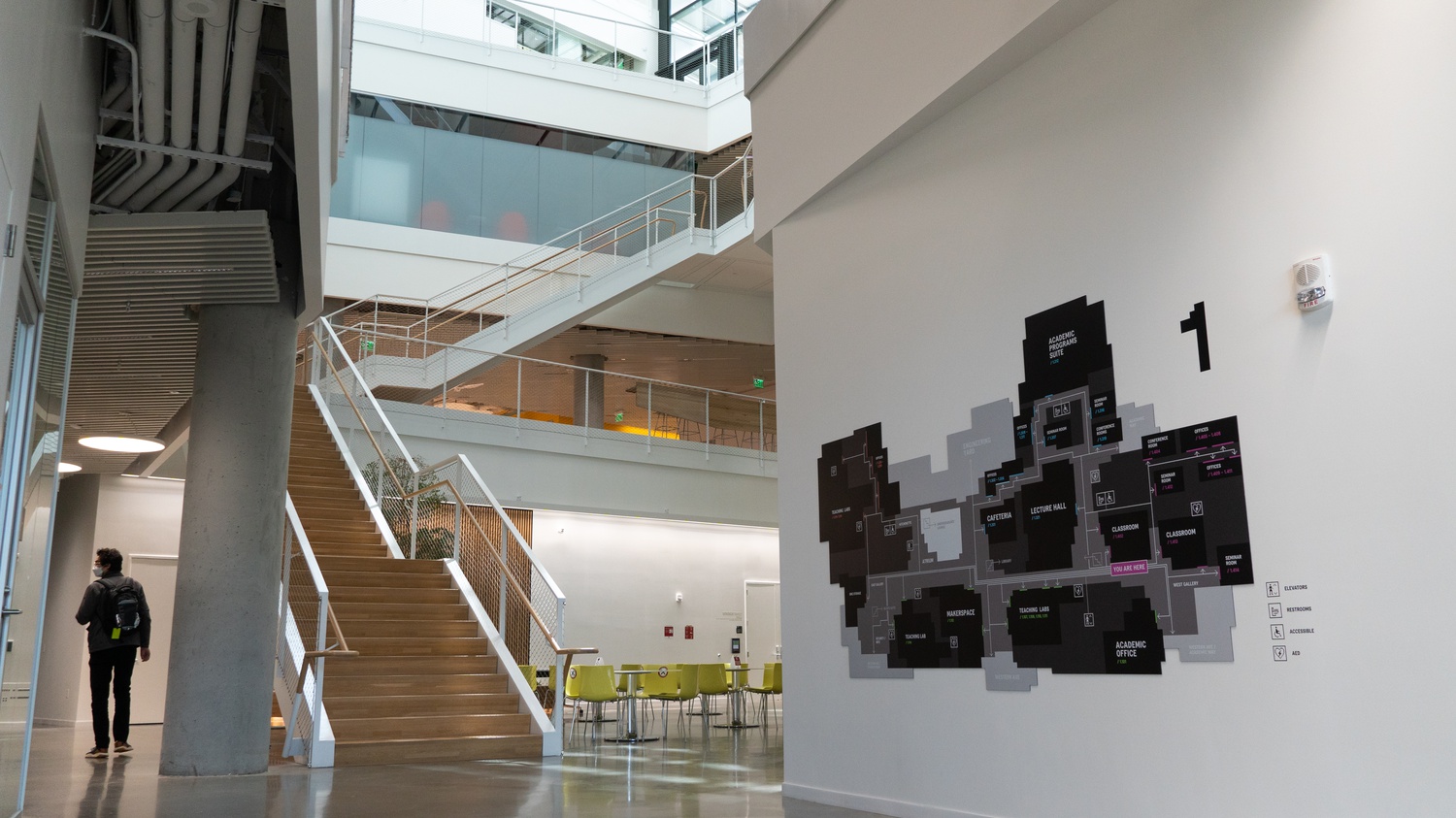 One of the various maps of the floor plan is displayed on the ground floor in the smaller atrium. Many versions of these maps can be found across the large building. By Zadoc I. N. Gee

The complex contains a servery which will be open to students on the meal plan, in addition to kitchenettes spread throughout the building.

The second floor will also feature an engineering library, which will hold some physical collections, to join the greater Harvard Library system.

Floors four to six above ground will primarily hold faculty and staff offices, while the bottom two floors will hold more student-centered spaces. 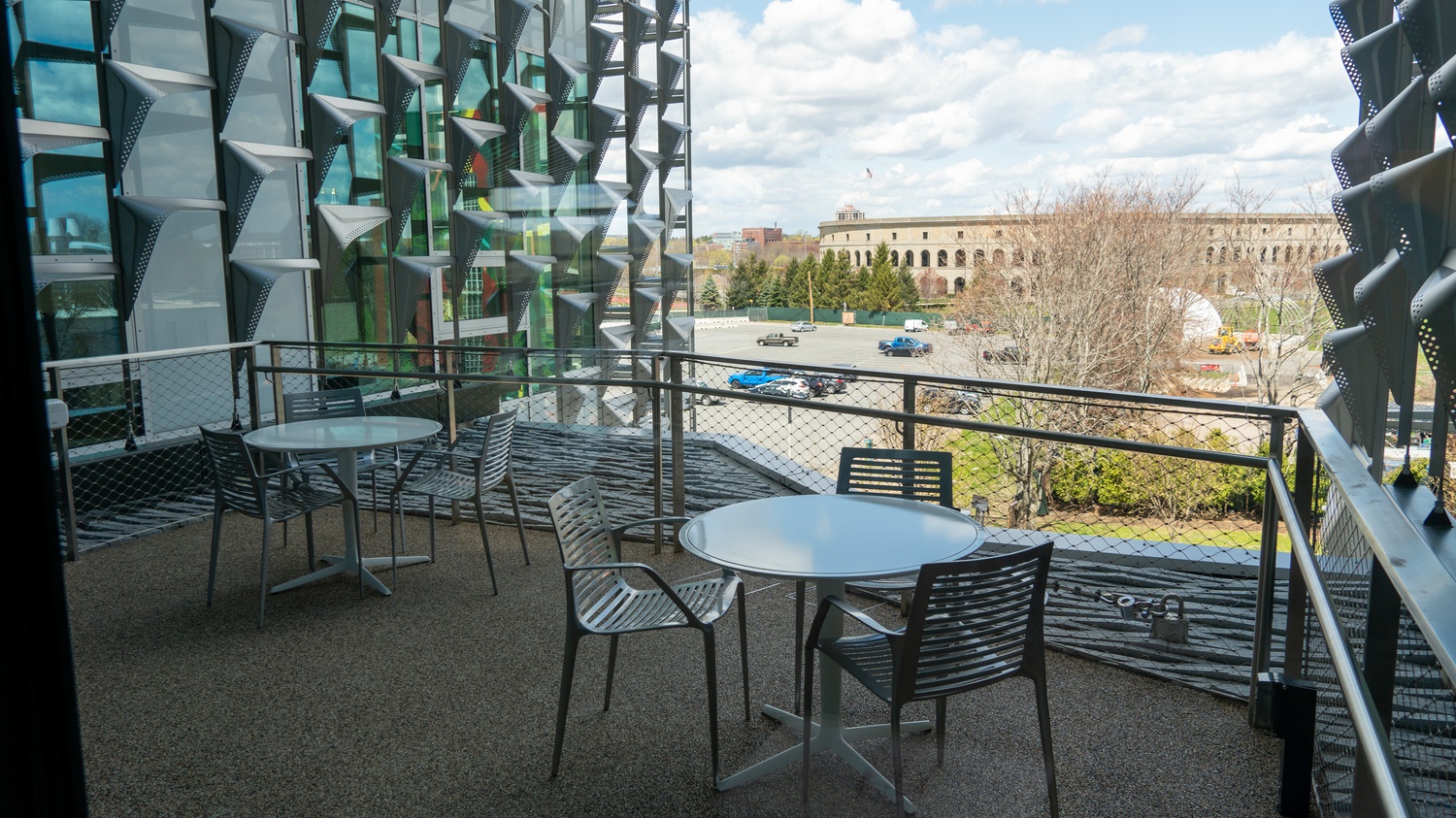 One of the SEC's several outdoor balconies overlooks the nearby Harvard Stadium, facing north-northwest. By Zadoc I. N. Gee

The complex also has several outdoor patios and greenspace terraces that overlook Allston, Harvard Stadium, and the distant Boston skyline. 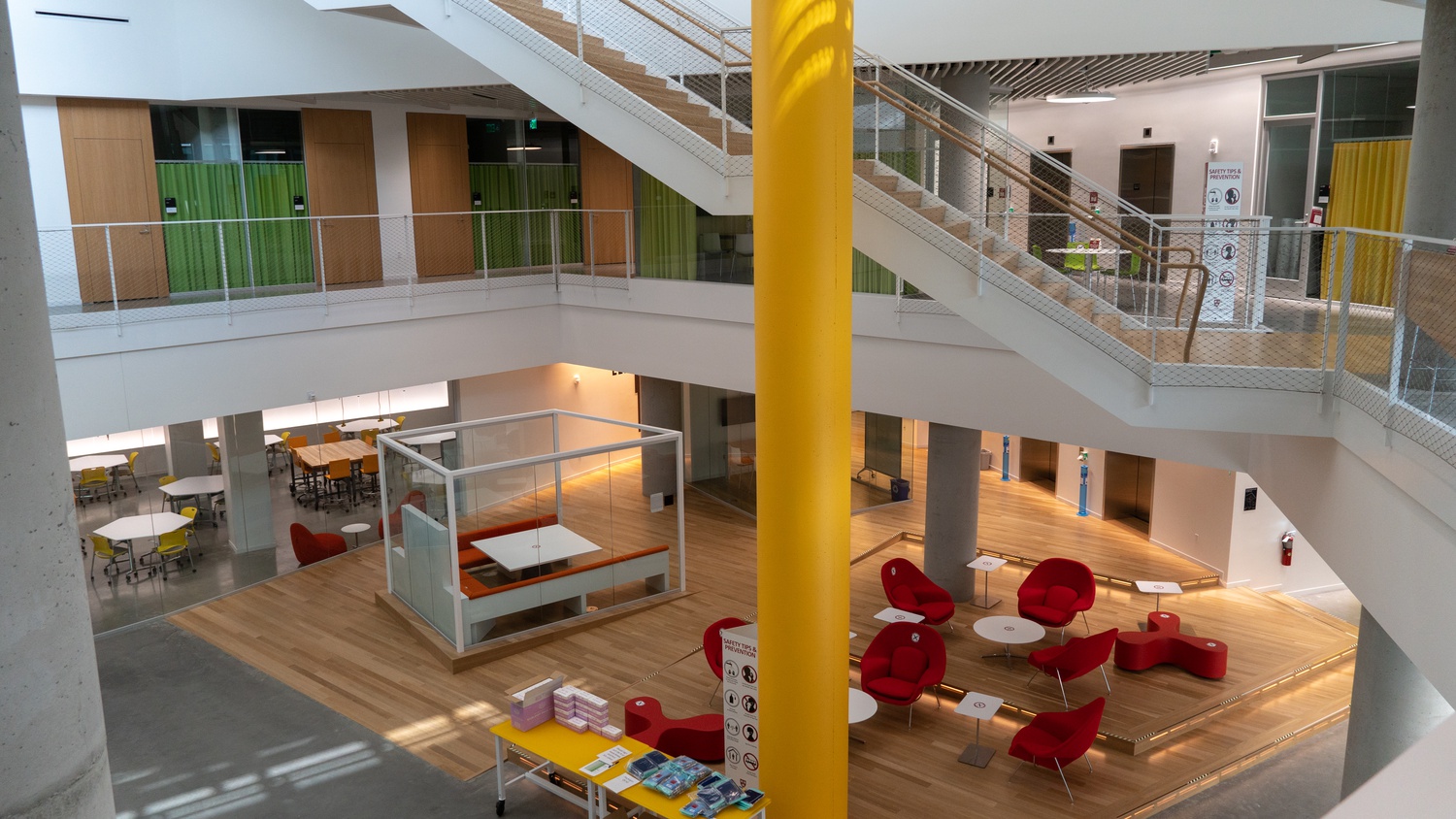 The central open space of the bottom floor serves as a dedicated study lounge for undergraduates. By Zadoc I. N. Gee

The main floor features a reimagined Active Learning Labs, a student makerspace originally in Pierce Hall, outfitted with new machines and tools. The center of the bottom floor serves as a dedicated study lounge for undergraduates. 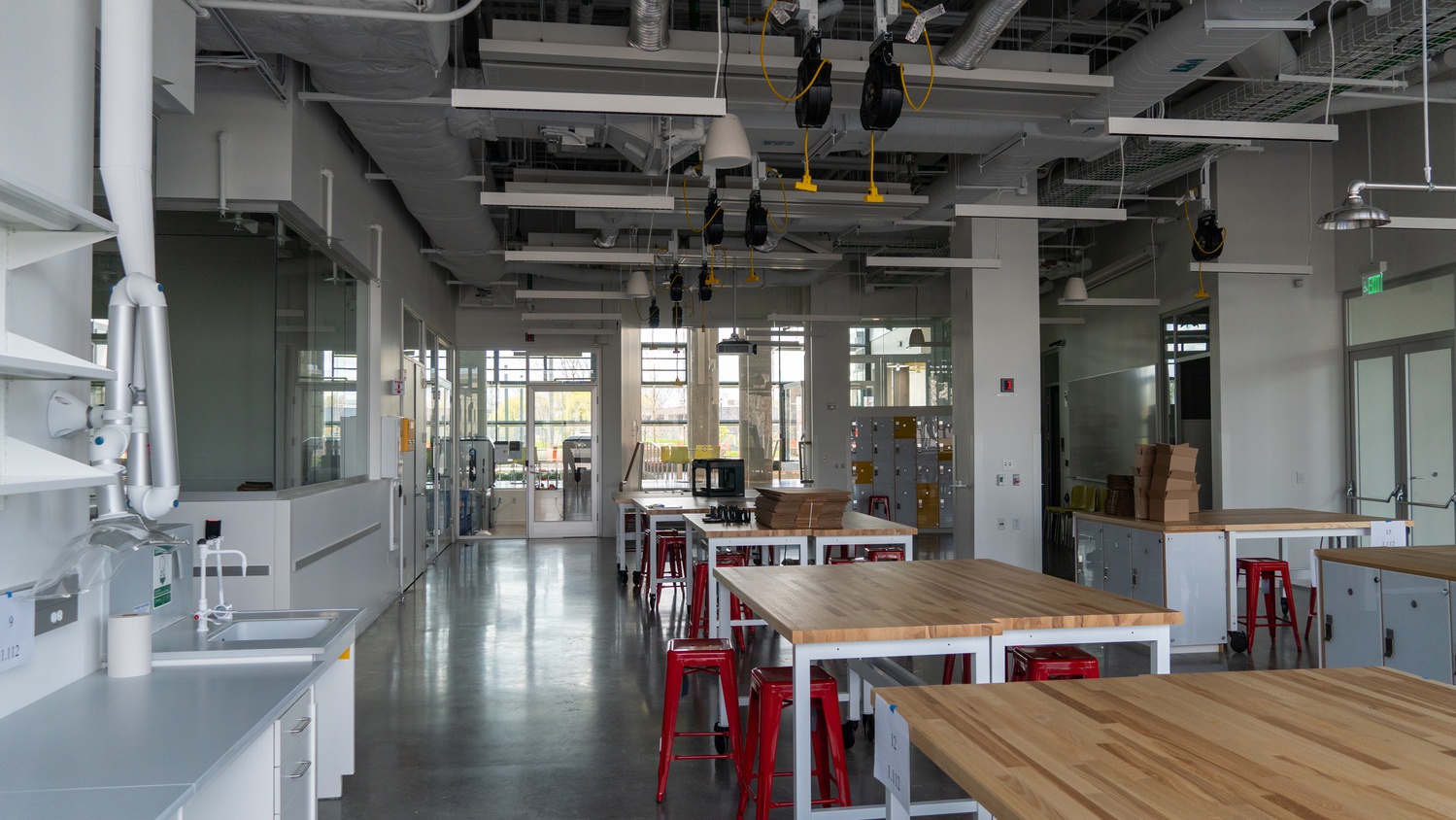 One section of the new Active Learning Labs, found on the first floor, is outfitted with new makerspace tools and machinery. By Zadoc I. N. Gee

Adjacent to the bottom floor lobby is a “clubhouse,” Karoff said, or a makerspace dedicated entirely for student clubs and their engineering-related projects. The only other dedicated space on campus for undergraduate clubs is the Student Organization Center at Hilles, abbreviated as the SOCH, near the Quad houses in Cambridge. 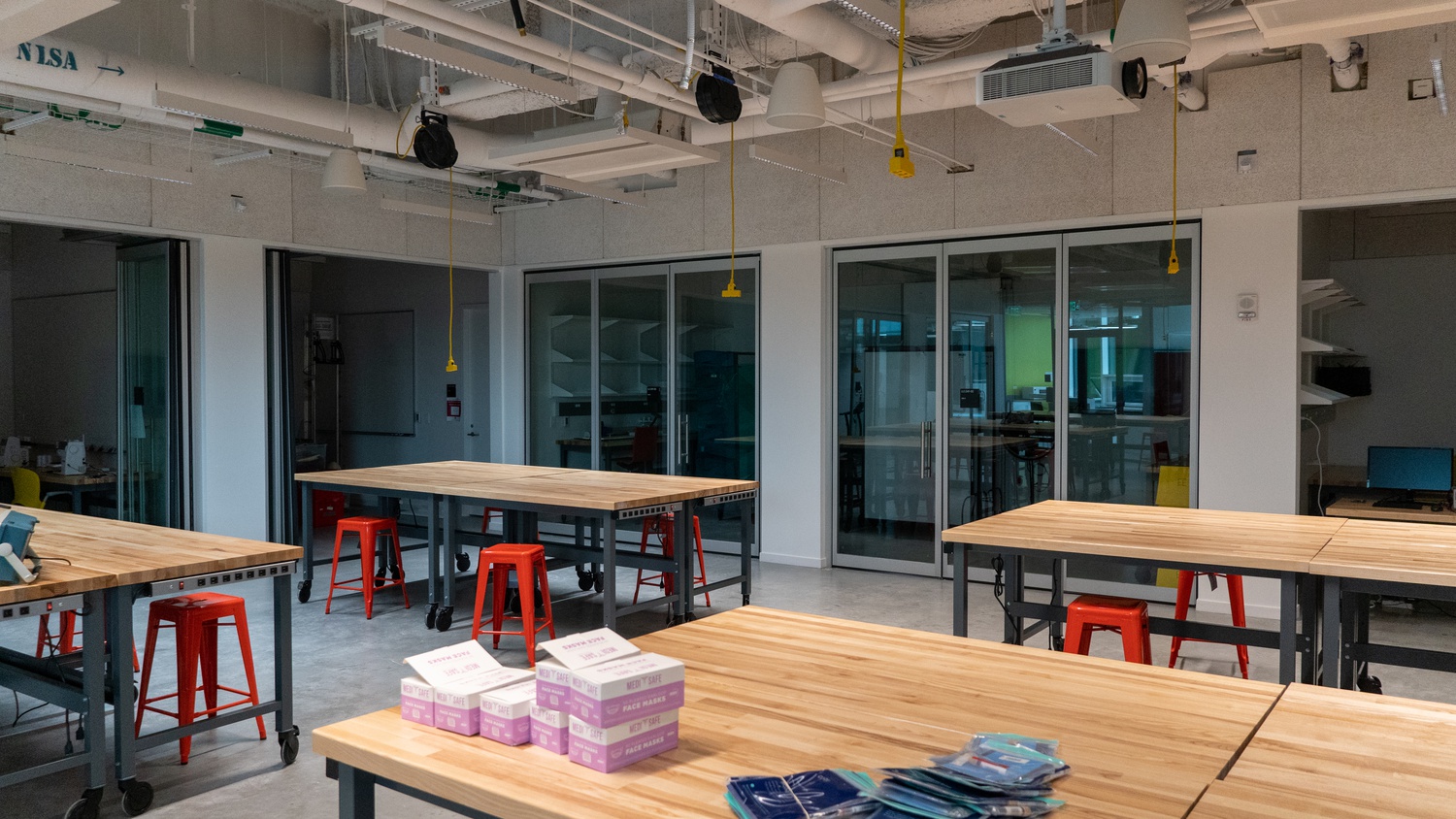 Adjacent to the bottom floor lobby is a 'clubhouse,' a makerspace dedicated entirely for student clubs and their engineering-related projects. By Zadoc I. N. Gee

The walls of the SEC hold art commissioned for the space, most noticeably “Harvard Time Capsule,” designed by BREAKFAST, a Brooklyn-based artist collective. BREAKFAST constructed the piece using original “Flip-Discs” — electromagnets serving as mechanical pixels that rotate from one side to another — to capture portions of thousands of interactions between passersby that will replay on the wall across the years. 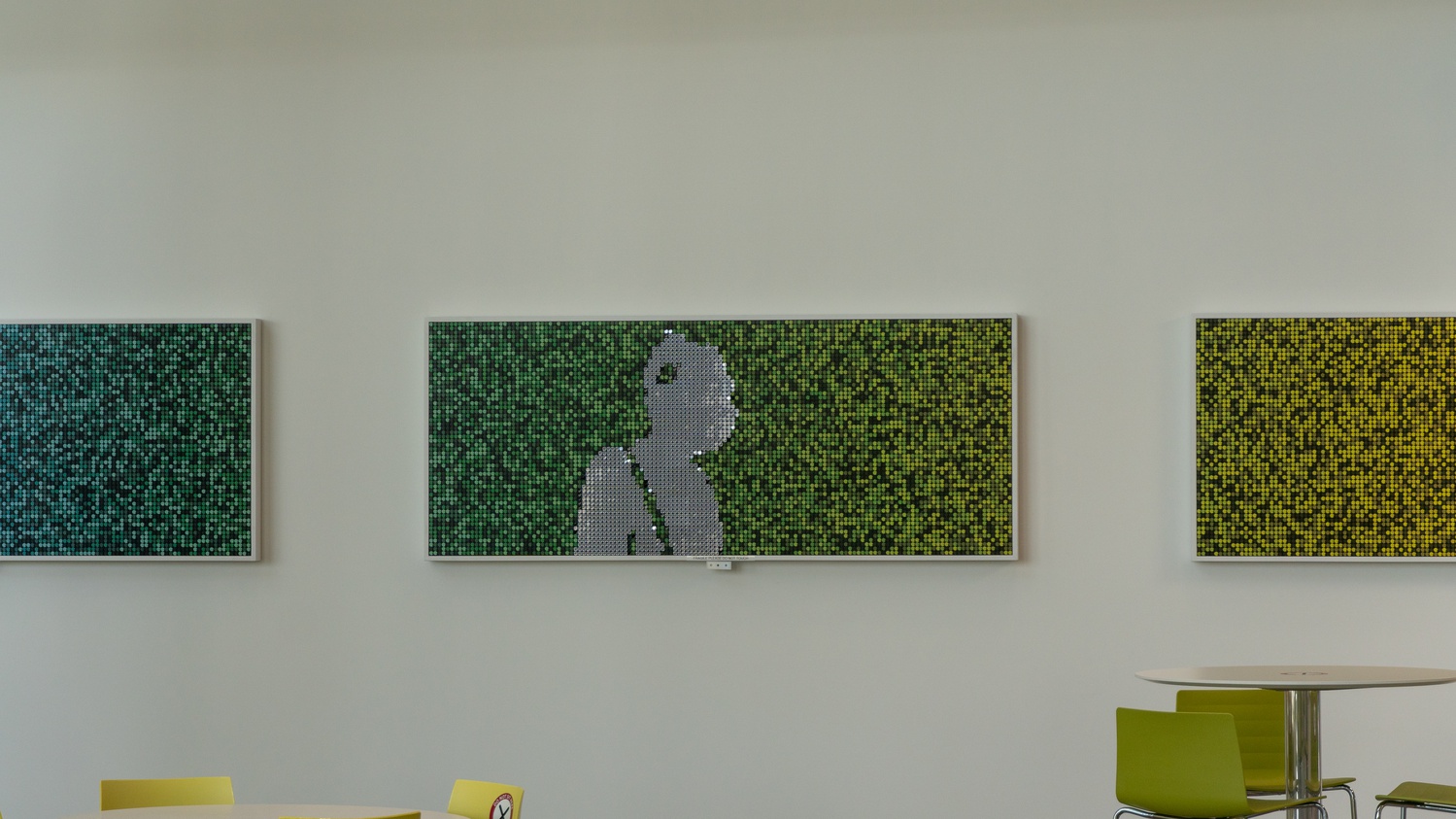 'Harvard Time Capsule' captures portions of thousands of interactions between passersby and replays them on the wall in kinetic motion using 'Flip-Discs.' By Zadoc I. N. Gee

Karoff said SEAS will soon install an exhibit of faculty research, a timeline wall of SEAS history, and the massive 1944 Mark I computer originally housed in the Science Center. 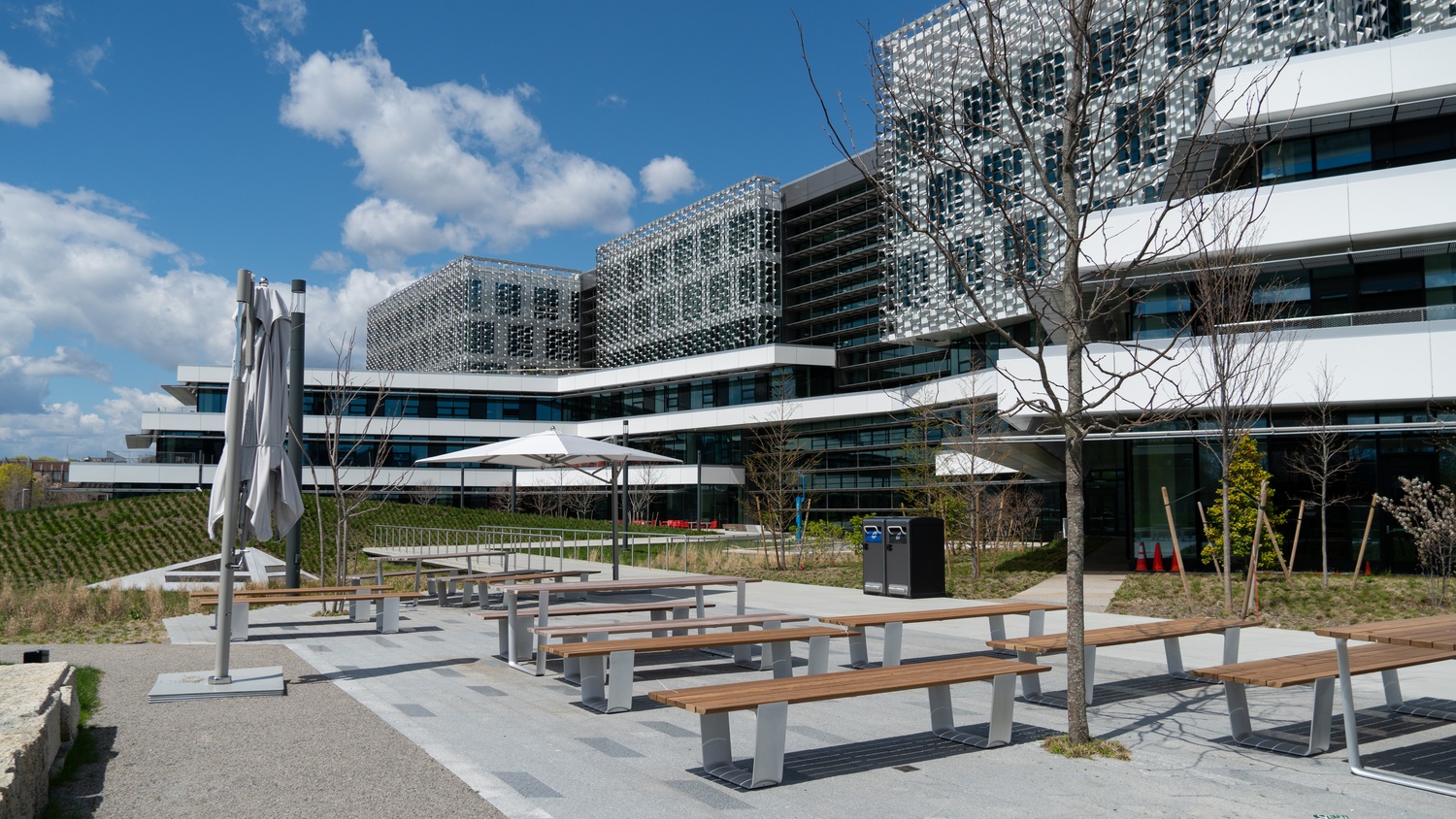 The landscaped Engineering Yard on the south side of the complex has outdoor study space, and can also function as an amphitheater. By Zadoc I. N. Gee

Karoff said the Engineering Yard — the greenspace in front of the south entrance of the SEC — is designated to function as both an outdoor study space and amphitheater. 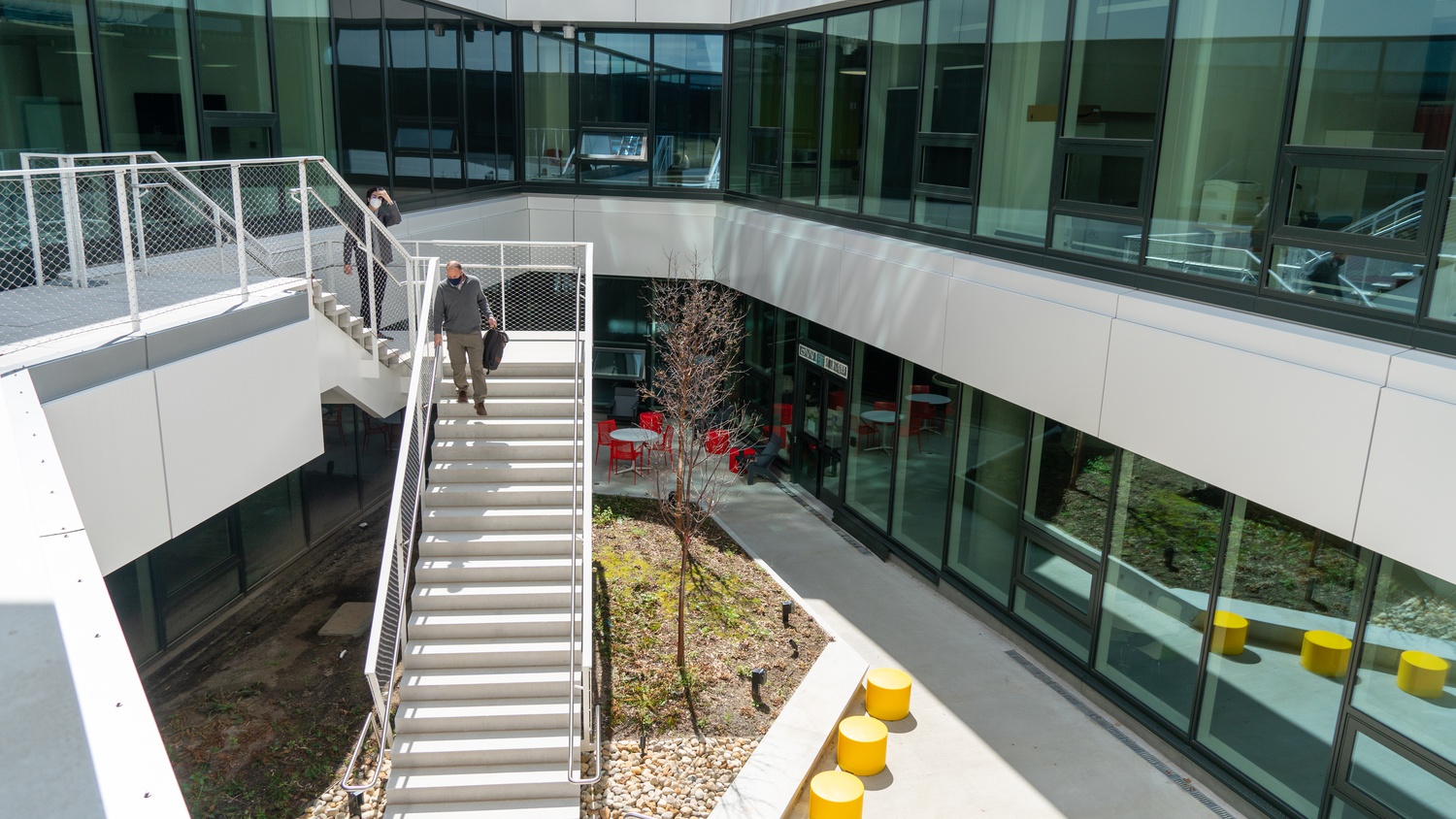 Similar to the sunken tree of Pusey Library, the SEC features a subterranean outdoor courtyard that opens up to surface level. By Zadoc I. N. Gee

He added that saplings derived from the historic beech trees that have long grown outside of Pierce Hall — the original home of SEAS — will be planted in the Engineering Yard. In addition, rubbled concrete slabs from the historical scrapyard the SEC site was built upon have been repurposed as some outdoor benches, according to Karoff.

Though some students will have limited lab access to the building over the summer, Karoff emphasized that the goal for students to officially enter the complex is fall 2021.