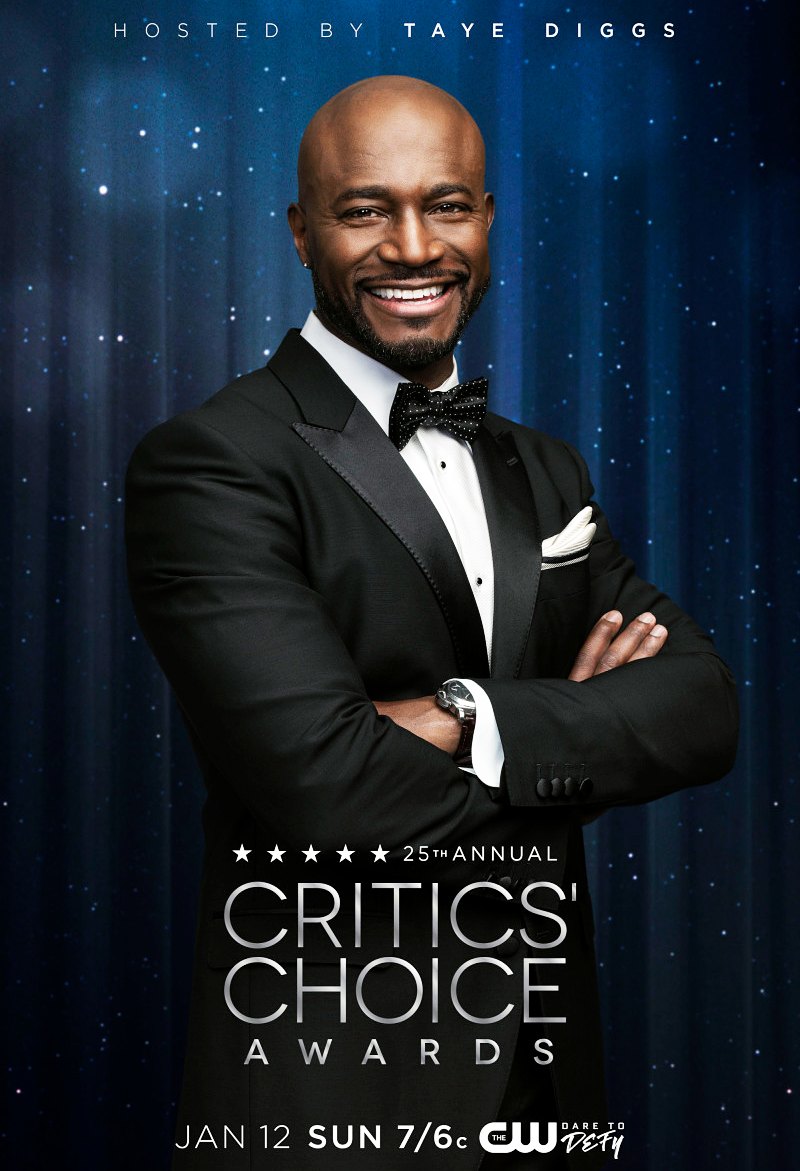 “A word of caution: Some of you may think you can get away with being naked from the waist down. Based on personal experience, I would advise against it.”

In a skit about how to look your best while teleconferencing, Roy Wood Jr. poked fun at the virtual format of the 26th Annual Critics’ Choice Awards, which took place on March 7. Following suit with other awards shows, this year’s ceremony was partially in-person and partially virtual, with Taye Diggs hosting from Santa Monica while presenters and nominees tuned in from around the globe. The digital format meant that the show’s usual pomp and circumstance were necessarily replaced with canned applause, awkwardly-paced interviews, and video call fumbles caused by faulty internet connection (celebrities, they’re just like us!). And though the disembodied “Virtual Tables'' of actors and actresses showed us firsthand that glamorous attire doesn’t ameliorate the awkwardness of Zoom socializing, the show went on, recognizing achievements across film and television over the past year.

The forgotten sibling of awards season, the CCAs don’t tend to field much press. Nevertheless, the ceremony has consistently proven to be one of the most accurate predictors of Oscars success in terms of nominations and wins, and with the Oscars postponed until April, there’s still ample time for predictions. But ratings for even the most “prestigious” awards shows have been on a steep downward trend in recent years, and a global pandemic has, of course, upended most conventions of the entertainment industry over the past year. Moviegoing has dwindled due to production shutdowns and stalled release dates, and even with expanding streaming services, most people likely haven’t had the opportunity to see a majority of film entries. With interest in awards shows at an all-time low, and box office metrics largely irrelevant as a predictive tool, do the CCAs even tell us anything? And does it matter whether or not they do?

What this year’s Critics Choice Awards did do was deliver a show whose nominees and winners possibly signal small movements in the right direction for diversity and inclusion in Hollywood. The CCAs indicate that marginalized artists might receive the appreciation they deserve at this year’s Oscars — or so viewers can hope.

On the television front, the CCAs proceeded as expected. The show swept through its small-screen nominees with few surprises: Netflix’s “The Crown” led the pack in both nominations and wins, taking home Best Drama Series on top of three acting nominations for Josh O’Connor, Emma Corrin, and Gillian Anderson. Awards season favorite “Schitt’s Creek” carried nominations in the comedy categories and secured wins for both Daniel Levy and Catherine O’Hara.

But the show also corrected some of the Golden Globes’ most dubious nominee choices in its own list of nominees: The HBO series “I May Destroy You” picked up a nomination for Best Limited Series, after an incomprehensible snub at the Globes. Creator Michaela Coel, at long last, received recognition for her starring role in the show, appearing in the Critics Choice Best Actress in a Limited Series race. The Critics Choice Awards’ nominees list also showed some much-deserved love to the cast of “Lovecraft County,” who went largely unrecognized at the Golden Globes. This time around, four actors received nominations and Michael K. Williams took home the prize for Best Supporting Actor in a Drama Series for his work in the show.

Wishful thinking though it may be, the CCAs nominees and winners in its film categories seem to foretell a diverse cohort of nominees and storytellers come The Oscars. Well-positioned to pick up Oscar wins is Chloe Zhao’s “Nomadland.” Zhao’s ambient and reflective vignette took home several awards at the CCAs, including Best Picture, Best Director, and Best Adapted Screenplay, and slid easily into the Oscars’ Best Picture race. Additional CCAs nominations for acting (Best Actress for Frances McDormand), cinematography, and other technical categories at the CCAs indicate that the film, whose stylistic intrigue lies in Zhao’s skillful blurring of narrative cinema and documentary filmmaking, is well-deserving of its six oscar nominations. And Zhao’s Oscar nomination for Best Director has cemented a very exciting, very much overdue milestone in Oscars history: Zhao has become the first woman of color to receive a Best Director nomination at the Oscars.

Lee Isaac Chung’s “Minari'' racked up 10 total nominations at the Critics Choice Awards, was awarded Best Foreign Language Film, and saw newcomer Alan Kim take home the prize for Best Young Actor/Actress (The eight year old’s tearful acceptance speech was undoubtedly a highlight of the night and an adorable splash of genuine energy amidst a ceremony stilted by Zoom fatigue.) The Critics Choice Association seemed to appreciate Chung’s poignant tale of immigration and family resilience a bit more than the folks behind the Golden Globes. And it seems that this momentum has propelled the piece towards broader recognition in the ranks of Oscar nominees: like Nomadland, “Minari” also received six total nominations.

David Fincher’s “Mank,” a biographical drama examining the life and times of “Citizen Kane” co-writer Herman J. Mankiewicz, scored 12 nominations at the CCAs, including Best Picture, Director, Actor for Gary Oldman, and Supporting Actress for Amanda Seyfried. Some have noted that the film has underperformed thus far, receiving only one award at the CCAs and none at the Golden Globes. Nevertheless, it leads the pack in the Oscars race with a total of 10 nominations — though how many categories it will win is perhaps a separate question.

The stylish black comedy “Promising Young Woman” took home Best Original Screenplay and Best Actress for Carey Mulligan at the CCAs, and director Emerald Fennell was one of three women contenders in the Best Director category (all three women were also nominated for Golden Globes). And what’s more: Fennell has since been nominated for the Oscars’ Best Director race, meaning that for the first time in Oscars history, there will be two women competing in the category. Certainly watch out for “Promising Young Woman” at the Oscars in April, where it’s a five-category contender.

But perhaps the most important — and most simple — truth that the CCAs nominees and winners reveal is that representation in thoughtful storytelling matters and deserves to be recognized during awards season. Races for the Critics Choice film categories (even more so than those at the Golden Globes) recognized creatives telling thought-provoking social and political tales — historical and otherwise — that speak to our own times (and hopefully to Oscars voters).

“Ma Rainey’s Black Bottom” is a meditation on Black art and industry exploitation that should speak right to the studios it springs from: although it did not secure a Best Picture nomination at the Golden Globes, it did at the CCAs, and should certainly be a viable competitor at Oscars as well. The late Chadwick Boseman delivered a stunningly affecting performance as Ma Rainey’s disillusioned trumpeter, has now won both the Golden Globe and Critics Choice Awards for Best Actor, and is the clear frontrunner for the prize at the Oscars. Viola Davis’ performance as the film’s titular “Mother of the Blues” has earned her an Oscars nomination as well.

Several other films from Black filmmakers that received recognition at the CCAs tell a series of essential stories in temporal proximity: “One Night in Miami,” which follows a 1964 meeting of Malcom X, Muhammad Ali, Sam Cooke, and Jim Brown, collected several nominations at the CCA’s, including Best Director for Regina King in her directorial debut. “Da 5 Bloods,” a portrait of Black soldiers in Vietnam and the newest Spike Lee joint, breathed new life into the Vietnam War genre, but was snubbed by the Golden Globes and the Oscars alike, receiving only a Best Score nomination.

In addition, Shaka King’s “Judas and the Black Messiah” is a political biography that remains relevant to our contemporary moment and another Black-directed film that enjoyed visibility at the CCAs — though perhaps not enough. Some worry that the film’s revolutionary zeal and fearless portrayal of Black Panther Party Chairman Fred Hampton might turn off more conservative Oscars voters in the race for Best Picture at the Oscars, where it has earned a nomination (the film has picked up five Oscar nods total.) And although the film was absent from most major categories at the CCAs and the Golden Globes before it, Daniel Kaluuya’s stunning portrayal of Hampton sent the actor home with Best Supporting Actor at both shows. It’s certainly safe to say Kaluuya will be the clear frontrunner for the category at the Oscars.

This year’s CCAs may not have been the smoothest — but if its picks and selections provide any foresight at all to the Oscars, its recognition of filmmakers and actors of color provides some glimmer of hope for the future of inclusion in Hollywood.

— Staff writer Jamila R. O’Hara can be reached at jamilaohara@college.harvard.edu.