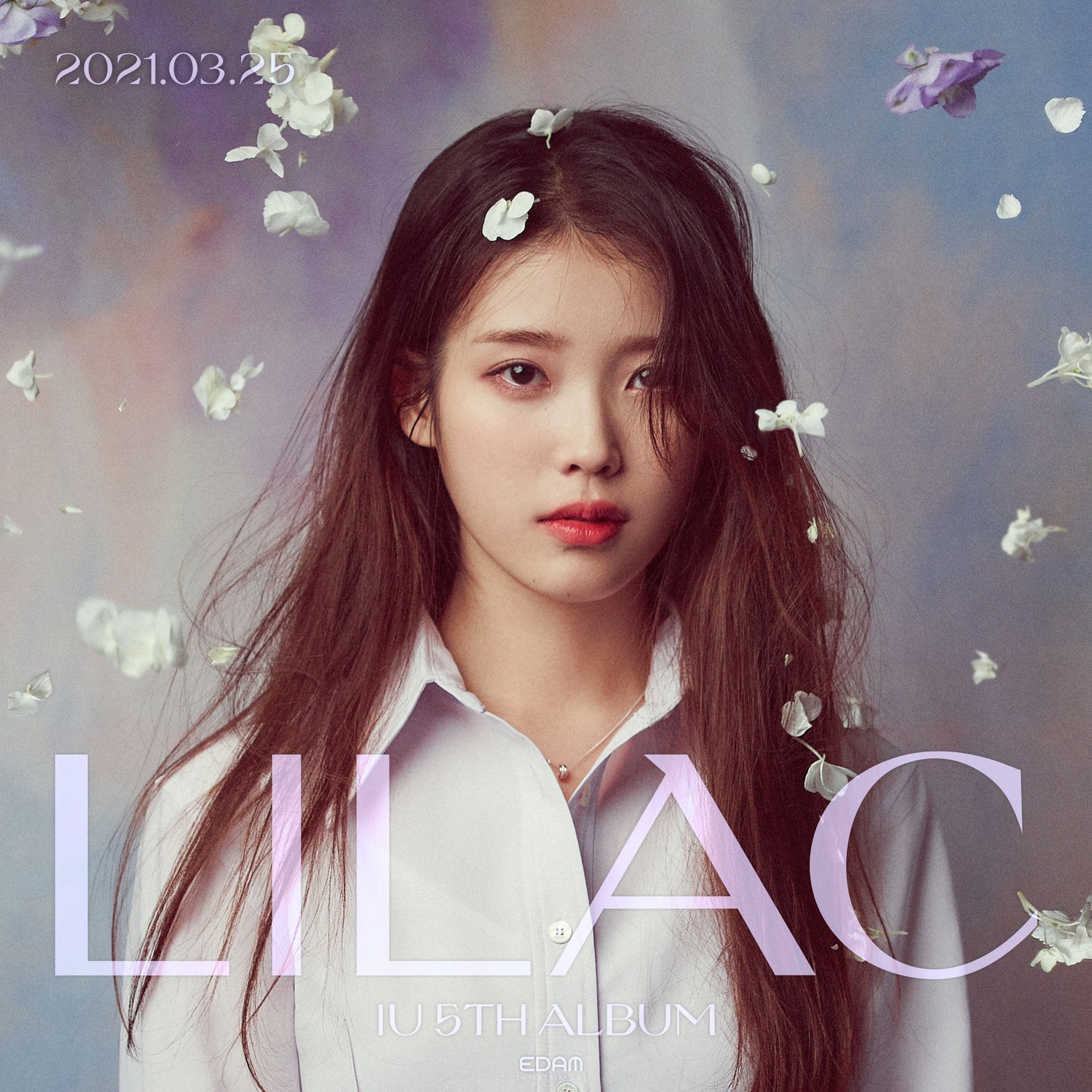 In her fifth studio album, “LILAC,” IU embraces the symbolism of lilac flowers as memories of youth to bid an emotional farewell to her 20s and say a hopeful hello to her 30s. At 29 years old, the Korean singer, songwriter, actress, and “Nation’s Little Sister” said that she crafted this album with love and gratitude for all the people who supported her during the musical projects of her 20s — from her single album “The Spring of Twenty” to, finally, “LILAC.” To commemorate this huge milestone in her life, IU challenged herself to work with new composers for each song, resulting in a masterful album of delightfully different genres, styles, and stories.

“LILAC” is well worth the four-year wait, as it speaks to the true breadth of IU’s musical ability. The album’s blend of sounds stems from the fact that IU created “LILAC” from the perspective of a producer, as opposed to that of a songwriter. As a surprising, yet welcome addition to her discography, IU worked with a variety of different producers — including WOOGIE, Sumin, Junny, and AMKU’s Lee Chan-hyuk — and swapped her usual light and airy style for an upbeat and retro-influenced one. The album creates a feeling of both weightlessness and playfulness and, while stylistically varied, stays true to IU’s typical sound.

With a perfect blend of rhythm, guitar, strings, and bright synth accents, the album’s disco- and city pop-inspired title track, “LILAC,” will surely evoke a sense of both nostalgia and optimism among listeners. Its groovy instrumentals and frolicsome chorus make the song feel almost like a spring breeze. City pop can often sound monotonous, but IU’s melodic vocals inject the track with energy and positivity. With lyrics such as “Take good care of our last moment in the page / Could this last goodbye be any more perfect?” and “Love me only ‘till this spring,” the singer bids farewell to the joyful memories of her youthful 20s that shine through the track’s pleasant and refreshing sound.

In another fun departure from her usual sound, “Coin” showcases IU’s newfound rapping skills and incorporates a brassy funk backbone, compounded with strong, fast-paced percussion and bass guitar, to capture the intensity of her 20s. The overall song is a metaphor for IU’s intense dedication to her craft when she sings, “I can’t die, I’m all-in.” Here she is comparing the adrenaline of high-stakes betting to that of working constantly on her music and projects. IU admitted that while she does not regret much from her 20s, she wants to focus on living more than working in her 30s in an effort to avoid burnout as a result of her relentless work ethic. Nonetheless, “Coin” is the perfect soundtrack for a high-intensity, adrenaline-pumping scene that has a lot at stake for the main characters.

An IU album is incomplete without a tear-inducing ballad, and “My sea” fully embraces that role for a whopping five minutes and 16 seconds: a choice composer Jehwi made to represent IU’s birthday, May 16th. Once again, IU demonstrates incredible vocal ability by not only sustaining a technically demanding F5 note but also vocally painting an emotional journey of finding oneself in the midst of chaos like in the endless sea.

However, the album has its shortcomings. The pre-release track, “Celebrity,” is unfortunately oversaturated with basic Western electro-pop synths and awkward dance breaks that distract from IU’s unique musicality. “Ah puh,” however, achieves what “Celebrity” failed to do; the playful track incorporates dainty rhythms with an addictive melody as an adult take on her old style, providing listeners with a delightful and fresh departure from IU’s typical sound.

In the aptly-named final track of the album, “Epilogue,” IU poetically sings, “Were you happy to know me? / Were you happy to love me?” which she immediately follows up with, “If you answer 'yes' to all of these questions / With that alone, my life will be okay / Oh, it’ll hold enough meaning.” IU pours her heart out to listeners on this reflective and lovely song paired with acoustic guitar, soft drums, and crackles from a record player. The track’s lyrics are arguably the best of this album, if not of IU’s songwriting career. She sings of wanting to have positively touched the life of someone she loves dearly, even in the smallest ways — “Do the long memories with me make you laugh even a bit? / Are you still proud that we were together at some point in life?” Ultimately, she perfectly captures feeling content in life after finding “your person” then being validated and recognized by them. IU is able to weave years of gratitude and love into this emotional homage for everyone, especially her fans known as Uaenas, who has been with her throughout her 20s. And for the record, the answer to all of IU’s questions is a resounding “yes.”

Nearly 13 years into her career, IU continues to amaze her fans, redefining what it means to be a K-pop singer, songwriter, and producer. Much like the dual meaning of the Korean word “insa,” which can mean both a farewell or greeting in Korean, “LILAC” captures the sentiments of her 20s and lays the foundation for the future of the artist’s career as she enters the next chapter of her life.