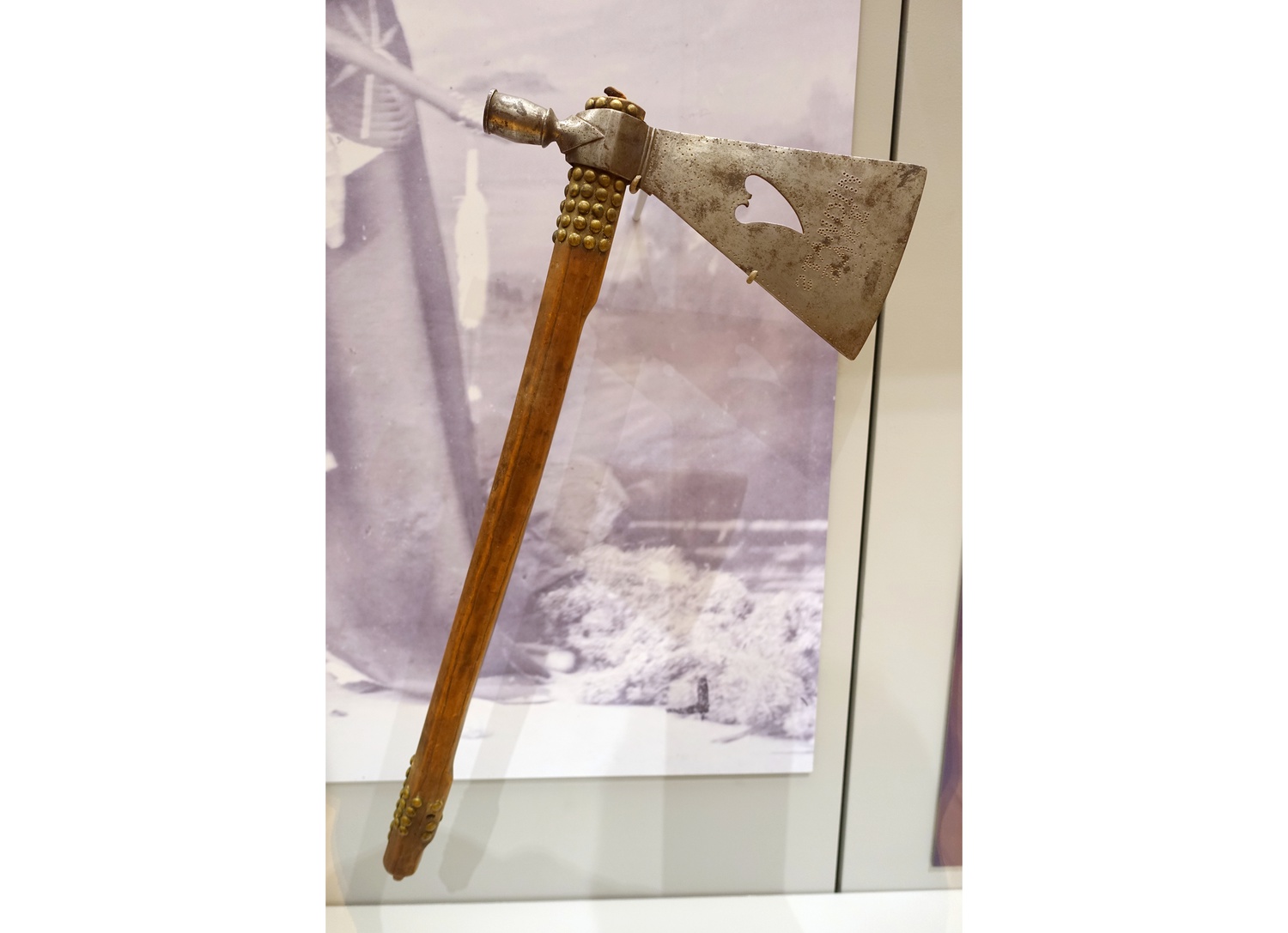 The Peabody Museum of Archaeology and Ethnology is in talks with Ponca tribal leaders and a descendant of Ponca chief Standing Bear to repatriate to the Ponca people a pipe tomahawk that once belonged to Standing Bear. By Courtesy of Daderot / Wikimedia Commons
By Oliver L. Riskin-Kutz, Crimson Staff Writer

The Peabody Museum of Archaeology and Ethnology is in talks with Ponca tribal leaders and a descendant of Ponca chief Standing Bear to repatriate to the Ponca people a pipe tomahawk that once belonged to Standing Bear, Museum Director Jane Pickering said in an interview on Thursday.

The move comes as the calls for the museum to return the tomahawk to the Ponca Tribes of Oklahoma and Nebraska have garnered media and legislative attention. Brett A. Chapman, an Oklahoma attorney and lineal descendant of Standing Bear, said he has been tweeting about the tomahawk for several years. He wrote to Pickering to officially request its return in April after receiving the support of Nebraska State Sen. Tom R. Brewer, a member of the Oglala Sioux tribe and the state’s first Native American state senator.

After initially not receiving a response for a week, he tweeted about the request, garnering international media attention. On May 7, a resolution sponsored by Brewer calling on Harvard to “fulfill its commitment to repatriation of Native American objects” — Chief Standing Bear’s tomahawk, in particular — was read on the floor of the Nebraska State Legislature, where it received bipartisan co-sponsorship.

Pickering said in the interview Thursday that the Peabody is “invested in the tomahawk going back to Oklahoma or Nebraska, back to the Ponca community.”

“Chief Standing Bear is obviously such an important figure in American history for all of us, but particularly for the Ponca community, that it just feels that it’s the right thing to do,” she said. Standing Bear was at the center of an 1879 landmark federal case in which Native Americans were for the first time ruled to be legally defined as people.

Larry D. Wright, the chairman of the Ponca Tribe of Nebraska, said in an interview that he looks forward to working with Harvard and the Peabody Museum on a “resolution that would return this to the Ponca people.”

“While we appreciate the museum's mission and efforts, those items we feel are best repatriated back to the Ponca for what they represent, who they belonged to originally, and what that history means to us,” Wright said.

Brewer said his office contacted Chapman after reading an article about Chapman’s attempts to have the tomahawk repatriated. Chapman is an enrolled member of Pawnee Nation of Oklahoma who has Ponca heritage and whose great-great-great-grandfather and Standing Bear shared a grandparent.

The tomahawk “would be something that would be treasured, whether it was allowed to be displayed by the Ponca tribe at the Nebraska State Historical Society or if it would be in the Ponca Museum,” Brewer said.

After receiving the call from Brewer’s office “out of the blue” offering the senator’s support, Chapman decided to draft the letter to Pickering.

In the letter, Chapman cited the museum’s recent apology for its curatorial actions around Native American cultural items and human remains.

“If museum administrators want to live up to their recent apology with actions, I submit that you can either voluntarily repatriate this relic or make a deal that results in Harvard admitting some Ponca students if the University desires to keep it,” Chapman wrote.

“This tomahawk belongs with the Ponca people,” he added.

In 1878, Standing Bear left the Ponca reservation in Oklahoma along with 29 others to bury his son in Nebraska, where he had been born. Standing Bear was arrested for leaving the reservation. In the subsequent landmark trial a federal judge ruled for the first time that Native Americans were legally defined as persons, with the right to sue for their own freedom.

The Peabody Museum of Archaeology and Ethnology. By Rohan W. Goel

“The whole reason the Ponca tribe of Nebraska is in Nebraska today is because of what Standing Bear and those that came back with him were willing to do,” he said. “They were willing to die to come back to Nebraska after we were wrongfully removed to Oklahoma, and we’re here today because of those efforts.”

“To have an item like that, that he owned, that still exists, and what it represents, historically, as we continue to be here today — from that context alone, that’s a huge thing,” he added.

After the trial, Standing Bear gave his tomahawk to John L. Webster, a lawyer who represented him pro bono in that case, as a gesture of gratitude, Chapman said. The Museum received the tomahawk in 1982, but can only directly trace its provenance as far back as a collection of Native American items sold by the widow of an Omaha lawyer in 1930; it is unclear how that lawyer came to possess it.

Chapman said his request for the return of Standing Bear’s tomahawk to the Ponca tribe is different from other repatriation claims that have arisen in recent months in that it is on “moral” grounds, rather than legal.

Since Standing Bear first willingly gave away his tomahawk as a gift, Chapman doesn’t contest the Museum’s legal right to its ownership, he said. His argument is that Standing Bear would never have given his tomahawk to Webster in the first place were it not for the injustice of his arrest, and, more broadly, the U.S. government’s mistreatment of the Ponca tribe and other Native Americans.

“The whole thing is completely illegitimate to me,” Chapman said. “If that injustice, which was illegitimate, didn't happen, he wouldn’t have needed to hire the white lawyer who gave the tomahawk away. It’s just a whole chain of events that’s all illegitimate.”

“We’re still here – the Poncas are still here,” he added. “Why shouldn't we have it? Harvard had absolutely no connection to any of this stuff. They’re just someone who ended up with it.”

Pickering said she agreed with Chapman that the Museum’s ownership of the tomahawk, while legal, is an “ethical issue.”

Pickering pointed to a recent policy shift that codified the Museum’s willingness to respond to requests for repatriation that go beyond its legal obligations. In response to a February letter from the Association on American Indian Affairs, the Museum agreed to return certain Native American funerary objects that it had not been obligated by law to repatriate under the Native American Graves Protection and Repatriation Act.

In the interview, Pickering also pointed to the Peabody’s long-term loan in 2016 of a Native Alutiiq kayak to the Alutiiq Museum in Alaska, on the terms requested by Alutiiq leaders, as an example of the Peabody’s willingness to collaborate with indigenous communities with regard to culturally significant items.

“It’s about partnership with the community, with the idea of trying to do the right thing,” she said.

Pickering said the first meeting with the Ponca tribal leaders and Chapman will be via Zoom, but that future discussions might take place at Harvard, in Nebraska, or in Oklahoma.

Chapman hasn’t yet been to the Peabody to see the tomahawk in person, he said.

“I plan to go up there and get it whenever they decide to give it back,” he added.