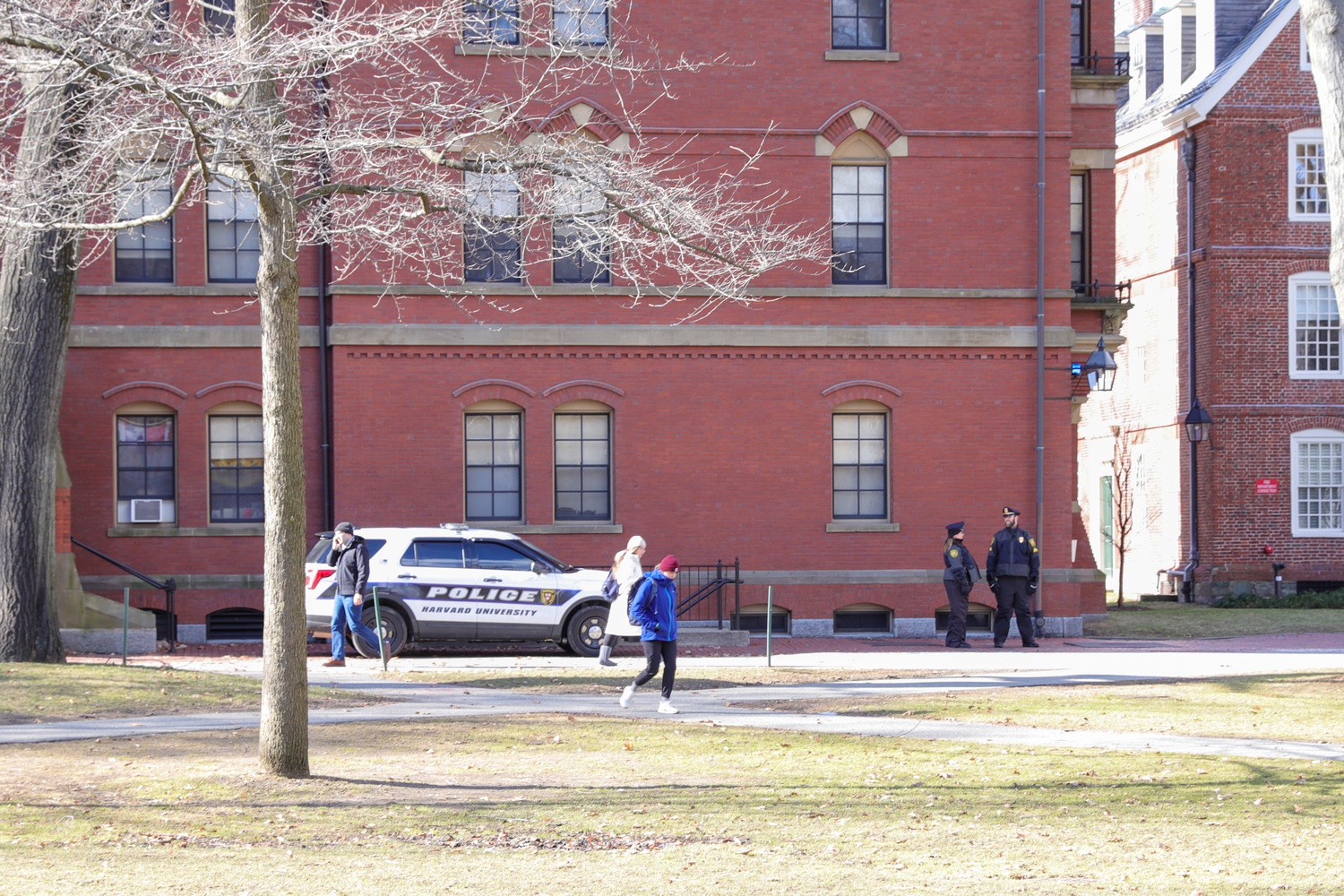 Two Harvard University Police Department officers were involved in a fight in the department's parking lot. Both were suspended, despite one officer's allegation that the other called him racial and homophobic epithets. By Ryan N. Gajarawala
By Raquel Coronell Uribe, Crimson Staff Writer

An arbitrator ruled earlier this month that Harvard excessively punished a Black University police officer when it doled out equal punishments for fighting to the officer and a colleague who allegedly called him racial and homophobic epithets.

The Harvard University Police Association union filed the grievance in 2019 on behalf of HUPD officer Josiah Christian after he was suspended for seven days without pay and issued a final warning as a result of an altercation roughly four years earlier.

During the dispute in the HUPD parking lot, then-officer Thomas F. Karns — now a sergeant — approached Christian’s vehicle and told Christian he had obstructed the path out of the garage, according to internal emails obtained by The Crimson in 2019. Christian alleged he was trying to move his vehicle out of the way to allow Karns to pass. Christian then exited his vehicle to confront Karns, at which point both officers started yelling at each other. Christian, who is Black, alleged that when he moved toward Karn, Karn said, “Fuck you f----t n----r.”

The incident only came to the attention of management in 2019. A subsequent investigation by HUPD Deputy Chief Michael Giacoppo found inconclusive evidence to conclude that Karns had called Christian the n-word, and both Karns and Christian were suspended for engaging in physical altercation, which violates HUPD and Massachusetts special state police officer policy.

However, in a June 1 opinion obtained by The Crimson, American Arbitration Association arbitrator Marc D. Greenbaum determined that Karns did, in fact, use the racial epithet when confronting Christian, and the department should not have held both officers “equally culpable” for the altercation.

“The arbitrator is not excusing [Christian’s] response or suggesting that he should be nominated for an award,” Greenbaum wrote. “From a just cause perspective, it is simply not possible to deem both officers equally culpable and subject to the same disciplinary sanction because the evidence compels finding that [Karns’s] initiation and escalation of the conflict led to the unfortunate result.”

Greenbaum wrote that “viewed myopically,” engaging in “workplace violence” would provide justification for imposing discipline. This case, however, was not “ordinary” given the racist and homophobic framing surrounding it.

“In both the background and foreground of this case are issues of racism, homophobia and concerns about the presence of those forces within police organizations like the University’s,” Greenbaum wrote.

Greenbaum wrote that police officers are often subjected to verbal provocation, and the University stood “on solid ground” in demanding its officers maintain composure in those circumstances. The arbitrator, however, wrote that the use of a racial epithet by Karns could have been a mitigating factor in punishment against Christian.

“The use of that epithet stuck at a core of [Christian’s] very being in a way that few of us can truly appreciate,” Greenbaum wrote. “One cannot, however, ignore the University’s concerns that workplace violence is never acceptable and particularly unacceptable from a trained police officer.”

Greenbaum also found aspects of then-HUPD chief Francis D. “Bud” Riley’s management of the situation “troubling.” According to Greenbaum, Riley testified in 2019 that Christian should have reported the issue promptly to a Black HUPD deputy chief, as it would have enabled the altercation to be handled internally, rather than outside of the department.

Greenbaum concluded that the University had just cause to discipline Christian, but its punishment was “too harsh” when compared with Karns’s punishment — which was equivalent to Christian’s.

“The suspension should be reduced to one day and the final warning should be excised from his record,” Greenbaum concluded. “The grievant shall be made whole for lost earnings, without interest, and his personnel records should be amended to reflect this Award.”