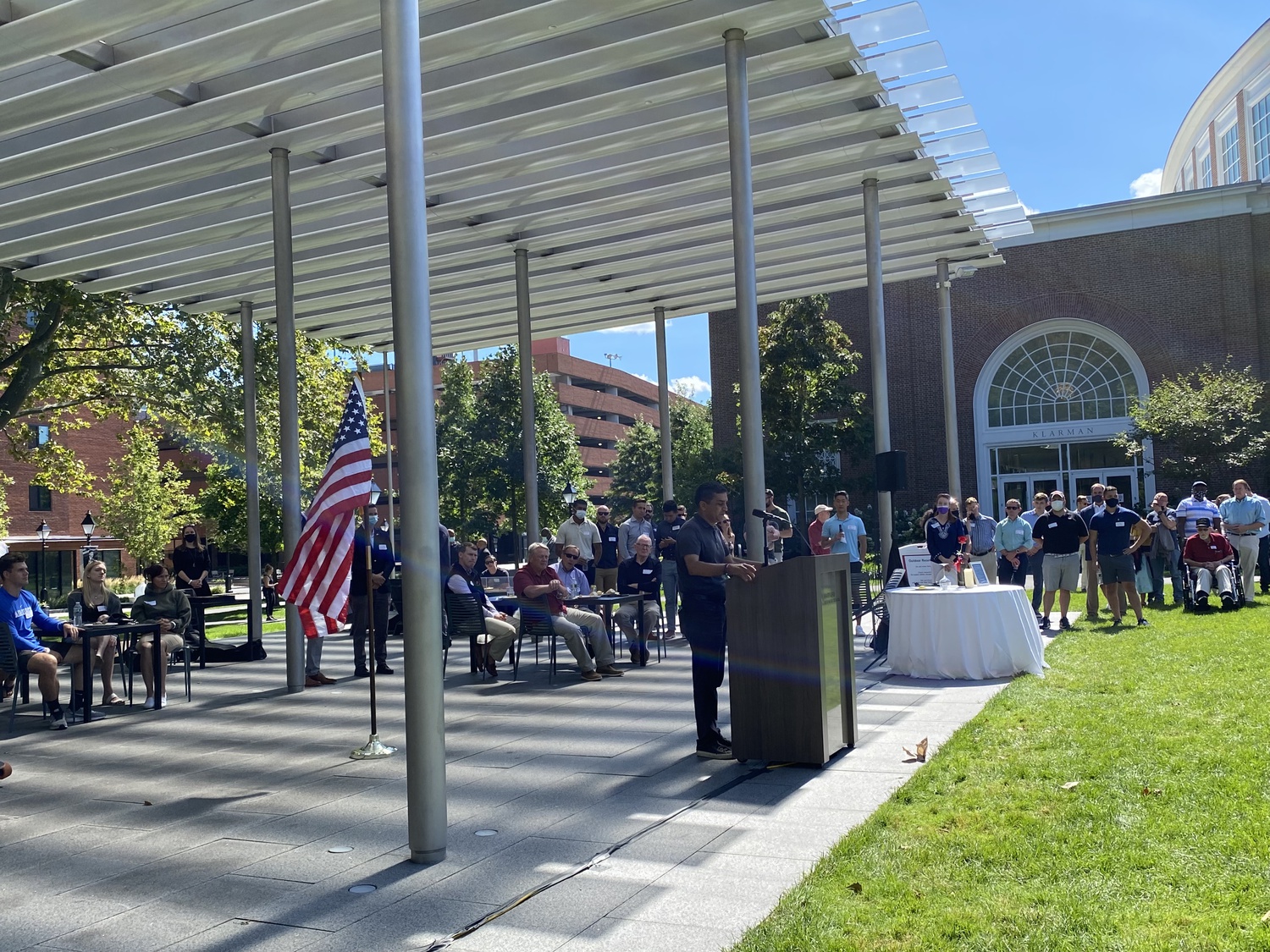 Dean of Harvard College Rakesh Khurana said on the 20th anniversary of 9/11 that the terrorist attacks spurred generations of Americans to lead lives of service. By Mayesha R. Soshi
By Mayesha R. Soshi, Crimson Staff Writer

Harvard affiliates with military backgrounds came together Saturday to honor the 20th anniversary of 9/11 at a barbeque hosted on the lawn of Harvard Business School that included remarks from University President Lawrence S. Bacow.

The event — which was co-hosted by the Harvard Veterans Alumni Organization and Bacow — featured speeches from Bacow, Harvard College Dean Rakesh Khurana, and Harvard Veterans Alumni Organization president Everett Spain. All speakers recounted their personal experiences of when the planes crashed into the towers and dedicated time to honor the people who died on that September day.

Spain led all attendees of the program in a moment of silence for the veterans and servicemembers who have died since 9/11.

In Bacow’s remarks, he traced the University’s military history — from the commandeering of the president’s mansion by George Washington on April 19, 1775 when shots were heard in Lexington and Concord, to the creation of Memorial Hall in honor of alumni who died in the Civil War.

“These spaces and many more around our campus I think are constant reminders of the connection between two of this nation’s most enduring institutions, and they give us glimpses of our past,” Bacow said.

Bacow remarked on the enduring impact of Sept. 11 on the national consciousness.

“Many of us remember exactly where we were at the moment that we got the news of the horrifying attack on our country,” Bacow said. “The impact of that day still reverberates. Today, we are still coming to understand what it meant and what the consequences are for all of us going forward.”

Though Khurana implored attendees to honor the victims of the terrorist attacks, he also recognized how 9/11 galvanized people to serve in numerous ways.

“What happened on that day, also spurred a commitment to public service for many, whether that is in the military, government, or community activism. For some, events drove a passion for saving lives, for medicine, or research,” Khurana said. “And for others, experiencing that day led to the pursuit of protecting the innocent, for advancing peace, and understanding in our world.”

Abia S. Khan ’24, a member of the Reserve Officers’ Training Corps who attended the event, said she believes 9/11 impacts her day-to-day life and informs the way people perceive her and other Muslim-Americans.

Eric H. Deng, a student at the Business School, said the 20th anniversary of 9/11 provides an opportunity to recognize people who continue to serve their country.

“I think it’s definitely a period of reflection. I think one of the good things about this event is that it’s bringing together this community, where we can kind of come together and reflect and kind of recognize the events from 20 years ago, recognize the sacrifices that some of our community members have made,” Dent said. “It is a continuous line of service.”