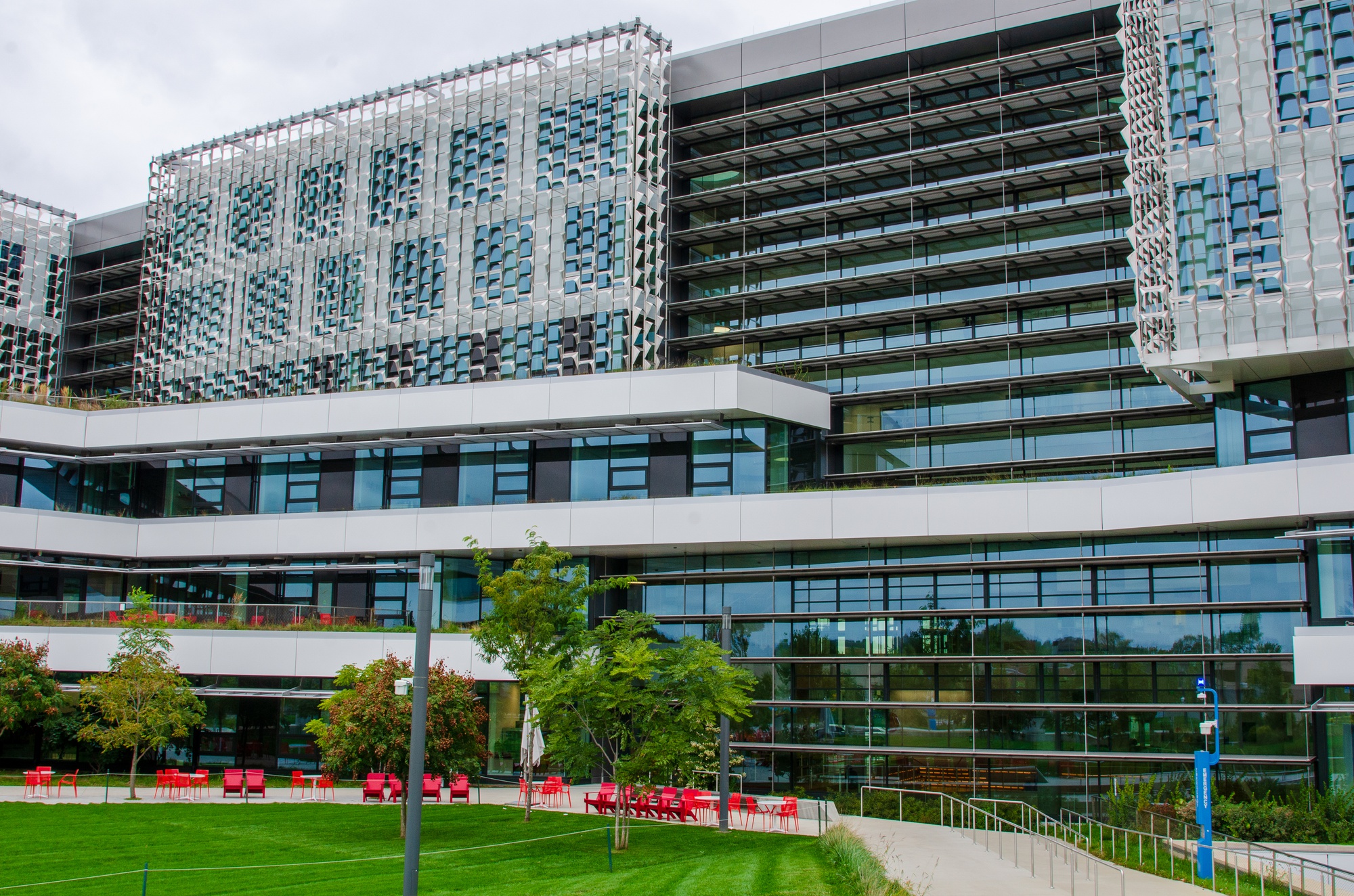 The Science and Engineering Complex, located at 150 Western Avenue in Allston, houses the administration of the School of Engineering and Applied Sciences. By Joey Huang

More than 56 percent of SEAS graduates in 2022 reported that they planned to go to the for-profit world. But for those hoping to go into engineering jobs in public service, making up only 3 percent of SEAS undergraduates in the class of 2022, the path to employment is far less clear cut.
By Felicia He and James R. Jolin

When Grace R. Kim ’23 met with a recruiter from Elon Musk’s for-profit company SpaceX during her junior spring, they offered her a job “on the spot.”

Kim was meeting with the company representative to discuss a potential collaboration between the spacecraft engineering firm and the student group Harvard Students for the Engineering and Development of Space. But she left the discussion with a summer job in hand.

For undergraduate students at Harvard’s School of Engineering and Applied Sciences, there exists a well-worn pipeline to opportunities in the corporate world.

Engineers, especially those like Kim with a Harvard degree, are widely in demand for an array of high-paying industry jobs, including at tech companies, biotech corporations, and financial firms. In 2022, more than 56 percent of SEAS graduates reported that they planned to go to the for-profit world.

But for those hoping to go into engineering jobs in public service — making up only 3 percent of SEAS undergraduates in the class of 2022 — the path is far less clear cut.

Noting the difficulty of discovering and pursuing nonprofit career opportunities, some undergraduates hope for additional support in forging the way to public service work and boosting engagement among the broader student body.

“I think the biggest challenge for potential nonprofit work at the beginning is becoming aware of those opportunities, both within the States and globally,” said Layla J. Seaver ’24, co-president of Harvard’s chapter of Engineers Without Borders.

The appeal of industry jobs is evident: they often come with lucrative starting salaries, attractive exit opportunities, and, often, the prestige of a big-name firm.

“You certainly can have a job that pays the bills in your discipline and working in nonprofits, but we shouldn’t kid ourselves to say you’re going to make the same salary that you might if you were with Google or Facebook,” said Chris Lombardo, the associate director of undergraduate studies in electrical engineering and mechanical engineering at SEAS. “That’s an unrealistic expectation.”

Pathways to corporate work are easy to find at Harvard, said Giovan N. McKnight ’24, who serves as HSBSE vice president.

“I feel like that’s always being thrown at me, even over email lists,” he said. “I’m constantly getting emails about it.”

A range of undergraduate student groups based at SEAS offer opportunities for students to build professional portfolios in engineering and technology, helping direct them into summer and post-graduate employment.

The Harvard College Engineering Society, which describes itself on its website as “the umbrella student organization for Harvard engineers,” published a 49-page guide to engineering concentrations in 2020, offering step-by-step guidance for wooing corporate recruiters.

“Engineers make good money. Engineers have an easier time finding jobs. Engineering is a respected profession,” the guide states as reasons to pursue a career in the field.

Other student groups, like Women in Computer Science and the Harvard Society for Black Scientists and Engineers, aim to boost SEAS students from historically underrepresented backgrounds by hosting panels and recruiting events with industry partners, such as Vatic Investments, Bloomberg, and Brex Inc.

SEAS student Connor J. Schoen ’20, who co-founded the nonprofit Breaktime in his first year at the College, said he believes “going into industry has a more linear and clear path to it” than philanthropic or entrepreneurial work.

“You’ve got to go through this interview process, this is how you prepare, these are the employers,” he said. “It’s sort of something that there’s already more of an established guide to how to do it.”

For undergraduates not drawn by the appeal of corporate posts and salaries, public service careers offer an alternative way to make use of a SEAS education.

As with corporate job hunts, student organizations often serve as a starting point for landing public service employment, according to some students.

Yasmine Omri ’24, the organization’s co-president, said she was drawn to nonprofit engineering work by the opportunity to “build things that change lives.”

“We don’t do work for the communities — we really try to listen to their needs,” she said. “And another big emphasis is to make sure that all the materials are sourced locally and that the skills are also developed locally.”

“You also get to learn a lot about other cultures,” she added. “You really widen your perspective.”

Omri said EWB receives “a lot” of funding and advising support from SEAS, and Seaver, the other co-president, also said it benefits from being “so well funded” by the school and “well respected” among faculty with a strong support system.

Students are also able to connect with public service initiatives outside of SEAS, such as the Phillips Brooks House Association, the Mindich Service Fellowship, and the Harvard Kennedy School Social Innovation Fellowship.

“A lot of what I was doing required a lot of support from other parts of the university — for example, the Cheng Social Innovation Fellowship at Harvard Kennedy School, which was absolutely life-changing for me,” he added.

SEAS itself is “receptive and open” to non-industry engineering, according to Alexander G. Dyer ’24, who co-led an EWB project in Kenya with fellow SEAS classmate McKnight.

Suvai Gunasekaran ’13, who was involved with EWB for her entire time as an undergraduate, credits her exposure to public service work through the organization with giving her the “hands-on” nonprofit engineering experience to launch her career.

She later became vice president of engineering for a fellow EWB member’s water nonprofit, SPOUTS of Water, where she designed ceramic water filters for a factory in Uganda.

‘Harder to come by’

But even with these curricular and extracurricular offerings, students interested in public service are often left to “pioneer their own paths,” said Lombardo, the associate DUS.

Outside of public service clubs, “individual opportunities are harder to come by,” according to Seaver.

Omri described the low number of students in nonprofit engineering as a “cycle” perpetuated by a lack of early awareness.

“We don’t have that many opportunities for public service, so people don’t hear about them early on, and then after that, they’re really focused on this industry side,” she said.

Seaver suggested that the school could better advertise public sector opportunities, adding that such a move could help entice students who have never before considered nonprofit work.

Dyer, an EWB participant, pointed out the difference between providing exposure to nonprofit employment and actively encouraging students to pursue that path, saying the school could do more to champion opportunities for public service work.

“I think commitment implies a level of forwarding, a kind of pushing,” he said. “I don’t really know how much there is.”

Other students and alumni expressed similar desires for additional school and faculty support.

“I’d say, one of the biggest problems is that usually these projects are driven by a few really passionate individuals, and when they leave, these projects kind of die off,” he said. “For new ones to be brought forth, it requires a lot of startup effort by students.”

Similarly, Gunasekaran said that, at Harvard, the EWB chapter “had enough to survive and do well, but it definitely wasn’t a big focus of people in the engineering field.”

“There was never any pushback, but there was also never any encouragement for it,” Gunasekaran said. “I was just doing my own thing without any faculty involvement.”

In an emailed statement, SEAS spokesperson Paul Karoff wrote that the school seeks to provide an array of public service opportunities to students.

“Through curricular and co-curricular offerings, SEAS is committed to providing students with opportunities to explore internship and career options across the many sectors in which the skills of engineers and applied scientists are in high demand — industry, academia, nonprofits/NGOs, and government,” he wrote.

Lombardo suggested Harvard could potentially allocate additional resources to nonprofit endeavors that would benefit engineering students who want to do public service work.

“That could be a strong benefit for those students who have interests in combining STEM with a social justice or nonprofit purpose,” he said.

Further support for nonprofit opportunities could be achieved by encouraging collaboration among administrators and faculty across the University, he added.

“I think any sufficiently important, tangible, hard problem is never going to be solved by a single discipline or group,” Lombardo said. “We’ve got the top researchers, we have access to the top practitioners on this campus and in our networks. Why can’t we bring that together to make a significant impact?”