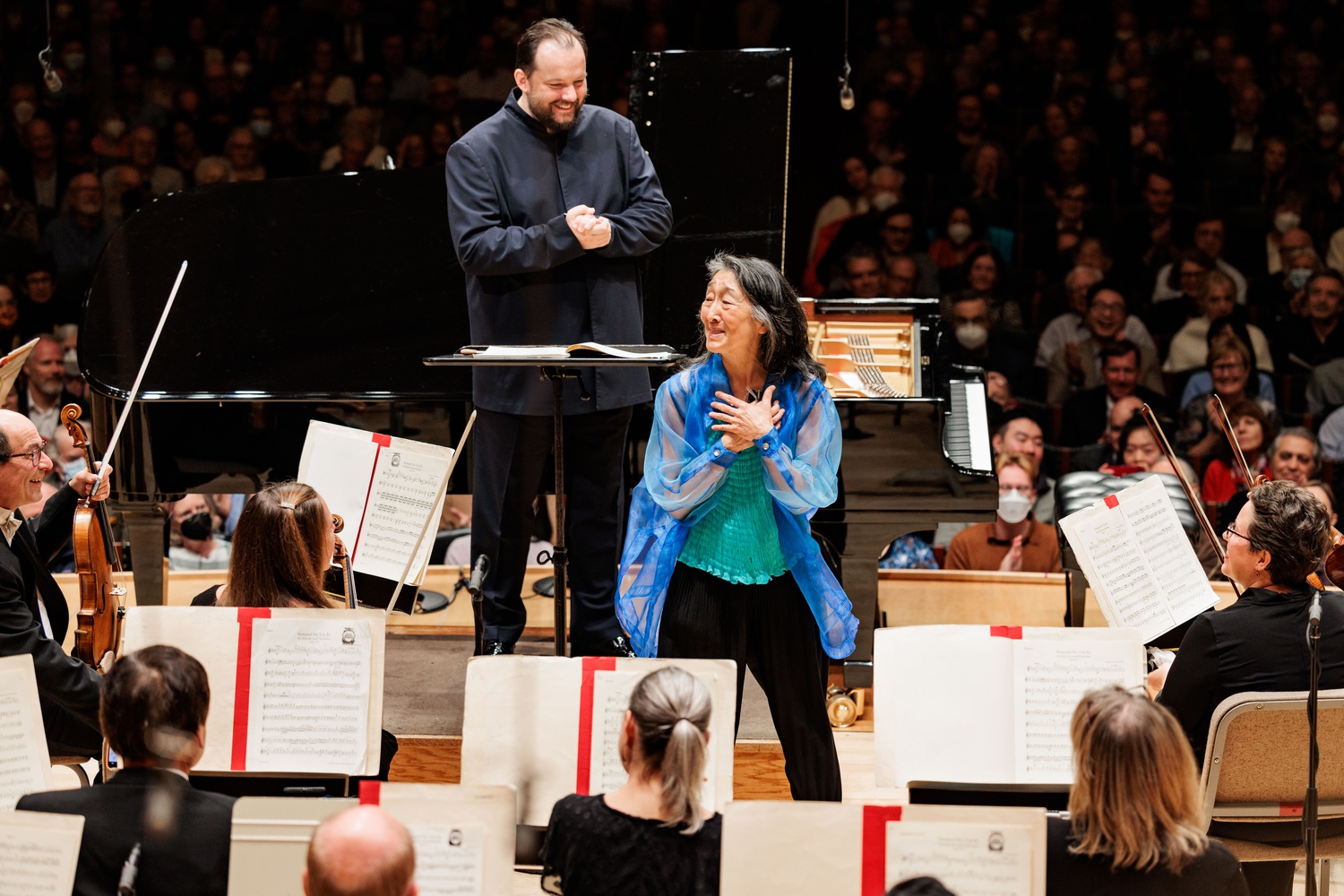 Pianist Mitsuko Uchida receives an ovation while Andris Nelsons and the Boston Symphony Orchestra look on. By Courtesy of Aram Boghosian
By Daniel Wang, Contributing Writer

The legendary Mitsuko Uchida — a two-time Grammy Award winning pianist and co-director of the prestigious Marlboro Music Festival — stepped into the limelight at Boston Symphony Orchestra’s Oct. 29 performance of Beethoven and Shostakovich with hesitance. Although met with rapturous cheers, her countenance betrayed just the faintest hint of discomfort, almost as if something bothersome was lurking beneath the torrent of applause.

Yet, there are some similarities between the two landmark works. Beethoven began drafting his Fifth Piano Concerto while Vienna was under siege. Routine bombardments deeply affected the German-born composer. He wrote, “What a disturbing, wild life around me; nothing but drums, cannons, men, misery of all sorts." Shostakovich suffered from similar angst. Following the party’s condemnation of his opera Lady Macbeth of Mtsensk, the Soviet composer — certain of his imminent arrest — began sleeping in the stairwell outside of his apartment. Both works are thus musical expressions born out of the very crucible of emotional turmoil.

The challenge in performing these two pieces thus lies in the balance between conveying the compositions’ intended effect and capturing each piece’s musical details. Saturday’s performance was a valiant effort, but not without a few stumbles. Uchida’s performance of Beethoven’s Fifth Piano Concerto “Emperor” with the Boston Symphony Orchestra (BSO) did not match the work’s liveliness and sparkle. Despite this, Uchida’s characteristic interpretive sensitivity exposed a dynamic range of colors and textures. Her command of the instrument thus revealed the work’s stylistic breadth with artistry. Nelsons’s conducting of the program’s second piece, Shostakovich’s famed Fifth Symphony, suffered from the opposite setback. In conveying the symphonic work’s emotional turmoil, the ensemble glossed over compositional details.

Under Uchida’s hands, the first movement of Beethoven’s “Emperor” Concerto — a flamboyant Allegro — was notably lacking in exuberance. Moreover, in more than one passage, technical imperfections interrupted the musical fiber, disrupting phrases otherwise shaped with finesse. Yet, Uchida’s execution of the sforzandos, fortissimos, and pianissimos peppered throughout the movement was spine-chilling.

Uchida’s performance of the concerto’s second movement (“Adagio un poco mosso”) was nothing short of masterful. Each note rang with expressive intent before effortlessly melting into the next. From these heavenly threads, Uchida stitched together passages of breathtaking nuance, clarity, and lyricism. Phrases, delineated by natural lines that pulsated with the texture of the music, floated comfortably at the threshold between overstatement and imprecision.

Nelsons and the BSO then approached Shostakovich’s somber Fifth Symphony. The orchestra’s performance of the opening movement — a haunting Moderato — was expressive yet underdeveloped. In the ghostly introductory theme, the string section was incohesive. Throughout the movement, dynamics suffered from a lack of clarity. Softer passages felt barely demarcated, almost as if the orchestra was already rushing to more robust dynamics. Yet, moments of musical inspiration abounded. A buoyant percussion section propelled the soaring trumpet and trombone chorale to stunning heights. The movement’s ending — tense, quiet, and subtly phrased — was gripping, almost phantasmagoric.

The second movement — a playful, almost sarcastic, Allegretto — lacked the composer’s trademark musical liveliness and suffered from interpretive ambiguity. The woodwinds failed to render the almost sardonic quality of the movement’s principle theme. Although Alexander Velinzon’s performance of the movement’s violin solo was richly textured and exquisitely shaped, the oboe, horn, and flute’s responses could have done more to match the concertmaster’s dynamic phrasing.

The orchestra’s rendition of the solemn Largo, the symphony’s third movement, was spellbinding. The strings conveyed the composition’s heavenly introduction with unreal precision and artful expressivity. Piano passages were rendered with an almost undetectable softness that rang with ghost-like clarity throughout the hall. Each note reverberated with musical impulse, conveying a religiosity, reservedness, and natural lyricism fitting for such a requiem-esque arrangement.

The fourth movement — a racy Allegro non troppo — was not nearly as convincing. The movement’s introduction, marked by a dramatic accelerando, was distastefully rendered. Nelsons urged the orchestra to an extreme tempo at the expense of orchestral unity and any semblance of cohesive phrasing. The final brass chorale, though voluminous and bolstered by a vigorous string section, ultimately lacked sustained phrasing and musical direction. It seemed as if style finally triumphed over substance in the last moments of the program — a fitting conclusion for a sincere but labored performance.