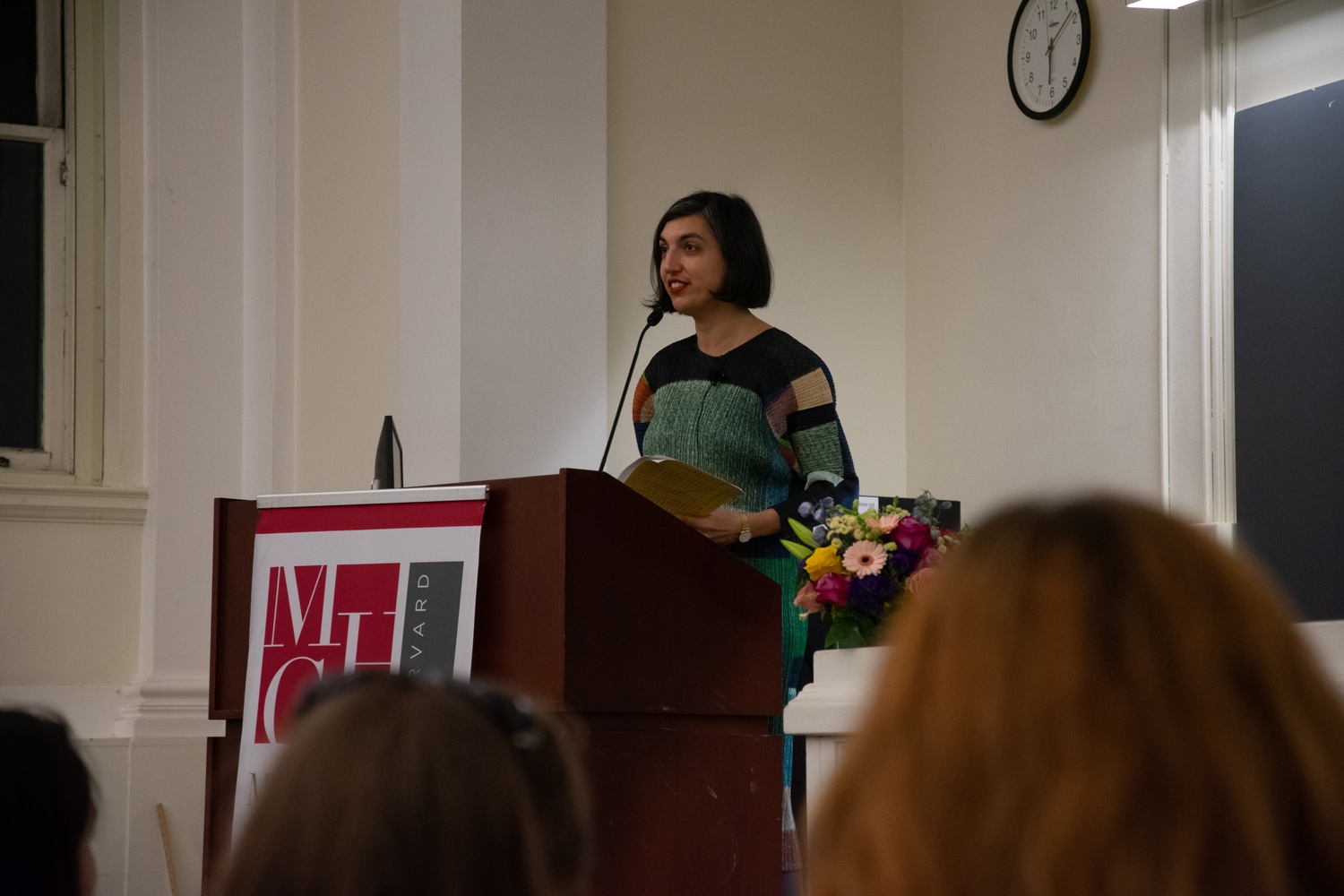 The author Elif Batuman ’99, whose book "The Idiot" was a finalist for the 2018 Pulitzer Prize for Fiction, spoke at Emerson Hall on Thursday. By Julian J. Giordano
By Vivi E. Lu, Crimson Staff Writer

During the event, which marked the first in-person session of the series “Writers Speak,” the pair spoke about Batuman’s outlook on writing and her Pulitzer Prize-finalist novel “The Idiot,” which she based on her experience as a freshman at Harvard.

Batuman kicked off the conversation by reading an excerpt from the first chapter of her latest novel “Either/Or,” a sequel to “The Idiot” published in May, before discussing her writing process with Blum.

As a young author, Batuman said creative writing meant “inventing characters” and “imaginatively projecting outside of yourself” — an idea she found counterintuitive.

“We experience everything from our own point of view, so to me, it makes a lot of sense to write from that perspective,” Batuman said. “I’ve been really happy about the auto-fiction trend, even though I agree it’s sort of an annoying word.”

When asked about the rarity of “protagonists who are fundamentally good students,” Batuman said she often wondered why she was a “compliant subject” as an undergraduate. Like Batuman, the novels’ protagonist Selin Karadağ is the daughter of Turkish immigrants and an aspiring writer.

“Now there’s so much incredible writing by immigrants and by the children of immigrants, but when I was growing up, there wasn’t that much that I was aware of,” Batuman said. “Compliance, especially for girls and for people who come from another culture, and the burden to succeed is part of what makes your life feel high stakes.”

The pair also discussed Batuman’s current role as an adjunct associate professor in the English department at Barnard College and her pedagogical approach.

“I teach undergraduates, and I am increasingly struck by the extent to which the pedagogical norms that I learned and internalized — whether explicitly or implicitly — were based on frustrating the student,” Batuman said. “I don’t think you can actually iron out all the frustration and friction from the educational process, but you can put yourself there with the person instead of creating some kind of hierarchy.”

Reflecting on her writing process, Batuman said she views writing as a challenge of determining what will excite the audience.

“I think of it as a puzzle where I can find a way to explain that to someone else where that’s going to be interesting to them, too,” Batuman said. “How do you turn it into a journey that this person is going to be excited to come on with you?”