‘Wonderful to be Back’: Alumni Return to Harvard Stadium for The Game 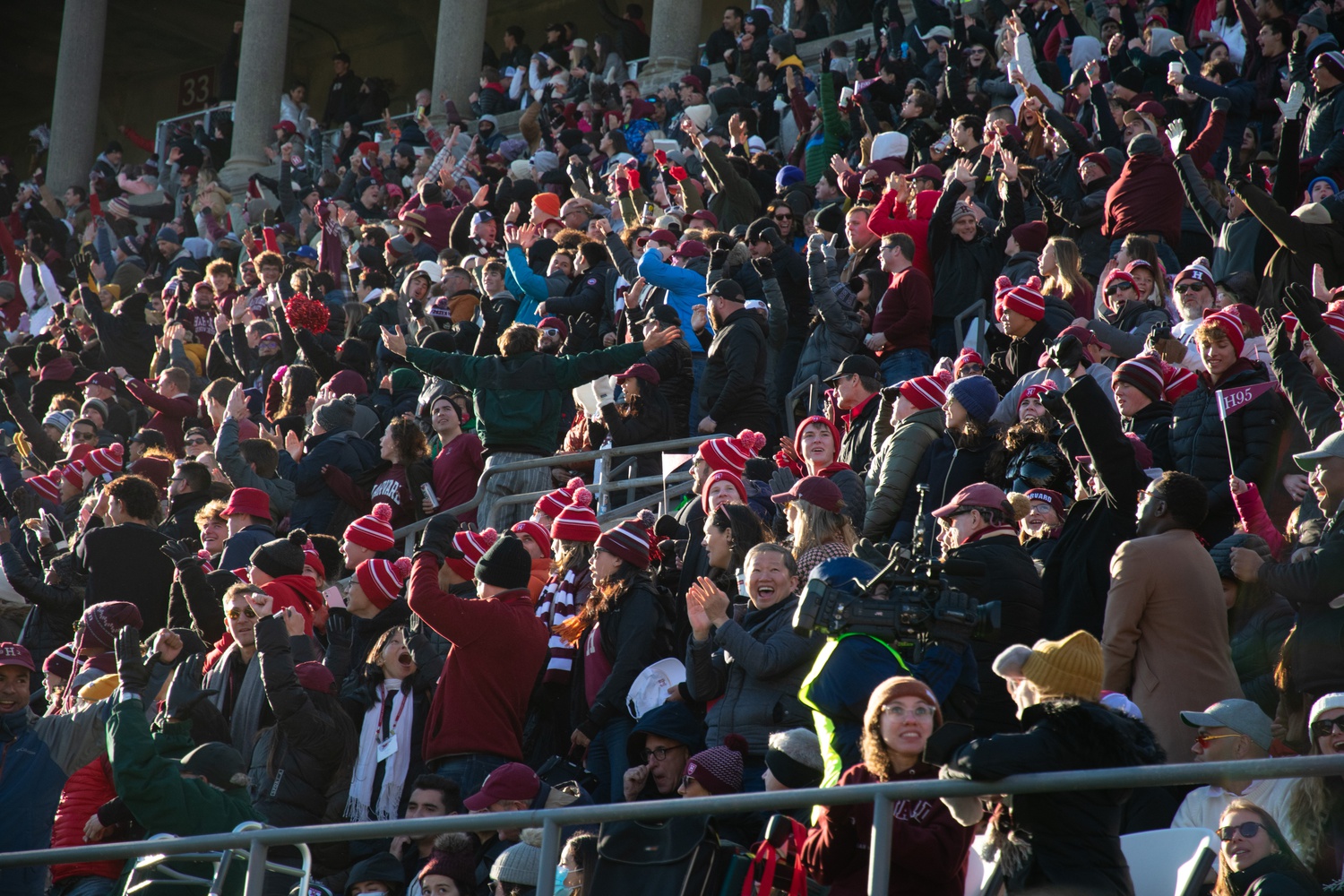 Harvard alumni filled the stadium on Harvard-Yale gameday. The Classes of 1995 and 1996 experienced their delayed 25th Reunions this weekend. By Julian J. Giordano
By Miles J. Herszenhorn and Claire Yuan, Crimson Staff Writers

Hundreds of Harvard alumni flocked to campus to watch the Crimson take on its rival — the Yale Bulldogs — on Saturday.

While some alumni flew in from as far away as Florida, others drove less than 15 minutes to watch the 138th rendition of The Game. Regardless of how they traveled to Harvard Stadium, alumni arrived excited to relive old memories.

Darren J. “DJ” Langis ’90, whose daughter is a sophomore at the College, said it has been “wonderful to be back.”

“The University and the alumni community has been tremendous in terms of welcoming all the alumni back to the game,” he said. “It’s been great catching up with fellow graduates and teammates. I think that the atmosphere has been electric all day.”

After winning The Game in 2021 with a last-minute comeback, Harvard suffered a 19-14 loss to Yale on Saturday. Despite the defeat, alumni said they enjoyed their weekend back on campus.

Jeffrey S. “Jeff” Bartel ’88, who attended the Harvard-Yale matchup with his family, wrote in an email after Harvard’s loss that “​​the experience of The Game is more important than the game outcome itself.”

“The history of the matchup, the sense of camaraderie among and even between the schools, and the belonging one feels to come back to Harvard’s campus are palpable,” Bartel added. “It’s really a special event in my life and the lives of tens of thousands of others who attended or attend Harvard.”

Harvard has not hosted The Game since 2018, when the rival schools dueled at Fenway Park. The two schools last clashed at Harvard Stadium in 2016.

Stuart M. Johnson ’18 — who was a defensive tackle for the Crimson — said Harvard-Yale weekend is “truly unlike any other college environment that I’ve ever been to.”

Between attending the tailgates and seat-hopping in the stadium, Johnson, a student at Fordham Law in New York City, ran into several friendly faces that reminded him of his time at the College.

“You see familiar faces and it feels weird a little bit because I’m like, ‘Wow, I've been away from school for a very long time,’” he said.

“Being back here is just amazing,” he added. “It’s a little surreal.”

Karen D. “Kiki” Snyder ’92 choked up remembering the photo she and her dad, an alum, took at the stadium during her junior year in 1990.

With limited tickets available for entry into The Game, Paul E. Mawn ’63 found his way into the stadium by returning to his post as a trumpet player for the Harvard Band.

Strolling through the stadium concourse dressed in a Crimson band blazer with instrument in hand, Mawn reminisced on previous games he has witnessed at Harvard Stadium.

“I was at the ’[68] 29-29 game,” he said. “It’s the most famous Harvard football game ever played where they played three touchdowns in the last two minutes or so.

“It was mind boggling,” Mawn added.