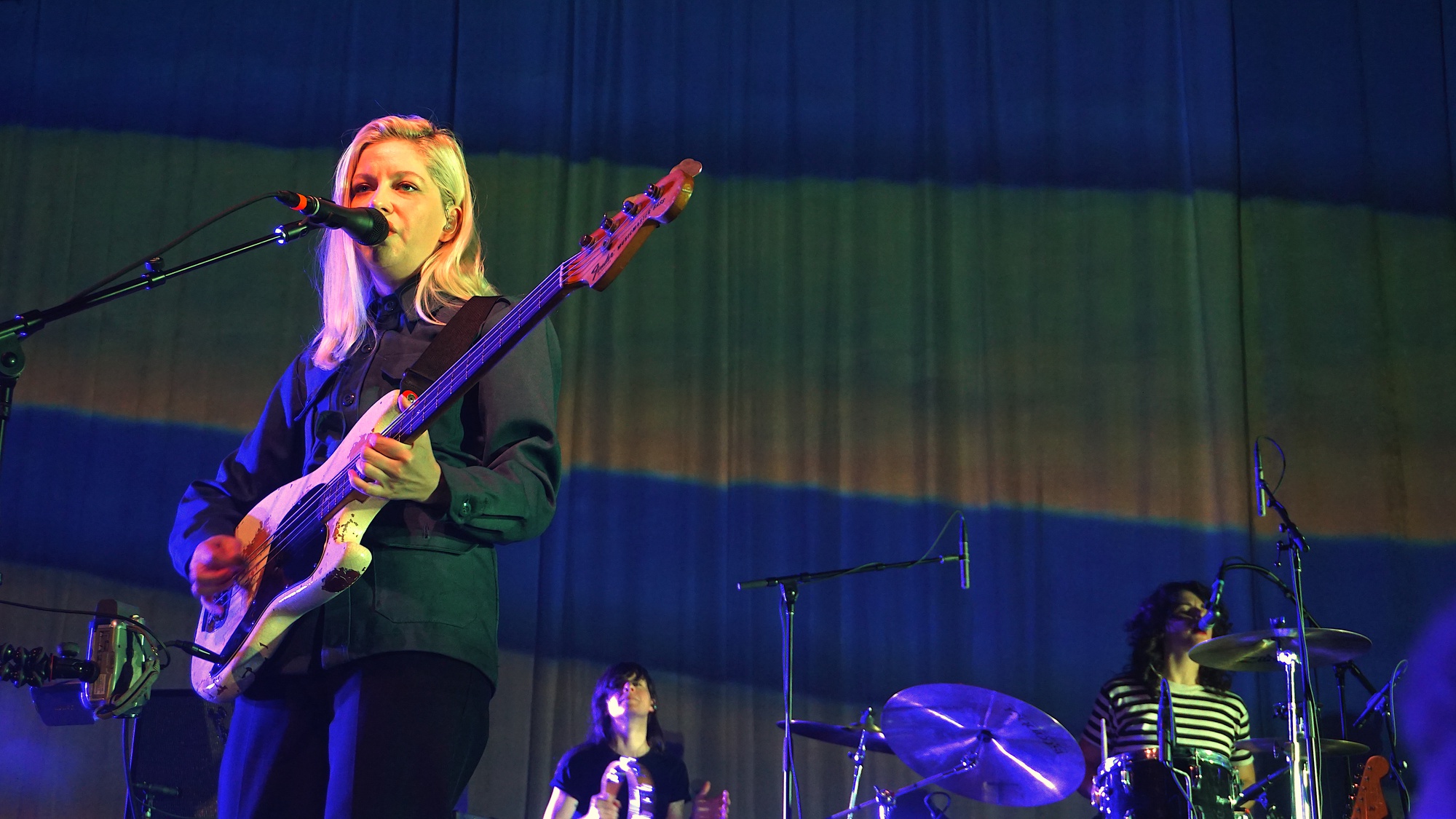 Molly Rankin is a lead singer of Alvvays, an indie rock pop band based in Toronto. By Courtesy of Asher Montgomery

Alvvays's Nov. 18 show at Boston’s Roadrunner was a flawless — and slightly strange — finale to their U.S. tour.
By Asher J. Montgomery

Back on tour after a five-year hiatus, Alvvays (pronounced always), an indie rock pop band based in Toronto, has proven their ability to make instant alt-rock essentials with the release of their third album, “Blue Rev.” Their Nov. 18 show at Boston’s Roadrunner was a flawless — and slightly strange — finale to their U.S. tour.

In one odd moment of the night, lead singer Molly Rankin put her guitar down as the song “Very Online Guy” started. Rankin squatted down, front and center on the stage, and continued to sing the song from that angle. She tucked her silvery blonde hair behind her ears when she looked up, then put her head down and sang directly to the ground. Somehow, her voice projected powerfully around the venue, her stage presence unaffected by the physicality of the moment.

The rest of the songs were played more conventionally. Each piece of the performance came across as well rehearsed and was well integrated. The songs flowed through with thoughtful progression. In both “Adult Diversion” and “Not My Baby,” a riff started off the song before it became recognizable. The band’s timing was impeccable; they always knew exactly when to join in. The songs stuck very closely to the recorded versions, as did the vibe of the band. They dressed like someone’s hipster parents, and mostly in primary colors, matching with all three of their albums covers.

This thoughtful design and practiced accuracy gave them the space for their energy. 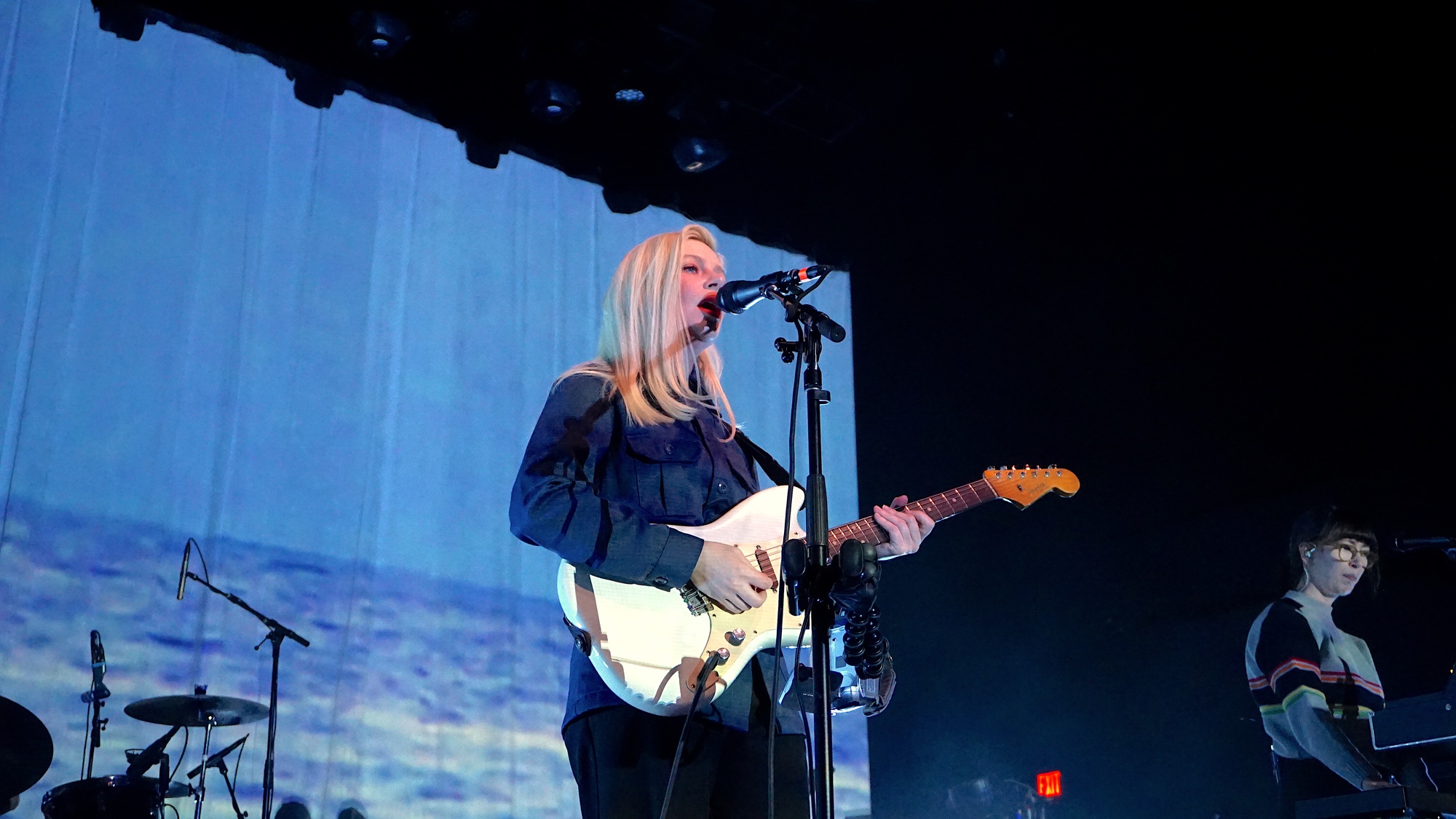 By Courtesy of Asher Montgomery

The drummer, Sheridan Riley, honed in on this. Dancing along with the crowd to every song, her thick curly hair swung around her face. She counted off every song with excitement. In contrast, Rankin, keyboardist Kerri MacLellan and bassist Abbey Blackwell stayed mostly stoic, letting out a small smile every now and then. Occasionally Rakin bounced a little, or took a step back from the mic, absorbed by the sound of her guitar. The lead guitarist, Alec O’Hanley, didn’t draw much attention to himself. He wore a plain yellow t-shirt and riffed the repetitive patterns that make each of their songs distinct. During “Archie, Marry Me,” O’Hanley took a moment for the iconic solo separating the chorus from the bridge. His solo brought the rock to the pop in this upbeat, rhythmic song.

But the best moments of the show were when the five members put their voices together in different combinations. Their cumulative effort was subtle, but noticeable. MacLellan, Riley and Blackwell harmonized with Rankin, sounding sometimes like an alien echo. Other times, they sang different words and gave the music a spacey feeling. 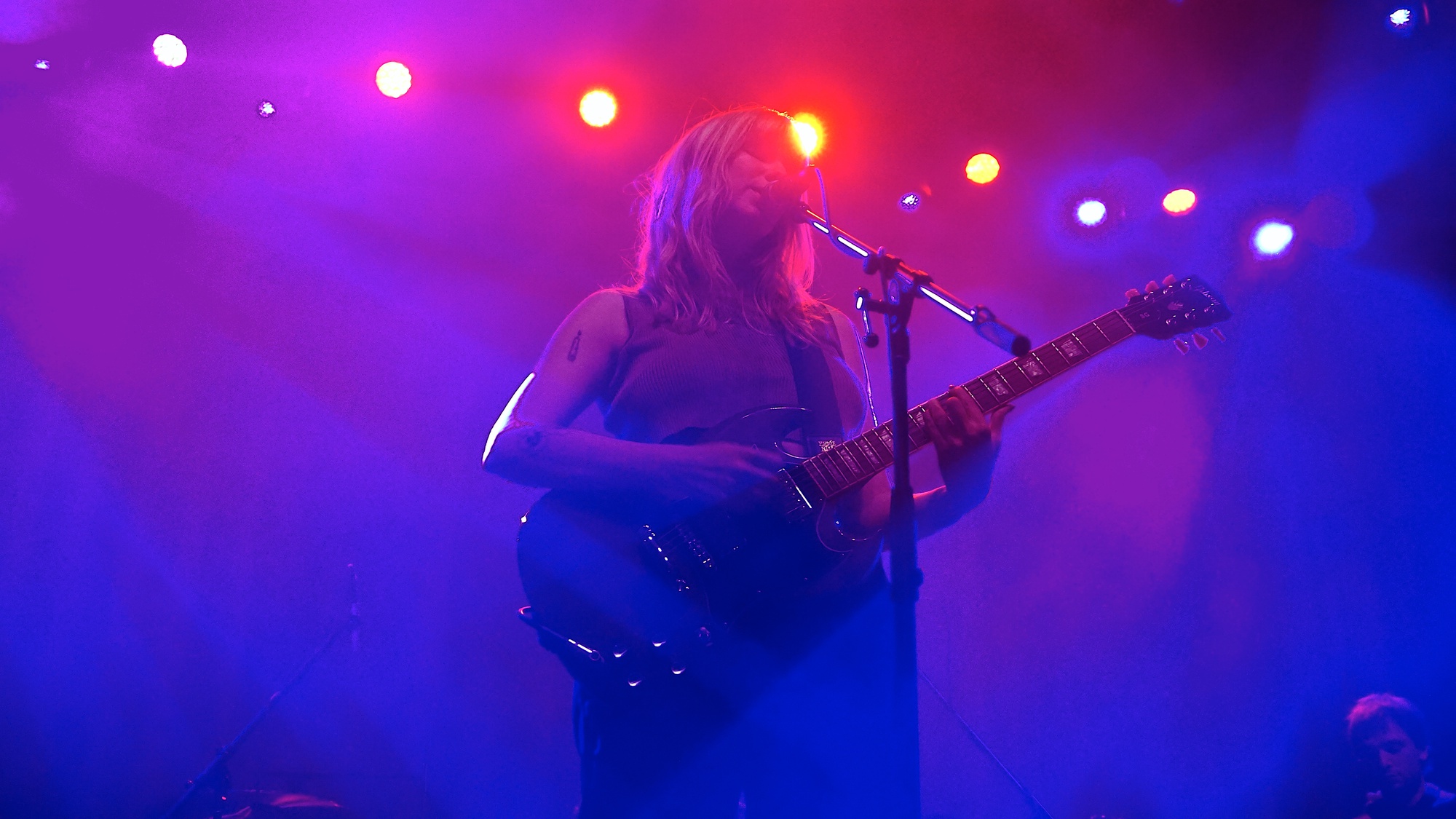 By Courtesy of Asher Montgomery

Setting the mood before the show was the opener, Slow Pulp. All eyes were on lead singer Emily Massey during the set — her soft, raspy voice pulled people in. During the verses, she’d stop playing her guitar and lock her hands behind her back. She raised up on her tippy toes as the pitch got higher.

“If you know this one, sing along,” Massey said to the audience before playing the band’s song “High.” She sang and strummed the guitar on her own for the first verse. As she belted, “I just think I’m too, high” the drums and the ’90s-rock-sounding guitar effects came in. As they all head banged to the chorus, the crowd was swept into the sudden intensity. If the audience didn't listen to them before, they sure do now.

Unlike the dark blues and pinks from the overhead light that gave Slow Pulp such a moody, emotional presence, Alvvays was nearly entirely lighted by the projector that shot out different scenes and patterns for every song. In “After the Earthquake,” the whole band stopped playing and Rankin's voice was accompanied by some keyboard noises with no particular melody that sounded like the wind. Fittingly, the back screen was an ocean.

“Those days, I’d never let you fall apart,” Rankin sang, both hands muting the strings of her guitar.

Then, when the song picked up with violent down strokes from Rankin, and the sudden upbeat drums, the back screen turned into a vintage film of an old dirt road. O’ Keeley soloed on the guitar and the crowd danced.

They played cleanly throughout, and it seemed like every piece of the performance was practiced and practiced again and practiced again. Maybe it's the fact that this was their last show, but it was the cleanness that allowed their eccentric experimentation to work. Each individual melody worked in tandem to create a complex and layered sound. This precise balance and the perfect timing in each of their songs was maintained on the stage.

“Are you awake now?” Rankin screamed.