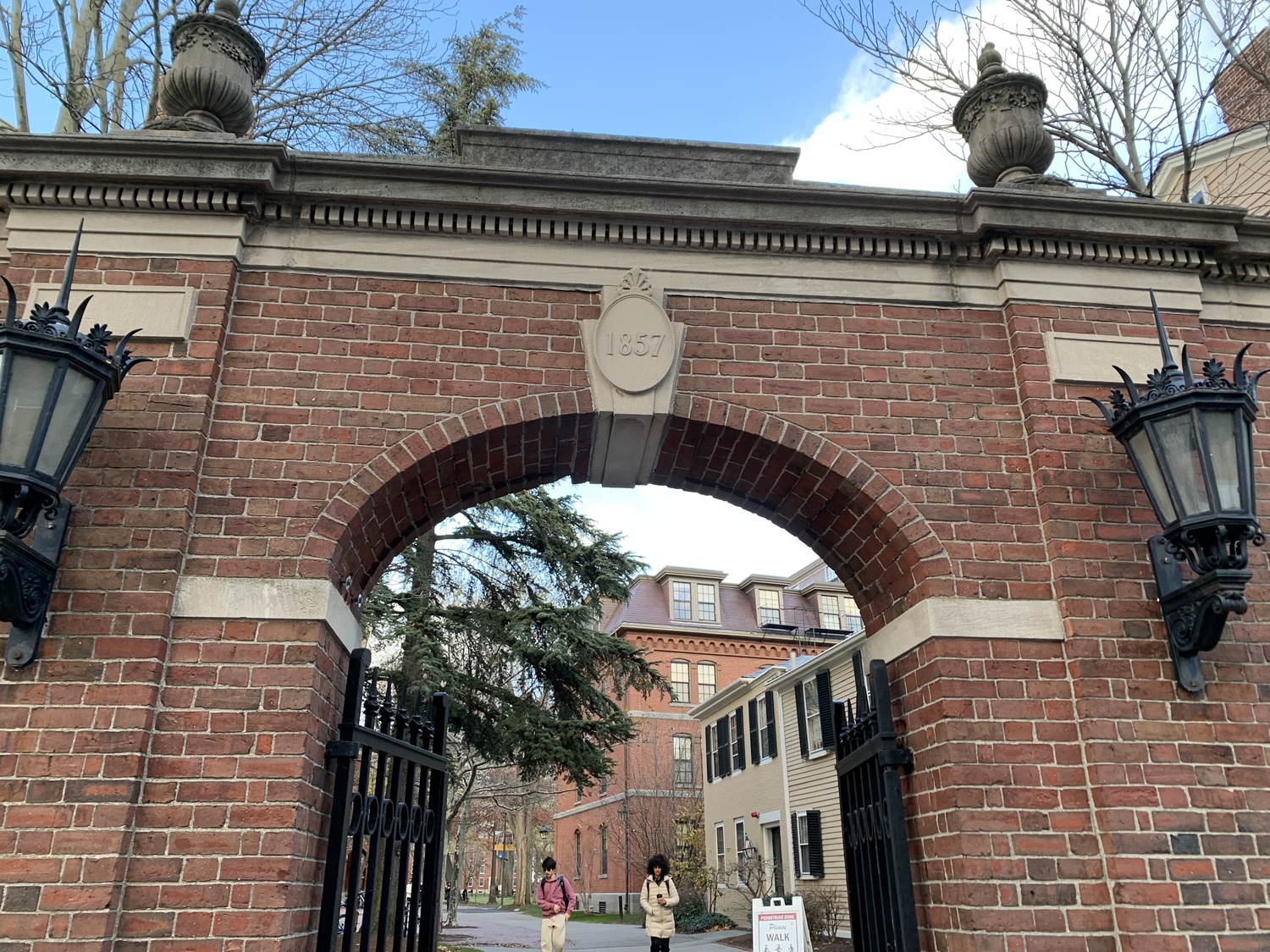 The Wadsworth Gate is also known as the Class of 1857 Gate after the class that sponsored it. By Sophia N. Downs
Advertisement
Advertisement

The Class of 1857 and the Gate They Left

If you’ve ever stepped foot on Harvard’s campus, you’ve seen the Wadsworth gate, though you may not have realized it. Nestled between the urban bustle of Harvard Square and the red brick of the Yard, I walk past it nearly every day, but rarely do I stop to ponder its history. The gate is also called the Class of 1857 Gate after the class that sponsored it — a class whose joyful graduation barely preceded the advent of the Civil War.
By Sophia N. Downs

If you’ve ever stepped foot on Harvard’s campus, you’ve seen the Wadsworth gate, though you may not have realized it. Nestled between the urban bustle of Harvard Square and the red brick of the Yard, I walk past it nearly every day, but rarely do I stop to ponder its history. The gate is also called the Class of 1857 Gate after the class that sponsored it — a class whose joyful graduation barely preceded the advent of the Civil War.

When James Starr, a member of the eponymous class of 1857, entered Harvard in 1853 at the age of 16, the Wadsworth gate did not yet exist, but other familiar Harvard buildings did. Starr and I have both spent time in the Yard’s Holworthy dormitory. In a memoir, Starr reflects fondly upon his time at Harvard, reporting that Holworthy was “the most comfortable place I ever lived in.” My friends might leave mixed reviews about Holworthy, but his sentiment is appreciated. Upon leaving the school, he described his time there as “the four most pleasant and profitable years of my life.”

Starr spent his years at Harvard receiving a general education which consisted of subjects such as philosophy, physics, and Latin along with the 67 other men in his class. Here again, I found myself connecting with Starr as I read his memoir. I have yet to take a physics course, but have certainly studied philosophy and Latin while at Harvard. Outside of class, students could be found practicing their oratorical skills by delivering speeches at the Hasty Pudding Club or joining various niche societies, ranging from the Natural History Society to the “Med. Fac.” Society, notorious for its pranks.

The 1857 Commencement featured sentimental speeches and fond memories. One student reflected upon his friendship with his classmates, expressing that “kindest acknowledgment and gratitude are due while towards no one in the class have I any hostile feelings.” Another remarked that “this college life” consisted of “the happiest day this side of the grave.”

James J. Storrow, Class of 1857, whose son is the namesake of Storrow Drive, said, “Do not imagine that we live alone. Real friends and real companions we find in the commonwealth of scholars.”

While the festivities of the day were a time to reminisce on memories with close friends, the class poem introduced a sense of foreboding for the future: “How soon we too at rest may lie / We’re standing always on the brink / of the abyss – Eternity!”

The Class Ode added to the gravity: “the world with its hazards, its turmoil, and strife/ Calls us now from these scenes of repose/ And sterner and stormier phases of life.”

Despite these omens, the graduates celebrated that evening. One account describes how graduates drank down “a bowl of punch with crackers and cheese as accompaniments, both of which were consumed with gusto until the setting sun.” Another account describes the “jovial and natural scene” on Commencement day, when “songs were sung and plenty of noise of course was made.” 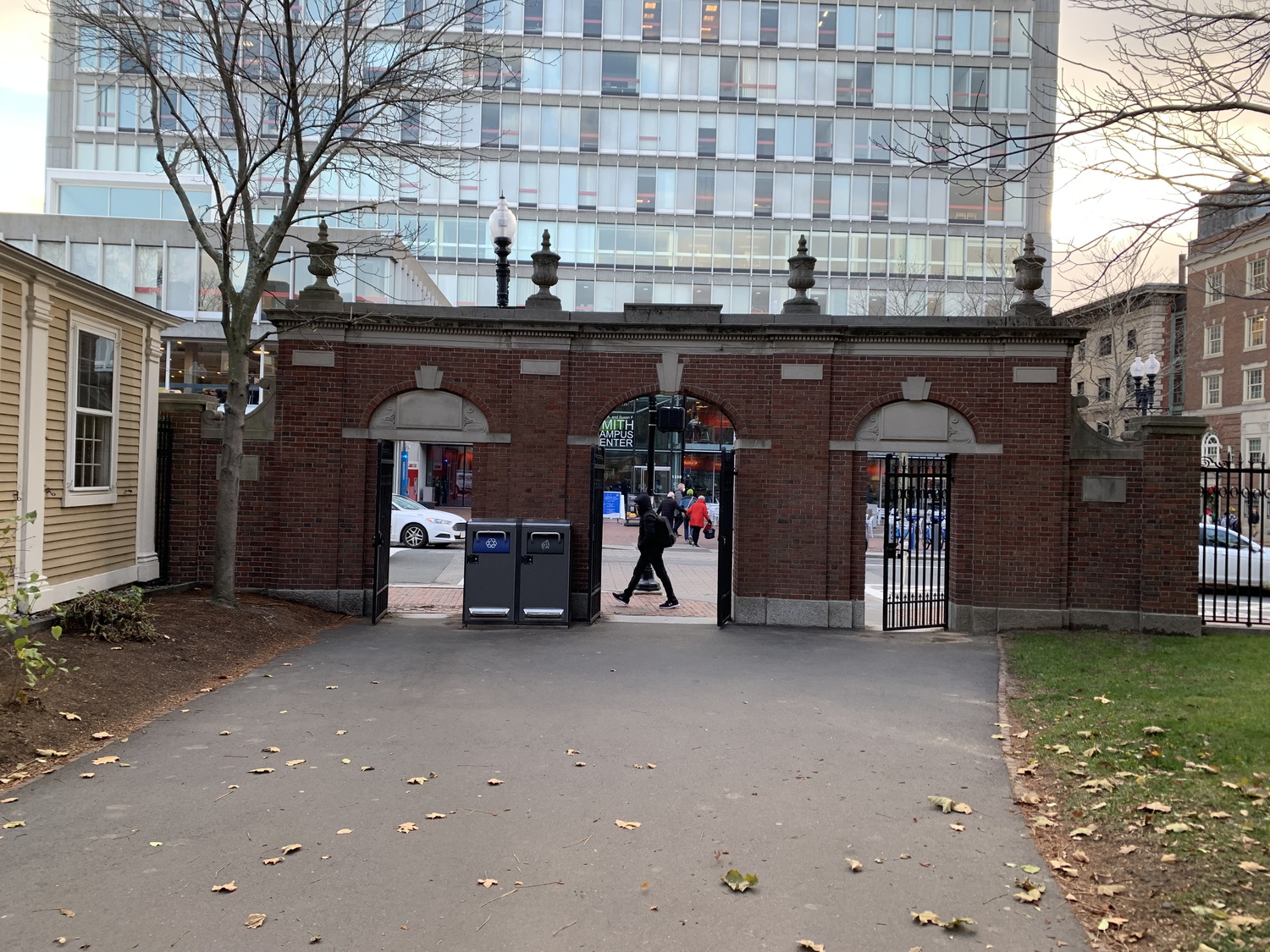 But just four years after these celebrations, the country broke into civil war. Starr enlisted to fight on the Union side.

Many others from Starr’s class at Harvard also enlisted. Some served as medical personnel for both the Union and the Confederacy. In some instances, classmates fought alongside each other. In Starr’s case, he fought directly against an “old college friend.”

In his very first military engagement, Starr fired upon the retreating cavalry of William H. F. “Roony” Lee, son of Robert E. Lee. Soon after, Starr learned that one of his classmates had been killed in action. He continued serving until 1864, rising to the rank of Lieutenant Colonel.

Various members of the class of 1857, including George Whitemore, fought in the Battle of Antietam, known as the bloodiest one-day battle in American military history. Whitemore’s rifle was stolen from him just before the conflict, so he ran to the front of the ranks and took a gun off a fallen soldier, fighting for the Union until he was shot and killed. His body is buried in the Mount Auburn cemetery, less than two miles from Harvard.

“Those great and bloody fields,” as a friend who wrote to the family of a deceased classmate called them, saw the loss of thousands upon thousands of lives. Truly, “[T]he fate of the nation trembled in the balance” and the Union’s victory “changed the history of the country,” he wrote.

In 1882, the Class of 1857, albeit with diminished numbers, gathered together for a 25-year reunion. In a report created for the event, an alumnus wrote: “at this turning point in our history, let us stand nearer to each other as classmates, with new hopes and new resolutions for the future.”

“This is a brotherhood closer than kin,” he added.

Starr died of typhoid-pneumonia the year before the reunion. His biography notes that “he never fully recovered from the severe strain on his constitution made by the war,” but that even years down the line, “his best affections went out to Alma Mater and the men of his class.”

A few years later in 1889, Harvard started building gates around the Yard. The Class of 1857 was the first class to raise funds for a gate, which was finished in 1901.

Like other gates encircling Harvard Yard, the 1857 Gate was designed by the architectural firm McKim, Mead, & White, the same firm that designed New York City’s Pennsylvania Station and the Boston Public Library. Blair Kamin, editor of the book “Gates of Harvard Yard,” said in a 2016 interview that the gates “weren’t just symbols of exclusion and elitism” but also served as “symbols of belonging.” He added, “They were symbols of being part of something greater than oneself.”

In 1910, a Latin inscription was added: “Felices ter et amplius quos inrupta tenet copula nec malis divulsus querimoniis suprema citius solvet amor die.” In translation: “Thrice happy and more are they whom an unbroken band unites, and whom no sundering of love by wretched quarrels shall separate before life’s dying day.”

Although Harvard remains notoriously exclusive, it has opened its gates to a far more diverse group of people than those present in 1857; and despite the similarities I’ve noted, the activities we participate in, the classes we take, and even the food we eat is vastly different.

However, more than a century later, the message of the gate remains universal. In Kamin’s words, this inscription is a “touching memorial to the unbroken bonds of friendship that this class had.” But it’s an oversimplification to leave it at just that. The wounds of the Civil War run deep; we cannot ignore the hundreds of thousands of casualties, and the millions more who suffered under the yoke of slavery, which several members of the Class of 1857 who enlisted with the Confederacy fought to preserve. These atrocities cannot be glossed over with a sentiment of goodwill and memories of college friendship. But the words on the gate are an aspiration towards healing, unity, and growth together.

Perhaps the idea of an unbroken band uniting friendships is a platonic ideal, unreachable in reality, but I believe it’s an ideal ever worth striving towards.