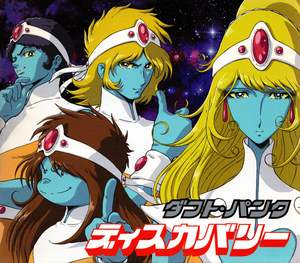 Daft Punk’s “Interstella 5555: The 5tory of the 5ecret 5tar 5ystem“ (2003) is an ode to the visual album. Using 14 music videos from their album “Discovery“ (2001), the project comes together to create a masterpiece of a film. The film is a refreshing reminder of what can happen when artists have the freedom to take risks and collaborate. “Interstella 5555“ is a colorful amalgamation of different art mediums that manages to highlight the strengths of both the musical and visual artists. As a result, the film becomes a masterclass in storytelling, as it manages to convey an allegory for the exploitation of artists in the music industry without dialogue.

The film begins with visuals of an otherworldly universe as the music slowly picks up in the background. The camera pans down to the horizon of a planet before a blue face sings, “One more time!” The source of this music is soon revealed — a stadium that resembles a UFO, containing the band and four main characters: a drummer named Baryl, a guitarist named Apregius, the bassist, Stella, and the keyboard player/lead singer Octave. The concert in front of thousands of aliens doesn’t last long, as the dance song comes to a halt when eight bells sound — and give way to an electronic rock guitar, marking the transition to track two, “Aerodynamic.” The accompanying visuals are just as gripping, as men in armor and masks chase after the band. They capture all four members, and one final bell sounds, as the hero of the story, Shep, is alerted of the band’s kidnapping, leading into “Digital Love.”

Daft Punk and their supervising director, legendary manga and anime creator Leiji Matsumoto, pay special attention to the intros, outros, and transitions of and between songs, and many of the videos end in cliffhangers. The cut to Shep’s crashed spaceship at the end of “Digital Love” sets up his rescue mission story arc, leading into “Harder, Better, Faster, Stronger.” During this song, the band members are stripped of their clothes and color and turned into people with completely new identities. The mastermind behind all of this planned on making them into a globally successful band, The Crescendolls. But the sight of Shep represented the glimmer of hope that the aliens would make it back to their planet. The intro to the next song, “Crescendolls” sets the tone for their inevitable worldwide success. They board a private jet and arrive in a city in a stretch limousine with “The Crescendolls” on the license plate.

“Interstella 5555“ showcases a range of complex emotions throughout its 68 minute runtime. “Digital Love,” is an upbeat electronic pop love song that Shep sings about Stella before he knows that the band has been taken. He has a dream about her that takes place in a colorful dreamworld that he revisits, with her, in the film’s other love song, “Something About Us.” But “Something About Us” is an unbelievably intimate song about fleeting love. “It might not be the right time,” Shep sings to Stella. He had been waiting for a moment with her for the entire film, and it finally materialized in this bittersweet moment. “Nightvision” follows “Crescendolls,” and the contrast in tone between the two songs, coupled with the pacing of “Nightvision” makes it clear how mentally and physically drained the band members are due to them being overworked.

In the film, the music does what dialogue doesn’t, or rather, couldn’t. In “Aerodynamic,” as the guitarist runs away from the men, he holds his instrument by his side as a shredding guitar solo plays in the background. The disco-influenced track, “High Life,” captures the glamorous feel of stardom with its big city visuals and high profile people.

The animators also used weather to bring out the vibe of certain songs. The video for “Nightvision,” the busiest song featured, takes place on a rainy night. The scene of Stella looking out the window longingly, not knowing that Shep is out there looking for them stands out in particular. The video for “Veridis quo,” the most revelatory video of the film, features a snowstorm on the drive to Darkwood Manor — a house straight out of a gothic novel — one of the many examples of the environment mimicking the music and the mood.

This visual album is a fun and re-watchable gem that is underappreciated compared to its accompanying album “Discovery”. Daft Punk and Leiji Matsumoto crafted one of the most beautiful stories of the early 2000s.