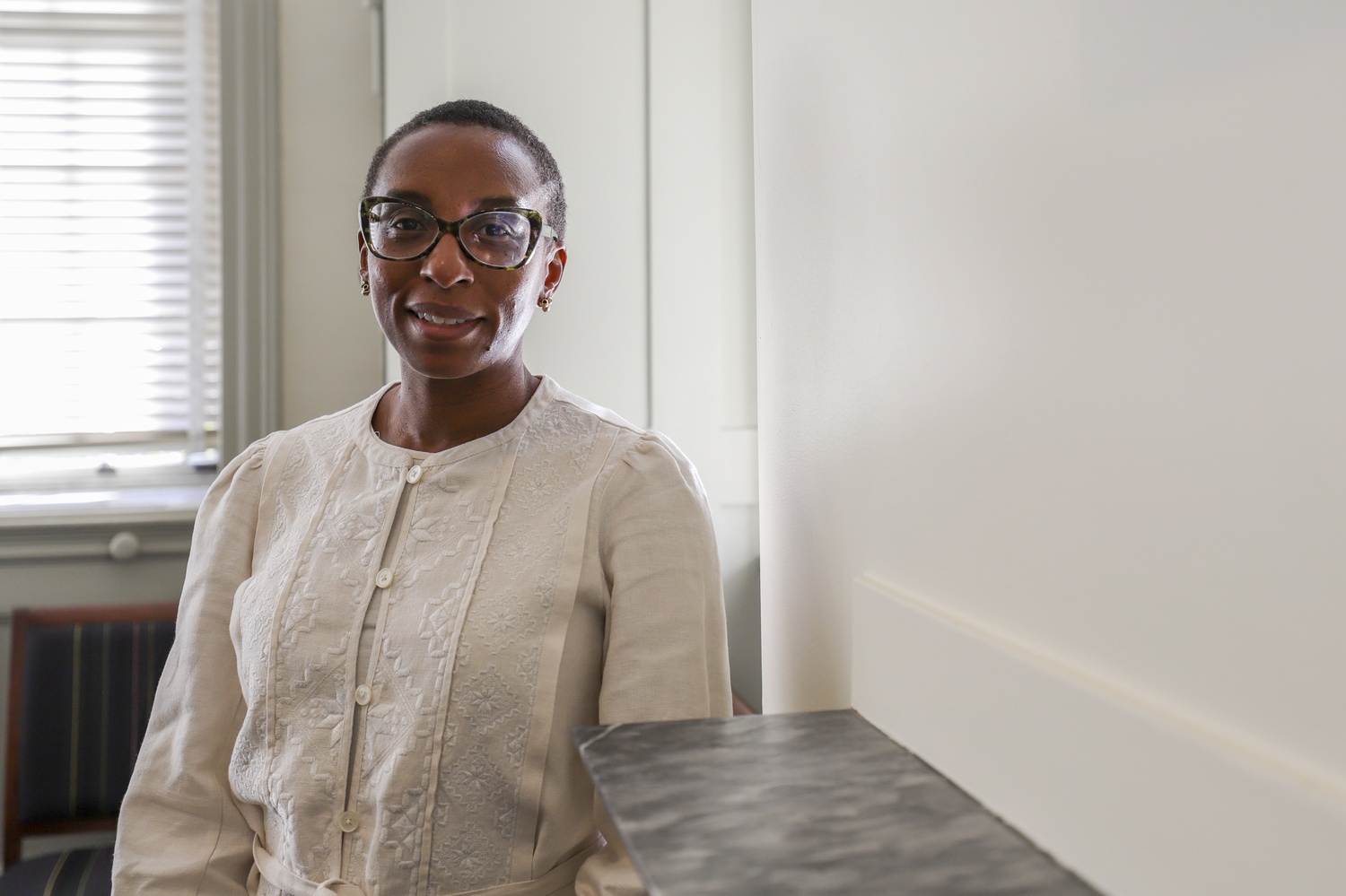 Dean of the Faculty of Arts and Sciences Claudine Gay poses for a photo in her office in University Hall. By Allison G. Lee
By Kyla N. Golding, Crimson Opinion Writer
Kyla N. Golding ’24, a Crimson Editorial editor, is a History of Science and Studies of Women, Gender, and Sexuality concentrator in Adams House.

I want to say that 2022 has been a year for Black women. The truth is, though, every year is a year for Black women. From January to December, Black women fight in the latest battles of long-standing campaigns — for equal pay, reproductive justice, the continued survival of democracy — relentlessly pursuing avenues for change. But this year we also dominated the Emmys, Meghan Markle reclaimed her narrative from the British press, the nation rallied to bring Brittney Griner home, Minnesota watched as Black women were elected to its state senate for the first time in its 164 years of statehood, and the nation watched as the first Black female justice was confirmed to the highest court in the land.

And to top the year off, right here at Harvard, Claudine Gay was named the University’s 30th President — the first person of color and the first Black woman to hold the premier position at the world's premier institution.

So today, we celebrate because when Black women win, moments become movements.

Seeing a Black woman elevated to one of the highest positions in our institution — uplifting and affirming both her Blackness and her womanhood in a way that combats Harvard's historical mistreatment and rejection of both identities — is certainly cause for celebration. Black Harvard rejoices. Black Harvard women — especially those who share in her Caribbean descent — sit filled with pride, our emotions running high. Over the last dozen hours, I have watched as we each rush to repost the snippets of her joyous giggles at her raucous reception, proudly showing the world that the next face of Harvard, for the first time ever, looks like us.

We raise our flags and spread word to family group chats that not only the fairest of them all but also the highest-ranked is Black. We celebrate Dean (and, now, President-elect) Gay the way we celebrated Princess Tiana, Duchess Meghan, Vice President Kamala, and Justice Ketanji. And we champion this moment as a shining pillar of possibility for the realization of liberatory pursuits for people of underrepresented identities on Harvard’s campus and beyond.

Because when Black women win, we memorialize them.

Claudine Gay is an exceptional woman. She is a scholar who believes in imaginative, interdisciplinary pedagogy, and a much-admired administrator whose mission has been to foster a creative, intellectually vibrant, and socially responsible Faculty of Arts and Sciences. Colleagues say that Gay’s commitment to inspire and inquire while amplifying diverse voices and views makes her the perfect fit for the celebrated gig. As our community enters this new chapter, it does not yet know just how lucky — and wildly undeserving — it is to have this friend, wife, mother, and trailblazing daughter of Caribbean immigrants at the helm.

As FAS Dean, Claudine Gay has steered the University through tempestuous times. When our campus and the world beyond it was turbulent, her hand was steady. Over the course of that time, the decisions that came across her desk demanded the same tricky navigational skills needed to maneuver the multilayered texture of the Black woman’s life — the grace and pure competence required to constantly find the best way to achieve a common good against all odds and at times against powerful opposition. In contentious conversations, of which there were surely many, she was expected to move seamlessly, each time with unwavering poise. No longer simply herself, Dean Gay — friend, wife, mother, daughter, educator — became, like so many Black women, an allegory for responsibility, called to be visible and loud or behind-the-scenes and quiet as the moment demanded.

But when Black women win, their great power comes with great responsibility.

Like superheroes, Black women are supposed to be reliable and resilient. When buildings are burning and people need to save the day – or, too often, save face – we are often called on to put the fire out. But to be the first responder is no easy feat, and we run into each crisis with the weight of the world on our shoulders. We must fit through closed doors while breaking them down, sift through the soot while making way for the next generation of firefighters, all while ensuring that nobody gets burned or sick from the smoke.

Claudine Gay will become the first University President tasked with carrying the heavy legacies of both Harvard and Black women simultaneously at an institution where, at one time, neither were permitted. And, whether we are criticizing her missteps or praising her accomplishments, we must remember that to be the first Black woman selected for such a high role tends to raise the stakes — that the vitriol she will be subjected to, even if well-warranted, will often echo with the sordid truth that the institution she will lead wasn’t built with women like her in mind.

There will undoubtedly be days that we are prouder to have Claudine Gay represent us as University President than others. Every day, we must remember that while our feelings are valid, they must also be nuanced, compassionate, and sensitive. I’m sure that the Harvard community will continue to rally, organize, and demand that our institution finally realizes the promises of its mission, as they should. And this inherently requires holding even our first Black female University President to the highest standards of anti-racism, anti-imperialism, and anti-inequity standards. But we should never forget that progress depends on love, something the world often doesn’t give Black women enough of.

To love Black women means to listen to, protect, and see us, to make it a point to fight for us as we fight for everybody else, and to trust us. Without question, I can say that the people I trust the most in this world are Black women. And so, in return for Gay’s vow to pour into us, we must also vow to pour into her. We should want more for her, the way we want more for us. We should want her to enter rooms where she is valued, to feel fulfilled by her work, to be able to celebrate her wins without the trauma that too often comes with winning as a Black woman at Harvard and in America.

So, congratulations Claudine Gay. I hope you stand firm in your dreams for the University, that you will show us all your version, self-defined and self-determined, of what it means for Black women to win, especially here at Harvard. I’ll be rooting and praying for you all the way through.

Because when Black women win, we’re all better for it.

Kyla N. Golding ’24, a Crimson Editorial editor, is a History of Science and Studies of Women, Gender, and Sexuality concentrator in Adams House.