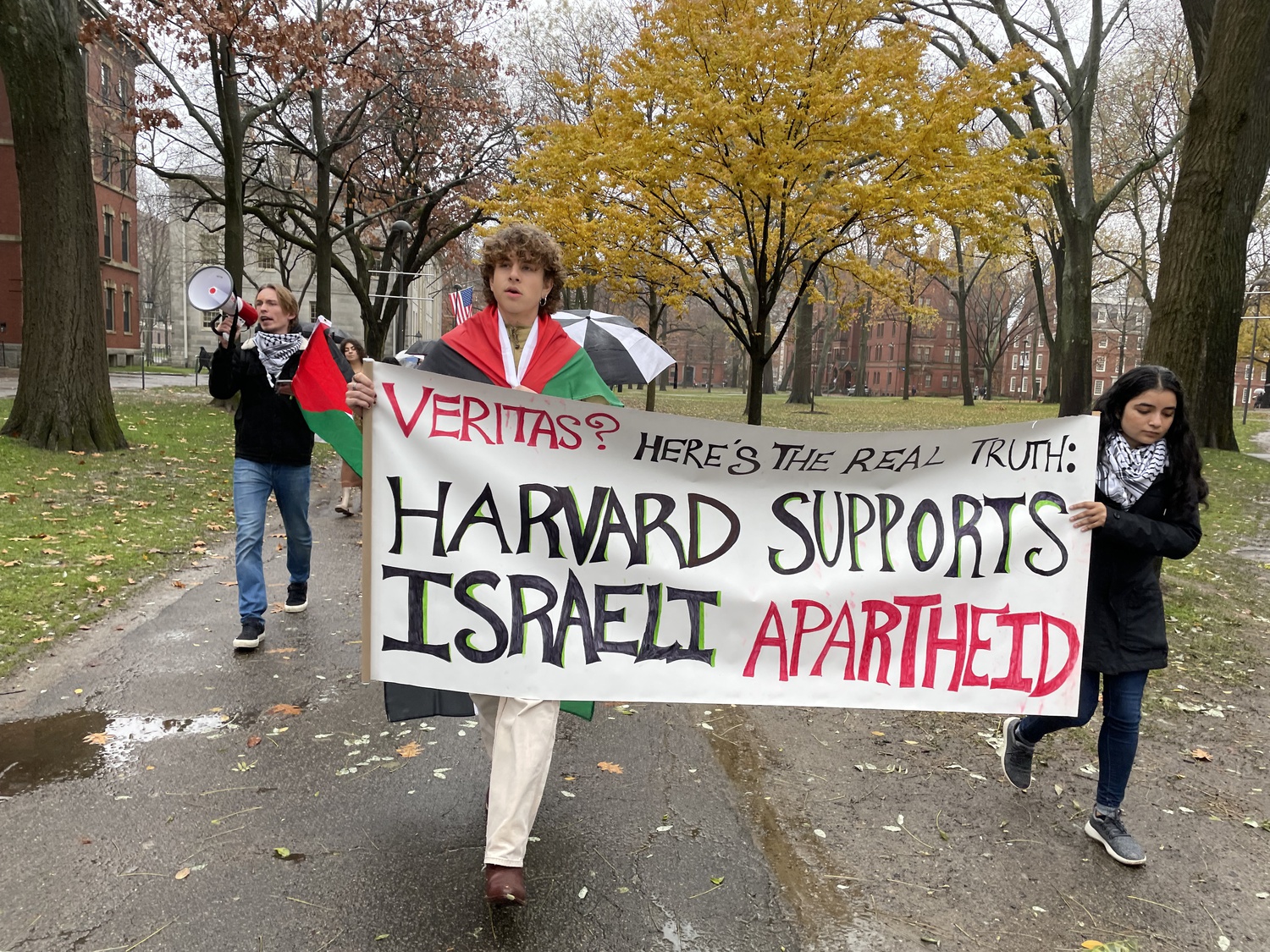 More than two dozen students held a a vigil and staged a rally in Harvard Yard on Wednesday afternoon to protest the recent killings of several Palestinian citizens.

Attendees gathered in the rain near the John Harvard statue for a moment of silence, reading out the names of 12 Palestinians who were killed by Israeli forces in the last two weeks. The protestors then marched through Harvard Square calling for the liberation of Palestine and Harvard’s divestment from “Israeli Apartheid.”

Sanaa M. Kahloon ’25 — a member of the Palestinian Solidarity Committee, the student group responsible for the event — said she helped organize the protest to “make sure that people on campus are aware of human rights abuses that are going on.”

“Human rights abuses affect our community because we do have Palestinians and Palestinian Americans as part of our Harvard community,” Kahloon said. “These are issues that take up their daily consciousness, and it should take up ours here at Harvard too.”

Tor Wennesland, the United Nations Special Coordinator for the Middle East Peace Process, told the UN Security Council in late October that “2022 is on course to be the deadliest year for Palestinians in the West Bank” since the Office for the Coordination of Humanitarian Affairs began tracking data in 2005.

The UN OCHA has reported 168 Palestinian fatalities in 2022, according to the most recent data.

Charlie K. Benjamin ’26, who spoke at the rally, called on Harvard to end its “complicity in the oppression of Palestinians” during the rally.

Harvard University spokesperson Jason A. Newton declined to comment on the protest.

Shraddha Joshi ’24 told the crowd at the rally that United States residents and Harvard students are both “complicit in the oppression of Palestinians.”

“Let’s ask ourselves how we can continue advocating for Palestine and human rights even when it’s not comfortable,” Joshi said. “In our classes, in our affinity spaces, amongst our friends, in the professional choices we make, let’s call out the ‘progressive except for Palestine’ double standard.”

Joshua D. “Josh” Willcox ’23, a member of the Palestinian Solidarity Committee, urged attendees to read a report about Harvard’s investments published by an array of student advocacy groups in November. The student groups staged a protest at the Harvard-Yale football game to raise awareness about the report.

“We want proof in our hands that this university is not exploiting marginalized and oppressed groups around the world,” Willcox said. “We demand that Harvard start advocating for a free Palestine, liberated from the violent colonial apartheid regime.”

“So thank you all for coming and free, free Palestine,” Willcox added.

A previous version of this article misattributed quotations to Joshua D. Willcox ’23 and Charlie K. Benjamin ’26. It has been updated with the correct attributions.