Tailgates and Turkeys: Students React to Harvard-Yale Weekend with Banners and Cheers 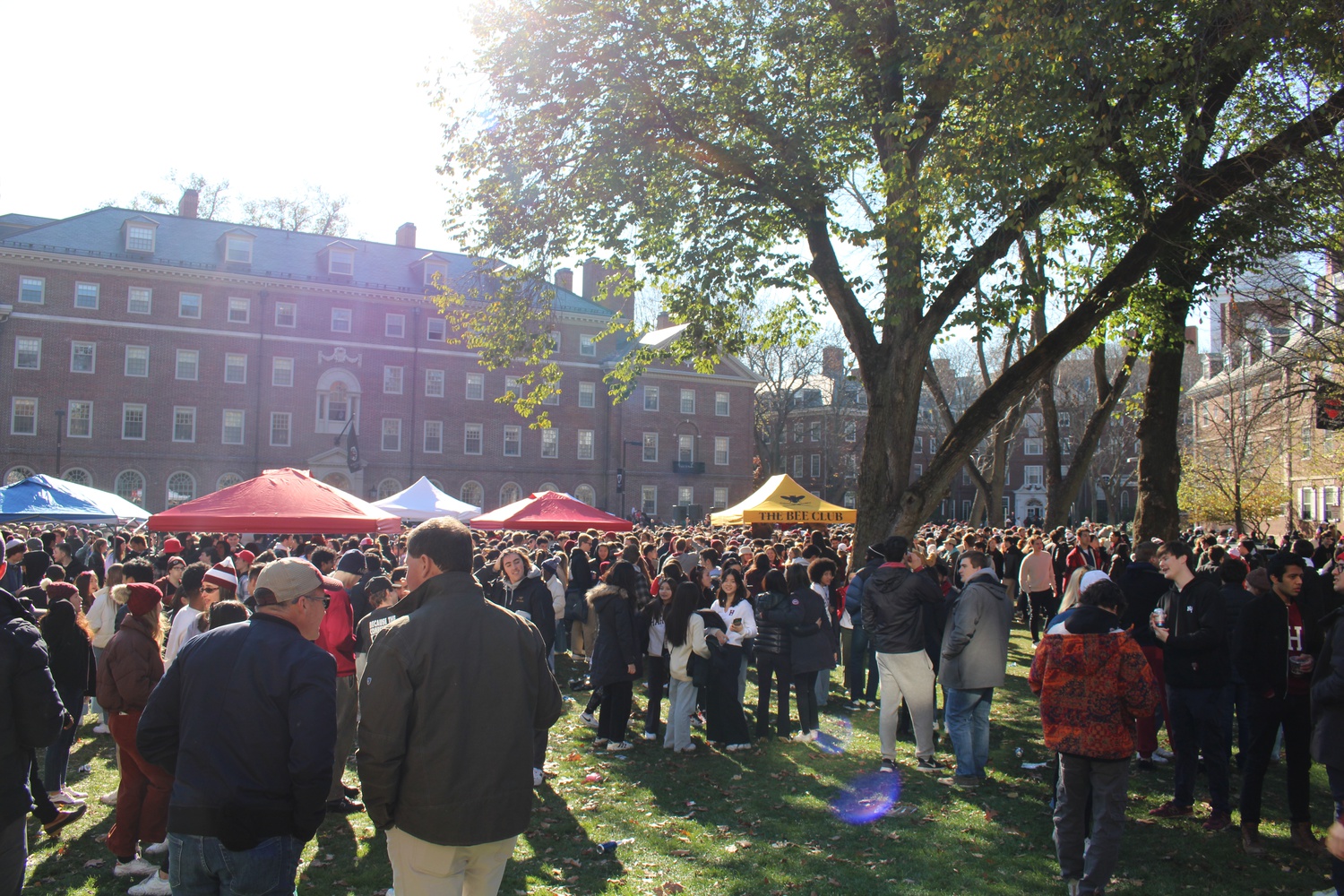 Harvard and Yale undergraduates attend an unofficial tailgate on the lawn in front of the Malkin Athletic Center before The Game on Saturday By Claire Yuan
By Miles J. Herszenhorn and Claire Yuan, Crimson Staff Writers

The 138th rendition of the Harvard-Yale football game on Saturday only lasted a few hours, leaving Crimson fans disappointed by a 19-14 loss. But for Harvard students, The Game was an all-day affair featuring tailgates and turkeys.

Students and alumni alike milled about Mignone Field for the official Harvard tailgate, which served burgers, hot dogs, and several side dishes.

Lucas H. Amory ’24, who had not attended a football game since the Harvard versus Brown game in 2021, said “the energy has been kind of impeccable.”

“Between yesterday and today, just being able to run into a lot of people that I feel like I forgot existed pre-pandemic that I knew then, that’s really just been the highlight of the entire thing,” he said.

In addition to the College-sponsored tailgate, hundreds of students descended on the lawn outside the Malkin Athletic Center for an unofficial tailgate hosted by Harvard's final clubs, including the Porcellian and the Bee.

Ryan P. Tierney ’24, who attended the unofficial tailgate, said it served as a “good replacement” for Harvard’s official undergraduate tailgate, which took flack from students for restrictions on alcohol distribution.

“The MAC lawn served as a pretty controlled area where everyone could be relatively safe,” he said. “Could have been a lot worse.”

In the week leading up to The Game, students criticized the University’s restrictions on tailgating, voicing concerns that parties would just move off-campus. A Harvard spokesperson defended the restrictions, writing in an emailed statement that the University was working hard to ensure students have a safe place to engage in festivities.

Turkeys were also sighted at Saturday’s tailgates — though not Cambridge’s regular feathered friends. The Harvard Undergraduate Association piloted the turkey as a new mascot at Saturday’s game.

HUA co-president LyLena D. Estabine ’24, who was polling students on ideas for a new Harvard mascot at the tailgate, said the turkey was introduced at The Game “just to get students excited.”

“This would not replace the Crimson branding,” she said. “This is simply an extra element for student engagement and school spirit here at Harvard, similar to the Stanford tree.”

Allen Y. Zhang ’26, however, was less fond of the turkey mascots.

“I love the energy here — my only problem in this game is I see too many turkey mascots,” he said. “I’d rather have the cat as our mascot, Remy the cat.”

During The Game — which has served as the site of student protests — Harvard undergraduates representing an array of advocacy groups unfurled large banners with messages for the University to “DIVEST.” 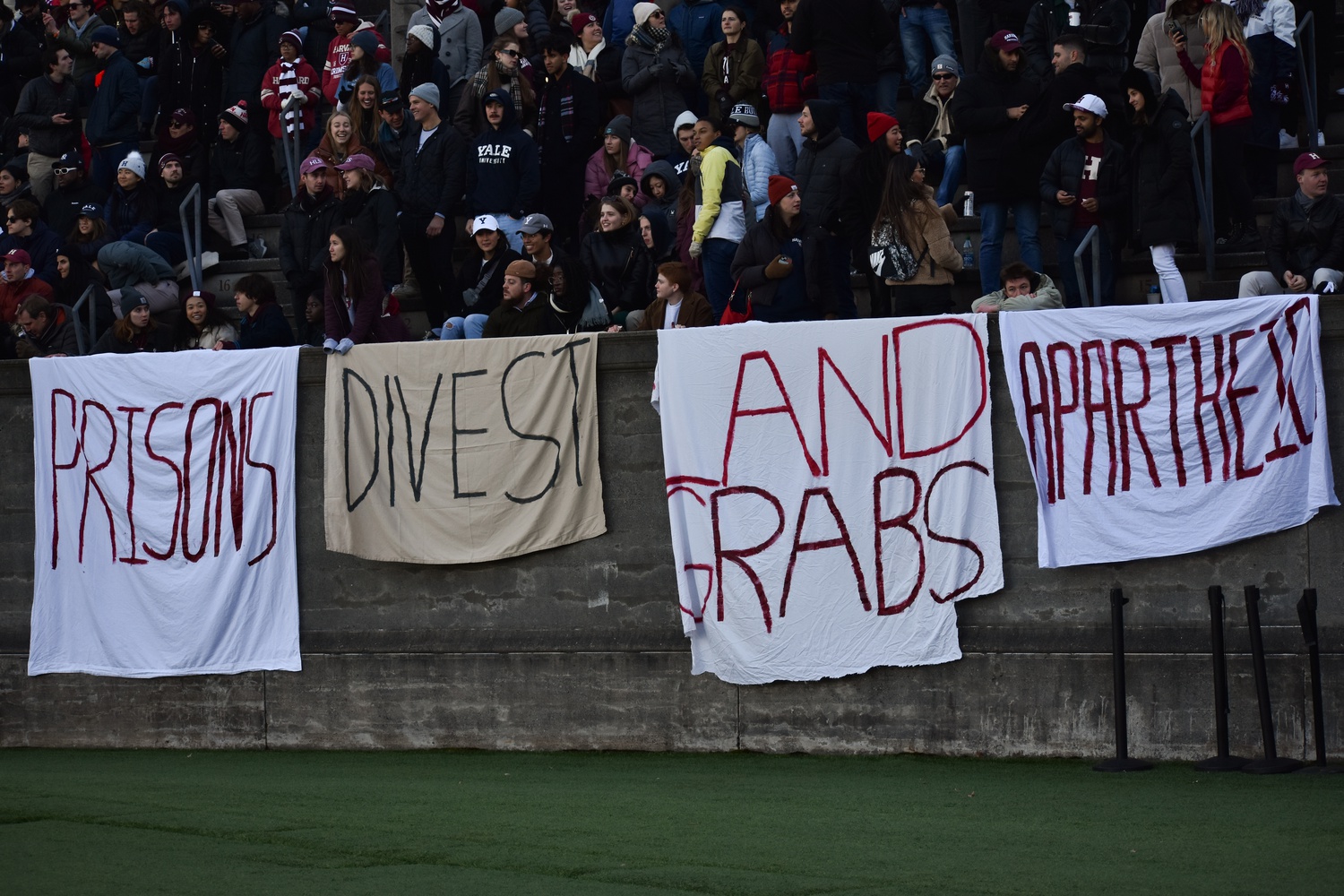 Student protesters held banners over the wall of the stadium during The Game on Saturday. By Christopher L. Li

Brit G. Shrader ’24, an organizer with the Harvard Prison Divestment Campaign, said the banners were meant to raise “awareness about Harvard’s implicitness in the prison industrial complex.”

“We wanted to disrupt this narrative of The Game and get people thinking about Harvard’s investments in human rights abuses and other things throughout the world,” they said.

Syd D. Sanders ’24, a member of the Palestine Solidarity Committee, added that the demonstration was “a targeted critique at specific things like land grabs in Brazil, and Israeli apartheid in Palestine, and the funding for the US military and companies that use prison labor.”

Watching The Game from the stands, Talya W.K. Li ’24 offered a concise summary of the Harvard-Yale weekend.

“The people are great — the football is kind of mid,” she said.