‘The Bluest Eye’ Review: Toni Morrison Would Be Proud 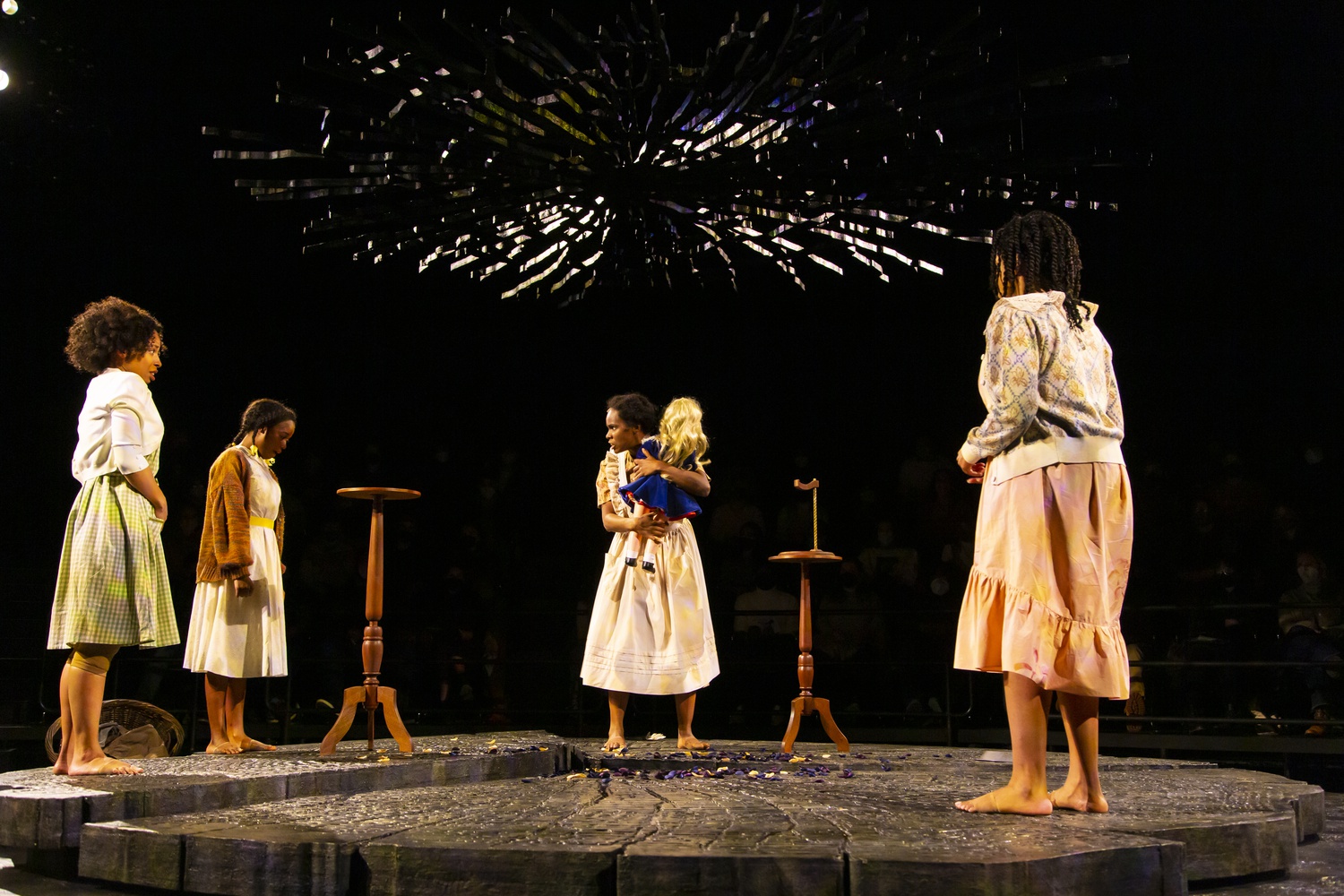 The voices of iconic Black artists like Beyoncé, Jill Scott, and Janelle Monáe reverberating through the Calderwood Pavilion at the Boston Center for the Arts make it clear that “The Bluest Eye” will be no ordinary theatrical experience. Being able to produce a faithful stage adaptation of Toni Morrison’s debut novel feels monumental in its significance — and yet, the production feels incredibly intimate.

Seats are arranged in a circle around the small stage, inspired by the storytelling circles of Black rituals. The design of the stage mimics a cross-section of a tree trunk, reinforcing the deep roots of storytelling circles and evoking the image of a family tree, which is fitting for a play that explores household dynamics. But the tree is grey and cracked through the center, suggesting from the start that something is wrong. When actors take the stage, audiences are immediately pulled in by stunning, pain-filled performances that would do the late Toni Morrison proud.

The cast of eight accomplishes the unimaginable by taking on multiple roles in Morrison’s complex world, seamlessly transitioning from one to the next. But two cast members stand out with their breathtaking performances: McKenzie Frye as Mrs. Breedlove and Brian D. Coats as Soaphead Church.

Haunted and left hopeless by her inability to fit racialized beauty standards, Mrs. Breedlove is one of the most complicated characters in Morrison’s tale. Frye wholeheartedly commits to her character, masterfully conveying Mrs. Breedlove’s deep anguish and frustration. When recounting the racism she faced giving birth to her daughter Pecola (Hadar Busia-Singleton), her voice crescendos into a moan that reverberates around the walls of the theater. When she sings, her voice pierces the hearts of all who listen.

Frye acts with great attention to physical detail: she limps slightly as she walks, on account of Mrs. Breedlove’s lame foot. Every move in the fight with her husband Cholly (Greg Alverez Reid) is calculated and beautifully choreographed.

Brian D. Coats steps into the role of the peculiar “Reader, Advisor, Interpreter of Dreams” Soaphead Church with the same ease. In his most striking scene, Church writes a letter to God, claiming his superiority after leading Pecola to believe that her eyes had turned blue. He begins seated, speaking in a calm, polite tone, but his performance intensifies until he is on his feet, howling about performing a miracle that God could not.

Coats embraces this eccentricity and madness, aided by a costume that exquisitely mirrors his character’s personality. Underneath a dirty and worn overcoat is a button down shirt and tweed waistcoat, contrasting the intellectual interior with an unkempt exterior. Between Coats’ faithful performance and the efforts of a talented costume department, it’s as though Church walked right off the page and onto the Calderwood Pavilion stage.

Playwright Lydia R. Diamond adapted Morrison’s novel with her newborn son in mind, which becomes increasingly apparent whenever Claudia (Brittany-Laurelle), Frieda (Alexandria King), and Pecola take the stage. While reading the novel, comedy tends to slide under the radar, overshadowed by the more serious subjects of the narrative. On stage, however, these lighter, impeccably timed moments are given a chance to shine. Whether through sisterly banter or a sassy “Oh no she didn’t” directed toward the audience, the heavy atmosphere of the theater is frequently lightened by laughter. Among many other things, the show is an ode to childhood, rooted in love and innocence.

Still, the most compelling scenes of the play are the darkest. At the beginning of the show, it is revealed that Pecola will be sexually assaulted by her father, will get pregnant, and eventually lose the child. The play builds up to this horrific moment of assault, which is disturbingly visceral in the novel. Awoye Timpo’s production handles the pivotal scene with sensibility and taste. What could have been physically explicit is instead a narration of the events by Cholly with subtle physical reactions from Pecola — the two never actually touch.

It may seem counterintuitive to soften the events of this scene, which provides all-important resolution to the anticipation that accumulates over the course of the play. But it is a calculated and intelligent decision. “The Bluest Eye” is often misinterpreted as a story about the consequences of sexual assault and grief. While the events of Pecola’s life are undeniably devastating, the real tragedy lies in her quest for blue eyes — remains a priority amidst all of her trauma. Diamond and Timpo are wise to slightly de-emphasize the explicit moments, shifting focus to the young girl’s persistent feelings of inadequacy in a world that rejects her beauty.

The impact of the performance is further elevated by its lighting and sound design. When Pecola voices the Dick and Jane narrative, which depicts a happy white family in an ideal home, everything goes black except for lights that pulsate underneath the stage and illuminate the tree’s cracks. A high-pitched ringing fills the air, and all other characters freeze in their tracks. These scenes skillfully diversify the play’s structure, bringing an abrupt end to dynamic moments with eerie stillness.

A similarly innovative technique is used at the end of the play to illustrate Pecola’s descent into madness. She experiences auditory hallucinations, speaking to a version of herself that does not exist. The imaginary voice, echoey and ominous, projects from different speakers around the theater, giving audiences insight into the process of her crumbling sanity.

It comes as no surprise that audience demand for “The Bluest Eye” resulted in two date extensions — the show is now running until Mar. 26. Diamond’s adaptation masterfully guides the story from page to stage and, coupled with Timpo’s brilliant direction, yields a show that is enthralling and unforgettable.