Harvard College Will Hold Housing Day In-Person. But it Won’t Be Back to Normal. 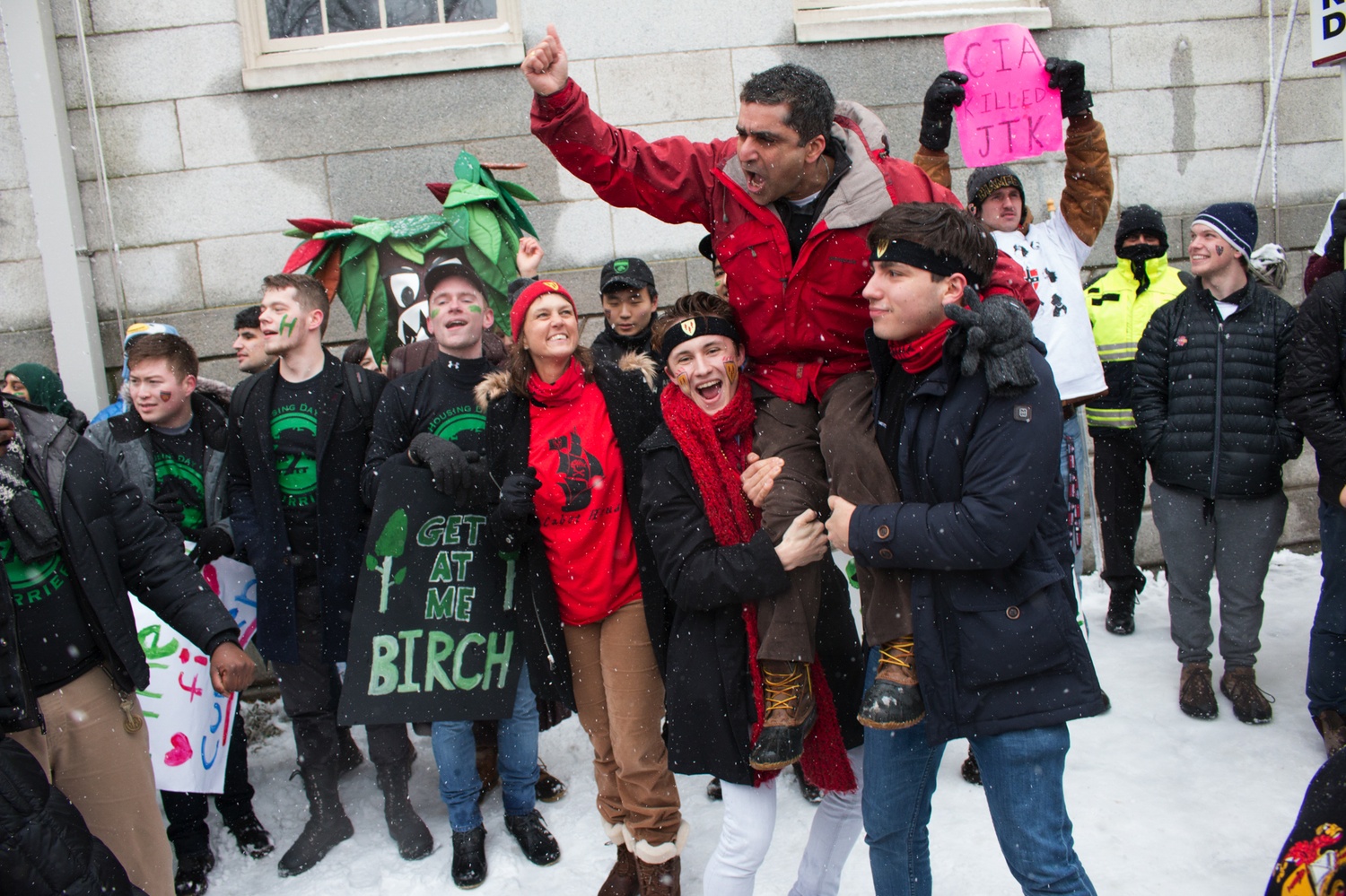 Housing Day is set to take place in-person for the first time since 2019 — but the tradition appears unlikely to return to its pre-pandemic norm.

The College has circulated two Housing Day proposals among undergraduate House Committee chairs in recent days, according to communications obtained by The Crimson. One proposal would move festivities entirely outdoors and the other would allow for a modified dorm storm.

Housing Day is an annual tradition during which freshmen get assigned to one of Harvard’s 12 upperclassman Houses or the Dudley Co-Op. The festivities have been held virtually for the past two years due to the pandemic. This year, the DSO has been working with HoCo members to modify Housing Day’s traditions to adhere to Covid-19 guidelines.

“The Dean of Students Office is continuing to work closely with the House Committees and First-Year Experience on plans for Housing Day,” Harvard College spokesperson Aaron Goldman wrote in a statement Monday night. “Details of what to expect will be shared with students this week. We are excited to celebrate this special event with in-person programming for the first time since 2019.”

Last Wednesday, four HoCo representatives joined administrators from the First-Year Experience Office, Harvard University Health Services, and Environmental Health and Safety to discuss two potential proposals for the pandemic-era in-person Housing Day. HoCo chairs then voted on the two proposals, per an email the DSO sent to HoCo chairs that was obtained by The Crimson, but the results of the election have not yet been revealed.

In 2020, Housing Day was postponed and eventually moved online as the College sent undergraduates home due to the pandemic.

Prior to Covid, Housing Day consisted of upperclassmen congregating in Harvard Yard, carrying signs, and awaiting the signal of a gong at 8:30 a.m. HoCo chairs distributed letters containing the names of freshmen to upperclassmen of the same House. Groups of upperclassmen then “stormed” the freshman dorms to notify blocking groups of their placement and welcome them to their House.

Under the first proposal being considered by the College, the dorm storming tradition would take place entirely outside. Under the plan, freshmen would receive a message directing them to a specific area in Harvard Yard, while upperclassman students gather around the John Harvard statue.

At 8:30 a.m., administrators would notify HoCo chairs of the freshmen’s locations. By 9 a.m., the upperclassmen would storm their assigned locations in the Yard to notify the freshmen of their housing assignment.

The DSO’s proposal advises upperclassmen to “represent their Houses appropriately” while approaching the freshmen. In past years, upperclassmen from river houses have carried signs or worn the merchandise of houses in the oft-undesired Radcliffe Quadrangle while storming dorms in order to prank unsuspecting freshmen.

The second proposal is a revised version of traditional dorm storming that would allow three-person "dorm-storming teams" representing each house to storm freshmen entryways, one at a time. In a break from tradition, though, the groups would be prohibited from entering rooms and instructed to celebrate with freshmen in their hallways — for a maximum of five minutes.

Last Thursday, Director of Residential Programs Charnele S. Luster emailed the two proposals to HoCos chairs asking them to vote for the plan they preferred. The election closed Monday at 9 a.m.

Dunster House HoCo Chair Miyu Imai ’23 said it has been challenging to plan for Housing Day festivities with the morning plans still in limbo.

“We’re kind of making a broad outline with both options in mind,” she said. “We've been planning everything else, but not exactly how to do either the dorm storming or the outdoor option.”

Regardless of which plan is selected, the afternoon and evening festivities remain similar to pre-pandemic times. After students receive their assignments, upperclassmen will line the path outside Annenberg Hall at tables adorned with decorations and merchandise. In past years, the celebration took place inside Annenberg.

In the evening, houses are permitted to host their usual in-person events, including steins and community dinners, so long as they adhere to University Covid-19 guidelines.