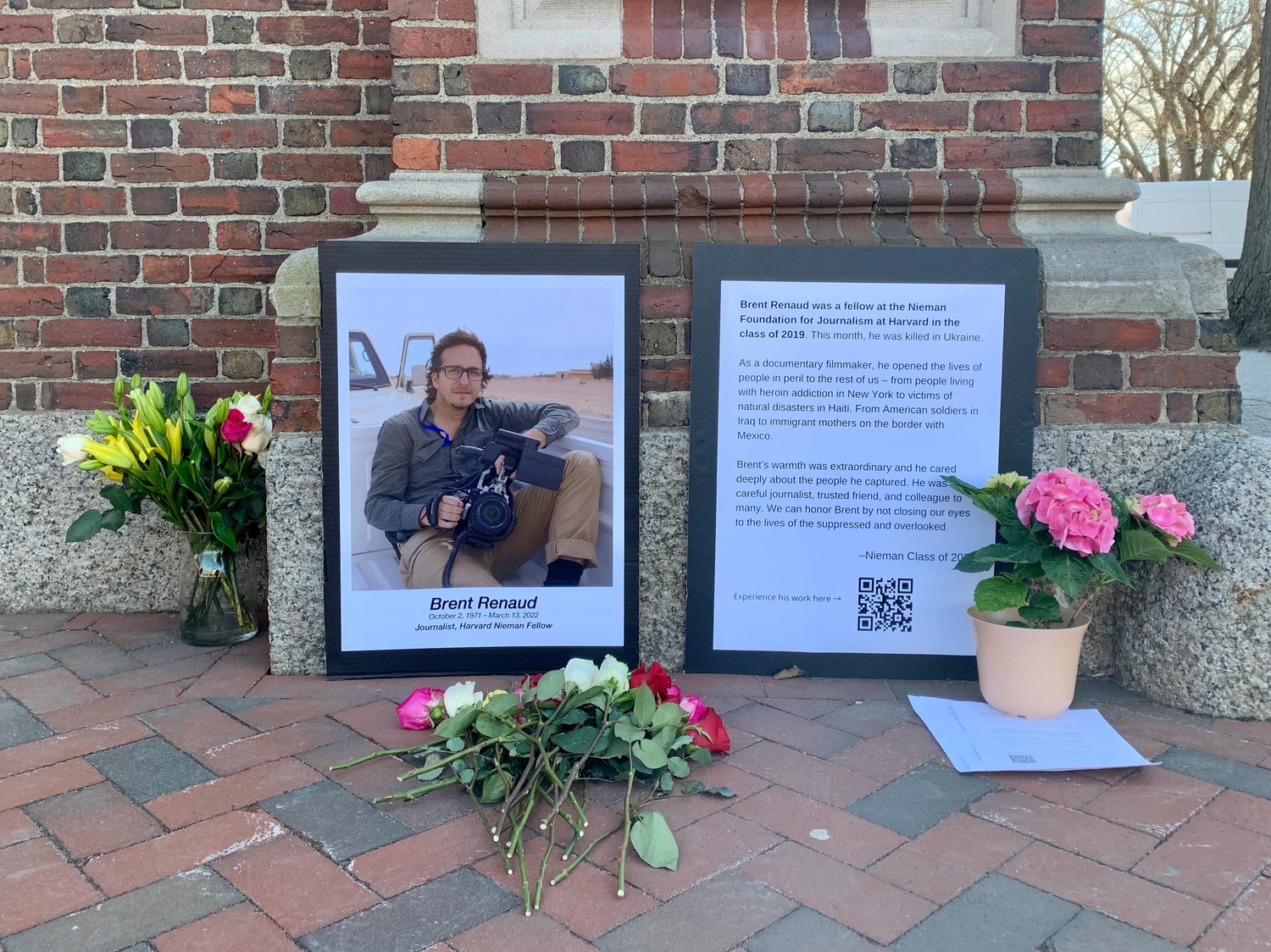 Around 20 people attended the remembrance of Renaud, who was killed on March 13 by Russian forces in Irpin, a suburb of Kyiv, while filming Ukrainian refugees fleeing from the war. He was working alongside Juan Arredondo, another Nieman fellow, who survived the attack with injuries.

An award-winning journalist and filmmaker, Renaud spent the 2018-2019 academic year at Harvard through the Nieman Fellowship, an opportunity for journalists to attend classes and workshops while building relationships with other fellows. Renaud and his brother Craig filmed documentaries for many media organizations, including HBO and the New York Times, covering conflicts such as the ISIS invasion of Iraq and Mexican cartel violence.

Nieman fellow ​​Pacinthe Mattar read an overview of Renaud’s life, and the fellows took turns reading messages sent in by Renaud’s peers from the 2019 Nieman class. At the gate of Harvard Yard, they laid down roses in front of a shrine for Renaud, which included a photograph and a description of his work.

“As a class, we are honoring Brent’s work by doing what drove him as a journalist: shining light on the marginalized, the oppressed and the overlooked,” the Nieman fellows from the 2022 class wrote in a handout distributed to attendees.

Jorge Caraballo, a Nieman fellow who helped organize the event, described the gathering as “beautiful” in an interview following the event.

“​​We really feel that this fellowship is a community, and one of our members was killed,” Caraballo said. “It’s painful for us, but it’s especially painful to those who know him.”

“It was important that we show solidarity not only with another Nieman but with another journalist who was killed while working,” said Dave Mayers, another current Nieman fellow, in an interview after the gathering.

“It’s gotten increasingly dangerous for journalists in so many parts of the world to do their work,” Lipinski said in an interview. “They wanted to honor Brent, but also make this larger point about the importance of journalism and the dangers of practicing it in this moment.”

Samantha Henry, Nieman Foundation assistant director for programming, called Renaud’s death “a painful loss for the journalism family” and emphasized the legacy of his work.