‘Everything Everywhere All at Once’ Review: A Thrilling Roller-Coaster Ride through the Multiverse 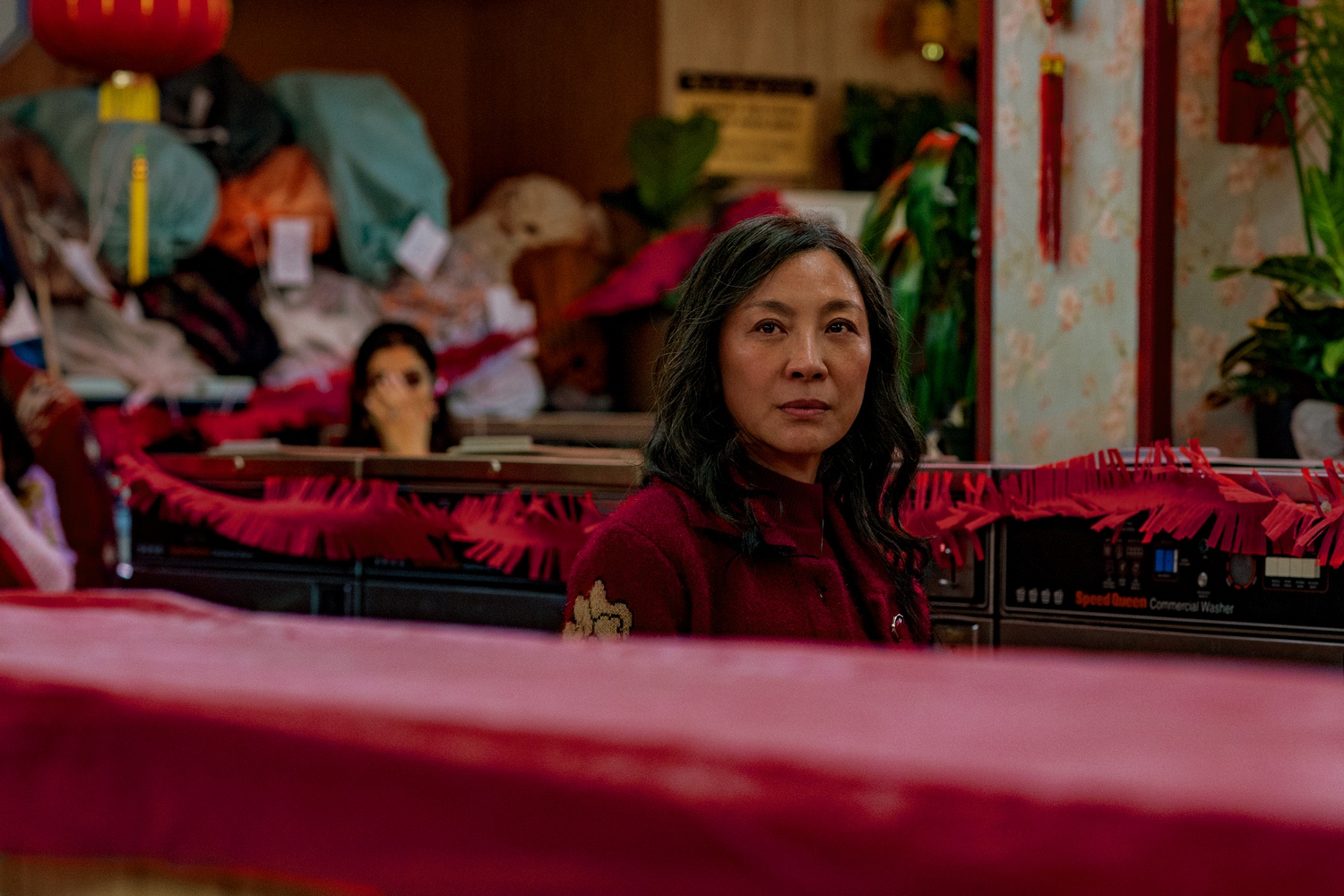 Michelle Yeoh stars as Evelyn Wang in the A24 film "Everything Everywhere All At Once." By Courtesy of A24
By Debby Das, Contributing Writer

If chaotic good was a movie, it’d be Daniel Kwan and Daniel Scheinert’s “Everything Everywhere All at Once.” Starring on-screen powerhouses Michelle Yeoh, Ke Huy Quan, and Jamie Lee Curtis, A24’s newest sci-fi action comedy depicts one woman’s epic adventure through the multiverse to save her daughter from an all-consuming everything bagel.

Produced in part by directors Anthony and Joseph Russo, known for their films set in the Marvel multiverse, “Everything Everywhere All at Once” combines the action-packed drama and grand proportions of modern superhero movies with the odd but surprisingly tender surreal comedy that the Daniels (as writer-director duo Kwan and Scheinert like to refer to themselves) have a knack for. Their 2016 film “Swiss Army Man” features Daniel Radcliffe as an overly-flatulent corpse, and their newest title continues in the duo’s tradition of offbeat comedy.

The film opens with chaos: Evelyn Wang (Michelle Yeoh), an overwhelmed matriarch who runs a laundromat with her sweet, even-tempered husband Waymond (Ke Huy Quan), is arranging a Chinese New Year Party for her customers on the same day that the laundromat gets audited by the IRS. Adding an extra load to Evelyn’s overfilled washer — it had to be done — Evelyn’s demanding and traditional father Gong Gong (James Hong) arrives from China, and her daughter Joy (Stephanie Hsu) wants to introduce her girlfriend to him at the party.

During an IRS meeting with the formidably eerie bureaucrat Deirde (Jamie Lee Curtis), Evelyn is initiated into the rules of the multiverse by an alternate reality version of her husband, who urges Evelyn to help defeat the powerful but unstable Jobu Tupaki, creator of a black-hole bagel capable of destroying the multiverse. And so the adventure begins for both Evelyn and the audience in a storyline whose strands are as complex and manifold as the number of alternate realities in the movie. Suffice to say, the Daniels’ multiverse is crazy in a way that only the creators of a sentient flatulent corpse could come up with. It parodies “Ratatouille” in a live-action raccoon version imagined by Evelyn, reverently imitating scenes from Wong Kar-wai’s “In the Mood for Love.” It features worlds where everyone has hot dogs for fingers, and where Evelyn and her daughter Joy are mute stones in a canyon speaking to each other via Times New Roman typescript.

In all respects, the movie lives up to the expectations set by its title. It seems as if every department in the production team was directed to operate with maximalist sensibility. Replete with frenetic cinematography, smartly and comedically choreographed fight scenes, jam-packed set design, and kooky, referential costumes, all of the film’s visual components converge into a dizzying but sensational kaleidoscope that threatens to overstimulate the senses in the best way possible. Son Lux, an American experimental band, is the perfect choice to compose the film’s jarringly primal soundtrack. Watching and listening to “Everything Everywhere All at Once” is the closest a viewer might get to being a kid in Willy Wonka’s candy shop.

Michelle Yeoh gives an unsurprisingly dynamic performance as a smartly comedic, realistically hassled, and ultimately loving maternal protagonist. Stephanie Hsu nails both the resigned helplessness of depressed Joy and the terrifying despair of nihilistic Jobu Tupaki. Quan’s Waymond is remarkably resonant despite his character’s tendency to be used as the “Be kind” hippie messenger for the more pessimistic female figures in his life. And let’s not forget the multiverse, which is just as much a character in the movie as its inhabitants. What the Daniels uniquely succeed in doing in their latest film is portraying both the colorful wonders and dismal betrayals of their multiverse. If every decision is a viable possibility manifested by the infinite number of alternate realities, then why does any decision matter? The movie astutely reminds the audience that Jobu Tupaki’s destructive nihilism is just as much a product of the multiverse as the (intentionally misspelled) “Racacouille.”

Distill the movie into its purest element, however, and what the audience gets is a very simple, tender family drama. The film’s genius lies in its ability to track one woman’s sense of individual loss — of her dreams, her ambitions, her self — as it morphs into an exploration of her relationships with her family members. The film begins as an exciting, lone-ranger/chosen-one journey in which Evelyn gets to fulfill her what-if fantasies in alternate realities. It transforms, albeit a tad too slowly, into her reckoning with the fact that the very people who ground her in the tedium of her dismal reality at the laundromat are the ones who enable her fantastical journey through the multiverse. The movie is Evelyn’s psyche visualized, dyed in a million brilliant colors and placed in a million brilliant sets, and it is a truly beautiful moment when her psyche ends up back at the place it started: with Joy and Waymond in the parking lot of their laundromat. The touching end of the rollercoaster ride that is “Everything Everywhere All at Once” persuades viewers that being on the ground isn’t so bad after all.