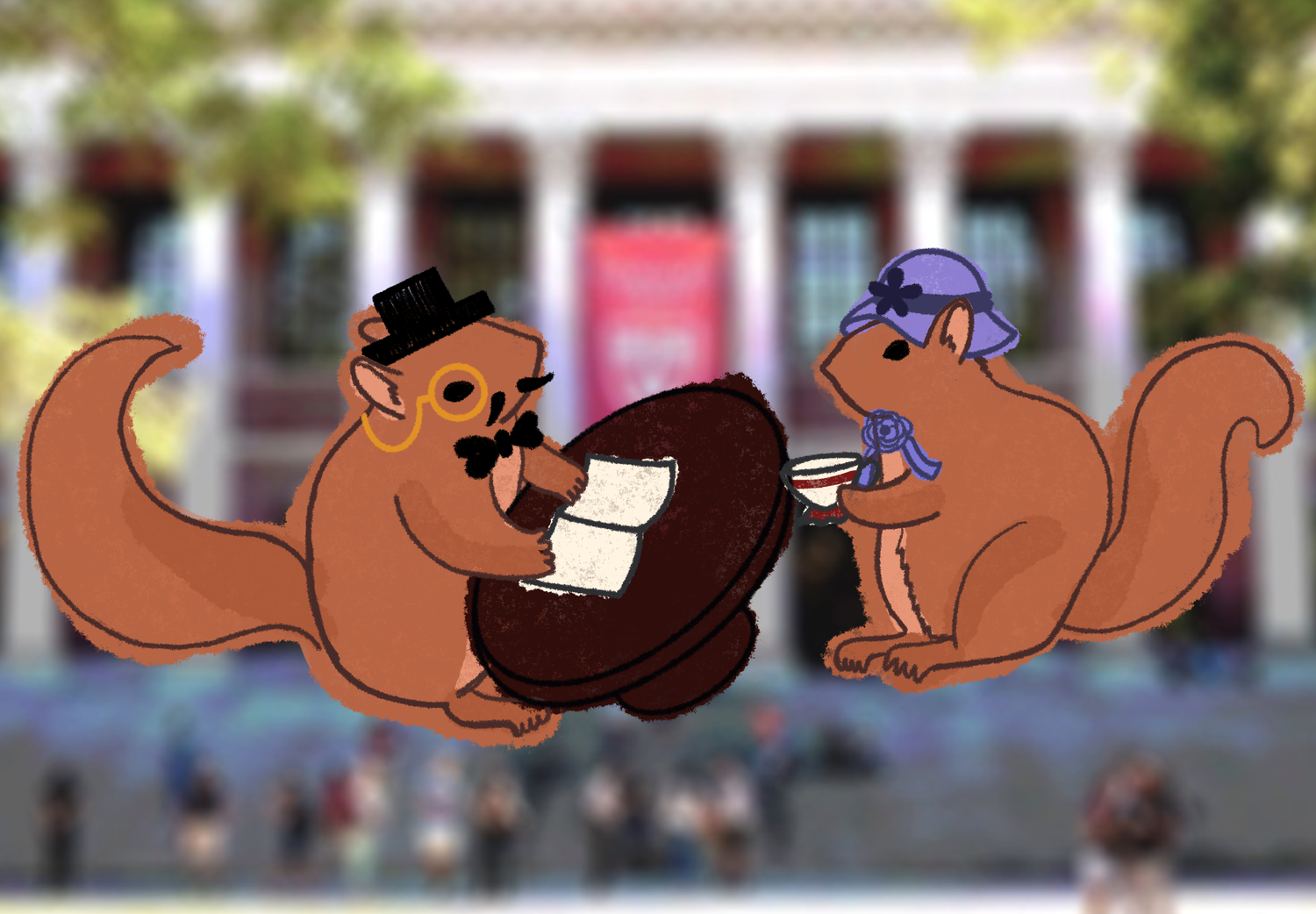 The squirrels on Harvard’s campus work tirelessly to achieve quite literally groundbreaking discoveries in the field of acorn-stashing and to innovate new styles of nest architecture.
By Sierra A. Lloyd

What does it take to be a Harvard squirrel, you ask? In this day and age, only squirrels with the highest degree of adorability and the most prodigious of nut-cracking capabilities are considered adequate. Think of the squirrels in the Nut Sorting Room of Willy Wonka’s chocolate factory, only smarter. (Little-known fact: several Harvard squirrel alumni were cast in the 2005 remake of “Charlie and the Chocolate Factory.”)

The squirrels on Harvard’s campus work tirelessly to achieve quite literally groundbreaking discoveries in the field of acorn-stashing and to innovate new styles of nest architecture. High on the squirrels’ priority list at present: improving the efficiency of seasonal nut-cashing through both engineering and squirrel neuroscience. A pressing issue, seeing as the larger squirrel population loses up to 75 percent of the nuts it buries.

Harvard squirrels themselves are not immune to such disorienting food loss. One Harvard property maintenance worker (who requested anonymity due to how hard the squirrels could make his job if provoked) reported finding 992 nuts one spring work day, uncovered as he tilled the soil in front of Sever Hall. Upon hearing this, a young skin-and-bones squirrel I talked to became so anguished he fell out of his tree. His emotional state left him unreceptive to my attempts to introduce him to a map or catalog system which could prevent future unnecessary hunger. I’ll have to try again next year.

Many people think that once a squirrel has made it to Harvard, it’s set. Unlimited access to snack-bearing tourists and enough acorn-bearing trees to keep it fed for the rest of its squirrelly life. But reality is more complicated. Food from tourists has been known to make Harvard squirrels fat, which is hardly ideal when their lifestyle involves jumping from sprig to sprig 40 feet in the air. Also, the Harvard archeology department has a habit of digging giant holes in the Yard, unburying up to 50 acorns per excavation — a three-week setback, at least.

There has been criticism in recent years of Harvard squirrel admissions being primarily a question of legacy — usually, once at Harvard, squirrels stick around and send their children to follow them. Some parents have even been accused of grooming their kits from birth for prestigious positions in the squirrel hierarchy on campus. The overwhelming pressure frequently causes adolescent squirrels to crack like a nut.

Taking the feedback around their admissions policy into account, the Harvard squirrels have implemented a rule mandating that 25 percent of new admits must be from the wider Massachusetts area. Sometimes a squirrel will even join from abroad, having stowed away on a Christmas tree shipped in from Nova Scotia.

As spring comes to a head, Harvard squirrels are preparing for the height of mating season. Over Sex Weekend, tiny pamphlets encouraging safe sex practices were posted in the upper treetops for the STI-ridden and overly eager juvenile population.

When the students leave in May, squirrels’ reign will be uncontested. Until then, Harvard squirrel leadership has one emphatic request for the humans on campus: please stop walking dogs through Harvard Yard, lest they be forced to put their sharp squirrel minds toward less peaceful endeavors.