‘The Just and the Blind’ Review: A Display of Art as Resistance 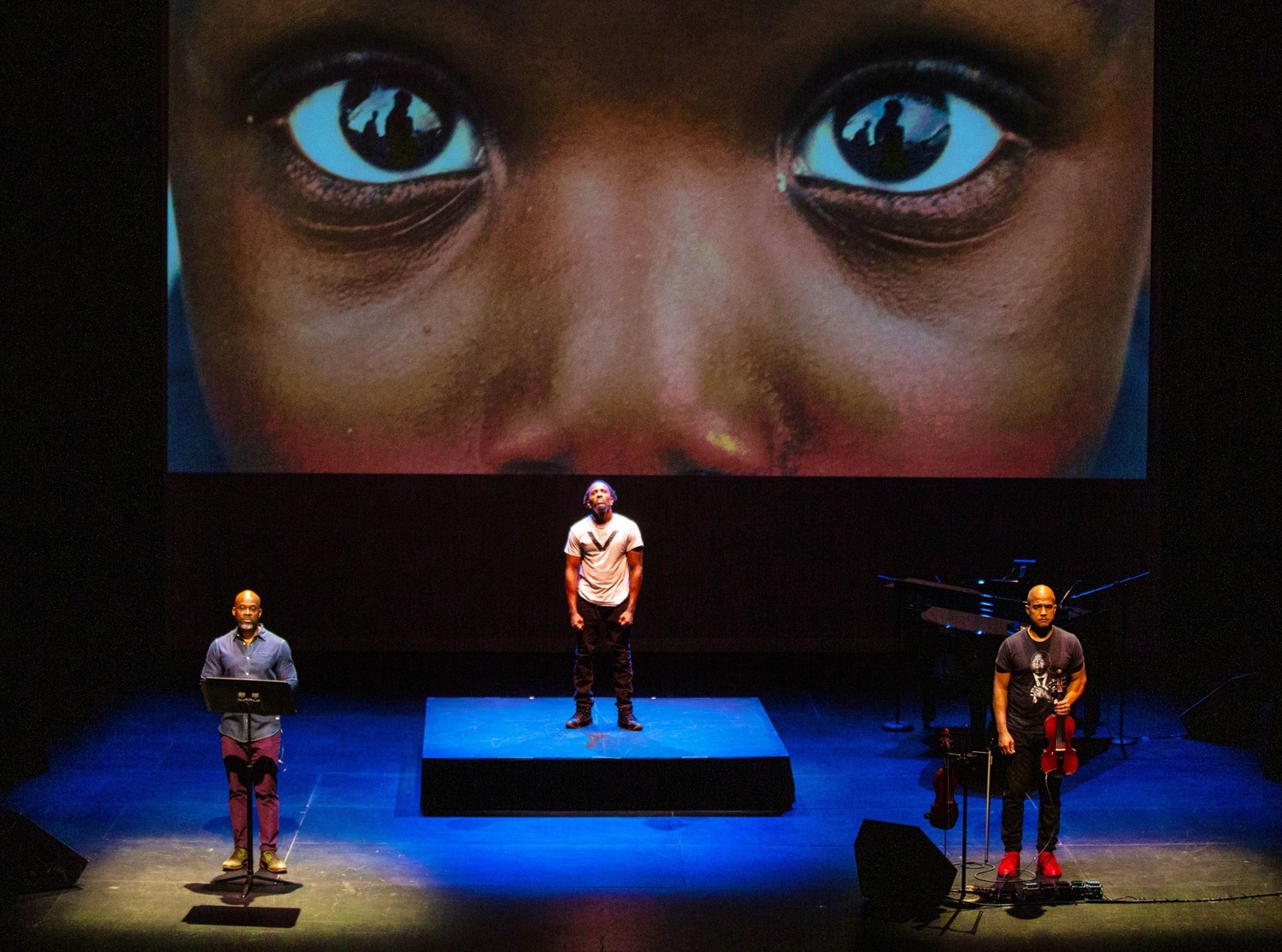 From left to right, Marc Bamuthi Joseph, KingHavoc, and Daniel Bernard Roumain in Celebrity Series of Boston's production of "The Just and the Blind." By Courtesy of Robert Torres
By Julia J. Hynek, Contributing Writer

“Love is contraband in Hell, cause love is an acid that eats away bars.”

These words — written by civil rights activist and Black Panther Assata Shakur — are manifest in every aspect of “The Just and the Blind.” The evening-length multimedia performance, which premiered on April 1, is composed of a series of vignettes that are linked by themes of mass incarceration, police brutality, and systemic racism.

Shakur’s words remind us that throughout the history of Black subjugation and oppression, the ability of love to persevere within communities was an act of resistance, and the fostering of something beautiful against all odds. “The Just and the Blind,” too, unapologetically showcases love despite its themes of extreme marginalization: the love of the artists for each other and their craft; a love for family, Black sons, and community; and a love for the possibilities of the future. Innovative, artistically brilliant, and powerfully urgent, “The Just and the Blind” is a deeply moving performance that provokes thought and emotion far past its conclusion.

Any discussion of the show would be remiss without discussing the array of media it so thoughtfully employs. Linked by common themes of mass incarceration, police brutality, and systemic racism, “The Just and the Blind” synthesizes four main artistic components: spoken word poetry, dance, singing, and instrumentals. Against a backdrop of visuals from animator Xia Gordon and photography from Oakland-based photographer Brittsense, each live element has something unique and necessary to add.

It is difficult to imagine the performance without spoken word artist and poet Marc Bamuthi Joseph’s lyricism. His poetry drives the show forward, including anecdotes from various stages of the speaker’s life. And while Joseph’s text is stellar on its own, his articulate and deliberate delivery elevates the influence of his words. Speaking with a deep voice that rings through the hall, Joseph is able to channel every one of the speaker’s states of being through to the audience. Through pain, hope, anger, and fear, Joseph’s poetic rhythms carry listeners along the highs and lows of the narrator’s emotions and life experiences.

Joseph’s speech is complemented by the instrumentals of composer and musician Daniel Bernard Roumain, primarily on piano and electric violin. Roumain’s inventive soundtrack of melodies ranges from calmly contemplative to hauntingly shrill. Roumain also displays a flair for the unconventional, occasionally playing his violin like a ukulele (while the bow is held between his teeth) and using a synthesizer to create a reverb effect. Pushing the boundaries of tradition, Roumain’s musical contributions are refreshing, creative, and suited for the evocative themes of the show.

The performance is also interspersed with the captivating dance performances of KingHavoc, a Brooklyn native who for nearly 10 years has been one of the key players in establishing Flexing — a style fusing elements of dancehall, reggae, and hip-hop — as an art form. KingHavoc delivers a showcase of extraordinary physicality and rhythm that pays no heed to the rules of anatomy and physics, maneuvering a complex series of floor moves, hopping on and off the central platform, and effortlessly assuming gravity-defying positions. His rhythmic contortions are at once deliberate and sharp but also fluid and free, and when combined with Roumain’s musical backing and Joseph’s storytelling, they bring a focus to the physical body with them. KingHavoc’s dancing represents the many dimensions of the Black body, expressing stories of strength and vulnerability, innocence and criminalization, and confinement and freedom.

Last but certainly not least in the performance are the two songs performed by Boston-based vocalist and Grammy nominee Débo Ray. The pieces were both letters from prison — one from Assata Shakur, the other from Martin Luther King Jr. — adapted into song through melodies composed by Roumain. Ray delivers both pieces with gripping emotion, showcasing her gorgeous, rich tone and her impressive range; she takes full command of the ringing highs, the resonant lows, and everything in between. In these performances, viewers are reminded once again why music and song have been so key to Black culture and resistance for centuries.

The talent present across the four artists cannot be overstated. “The Just and the Blind” achieves a careful balance between allowing each performer to shine solo and combining two or three forms at a time. Thanks to this, viewers can enjoy each artist’s skills individually, but also appreciate what unfolds when they are so masterfully united.

Most of all, “The Just and the Blind” creates a moving, nuanced portrait of the Black experience in America. From the lighthearted tale of Joseph’s narrator getting caught smoking weed in Senegal to his discussions of Black criminality and cycles of incarceration, the performance is a timely piece perfectly situated within modern contexts of racial reckoning in America.

Furthermore, it reminds us that art is not marginal, but rather central to, resistance against all forms of oppression. It is a way of processing emotions and experiences as much as it is a way of building solidarity and creating beautiful things among pain and fear and marginality. A true labor of love from all those involved, “The Just and the Blind” achieves all of these things and more, leaving a lasting artistic and thematic impression on anyone who had the honor to watch.