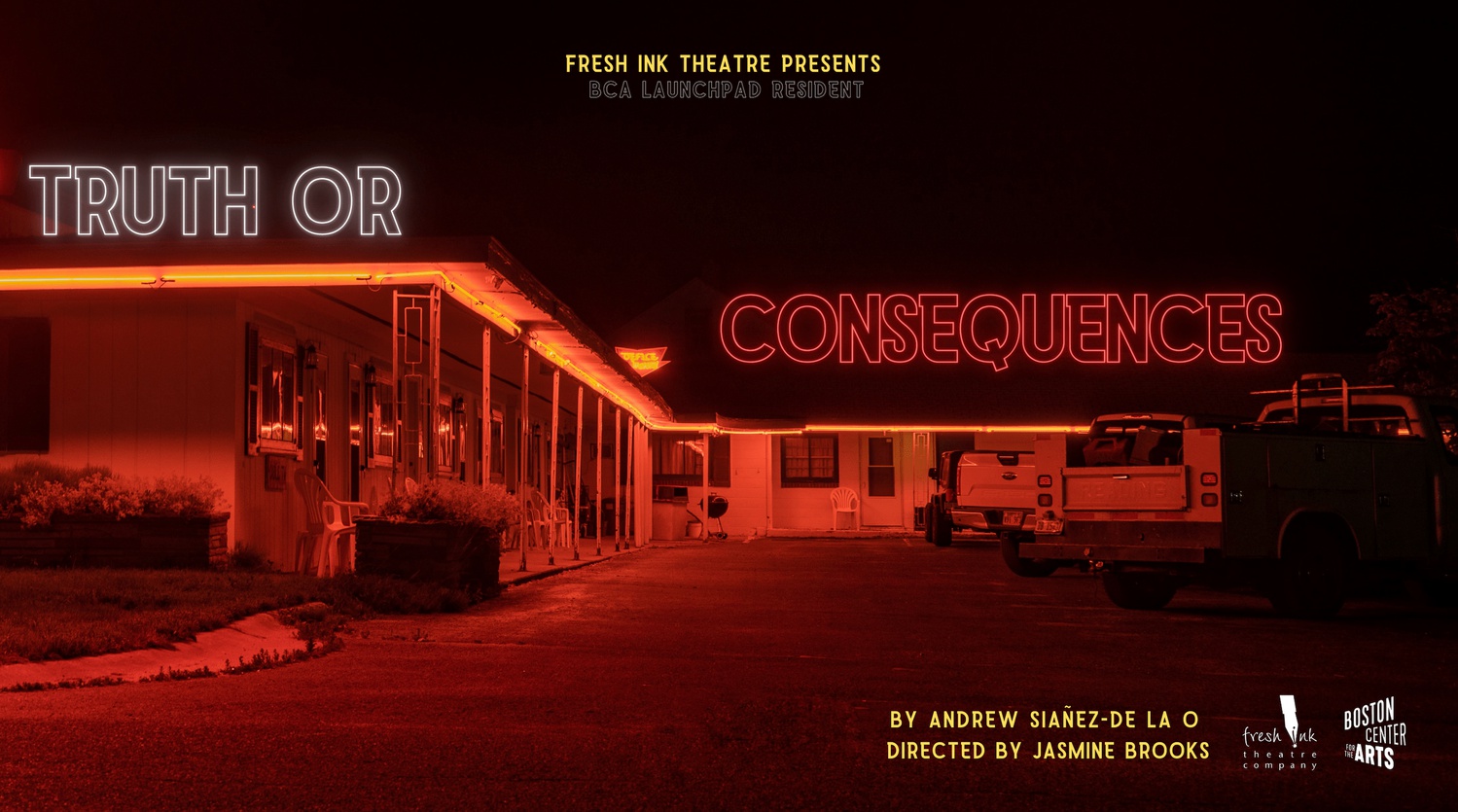 "Truth or Consequences" runs from April 30 through May 14 at BCA Plaza Theatres. By Fresh Ink Theatre
By Kieran J. Farrell, Contributing Writer

“I really wanted to approach this as a love letter to ‘X-Files.’ It’s two agents from some secretive government who find themselves in a motel room, and they find out the motel room is carnivorous and is planning on eating them.”

At a virtual event on Thursday, April 14, Siañez-De La O and his colleagues at Fresh Ink Theatre discussed their production, “Truth or Consequences.” Siañez-De La O was joined in conversation by Louise Hamill, Fresh Ink’s Artistic Director, as well as Jasmine Brooks, the Director of “Truth or Consequences.” The event, hosted by the Boston Center for the Arts, was part of a series of lunchtime talks the organization holds with its resident artists, including Fresh Ink Theatre.

True to its name, Fresh Ink Theatre is relatively fresh on the scene in Boston. And though the 11-year-old Fresh Ink may not be the largest theater company out there, Hamill believes that there are big benefits to being small.

“We’re working under a very small budget and a small capacity,” she said, “but therefore creating super cool work because we don’t have to deal with people that might put constraints on our work. And [we] can then truly make it as creative and expansive as possible.”

In keeping with Hamill’s description, Fresh Ink embraces such creativity in its production of “Truth or Consequences.”

“It’s not what it seems like it’s going to be,” said Brooks. “Though it is sci-fi, I feel like it’s using sci-fi elements to highlight toxic work environments, racism, colonialism, gentrification… There are so many topics that are being exploded (sic) by these sci-fi elements. It’s been such a joy to watch it grow.”

When Brooks talks about the play’s growth, she really means it. Siañez-De La O said the script for “Truth or Consequences” has taken on three different endings throughout the course of its development. It is specifically this type of malleability, though, that he believes has contributed so much to the crew’s connection with the story.

“Every single time we approached this with a new cast, with a new workshop, we’ve discovered so much about this world,” he said. “[The play] has become so expansive in what it’s trying to combat.”

The process of writing new pages for the script continued until unexpectedly late points in production; even then, opportunities to enrich the play presented themselves. The result of this relentless effort has definitely turned some heads, attracting nationwide recognition even before the premiere.

The members of Fresh Ink live for “things like this” — plays that, beyond telling important stories, push the crew into uncomfortable territory. Such a reality particularly shines through in Brooks’ experience with “Truth or Consequences.”

Ultimately, regardless of how powerful a given story might be, its true power lies in sharing it with others.

“It’s all because someone down the road read the script and passed it on,” Siañez-De La O said, referring to the conversations he had about possibly bringing the play to other places. “So much of playwriting success is people saying, ‘I read it, I loved it, I shared it.’”

Siañez-De La O and the team at Fresh Ink hope that once “Truth or Consequences” opens, people will indeed read it, love it, and share it. That is, if they aren’t devoured by a sentient motel room in the meantime.