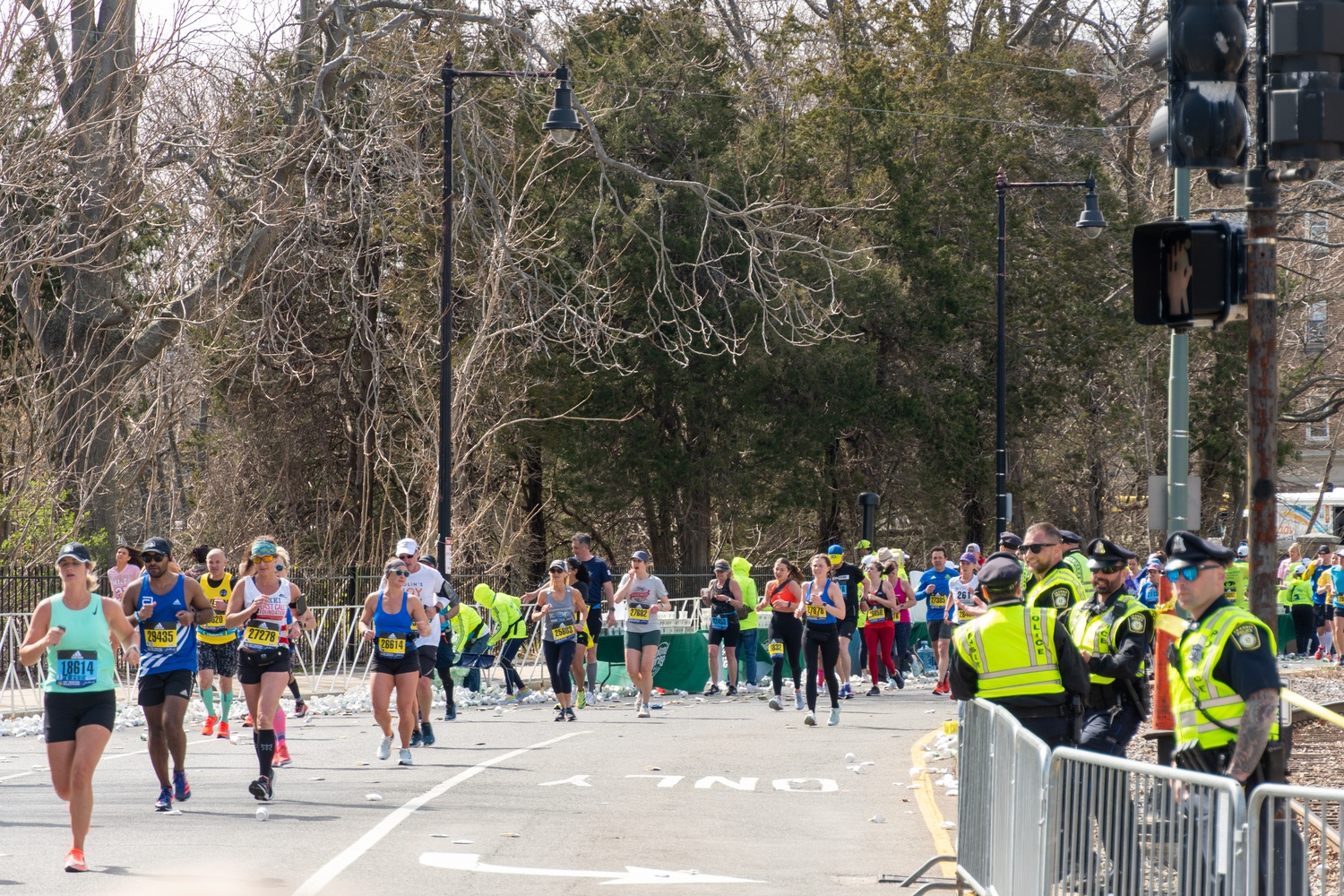 Tens of thousands of athletes raced in the 126th Boston Marathon on Monday, including more than a dozen Harvard affiliates. By Zing Gee
By Vivian Zhao

More than a dozen Harvard affiliates ran the 126th Boston Marathon on Monday, joining the 30,000 other athletes who raced the city’s iconic 26.2-mile course in front of hundreds of thousands of cheering spectators.

The event is the oldest annually run marathon in the world — and one of the toughest to qualify for, requiring a qualifying time this year of 3 hours for men aged 18-34 and 3:30 for women in the same category. However, individuals running for specific charities are allowed to participate without meeting the threshold.

“The crowd was just incredible, and I was just feeding off the energy of everyone along the way,” said Yao Yin ’23, who ran on Monday.

Though Harvard holds class as normal on Patriots Day, most other Boston area schools take the day off, allowing college students to line the course, which snakes from the town of Hopkinton to Boylston St. in Boston.

“It was a once-in-a-lifetime experience,” Yin said. “It’s like the whole city went out and dartied all day.”

Yin was one of five Harvard affiliates who ran the marathon with the Harvard College Marathon Challenge, which has raised over $832,000 for charity since its founding in 2005. This year, HCMC runners collectively raised $18,000 to benefit Harvard’s Phillips Brooks House Association.

“We were surrounded by other people as we were running that were also running for other charities,” Cote said. “It’s just really empowering to see what people will do for other people that they love or causes they support.”

Williams said Monday was “the best day of my life.”

“I feel more connected with my network now after asking for support and seeing who comes through for you,” Williams said.

Kaya L. Lolar ’25 ran alongside her mom and grandfather while being filmed for a Boston Museum of Science documentary.

“They wanted this multi-generational team of runners to be able to run so they can document our experience,” Lolar said.

“My grandfather used to run tons of marathons and he was kind of going for speed, but my mom and I were there more for the experience,” she added.

Other students ran for organizations including the Travis Roy Foundation, the American Red Cross, and the Boston Athletics Association.

Monday marked the first time since 2019 that the marathon was held on Patriots Day, as is tradition. The race was canceled in 2020 and held late in October in 2021 due to high case rates.

Elysia W. Li ’22, who ran with the Marathon Challenge, participated in the race less than two weeks after contracting Covid.

“Coming out of Covid, I was very aware of not pushing past my limit. I just took the first part very slowly,” she said.

Michael Z. Chen ’23 said the pandemic helped motivate him to run the marathon.

“Covid makes you realize that time is short, and you shouldn’t push off your goals until you are ‘ready,’ because no one is ever really ready to run a marathon,” Chen said.

Rachel L. Greenwood ’22 ran the race for Travis Roy Foundation — named after the Boston University hockey player who was paralyzed during a game at age 19. Roy died in October 2020.

“I still remember the pain of the last five miles,” Greenwood said. “But then I also know that, overall, it was such an incredible day that I would 100 percent do it again.”

—Staff writer Vivian Zhao can be reached at vivian.zhao@thecrimson.com