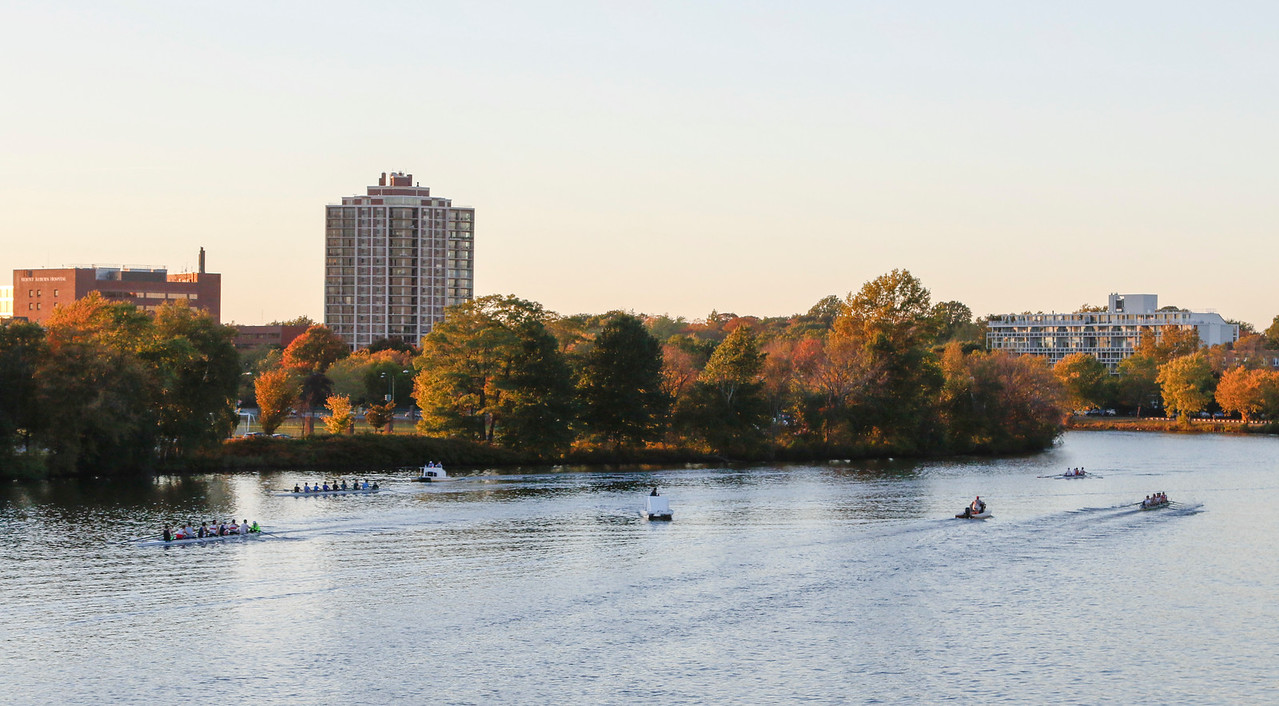 Harvard affiliates participated in an effort to clean up the Charles River on Friday morning. By Timothy R. O'Meara
By Christie K. Choi and Carrie Hsu, Crimson Staff Writers

Seeking to raise awareness about Harvard’s sustainability efforts, schools and programs across the University have hosted events since Thursday celebrating Earth Day.

The activities, which will continue through the end of the month, range from panels with Harvard affiliates working in climate and sustainability to a clean-up of the Charles River and an Earth Day Festival.

On Thursday, the Harvard University Center for the Environment and the Office of the Vice Provost for Climate and Sustainability jointly hosted a virtual discussion between Harvard experts about challenges in confronting environmental issues.

“The people within our country and around the world who have done the least to create the problem with their greenhouse gas emissions are experiencing the most severe impacts,” Holdren said.

“We’re not on the right track as a society,” he said. “We need to do more, so that’s what Harvard is doing. We’re stepping up, and we’re going to ramp up our activities in climate across the board in terms of research, in terms of education, in terms of engagement and outreach.”

Early Friday morning, Harvard affiliates and their families gathered along the Charles River for a river clean-up run by a host of Harvard programs, including the Office for Sustainability, and the Charles River Conservancy.

Emily Flynn-Pesquera, a senior sustainability manager at the Harvard Kennedy School who helped organize the event, said volunteers picked up 50 bags of trash during the two hours. She described it as a “sobering experience.”

“We try to get Harvard to connect our longer-term sustainability goals with just more engagement activity outside in our neighborhood,” she said.

Harvard Art Museums staff member Stephen Deane, who participated in the clean-up, said he chose to take part because he wanted to “keep what’s left of the planet in good shape” for his children.

On Friday afternoon, crowds gathered at the Science Center Plaza for the College’s Earth Day Festival. Some of the activities included information tables from student organizations, an electronics recycling station run by the Harvard University Information Technology, and a “freecycle” station that allowed people to donate and take unwanted goods. An electric shuttle bus was also parked at the plaza to represent Harvard’s transition to alternative energy sources. 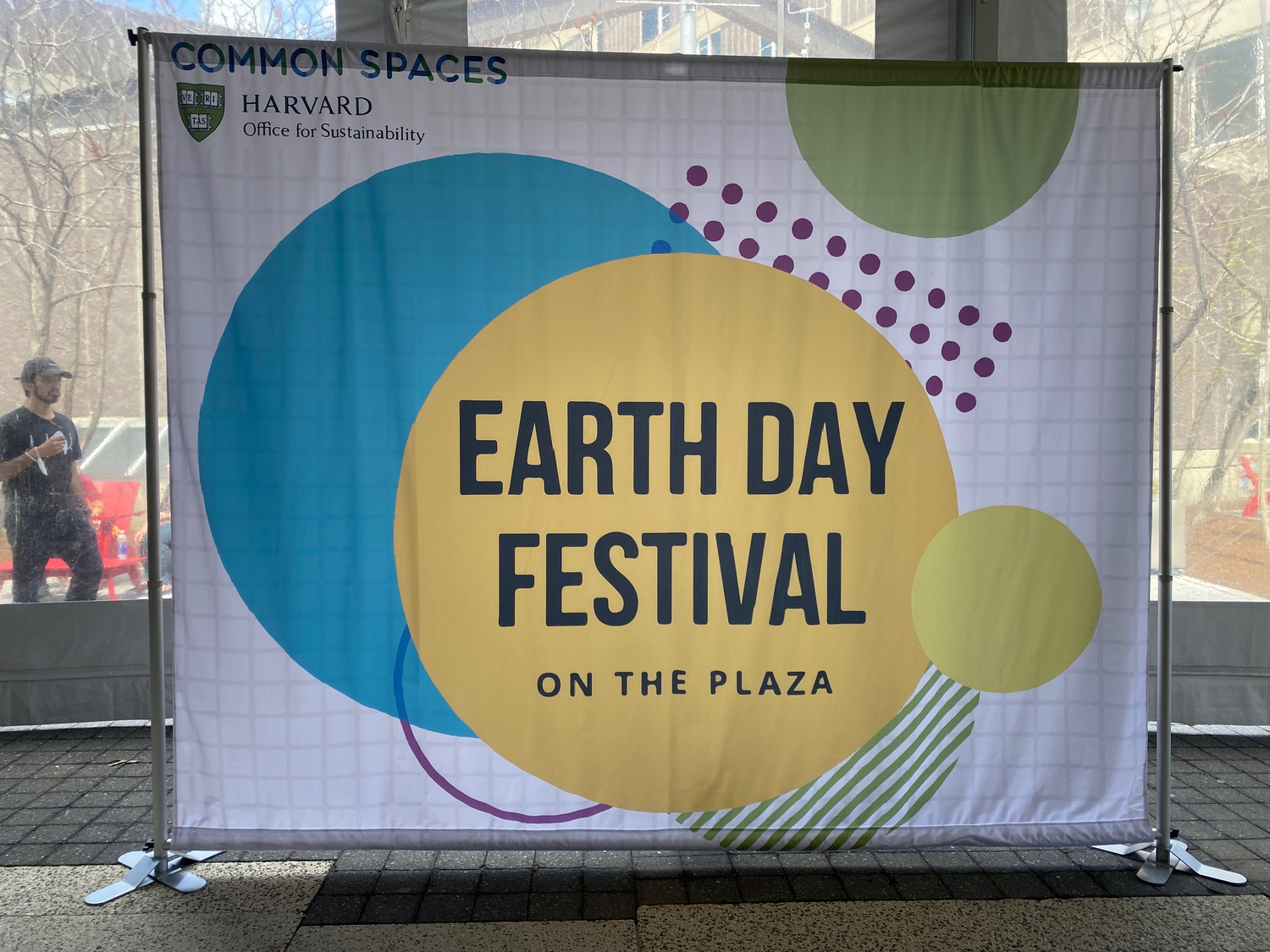 Guillaume A.P. Bouchard ’23-’24, a student coordinator at the Office for Sustainability’s Undergraduate Resource Efficiency Program who helped staff the festival, said they hoped the event would help Harvard affiliates reflect on the environment.

“I hope people can stop by and just pause to reflect on Earth Day one day a year to just celebrate our Mother Earth and think about the links between their own health, their own well-being, and the well-being of their communities and of marginalized communities,” they said.

Michael H. Xie ’22, another festival participant, hosted trivia about sustainability and medicine on behalf of the Green Medicine Initiative — a College student organization that promotes sustainability within medicine.

Xie said that in addition to preparing trivia questions, club members also drafted an email for students to send to their lab managers encouraging them to promote sustainable practices in their labs.

Anisa V. Prasad ’23, who staffed a table for the Harvard College Conservation Society, said that though the turnout at the event was high, it was “just one day.”

Prasad added that not a lot of students are aware of conservation projects they could participate in, and the available projects are all student-organized.

“​​I would like to see [Harvard] do more and organize more,” Prasad said. “We had at the beginning of my freshman year — I don’t know if they had it this year — Day of Service. We could definitely do something like that for the environment, and we just don’t.”

Harvard Undergraduate Clean Energy Group board member Emma T. Zuckerman ’24, who ran a table for the organization, said that while she appreciated how “Harvard has definitely been trying,” the University should do more for the environment.

“There’s still more that can be done, especially with divestment from fossil fuels. They announced divestment, but they still haven’t fully divested yet, and that’s something that needs to be done,” she said.

“I’m happy that Harvard is hosting this event, and I hope that they can host more similar events in the future,” she added.

—Staff Writer Carrie Hsu can be reached at carrie.hsu@thecrimson.com.