From Coachella: Still Woozy Brings About a Desert Hallucination 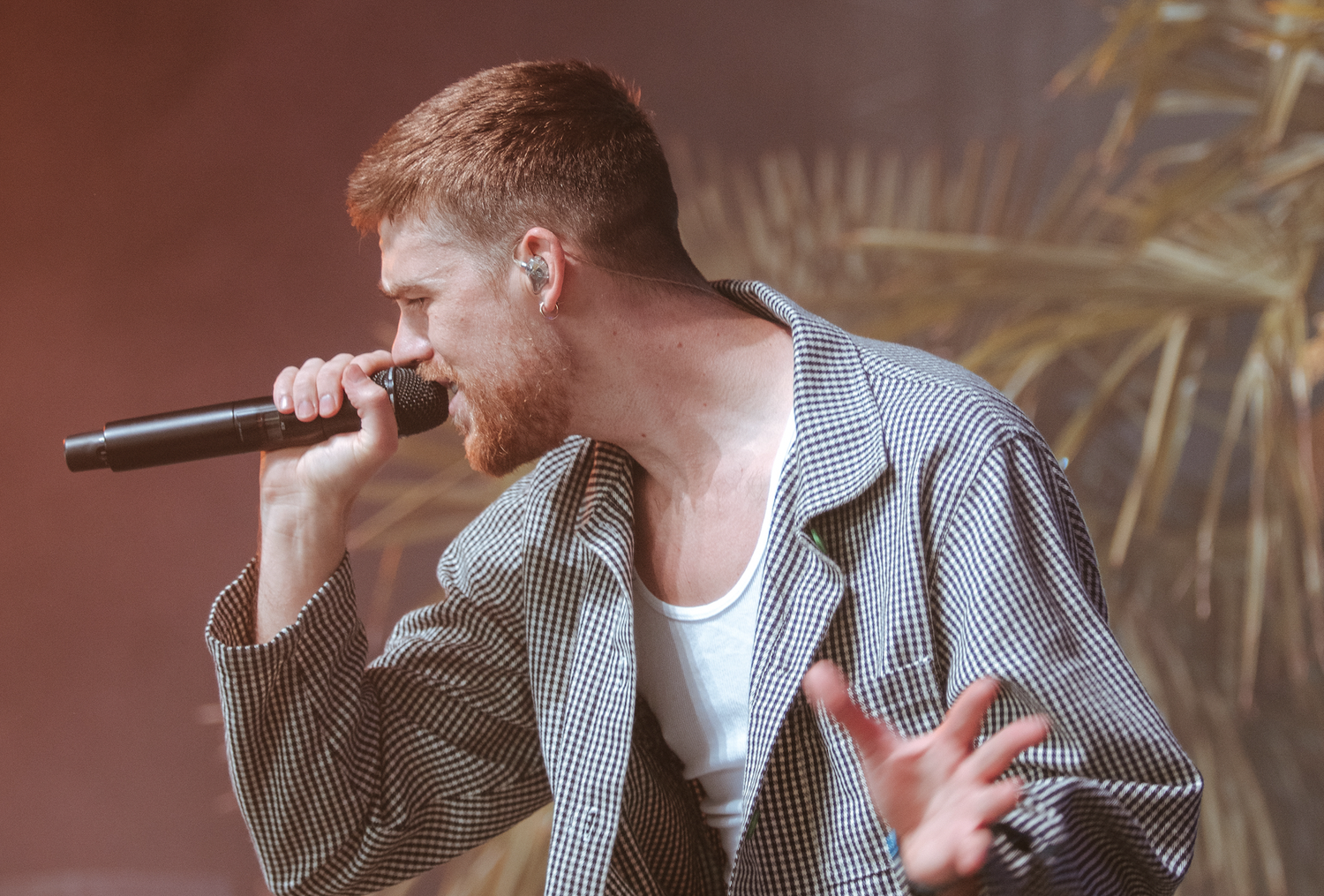 During the peak of Friday’s desert heat in California’s Coachella Valley, hundreds flooded to the Mojave stage — the second-largest of Coachella Music and Arts Festival’s shaded stages — to see indie artist Still Woozy take the spotlight.

The American singer-songwriter took the stage at 4:25 p.m., following soul artist Raveena. Starting with the first chord of the show — the guitar strum of “Window” — the crowd burst into applause.

Indeed, throughout all of “Window”, the audience response was electric: the tent echoed with the voices of the singer and his fans. Balloons suddenly appeared and bounced through the crowd like a surfer riding a wave.

With smoke curling into the air from every corner, the vibes of the performance was nothing if not groovy. Trippy visuals filled the giant LED screen, and the crowd swayed from side to side with the soft guitar strokes and Woozy’s silky vocals. The palm trees on stage converted the venue into a desert oasis.

Just when the groove couldn’t seem to get any nastier, Woozy asked the crowd, “Is it a good day for some funky-ass bass?” Bass guitarist Legwurk shifted to the center of the stage, his loud and infectious basslines carrying the show into “Lava.” The deeper, longer wavelengths reverberated throughout Mojave so that they could be felt in the bones and chest, creating a physical engagement with the audiovisual masterpiece. 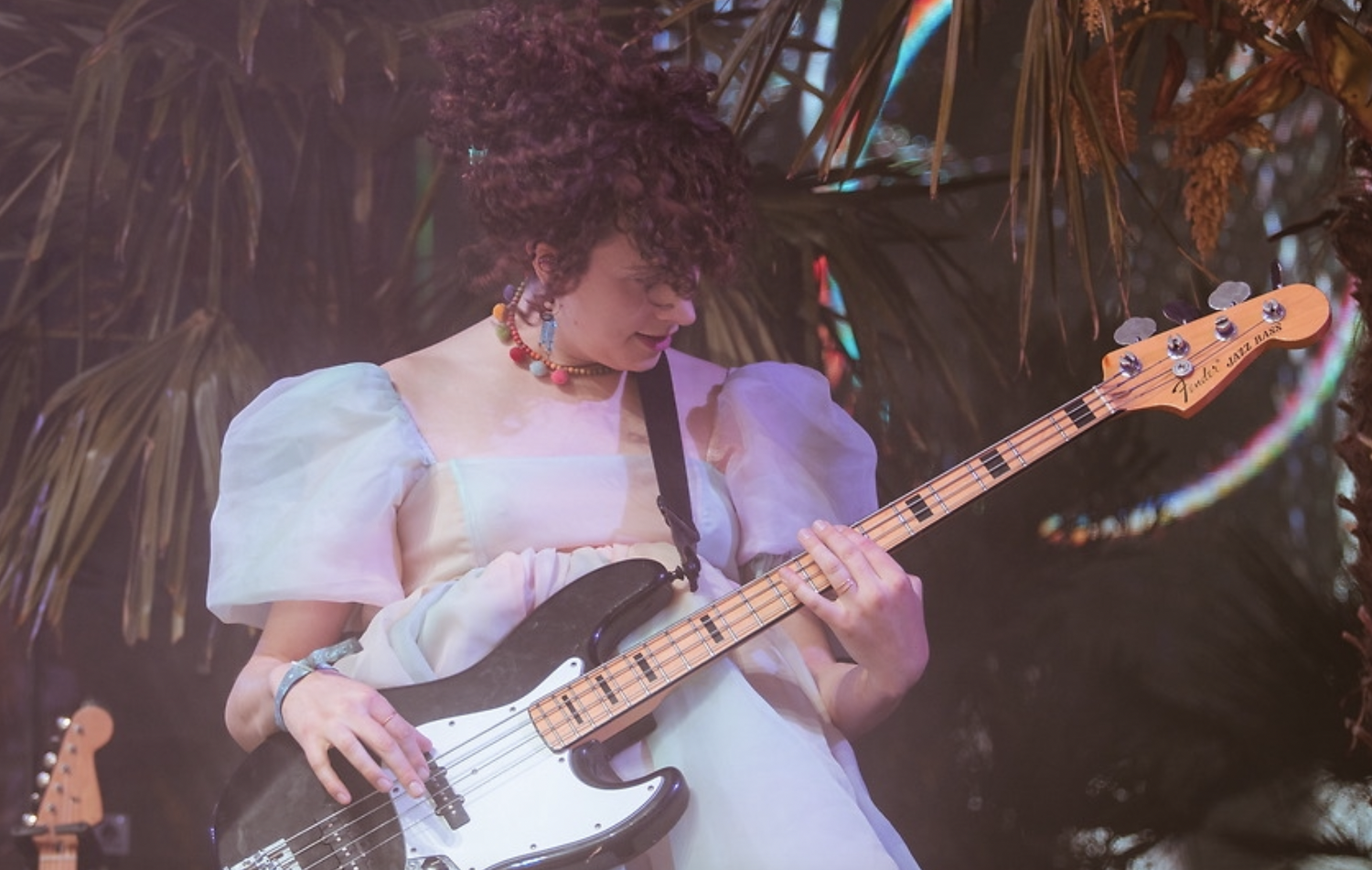 Woozy, Legwurk, and drummer Harry Terrell seemingly had one goal in mind: to have an incredible time as they showcased their prowess. Their stage presence was unashamedly goofy, as exemplified by their interpretative dance moves. Woozy flailed his limbs in unpredictable directions and swayed to the beat like a car dealership inflatable. Legwurk jumped and ran across the stage, at times hugging the palm trees and screaming into the microphone. In one instance, she awkwardly grinded on Terrell, to the sheer joy of the audience.

In between sets, Woozy and Legwurk simply encouraged the audience to have a good time, stay hydrated, and enjoy the presence of their best friends. Not taking themselves too seriously, they made candid and whimsical statements, which the audience absolutely loved. Legwurk approached the microphone and said, without any context, “Tall people are not the only sexy people. Short people are sexy, too…Shout out to my short people!”

Near the end of the set, Legwurk played the opening chords of “Habit” sans lyrics. They were replaced by an extended intro featuring blues guitar licks and soft drums. For about two minutes, the audience waited in anticipation for the opening lines as Legwurk improvised on the electric guitar. When Woozy finally came in with “I could let you have it,” the atmosphere, fans screamed the lyrics and swayed to the accented beats.

With the energy from “Habit” permeating the venue, Still Woozy closed with“Goodie Bag,” arguably one of the most-popular songs in his repertoire. Even louder than for “Habit,” the crowd sang along and reached a climax of energy and passion. The energy in the room was invigorating, yet chill at the same time. The laid-back music accompanied by the band’s incredible stage presence led to an undeniably joyful performance.

Following the immense stress of the first day of the festival and the peak heat of the day, Still Woozy provided the reprieve and rejuvenation needed to sustain a full day at Coachella. The band’s collective ability to effortlessly bring a diverse crowd of nearly one thousand people together for 45 minutes demonstrates not only the quality of their music, but also the power of their captivating and outright goofy charisma.

As the crowd walked back out into the beating sun, the stage was immediately stripped, and all signs of the performance vanished, as if it was all a mirage.