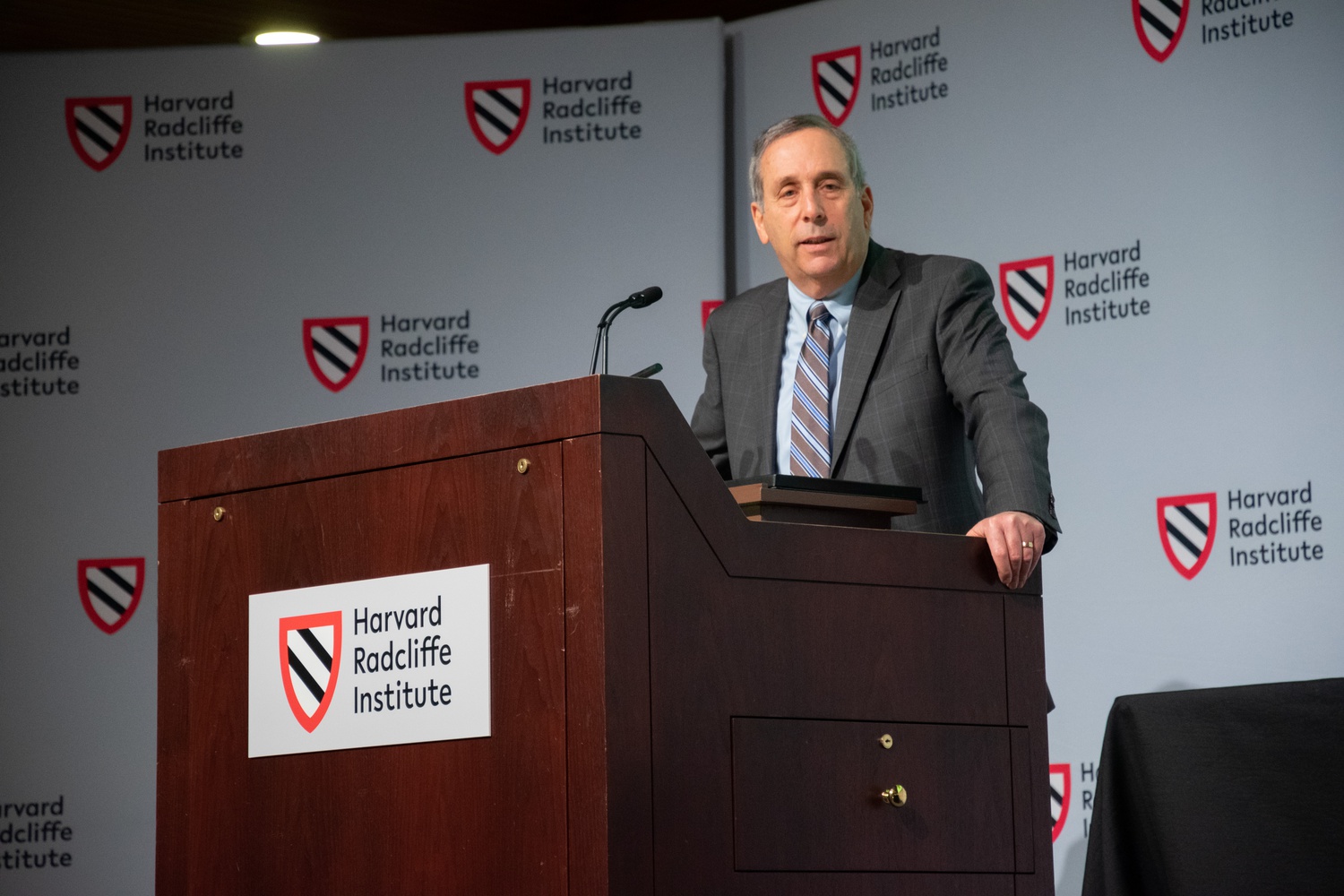 Harvard University President Lawrence S. Bacow spoke at a conference called “Telling the Truth about All This: Reckoning with Slavery and Its Legacies at Harvard and Beyond,” held at the Radcliffe Institute for Advanced Study on Friday. By Julian J. Giordano
By Caroline E. Curran and Sara Dahiya, Crimson Staff Writers

Following the release of a long-awaited report that detailed the “integral” role slavery played in shaping Harvard, University President Lawrence S. Bacow on Friday pledged to marshal the school’s resources to “repair the damage” caused by the legacy of slavery.

Bacow’s remarks came at a day-long event held at the Radcliffe Institute for Advanced Study that was dedicated to discussing a landmark University report released last week that detailed how slavery “powerfully shaped Harvard.”

Harvard has pledged to allocate $100 million to implement the recommendations of the report, which found that prominent University affiliates enslaved more than 70 people and that slavery was a key source of the school’s wealth across three centuries.

“The reality is that slavery played a significant role in our institutional history,” Bacow said. “That this truth has been obscured for so long should prompt our indignation — and it does — but, more importantly, it must also prompt our action.”

The event, entitled “Telling the Truth about All This: Reckoning with Slavery and Its Legacies at Harvard and Beyond,” featured addresses from Bacow, Harvard Provost Alan M. Garber ’76, Radcliffe Dean Tomiko Brown-Nagin, Prairie View A&M University President Ruth J. Simmons, and Boston University Center for Antiracist Research Director Ibram X. Kendi, among others. 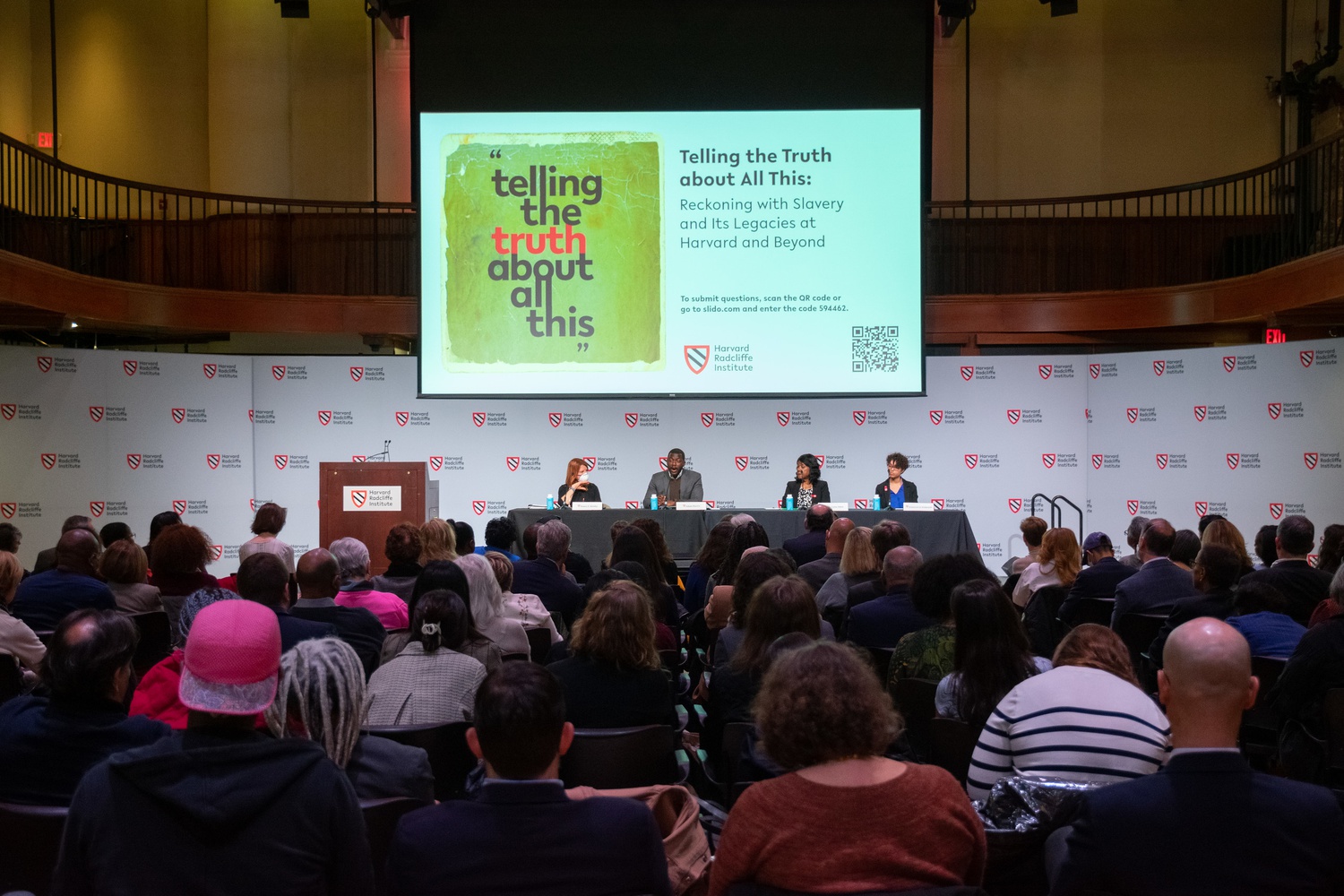 Panelists speak at a conference called “Telling the Truth about All This: Reckoning with Slavery and Its Legacies at Harvard and Beyond,” held at the Radcliffe Institute for Advanced Study on Friday. By Julian J. Giordano

Speakers at the event came discussed the report’s findings and its significance for higher education.

Brown-Nagin, who chaired the committee that produced the report, opened the conference by discussing the importance of understanding historical injustices in the present day.

“As I’ve often said over the course of Harvard’s reckoning with its legacies of slavery, we can’t dismantle what we cannot understand,” she said. “We can’t understand contemporary injustice unless we reckon with our history, and we’re doing just that at Harvard.” 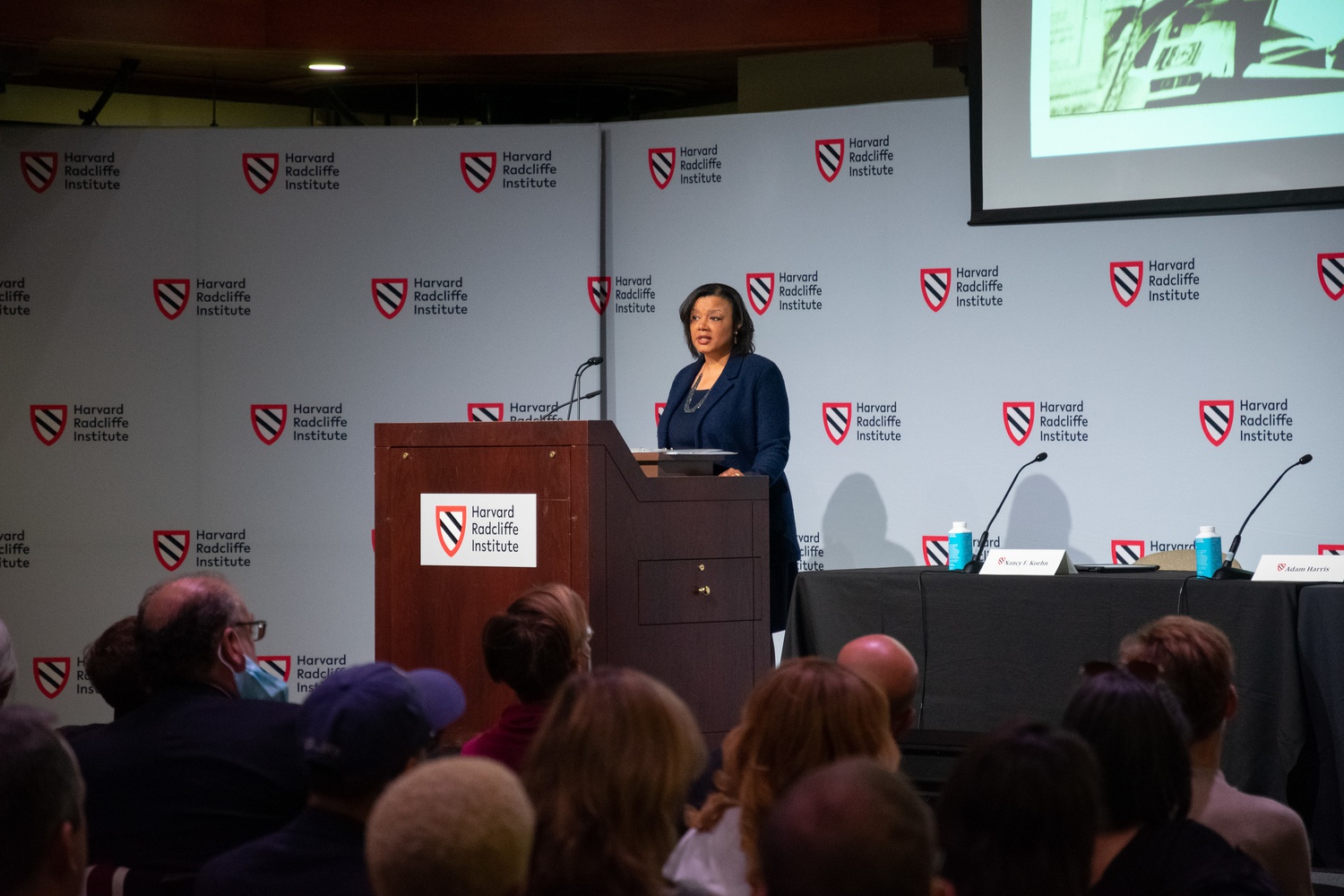 Radcliffe Dean Tomiko Brown-Nagin speaks at a conference about Harvard's legacy of slavery, held at the Radcliffe Institute for Advanced Study on Friday. By Julian J. Giordano

In his speech, Bacow, who formed the Presidential Committee on Harvard and the Legacy of Slavery in 2019, recognized the findings of the report and acknowledged that the University has overlooked negative aspects of its history in the past.

“I have to confess that I have been guilty of this myself at times,” he added, reflecting on his relationship with the history of Elmwood, the Harvard president’s residence, where enslaved people once worked.

While serving as president of Brown, Simmons established a committee that examined the school’s ties to slavery. Bacow said Friday that Simmons “really paved the path for many others,” adding: “I’m sorry that it took some of us as long as it has to follow the road.”

In her keynote address, Simmons discussed how her experiences as a Black woman in academia shaped her actions as a leader in higher education.

“For all the lies that surrounded me, I knew there were places dedicated to truth. And so my flight to academic life was really all about looking for that space, somewhere in the world, where the truth can be told,” Simmons said. “So we designed a process, to try to find out what the truth of it was, because nobody seemed to know. It was all hidden. It was erased from books completely.”