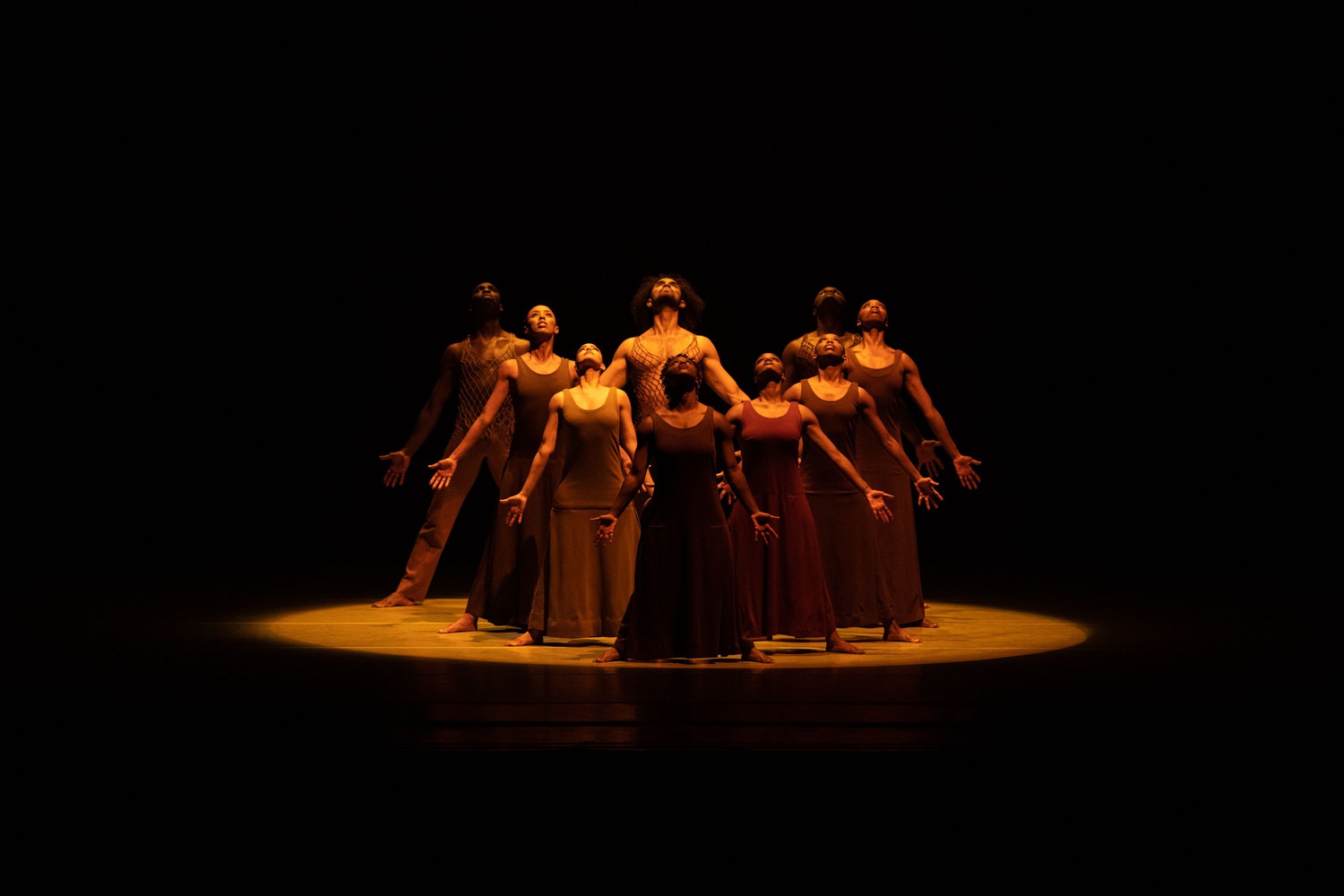 Dancers performing in "Revelations," the only piece featured in every one of Alvin Ailey's shows. By Courtesy of Robert Torres
By Nina M. Foster, Crimson Staff Writer

From Apr. 28 to May 1, the Alvin Ailey American Dance Theater performed in Boston for the first time since 2019. Over the course of their five-show run at the Boch Center’s Wang Theatre, the company showcased more than a dozen works, including returning favorites and Boston premieres. These shows marked the third and final part of Celebrity Series of Boston’s “The Movement Series,” a sequence of spring performances focused on uniting the American and diasporic Black experience. The Saturday matinee, which featured “Blues Suite,” “Pas de Duke,” “Reflections in D,” and “Revelations,” was not one to miss. The dancers were triumphant in their return to the stage, crafting a performance that was equally dynamic, technical, and enchanting.

Alvin Ailey’s choreography excels in its capacity for storytelling. In the first act, “Blues Suite,” the audience was invited to witness moments of tension and sweetness between lovers. Belén Indhira Pereyra and Michael Jackson, Jr. embraced sensuality as they danced to “Backwater Blues.” The pair showed that ailey’s dancers do far more than execute choreography — they must also act. They transitioned seamlessly between sharp movements to indicate conflict and smoother steps to convey that they had come to a resolution. The two dancers also demonstrated the need for strength in addition to artistry. Jackson, on his knees, repeatedly lifted Pereyra over his shoulder, each time evoking a cheer from the crowd that was louder than the last.

“Pas de Duke” was the cleanest and most captivating act of the afternoon. Jacquelin Harris and Chalvar Monteiro displayed incredible control, planting their feet after every turn before floating into poses like an arabesque en releve. The choreography was exciting in its diverse and incredibly challenging movements, emblematic of modern dance’s wide technical range. Monteiro mastered the difficult turning sequence in his solo, earning an ovation from the crowd after landing his final pirouette. Harris exhibited brilliant musicality in her solo, coordinating her movements with every beat of Duke Ellington’s jazz stylings. Her beautiful lines and fluid transitions captured the flirtatious nature of the choreography perfectly.

When Harris and Monteiro came together, their chemistry was undeniable, made stronger by perfectly synchronized movements, stunning lifts, and a playful high-five or “Charlie’s Angels” pose worked into the choreography. The audience witnessed the duo make a physically demanding performance look effortless and fun.

Christopher R. Wilson slowed things down for the third act — “Reflections in D” — bathed in a cool blue light as he danced to more Duke Ellington. Although the tempo of this piece was slower, that does not mean the choreography required any less skill or strength. Wilson’s performance was primed to leave viewers in awe of his power. Because he was donning only a pair of blue pants, Wilson’s musculature could be seen expanding and contracting as he flawlessly transitioned from one step to the next. And much like Harris, he showcased beautiful musicality, hitting every beat with movements that ranged from a sweeping change in position to a subtle tilt of the head.

The show culminated in Ailey’s beloved “Revelations.” While each of the five shows featured a different lineup of choreography, they all ended with the iconic piece — and for good reason. The only word that can sufficiently describe this work is ethereal. The audience cheered even before the curtain went up, greeted by dancers donning simple, earth-toned costumes. Moving gracefully with the gospel sounds of “I Been ‘Buked,” the dancers slid into crisp formations, landing in deep pliés and gracefully extending their arms in a smooth yet commanding manner. Ghrai DeVore-Stokes and Yannick Lebrun were simultaneously angelic and athletic as they danced to “Fix Me, Jesus,” supporting each other’s body weight in lifts made to look much easier than they actually were. For “Wade in the Water,” dancers’ movements were just as fluid as the long pieces of blue silk meant to mimic water behind them. Christopher Taylor, Christopher R. Wilson, and Kanji Segawa showcased athleticism in “Sinner Man” with ascendant jumps and countless turns.

The show ended on a celebratory tone with “Rocka My Soul in the Bosom of Abraham.” The choreography was simple but appeared impactful and impressive when performed by the entire company. Coupled with bright yellow costumes and cheerful music, this last dance was nothing short of euphoric. It comes as no surprise that the audience was moved to clap along with those onstage, swaying in their seats to the beat and smiling even under masks.

The Alvin Ailey American Dance Theater received a standing ovation at the end of their performance, and it was well-deserved — what a fantastic way to celebrate the company’s glorious return to Boston after a three-year hiatus.