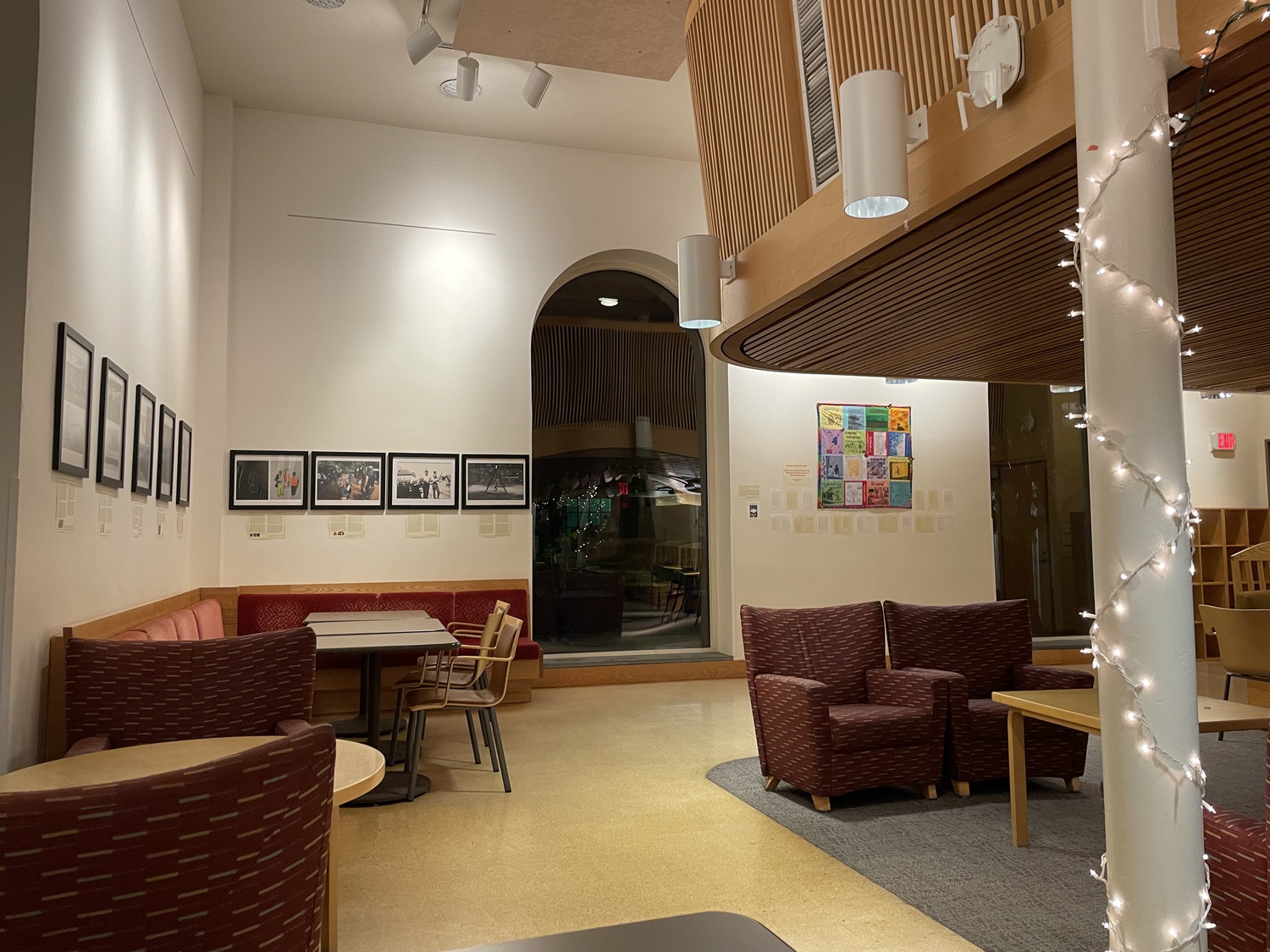 From journalistic snapshots of people crossing the U.S.-Mexico border to portraits of Syrian refugees’ life jackets afloat in Greek waters, visual representations of the migrant experience are varied in form and content — a lesson the students of Spanish 150: Migration and Border-Crossing in Film and Photography, taught this semester by Professor Raquel Vega-Durán, are quite familiar with. The class’s 16 students have created their own art exhibit on campus distilling broader course themes on borders and exploring diverse migration narratives, on display from April 25 through May 6.

Adorning the walls of Ticknor Lounge on the first floor of Boylston Hall, the exhibit consists of multiple projects. Alongside collages of works highlighting the migrant experience in five distinct mediums — animated films, narrative films, documentary films, children’s literature, and graphic novels — visitors can find selected examples of visual culture with captions written by the students. In addition, each student crafted their own physical representation of a concept pertinent to the exhibit, such as hope, vulnerability, and invisibility, which course head Vega-Durán compiled together into a quilt. The quilt is accompanied by poems selected from a text the students read for the course to expand on their individual concepts.

The exhibit attempts to parse through the perpetual “bombardment of images” we consume regarding migration, according to Vega-Durán, who chairs the Faculty Advisory Committee for Ethnicity, Migration, and Rights (EMR) — a secondary field Harvard offers.

“What is something that we have all the time? We’re exposed to visual culture all the time. I think people take for granted… all the different languages of visual culture,” said Vega-Durán. “You have to understand how to read images.”

While the exhibit was a collaborative effort between every member of the class, students were largely self-guided. Taking inspiration from the works of outside artists selected for the exhibit, which span photography, water color, and sculpture, among other mediums, students used both drawings and digital art to create their quilt squares.

“Everyone has such different ideas, such different experiences, such different visual narratives they want to convey with their specific word,” said Maria V. Kaltchenko ’23, a Romance Languages and Literatures secondary student enrolled in the course. She selected “emigrant/immigrant” as her concept for the quilt.

To further the dialogue at the intersection of visual studies and EMR, Spanish 150 welcomed several guest lecturers to speak about their work with the students, including Mexican-born activist and artist Arleene Correa Valencia, whose work is also featured in the exhibit. Correa Valencia finds art to be a liberating vehicle for discussion.

“The visual arts are a way of communicating without needing to actually have a spoken language or a method of communication that is limiting to certain audiences,” said Correa Valencia in an interview with The Crimson. “And when we bring that into an academic space, it’s a tool for a different perspective, of understanding information from a point of view that is not necessarily traditional in academia or numerical in any way.”

Vega-Durán explained that while the scope of the project was initially limited to migration from Spanish-speaking countries to the U.S., the class realized quickly that the exhibit would benefit from accommodating more global narratives — a choice that reflects the class’s commitment to considering new perspectives. Capturing the migrant experience need not be a limited endeavor: In the words of Correa Valencia, art “has the power to traverse borders.”

While Vega-Durán maintains that the small class size is necessary to promote discussion, she hopes Harvard will continue to expand the EMR curriculum. While many peer institutions likewise haven’t done so, 70 schools across the nation — including Columbia University, the University of Chicago, and Stanford University — have already devoted their resources to entire ethnic studies departments. Promoting EMR at Harvard will require support across academic fields.

“It’s complex to think about: How can you have an interdisciplinary department or concentration in a place where you have divisions?” said Vega-Durán. “My goal is to make EMR interdisciplinary. So not to have five different methodologies and courses and say ‘Okay, I have my secondary.’ But, ‘How are they connected? How are we understanding migration in a global or transnational way?’”

Correa Valencia recounted feeling surprised that there was such an engaged audience for her story at Harvard. Vega-Durán stated that the popularity of the EMR secondary has grown consistently recently — a development beneficial for students and teachers alike.

“I think that’s the really great thing about EMR. You teach, but also you learn from the students and you have that thing that is really fulfilling for everyone,” said Vega-Durán.

As for the students, their goal is to foster a dialogue and encourage others to reflect on their personal relationship to the theme of migration.

“The immigrant experience cannot be homogenized. It is so different for every person. This art shows us basically that there are universal elements that are present in migration that recapitulate what it means to be human,” said Kaltchenko. “All of these parts of the exhibit are in conversation and I think the spectator is part of that conversation.”

Visitors can view the exhibit until May 6 in Boylston Hall, which is located in Harvard Yard.

—Staff writer Charles W. McCormick can be reached at @charles.mccormick@thecrimson.com.