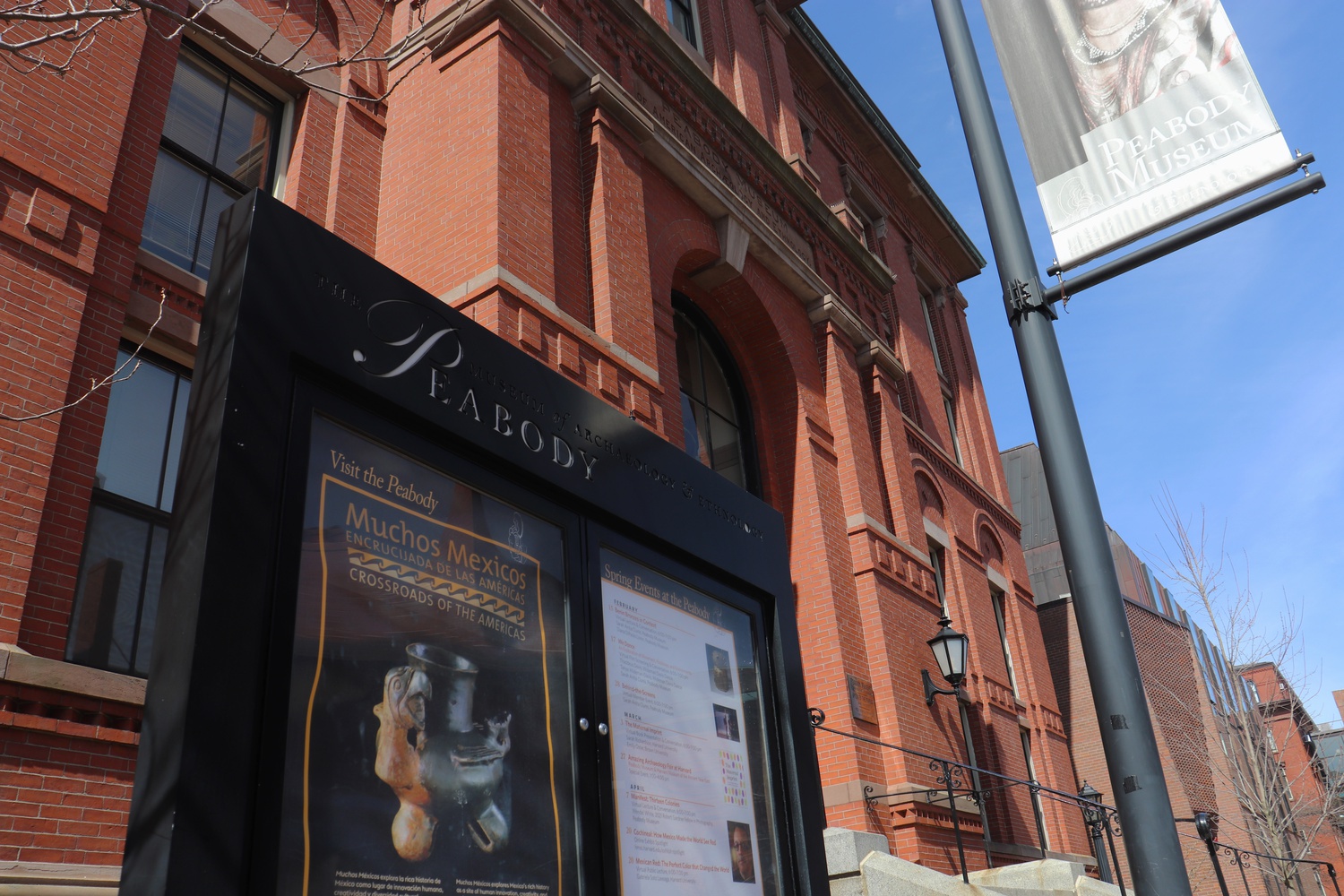 The Peabody Museum of Archaeology and Ethnology was founded in 1866. By Truong L. Nguyen
By Isabella B. Cho, Crimson Staff Writer

For some Nebraska legislators, the whereabouts of Ponca Tribe chief Standing Bear’s pipe tomahawk were discovered as a coincidence.

Charles R. “Dick” Clark, a staff member of state Senator and Oglala Sioux tribe member Tom Brewer, had ordered tomahawk heads as part of an initiative to drive business opportunities for Native Americans in the area. As the two collaborated, their conversation meandered to another tomahawk — that of Standing Bear, the Ponca chief who was at the heart of a landmark civil rights case in 1879.

“We just go Google it up, and it’s like, ‘Huh. It’s at the Peabody Museum for Archaeology and Ethnology at Harvard University,” Clark said.

On June 3, after pandemic-induced delays, a delegation of Ponca Tribe representatives — including Standing Bear’s direct descendent, Stacy Laravie — traveled to Cambridge for the repatriation ceremony. Now back in Nebraska, the tomahawk will remain there and be exhibited.

Director of Cultural Affairs for the Ponca Tribe of Nebraska Richard Wright Jr., who was tasked with facilitating conversations between the Northern and Southern Ponca tribes and Harvard in preparation for the repatriation, said the return indicates a symbolic and spiritual milestone.

“It’s meant everything,” he said. “It’s getting our history back. It’s very emotional in a way, as well. These things belong with the Ponca people. They belong at home.”

On his way to his son’s funeral shortly after being forced to migrate from Nebraska, Standing Bear was intercepted and imprisoned. In the trial that resulted, the Ponca chief’s lawyers requested the judge grant him a writ of habeas corpus.

The case resulted in a landmark decision by Judge Elmer S. Dundy, who, after the U.S. attorney had argued that Standing Bear was incapable of suing the government, concluded that the group of Poncas led by Standing Bear were defined as people under federal law and had a legal right to a writ of habeas corpus.

“To us in Nebraska, that’s a touchstone in legal history like no other,” Clark said of Standing Bear’s court case. “It wasn’t, by any means, the final step or the last step that was needed — but what an important thing to have happened that should be commemorated.”

As a gesture of gratitude following the trial, Standing Bear gifted his pipe tomahawk to the lawyer John Lee Webster, who had represented him pro bono. The Peabody Museum at Harvard eventually acquired the tomahawk in 1982 after it passed through private collections following Webster’s death.

“I know that at one time it was gifted, and that’s where the distinction was made,” Wright said. “It was gifted from Standing Bear, but it was gifted to that individual and their family. And then, as it kind of got passed around and passed around years later, I think it’s right that it comes back to the Ponca people.”

After discovering Harvard housed Standing Bear’s tomahawk, Clark and Brewer went to work, drafting a legislative resolution that urged Harvard to return the tomahawk. Presented by Brewer, the resolution passed the Nebraska State Legislature in a unanimous 49-0 vote.

In writing the resolution, Brewer collaborated with Oklahoma attorney Brett A. Chapman, who is a lineal descendent of Standing Bear. In May 2021, Chapman wrote in a tweet — which has since received over 10,000 likes — that he sent a letter to Harvard demanding the return of his ancestor’s tomahawk, garnering international media attention.

The repatriation of Standing Bear’s tomahawk coincides with a larger push for Harvard to reconcile with museum possessions that originally belonged to Native Americans. In February 2021, the Association on American Indian Affairs penned a letter to University President Lawrence S. Bacow, accusing Harvard of practices violating the Native American Graves Protection and Repatriation Act.

Association Chief Executive and Attorney Shannon O’Loughlin wrote in a June 21 email that although the association is “pleased” with the repatriation, more must be done in light of a draft University report published by The Crimson that said Harvard houses the remains of almost 7,000 Native Americans and 19 individuals who were likely enslaved.

“Harvard claims the Ancestors are unidentifiable, even though there is geographic and other information that would allow Tribal consultation and repatriation to occur under the low proof standards of Native American Graves Protection and Repatriation Act,” O’Loughlin wrote. “Harvard Peabody has no right of possession to these stolen Ancestors.”

Peabody Museum Director Jane Pickering said the museum had been collaborating with tribes across the country both through and outside of NAGPRA guidelines to repatriate objects well before the return of Standing Bear’s tomahawk.

She added that the experience of convening with Ponca Tribe members at Harvard to repatriate the tomahawk was “deeply meaningful.”

“The moment when she came into the space where we were doing the ceremony, there were tears. And I felt really honored to be there at the time,” Pickering said, in reference to Standing Bear descendant Stacie Laravie’s participation in the repatriation ceremony. “It was incredibly meaningful to have that opportunity.”

Wright — who noted that the University houses at least three of Standing Bear’s belongings and 12 other Ponca Tribe items, respectively — said he hopes to continue working with the Peabody Museum to facilitate future repatriations.

“I would definitely love to work with Harvard in the future,” Wright said. “I think what we’ve done here is really history because we’ve set a precedent for the future going forward — not just for the Ponca Tribe, but for maybe all these other tribal nations across the world.”