‘Heroes of the Fourth Turning’ is an Intellectual Obstacle Course 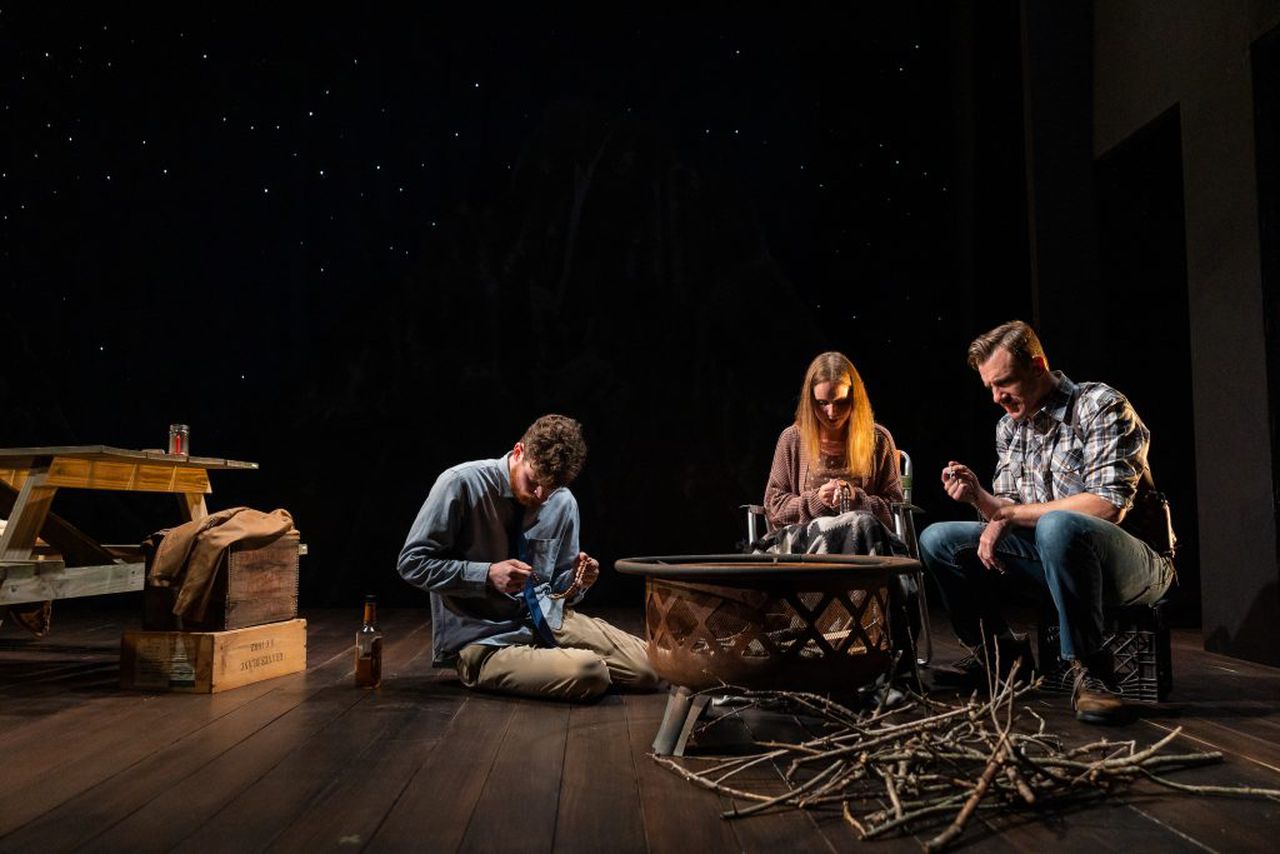 The Speakeasy Stage production of "Heroes of the Fourth Turning" runs from Sept. 9 until Oct. 8. By Courtesy of Nile Scott Studios
By Vivienne N. Germain, Crimson Staff Writer

Directed by Marianna Bassham, the Speakeasy Stage production of Will Arbery’s “Heroes of the Fourth Turning” is rich, raw, and fresh. This bold performance challenges audiences by presenting a surprisingly unconventional way of listening to and thinking about politics, successful due to excellent work with characterization.

Some people avoid discussing politics, race, and religion and others seek to amplify marginalized voices. “Heroes of the Fourth Turning” offers a surprisingly underrepresented and risky approach: listening — really listening — to the perspectives of white right-wing conservatives.

Set in 2017 during the beginning of Donald Trump’s presidency, five Catholic white Republican characters hold the audience’s unadulterated attention for two hours and five minutes, sans intermission, while they argue, disagree, and concur about sociopolitical ideas in the context of religion. The minimal action never leaves its backyard setting, rendering the focus on white right-wing ideas and discourse.

Bassham’s production develops distinct, contrasting, and compelling characters who not only represent different archetypes of white conservatives but also have the depth required for audiences to access them as people with believable emotions and desires, both of which are critical tools for the presumed goals of the play. The actors’ outstanding performances and the simple but effective costume choices contribute to the successful depiction of the characters.

The masterful performances from the actors are complemented by costumes that further emphasize the variety of conservatives represented in the play: a warm and understated cardigan and dress for Emily, a classy pantsuit for Teresa, a flannel shirt and outdoorsy vest for Justin, an untucked and eventually unbuttoned shirt for Kevin, and a neat, mom-appropriate ensemble for Gina. These choices help audiences easily differentiate the characters, which eases the work of differentiating their political positions.

By embracing the differences between these white Republicans, and by humanizing them — which makes audiences more willing to listen to their points — Bassham’s “Heroes of the Fourth Turning” gives viewers a chance to deeply consider hot-button topics from a potentially new vantage point. The characters delve into the nuances of their ideas. They are not just homophobic and transphobic; they push and pull and poke and stretch different aspects of and approaches to homophobia and transphobia until audiences truly grasp their perspective.

Today, after the Jan. 6 insurrection, the overturning of Roe v. Wade, and the Uvalde school shooting — events that had not yet happened when Arbery wrote this play — it seems crooked to listen to people refer to Trump as “the more human” candidate, claim that Planned Parenthood is part of “a system that is evil,” and suggest bringing guns to a school for student “marksmanship training.”

But Bassham’s production neither celebrates nor encourages conservatism or Catholicism. “Heroes of the Fourth Turning” does not push the audience to agree with its characters; it pushes the audience to listen and use that information for whatever purpose — even if just to deepen confidence in liberal beliefs. Examining alternate opinions allows people to better own, grasp, and defend their personal opinions, especially when those alternate opinions are shown in a neutral light.

Audiences will enjoy the humor, the beautiful set (creative lighting combined with a black scrim results in a gorgeous starry night sky effect), and the chemistry and dynamics between the actors on stage — but the greatest impact of Bassham’s production of “Heroes of the Fourth Turning” is its ability to place audiences on an intellectual obstacle course.

—Staff writer Vivienne N. Germain can be reached at vivienne.germain@thecrimson.com.