A Triumphant Return to Berylson: Field Hockey Prepares for the 2022 Season 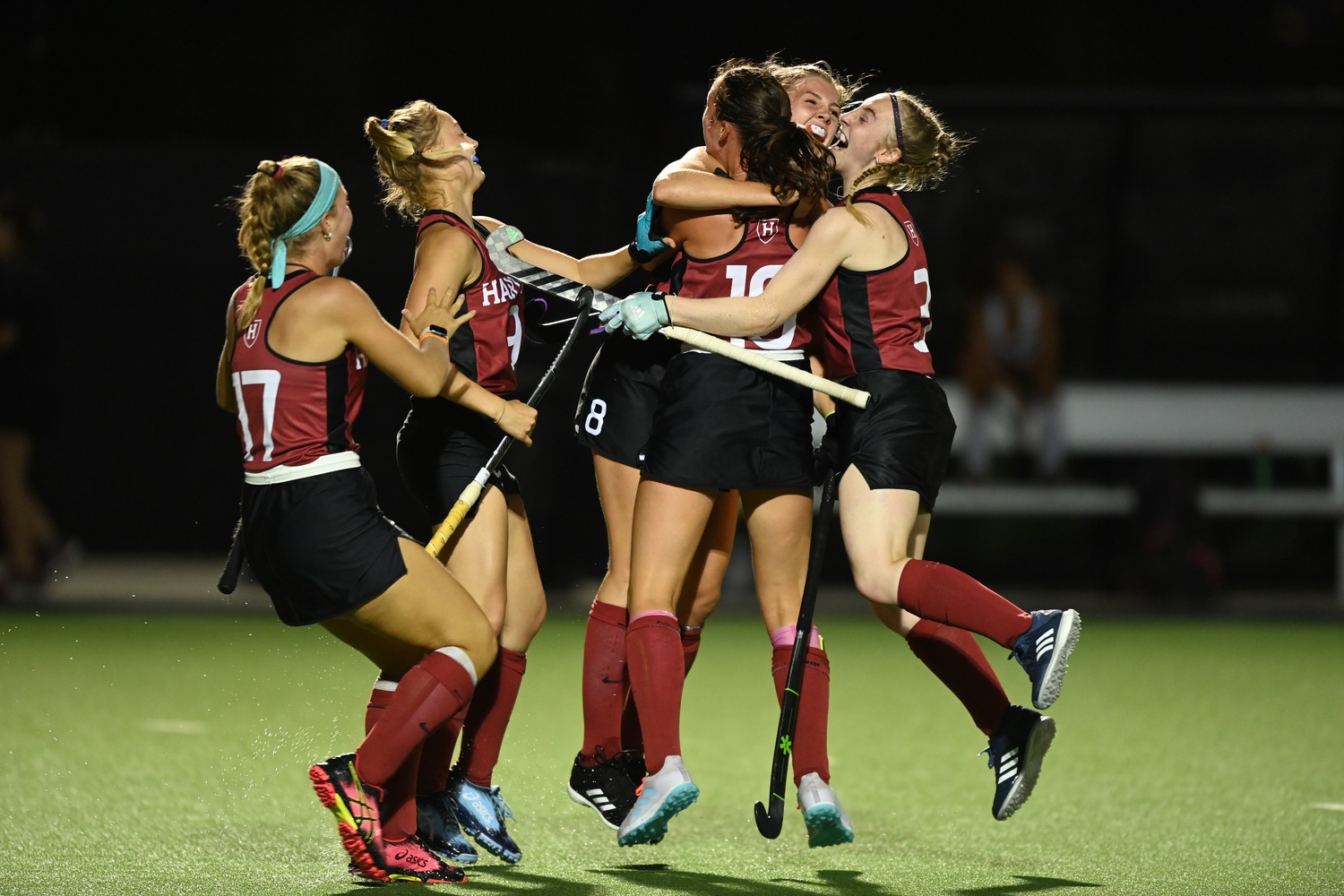 The #7 ranked Crimson field hockey team celebrates after scoring the game-winning goal in overtime in a 1-0 victory over Miami (Ohio) on Friday night. By Courtesy of Harvard Athletics
By Mairead B. Baker

Nearly ten months ago, the Harvard field hockey team walked off Phyllis Oocker Field in Ann Arbor, Mich. as record breakers, making it to the Final Four of the NCAA Tournament for the first time in program history. The team stood undefeated in the Ivy League, beat both No. 2 Michigan and No. 6 Louisville 1-0 in overtime bouts during the tournament, and went 17-2 overall for the entire season.

After its astounding run to the national semifinals, the Crimson is no longer the underdog—it is the team to beat. Perhaps that is the most considerable difference this year: Harvard’s capability to win in major competition is not only sensed among top-level teams but has been proven over and over.

“In the past, we have normally put ourselves in an underdog position while we played top-level teams,” said head coach Tjerk van Herwaarden. “It is a position we really cherish and we were comfortable with.”

“Still,” he added. “Right now, we are happy to be together, excited, but also very focused on another great season, which is definitely a lot more pressure than last year.”

Van Herwaarden’s players now know what they are up against — as do their competitors. Their consistent performances under pressure have created an expectation for success against top-level teams, something that was not present at the beginning of last season.

“People will come to play with a former Final Four team…they will come out to get us,” said the Ivy League Coach of the Year. “I think that is something that will challenge us and change the approach to the game for us…we are ready to take it on.”

But after losing two valuable players from its NCAA tournament run, the Crimson still has a major question to answer: who will step up to lead?

2022 graduates Hannah Pearce and Mimi Tarrant were two dominant players who played key leadership roles in the 2021 season. Pearce was named the Ivy League Defensive Player of the Year and scored the Crimson’s lone goal in the NCAA Final Four game against title-winners Northwestern. Tarrant scored one of the three goals in the penalty shootout that sent Harvard to the semifinals for the first time in program history and played a crucial role in its offense.

“Our leadership has changed quite significantly,” van Herwaarden recalled. “That takes time to grow and takes time to develop. It's a process that will take us all the way into October.”

But the void of these two forces has been filled by the grace of seven incoming first-years—seven players who have already begun to make a sizable impact on the team. Alongside these first-years stands the rest of the strong team who each played a role in Harvard’s nearly unvanquished season last fall. Thanks in part to the contributions of its seven new players, Harvard stands at No. 7 in the National Field Hockey Coaches Association’s preseason poll.

“When big players leave, it creates the opportunity for other players to step up and I think that is what is happening for our team…so that’s really great to see, it's a natural process,” van Herwaarden noted. “To see how it pans out for the whole entire season of course takes time.” 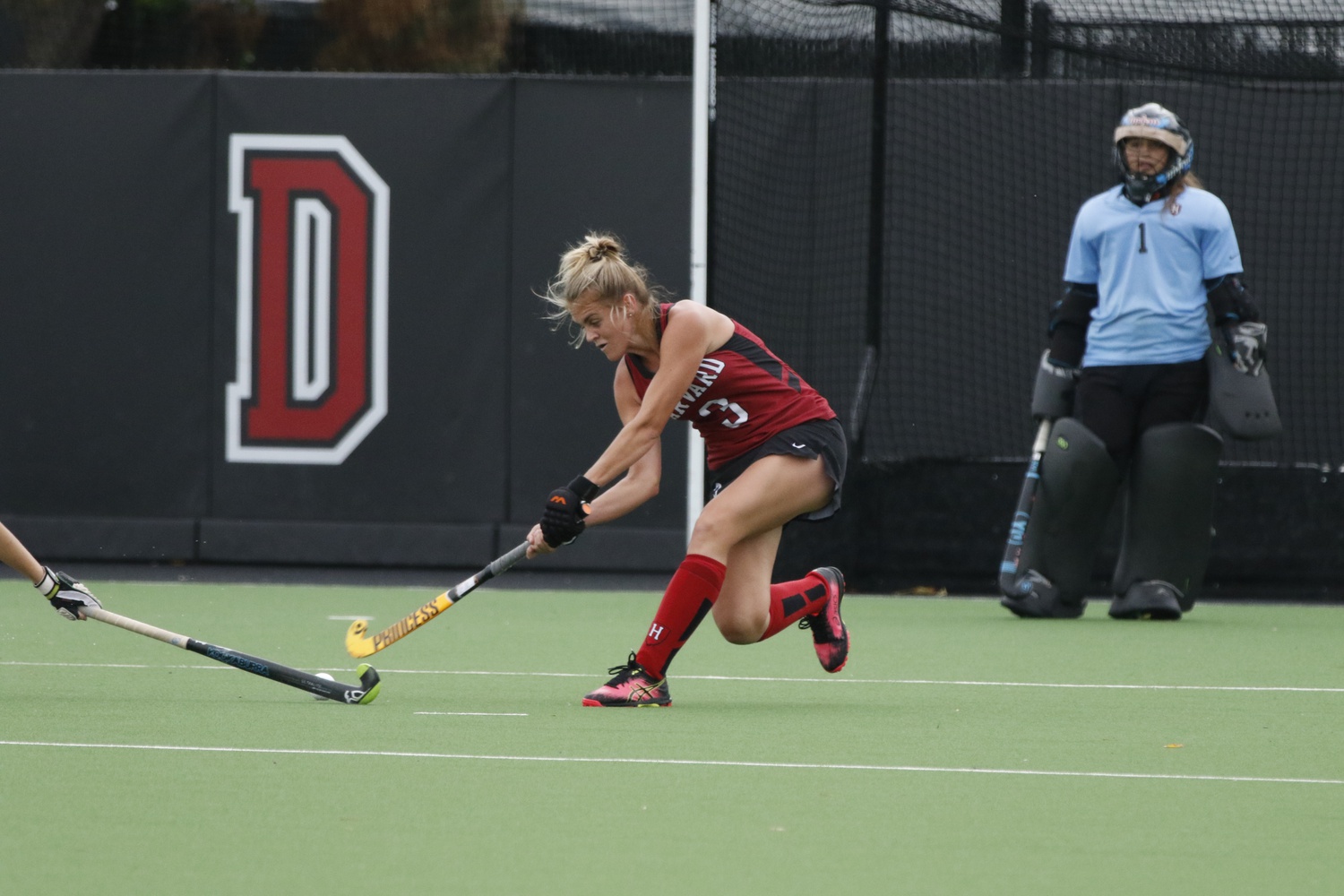 In 2019, then-junior defender Hannah Pearce hits the ball upfield as then-sophomore goalkeeper Ellie Shahbo stands in net. Although Pearce has graduated, Shahbo, now a senior, is the star of another strong Harvard defense. By Timothy R. O'Meara

Preseason training has given the Crimson a chance to adapt to this new mindset—how to approach the game as dominators, with new faces to replace the old ones. This new position will stand as a challenge for the team, but one that it has already started to rally against.

Just on Friday, the Crimson beat No. 24 Miami (Ohio) 1-0 in overtime on a penalty corner kick from first-year defender Bronte-May Brough, who took another three shots at Miami’s net earlier in the game as well.

“[It’s] phenomenal to see them fitting in well and already taking some specific roles on the field, especially in defense,” van Herwaarden remarked.

Hailed as one of the top defensive teams in all of D-I field hockey last season, Harvard’s defense should be strong once again. At the helm is All-Ivy First Teamer Ellie Shahbo, one of the best goalies in all of Division I.

Indeed, on Sunday, the Crimson’s defense was solid, but a late flurry of shots was not enough to make up the deficit against No. 15 University of Connecticut in a tough, 2-0 defeat at home.

“I think that the defense will always be one of our strengths,” van Herwaarden said. “At the same time, as we cherish that and keep working on those things, we of course want to strengthen our attacking unit.”

Some of that offensive strength will come from the incoming class, as well as from players who experienced the breadth and depth of top-notch competition during their NCAA tournament run.

The new challenge for the Crimson is a series of difficult games that will test its talent. Facing more talented teams and gaining new players will, van Herwaarden hopes, allow the team to display its strength once again.

“I can tell you that everybody is really excited, especially with the strength we have in our incoming class plus the experience from last year,” he said. “Time will tell.”

The gauntlet starts immediately, as Harvard will take on fellow national semifinalist No. 4 University of Maryland on Friday, Sept. 9 at 5 p.m., and No. 21 American at 11 a.m. on Sunday, Sept. 11 in College Park, Md.
—Staff writer Mairead B. Baker can be reached at mairead.baker@thecrimson.com. Follow her on Twitter @baker_mairead.