Around the Ivies: Pay to Play, Pay to Write 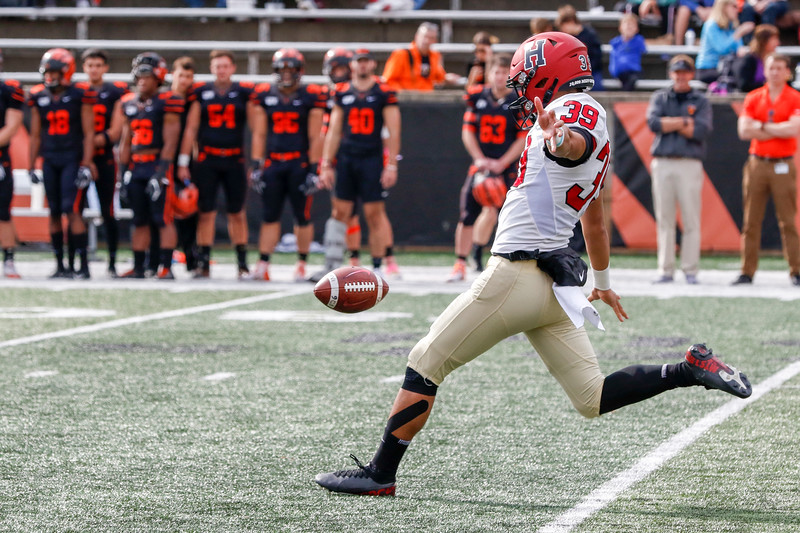 Harvard's special teams has put together phenomenal performances this season, blocking seven kicks in six games and pinning opponents deep into their own territory in each contest. By Timothy R. O'Meara
By Joseph W. Minatel, Crimson Staff Writer

Yesterday, the NCAA delivered bombshell news that it would begin to allow players to profit off of their likenesses. Sports journalists across the country have tried to synthesize what this actually means. We even sent out our own column in order to ride the wave, written by with my fellow sports chair, Henry Zhu ‘20, and myself. We definitely did not want to miss out on this news, had to make sure we could grab a piece of the pie. We tried to answer a simple yet complex question: what does this mean for Harvard athletes? I, however, have an even better question: what does this mean for the college journalists that cover these athletes?

If these student-athletes can make some money off of their likenesses, why can’t I? Student journalists all put in time, and we work hard here at 14 Plympton Street. The building is bustling at all hours, and it is hard to see all of the intense manpower that goes unnoticed. And what do we get for all this work? Student experiences? Resume additions? Lifelong community? Yeah, sure, but I sure noticed that cash money wasn’t on that list whatsoever. Therefore, I announce that my Crimson email and my Twitter DMs listed at the bottom of this page are officially open to advertisers. Come one, come all. I’ll be able to market any product in these articles; it’s amazing that half of this stuff makes it in here anyways. I’ll slip it in just like you can easily slip into Levi’s new flex-fitting jeans! (See?) Sure, you can go after Justin Herbert to market Nike. But you also have me. My reader base includes my parents, my brothers if they have nothing to do in study hall, and maybe even more in the future. Keep an open mind.

What does this have to do with this week’s Ivy League football slate, you may ask? No clue. Let’s get to the picks.

Undefeated Princeton saw its toughest test of the season this past week, winning by only one possession for the first time this season. The Tigers have shown their mortal colors in league play: they have trailed at the half in two of their three Ancient Eight matchups and they allowed points to Brown. Clearly, this Goliath is not invincible.

Fortunately for Princeton, this week’s matchup comes against Cornell. Two weeks ago, I picked the Big Red to top a previously winless Colgate in an upstate New York showdown. The Raiders got its first win in its previous 10 contests. Cornell then played Brown, where I posited that the Colgate game was just a fluke. The Big Red couldn’t possibly drop a game to the lowly Bears. Well, the impossible happened. Cornell only won on a game-winning field goal that clanked off the left post, sealing the game by mere inches. Beating Brown on a game-winning field goal is about as low as a team can go, since losing is basically against the laws of nature. Princeton shouldn’t have much trouble.

Neither of these two teams have played particularly well as of late. Last week, the pair of defenses combined for an even 100 points allowed. While Yale actually won its contest, Columbia understandably allowed its 59 points to the red-hot Dartmouth. The Bulldogs, on the other hand, gave up a head-scratching 41 points to Penn, who has not yet secured its first conference victory. Yale has now given up more than 40 points in two of its last three contests.

This week, the Lions will be heading up to New Haven for what could be a close matchup with the Bulldogs. This trip is possibly very familiar for some of New York’s finest, as reports surfaced this week that Big Apple Mayor and former presidential hopeful Bill DeBlasio used a police detail to chauffeur his son to and from school at Yale. I would possibly pick Columbia if I knew that the team had an NYPD escort. These reports could not be confirmed.

Brown is in an interesting situation once again this week: for the second straight week, both teams in the Bears’ contest will be winless in conference play. This is a unique situation that is sure to never occur again during this season, as these two squads are the last two winless teams in the Ivy League. For the rest of the season, however, I would bet that Brown will play in a game in which at least one of the teams does not have an Ancient Eight victory.

In a tough stretch of the season, Harvard follows up playing the ranked, undefeated Princeton with a matchup against the ranked, undefeated Dartmouth. While the Tigers has not lost since 2017, the Big Green may be the new best team in the conference. Dartmouth hasn’t seemed to have any difficulty the past few weeks, and the Big Green Defensive MachineTM has been aided recently by a high-powered offense that has topped 40 points in three straight weeks.

Harvard, however, has not yet lost at home this season, and played Princeton closer than any team this season. This game is far from over, and Dartmouth would be foolish to look ahead to next week’s matchup with Princeton in Yankee Stadium. Although I’m sure it’s exciting even a week away for New Yorkers, as the baseball venue has been mostly empty for some time now. With my Cubbies out, I'm pulling for the underdog. Go Nats.