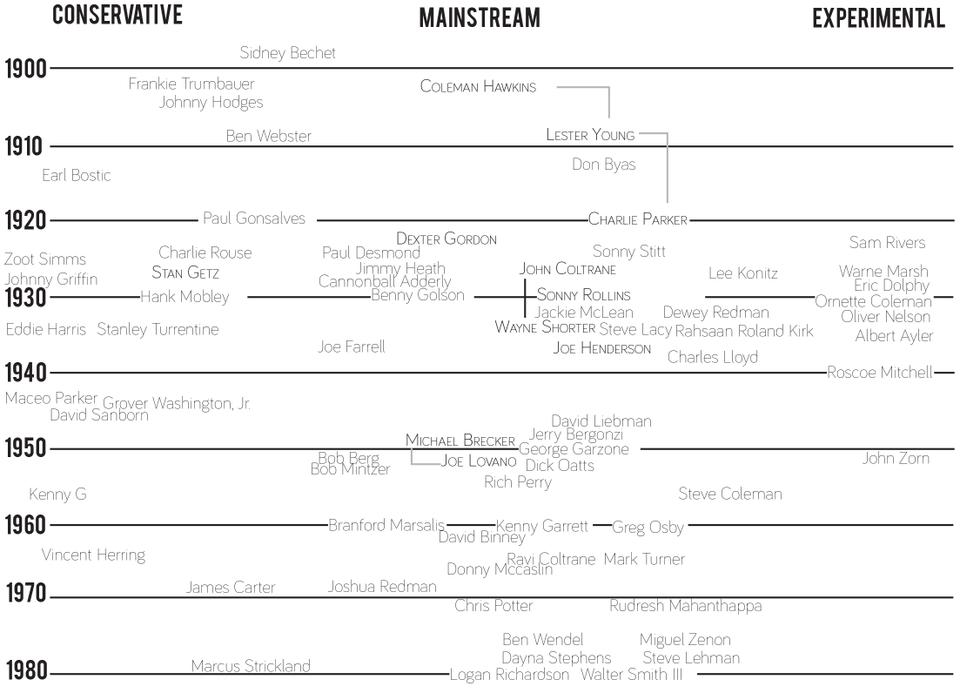 Do you see anything problematic about the above jazz saxophone genealogy?

Unlike a hereditary genealogy, artistic genealogies are practically impossible to draw convincingly. Art doesn’t move through time in a straight line; it doesn’t even move forward or backward as we conventionally understand what comes before or after. And pairings and confluences of influence occur all the time that would be temporally impossible in hereditary genealogy, made possible by recording technology: the great-grandson might be partially begat by his great-grandfather, but also by his once-removed great-uncle. Tracing the line of influence for an artist is more often than not tracing the knotted tangents and incestuous, polyamorous ties that contribute to the emergence of an individual voice.

I don’t presume to be anything more than a student of the jazz saxophone tradition, but in my few years of study I’ve benefited immensely from drawing my own map of the historical territory. Of course, ignorance and misinformation are par for the course, but it’s been an invaluable exercise to try to orient myself while navigating the unspeakably diverse collection of voices that define the legacy of the jazz saxophone. Please forgive any omissions on my part; some saxophonists I left out intentionally for the sake of space, and many more I’ve left out simply because I haven’t gotten hip enough for them yet.

The typical story is that Coleman Hawkins and Lester Young came together as contrasting influences—r and Lester Young as a rhythmic and stylistic innovator—and begat Charlie Parker, the symbol and definitive voice of bebop in the ’40s, alongside Dizzy Gillespie, until Parker’s death in ’55. Hawkins had already been the dominant voice on his instrument, the tenor saxophone, when Lester Young emerged as a leading soloist in Count Basie’s big band in Kansas City (c. 1933).

I tend to associate Hawkins with a number of other tenor players of the era who played with an explicitly forceful swing feel and a rather heavy, expansive tone with a generous amount of vibrato in their sounds: Don Byas (also an influence on Parker), Ben Webster, and later Paul Gonsalves come to mind. Young, who had a buoyant sense of time that was just as propulsive as Hawkins’s but less explicitly so—achieved through the rhythmic motifs and syncopations within his lines rather than in the articulation of the notes themselves—is generically described as having a light, airy sound with almost no vibrato, i.e., a “cool” counterpart to Hawkins’s “hot” sound.

While Charlie Parker was indisputably the first proponent of bebop on the alto saxophone, Gordon is generally considered the first leading player of bebop on the tenor saxophone. He was also influenced heavily by Lester Young’s sense of melody and time, and he used far less vibrato than either Young or Hawkins; his sound is also harder, more square than round compared to his tenor antecedents, which would be a hallmark of his legacy in the tradition of the tenor saxophone sound.

Although John Coltrane was born before either Sonny Rollins or Stan Getz, his emergence as an innovator and leading saxophonist of his generation came relatively late behind Rollins and Getz. In fact, although they were all peers, Rollins and Getz were each initially major figures with whom Coltrane had to contend when developing his own approach and his own sound. Rollins grew up in Harlem in the ’30s and ’40s among both peers and older figures, including Hawkins, and by 21 was recording the next generation of bebop with Miles Davis. His indebtedness to Charlie Parker’s rhythmic and harmonic innovations is undeniable, and he’s generally considered the tenor saxophonist whose approach to rhythm was most similar to Parker’s own.

Stan Getz came up through Woody Herman’s big band in the late ’40s. He had his big break after his solo on the ballad “Early Autumn,” which made him a household name.  A musical descendant of Lester Young with regards to tone and melodic phrasing, Getz and a number of other white saxophonists of the era (Zoot Sims, Al Cohn, Jimmy Giuffre, Paul Desmond) are often lumped together, but each diverged towards separate paths as they matured. Coltrane is famously quoted as saying of Getz, “We’d all sound like that if we could.”

There are early recordings of Coltrane playing alto saxophone during his years in the Navy. His playing is a poor imitation of Charlie Parker’s, and there is no sense that this musician would later become, arguably, the most influential jazz musician of the past 50 years. When he replaced Sonny Rollins in Miles Davis’s band in the ’50s, critics almost unanimously registered their dissatisfaction with this largely unknown saxophonist, who they criticized for unsophisticated harmonic choices and general inconsistency of playing. But between ’57, when he recorded “Blue Train,” and ’59, when he recorded “Giant Steps,” Coltrane’s harmonic innovations thrust him to the forefront of saxophonists, where he maintained a monolithic presence until he succumbed to liver cancer only a decade later.

In the post-Coltrane era, Joe Henderson and Wayne Shorter emerged as major instrumental stylists and composers of the ’60s—Henderson, whose melodic and rhythm approach synthesized Coltrane’s recent innovations but derived fundamentally from the Lester Young lineage, and Wayne Shorter as initially a Coltrane imitator who quickly transcended that label by developing an idiosyncratically mysterious and nonconventional approach to composition that broke traditional expectations for harmony and form.

In the ’50s, a generation of predominantly white saxophonists influenced by Coltrane and Rollins was born. Michael Brecker, who pushed the technical bounds of range and velocity, was one major pole of influence with his bright, laser-focused sound (Bob Mintzer and Bob Berg are two sonically sympathetic peers). Joe Lovano is perhaps the other most visible saxophonist of that generation; his harmonic language is just as sophisticated as Brecker’s, but he presents this information in a way that more explicitly synthesized these technical innovations with an aesthetic recalling the pre-WWII tenorists. Rich Perry, Dave Liebman, Jerry Bergonzi, and George Garzone are peers who each developed highly idiosyncratic styles.

In the ’60s, saxophonists who would come of age in the Young Lion era of the ’80s, were born. The Young Lion era was the era of a neo-traditional revival represented by Wynton Marsalis, which was really just a return to the mainstream acoustic aesthetic of the ’50s and early ’60s, prior to innovative projects in the late ’60s and ’70s that incorporated electric instruments, rock and other emerging American music, and non-Western musical influences. In my mind, alto saxophonist Kenny Garrett and tenor saxophonists Mark Turner and Chris Potter have been the most influential to saxophonists of my generation and the generation before.

A new generation of saxophonists born in the ’70s has begun to displace the otherwise overwhelming mainstream influence of Mark Turner, Chris Potter, and Kenny Garrett. I’d count Miguel Zenon, Ben Wendel, and Walter Smith III as three of the most visible today—again, an altoist and two tenorists—but other innovative saxophonists like Rudresh Mahanthappa, born the same year as Potter, are only lately receiving their due from the mainstream jazz press.

This problem of delayed recognition greatly complicates any reasonable approximation of saxophonic influence; for instance, even though Mark Turner is now one of the most widely imitated saxophonists for his dry, stoic sound and harmonic ingenuity, he only became well-known in the late ’90s—long after Garrett, Joshua Redman '91, and others had been important figures on the mainstream jazz scene.