Football Island: The Hunting Ground for Our Samoan Brothers 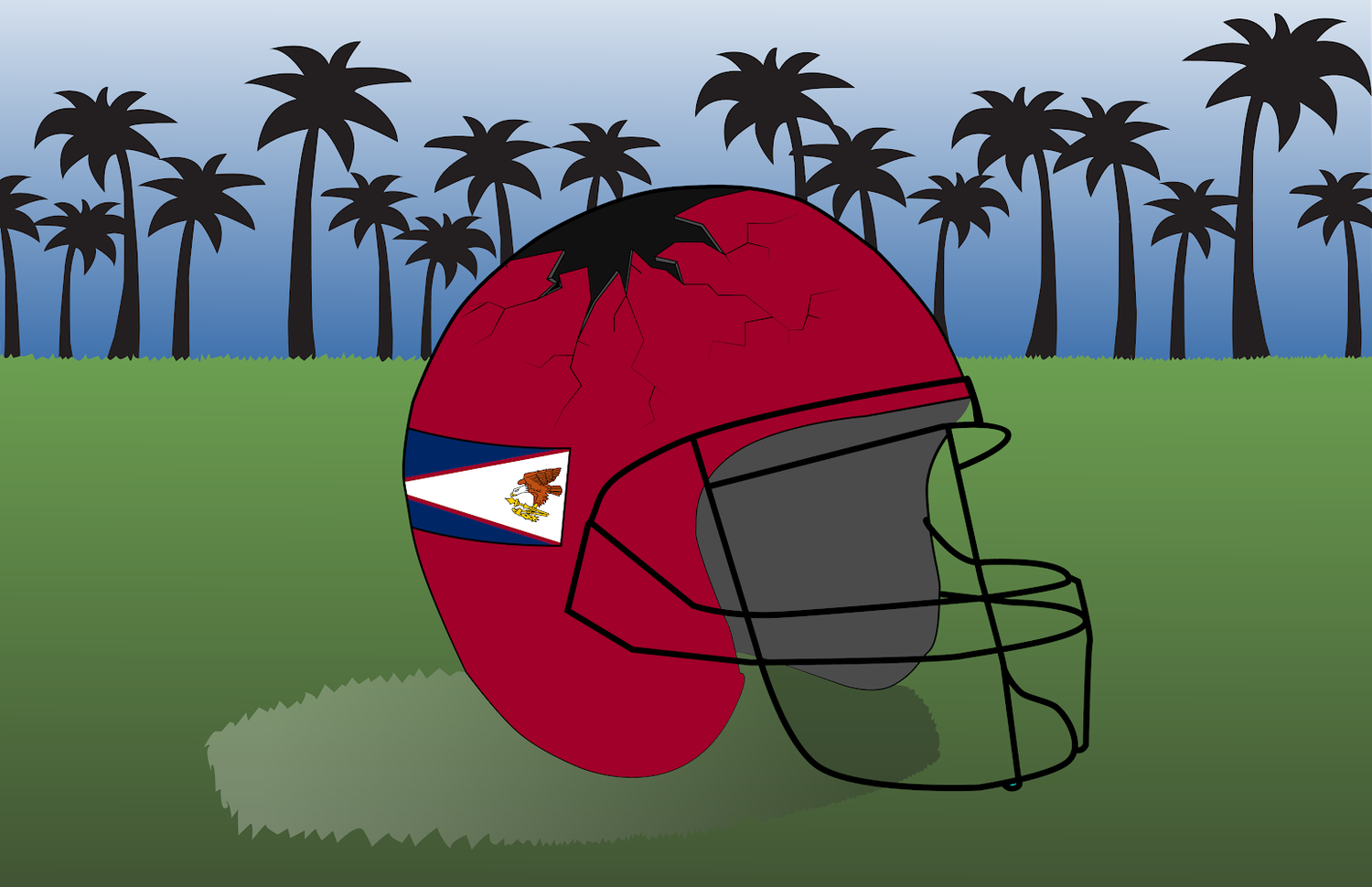 Last month, as I sat in my common room surrounded by pizza boxes and blockmates impatiently waiting to watch Shakira and Jennifer Lopez perform at the Super Bowl LIV halftime show, I could not help but think of home.

As the teams ran onto the field, I was taken back to high school where my Samoan brothers would assemble to perform the haka before games, trying to intimidate the other team. With every touchdown, all I could hear were the raucous drums and the deafening “Cheeeehoo!” that would erupt from high school students that used to, and still continue to, pack Veterans Memorial Stadium every weekend. And with every big tackle I watched these professional players make on my TV screen, I could feel my Samoan brothers bodies taking impact after impact, protected only by old, used helmets and shoulder pads.

Football is the biggest sport in American Samoa. According to the Wall Street Journal, “no other segment of US society produces as many [professional] football players per capita.” With American Samoa located nearly 6,000 miles away from the United States mainland with a population under 60,000 people, it’s insane that Samoans make up about 3% of the NFL — about 50 players, nearly 40 times Samoans’ proportional share of the U.S. population. In fact, big-time American sports agent Leigh Steinberg estimated that, “A Samoan male is 56 more times likely to play in the NFL than an American non-Samoan”. And even outside of the NFL, there are around 300 Samoans playing in Division I collegiate leagues throughout the U.S.

While football has undoubtedly provided a pathway towards success and upward mobility for many in our community, we must reevaluate the effects of this dominant narrative of American Samoa as “Football Island” and the idea of our Samoan brothers as being “built for football.” Who do we exclude in this narrative? Who is being exploited? And who, in the end, is really winning?

The dominant narrative in the media is simple. American Samoa is “Football Island” and nothing else. In each article, story, and documentary short, the idea of Samoan men as being born for football is perpetuated by the stereotype of Samoans as “heftier…[and] genetically predisposed to developing the sort of bulky frame that’s ideal for linemen and linebackers.” This racist stereotype endangers Samoans by automatically putting them in the most physically dangerous positions on the field, dismisses the diversity of Samoan bodies, and lends itself to more racist assumptions about the “fa’asamoa” (or Samoan way of life) as only embracing and being centered around “physical competition and conflict”. This gross mischaracterization of our complex culture — one premised on the values of family, love, respect, and discipline — only further perpetuates harmful representations of Samoans, especially Samoan men, as primitive, incompetent, and even savage.

Crazy statistics about our overrepresentation in the NFL and stories of individual success, like Troy Polamalu, Marcus Mariota, and Tua Tagavailoa, just to name a few, are emphasized to hide these racist undertones. And with a significant proportion of children in American Samoa living in families below the poverty line, football has long been seen as the “best path to an affordable college degree, which leads in turn to prized jobs in the island government.” This dynamic excludes Samoan women and non-football players from the same access to higher education and the same chances for upward mobility, helping to reinforce toxic masculinity and other systems of gender oppression in American Samoa.

But perhaps the most egregious consequence of our deep dedication to football is that it puts our Samoan brothers’ at some of the most vulnerable positions on the football field without equipping them with the proper resources and education about the risks of playing the game.

Often times, the fields that young players back home practice on are unleveled and unsafe, and much of the equipment, such as helmets and shoulder pads, do not meet basic safety standards. Not only this, but training and education about concussions and other mental health risks for both players and coaches is not extensive or rigorous enough. Even in light of the tragic suicide of Samoan NFL player Junior Seau, due to his suffering from chronic traumatic encephalopathy, also known as CTE, there is still a blatant disregard not only for our young upcoming Samoan football players’ mental health, but even that of those who are professional and have access to adequate healthcare and resources.

Let me make clear that I do not blame any of my Samoan brothers for playing the game. I’ve seen it bring a pathway to education, to financial stability, and to a greater sense of family, especially for my brothers who have lacked that sense in other parts of their lives. But, is it worth the perpetuation of racist stereotypes that continue to subjugate our people? Is it worth the exclusion of our Samoan sisters from the same pathways for upward mobility and their consequent oppression? Most importantly, is it worth our lives?

Gabrielle T. Langkilde ’21, a Crimson Editorial editor, is a joint concentrator in Sociology and Studies of Women, Gender, and Sexuality in Eliot House. Her column appears on alternate Fridays.